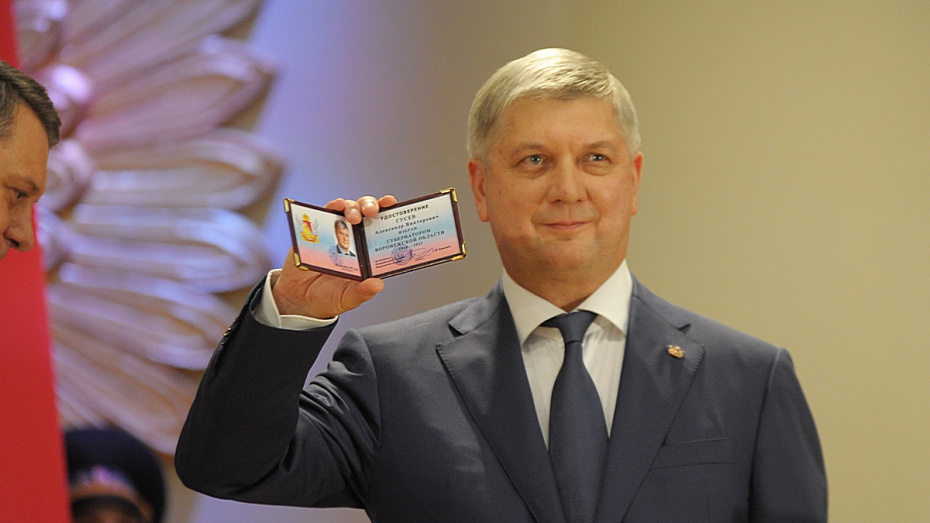 The inauguration was held on the City Day.

Elected Governor Alexander Gusev swore to the residents of the Voronezh Region. The inauguration, a solemn procedure of taking office, was held in the building of the Regional Government on the City Day, on Saturday, September 15.

Traditionally, the ceremony took place at an extraordinary meeting of the Regional Duma. It was attended by Presidential Plenipotentiary Envoy to the Central Federal District Igor Schegolev, Deputy Chairman of the Federation Council Galina Karelova, the State Duma deputies, representatives of executive authorities of the Voronezh Region and local government bodies, as well as honorary citizens. 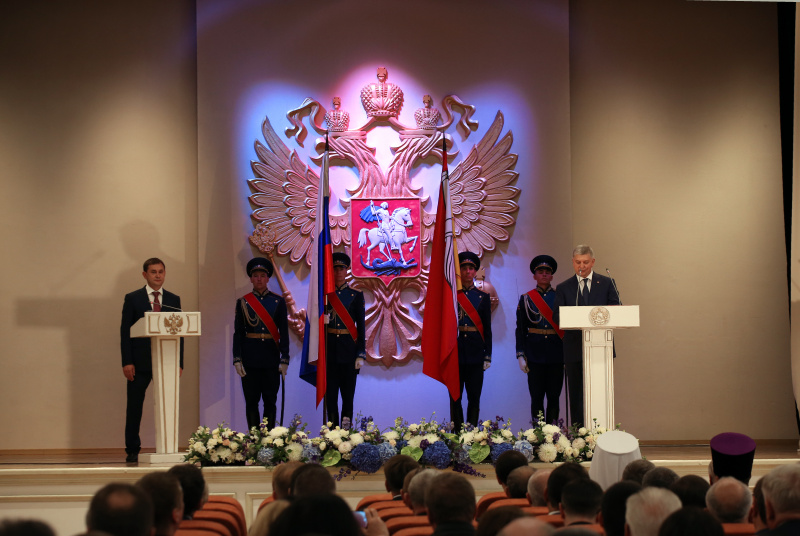 Photo – The Press Service of the Voronezh Regional Duma

The Constitution of the Russian Federation, the Charter of the Voronezh Region and the text of the oath were brought into the hall. 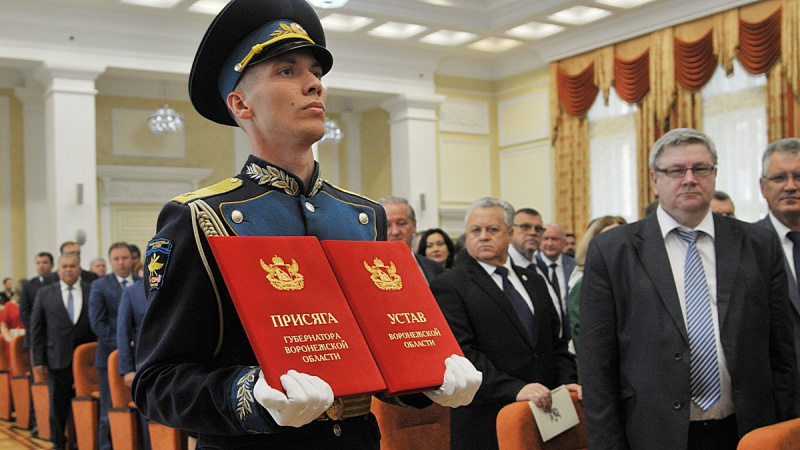 – On behalf of the President of the Russian Federation, I congratulate you on your convincing victory in the elections. A little less than a year has passed since you were acting as Governor. You have held high and responsible positions for many years. The residents of the region have had time to evaluate you both as a person and as a leader. The results of the elections show that your efforts for socio-economic development of the region have found support among the residents.

Presidential Plenipotentiary Envoy to the Central Federal District stressed that the Voronezh Region is among the leaders in the social and economic situation. He appreciated Alexander Gusev’s initiative to create a special economic zone, as well as the construction of kindergartens, the development of the health care system, which is a prerequisite for the well-being of the region. In conclusion, Igor Schegolev congratulated Voronezh residents on the holiday.

– First of all I want to express my gratitude to the Voronezh people for their choice. It is a great honor and responsibility for me to become the Governor of a large region, the Voronezh Region, Alexander Gusev said. – Implementation of our plans will certainly be promoted by the region’s leading starting positions. 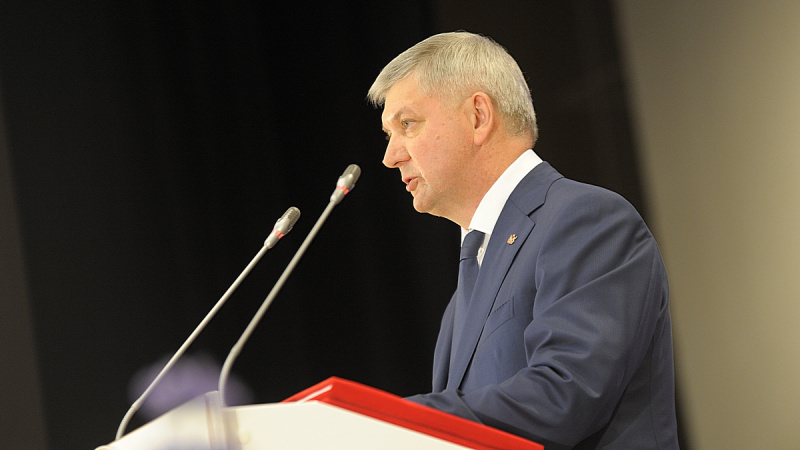 Alexander Gusev added that the plans include to increase investment, active interaction with business and society. He pointed out the need to use innovative technologies, intellectual approaches in the development of the region. He also pointed out the importance of orientation to public opinion in decision-making.

– Priority should be given to the quality of life. All the social tasks that have been started will be continued. New ambitious tasks have been set. The region has declared its participation in all national projects, Alexander Gusev said.

The head of the region noted that it was necessary to modernize the authorities. He intends to make the administrative system open and effective and his main task is to “consistently form a favorable environment.” Alexander Gusev is “sure that only this basis will enable to implement everything planned, to become the best territorial entity of the country.”

Metropolitan Voronezh and Liskinsky Sergius congratulated, blessed the new Governor and presented him with the icon of St. Mitrofan of Voronezh. 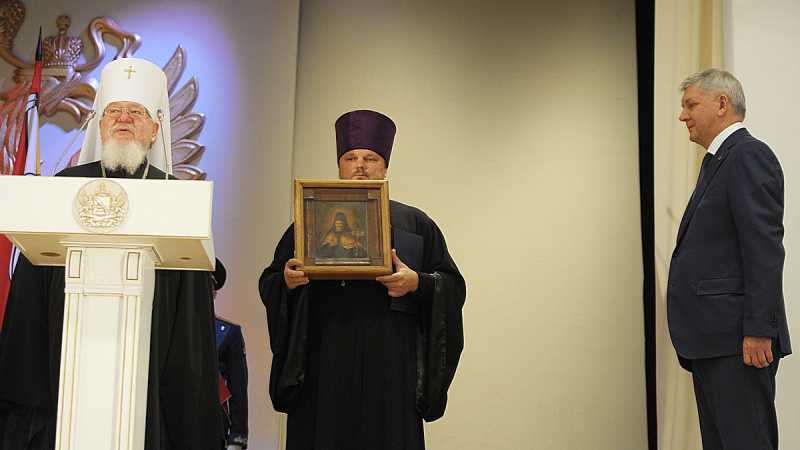 – Today, the ceremony of the solemn inauguration of the Governor of the Voronezh Region, Alexander Gusev, took place. Alexander Viktorovich received the support, the residents’ trust. People of the Voronezh Region associate their hopes for improving the quality of life, prosperity, welfare with him, Vladimir Netesov noted in an interview with reporters. – Alexander Gusev’s program was supported by the population of the region. This is a clear program for the development of the region’s economy, attracting investment, creating jobs and realizing the potential of the Voronezh Region. The main emphasis in the program, I believe, is on the development of human capital. This is the life expectancy, democracy, better quality of medical services.

Vladimir Netesov added that the Voronezh Region continues its sustainable development, a stable political environment remains in the region, positive changes are taking place in the economy, small and medium businesses, construction of schools, kindergartens, cultural, health care and sports institutions continues. The region takes the leading positions in many areas of agribusiness, industry and social sphere not only in the Central Federal District, but also in Russia.

– I am sure that the course on the leading positions of Voronezh will be continued. The deputy corps of the Regional Parliament together with the Regional Government will continue to systematically work to develop the economy, increase the investment attractiveness of our region and improve the quality of life of the Voronezh residents, the Regional Duma Chairman concluded.