"The future engineering Big League of Russia." What was presented at Roboart in Voronezh 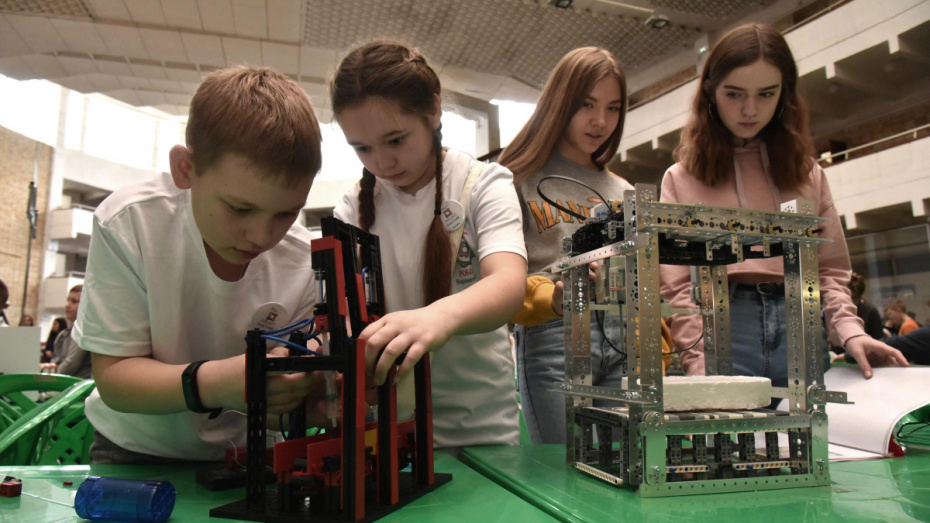 The Roboart Festival was held in Voronezh on Saturday and Sunday, March 14 and 15. The forum involved over 1 thousand children. RIA Voronezh correspondents saw the works of young engineers and learned how robotics was developing in the region.

Who came and what the audience saw

Roboart has gained international status. The event involved young technicians from 22 regions of Russia and Kazakhstan. They presented medical, industrial, transport, and entertainment robots they made with their own hands to the experts. The viewers also saw kirigami, kinetic sculptures, unmanned aerial vehicles, and also Goldberg machines - devices that perform a simple action in a complex way based on the domino effect. Also, children introduced their cartoons on the “50 years later” topic and participated in masterclasses held by construction set designers, listened to lectures by teachers and programmers. The first day of the festival was held at the Palace of Children and Youth Creativity. 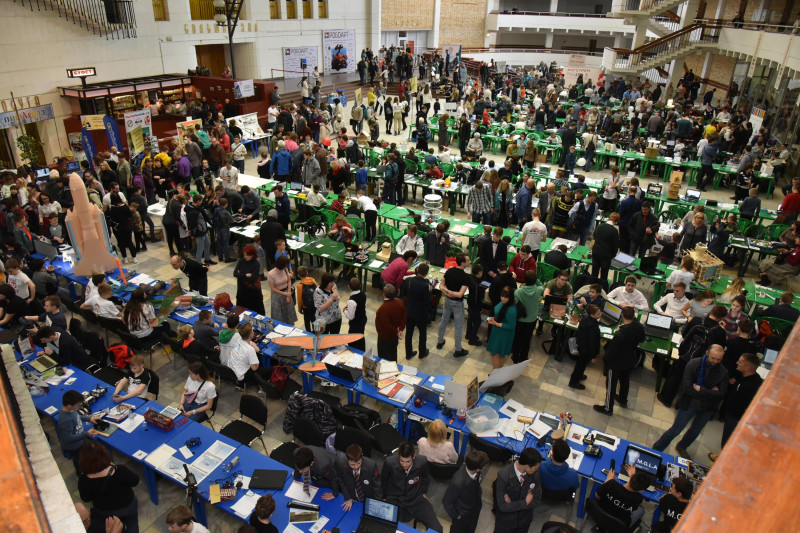 According to experts, the festival included projects that were ready for being launched into mass production. One of them is a portable milling machine, which was introduced by a student from Kuznetsk, Daniil Stolyarenko. The development took three years. The universal machine weighs only 12 kg; it is safer than the mechanisms installed at industrial enterprises. The boy’s engineering genes come from his dad who works as a car mechanic. Daniel’s machine tool combines four elements - programming, engineering, 3D modeling, and radio electronics. 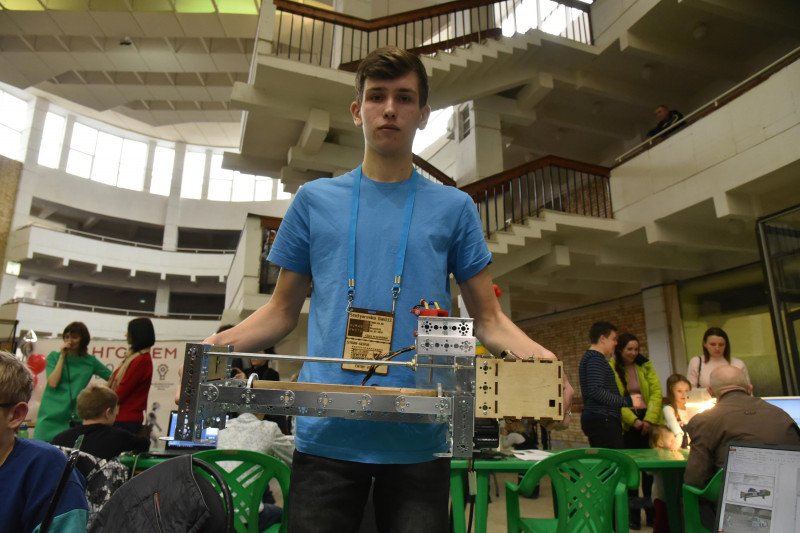 “Russia mostly produces Soviet-like machine tools that weigh 8 tons each and cost 1.5-2 million rubles. I think not everyone needs these. The cost of my machine is about 10 thousand rubles, but I must admit that some parts are the property of my school. The project has already found a response, this machine can be delivered to school classrooms, technical education institutions. It is safe, it can be controlled even via Bluetooth. Now I’m looking for an investor who will finance the development of my project. As for what to do next, I haven’t decided yet. I don’t know which university to enter. I have too many interests, it’s hard to choose,” Stolyarenko admitted.

Tenth grader Alexander Alyaev from Penza presented a physical experiment with augmented reality. He developed a smartphone application that allows you to visualize experiments conducted in physics classes. 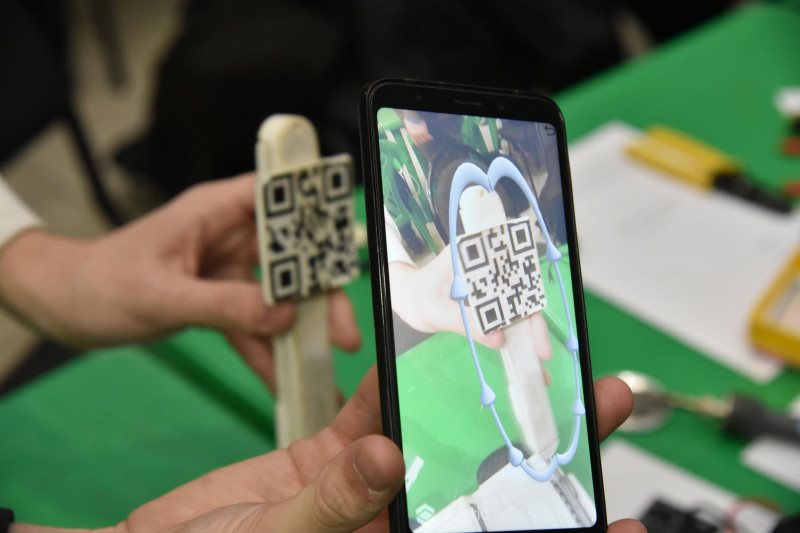 “At our lyceum, we need to submit a new project every year. The last time we developed a greenhouse that grew plants without soil. For plants, the soil is just an environment that supplies them with nutrients. This is why in our case the roots were in the air, they were automatically sprayed with a solution of potassium humate, water, and mineral admixtures,” Alexander explained.

The SelyankiNEXT team from Nizhny Novgorod presented a prototype of the Harvest LA-82 autonomous automated agricultural complex for collecting grain. It cuts the wheat heads and frees them from grains in a cleaning compartment. Excess moisture is removed from the grains, after which they are poured into a removable container, and the waste is dumped back into the soil as fertilizer. According to the girls, their Bluetooth-controlled complex is 25% more effective than the technology that is currently used in Russia. 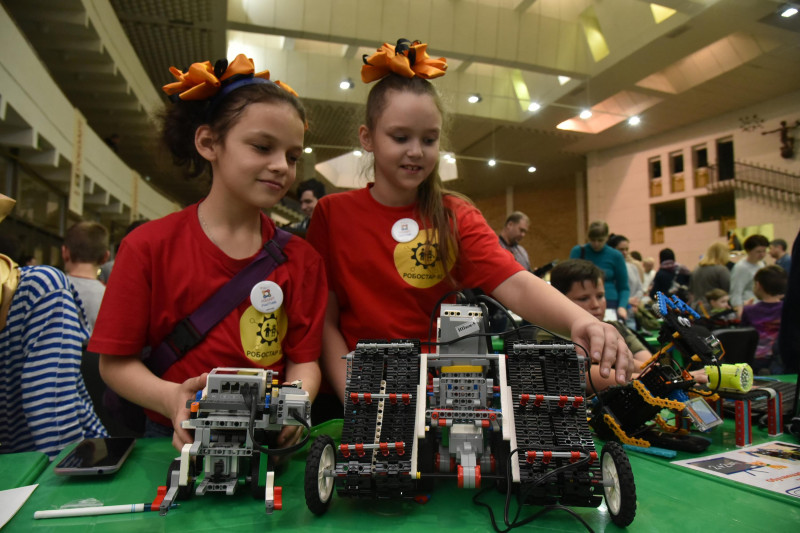 Daria Semina from Liski introduced a prosthesis printed on a 3D printer. She has already presented it in the State Duma and the 2019 International Aviation and Space Show (MAKS). The project aroused great interest among representatives of Italy, the UAE, and Peru. 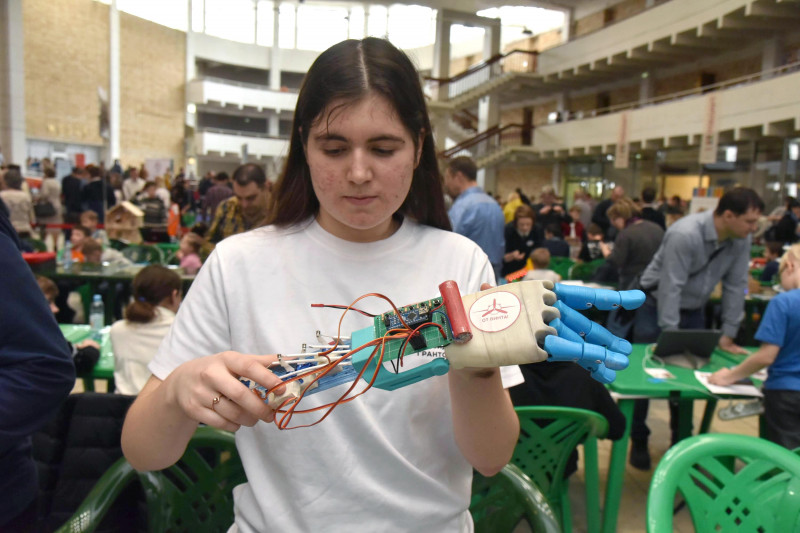 “In Russia, they have been developing prostheses made on 3D printers for several years, but then they stopped. And I am convinced that this technology has an advantage. Firstly, an ordinary bionic prosthesis cannot be copied; it is unique. And in our case, the 3D model is saved, it can be printed more than once. In addition, our prosthesis will be much cheaper. With all the electronics - a servo-drive and an Arduino controller - our prosthesis can cost about 20 thousand rubles. And the cost of an individual prosthesis starts at 80 thousand. People often wait months for their turn in the surgical department. In addition, our development can help children who have lost a limb. While the child is growing, it is wasteful to order an individual prosthesis, because children grow and the size of their limbs increases. Our project will solve this problem. And it can be developed further - by placing a sensor to control the prosthesis via voice commands. But the main thing that still needs to be worked on is pulling force. For now, the prosthesis can only hold something light - a glass of water, a banana,” said the schoolgirl.

Anna Vasilyeva and Yelizaveta Popikova from the Ostrogozhsky Center for Children's Creativity presented a prototype of a robotic system for monitoring the ecological state of a water basin, which is easy to mount on a catamaran. 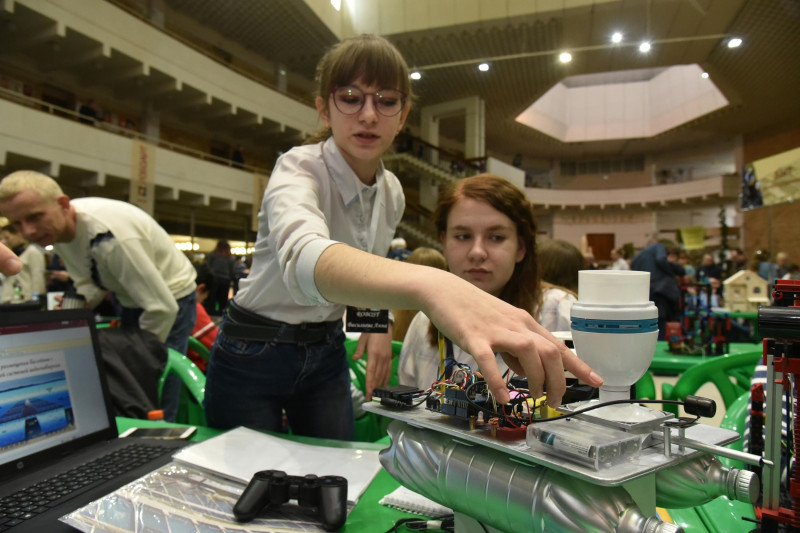 “Fish of different types and development stages need different temperature regimes. The system allows you to monitor this, the information is transmitted to the operator, who independently decides whether to change the temperature or not. This is for water basins used in fisheries. So far, these farms have been developed only in the Far Eastern cities - in Russia, this is considered an expensive production type due to the fact that you have to keep large personnel. Our system allows for reducing these costs by minimizing the human factor. One operator will be able to monitor everything. You can add a camera, a sensor for the indication of hydrocarbon gases. In a pond, there can be rotting and decomposition processes during which methane is produced. The system allows you to track this,” the girls noted.

And Maria Chernova and Georgy Belyanin developed a smart home project designed for people with disabilities. 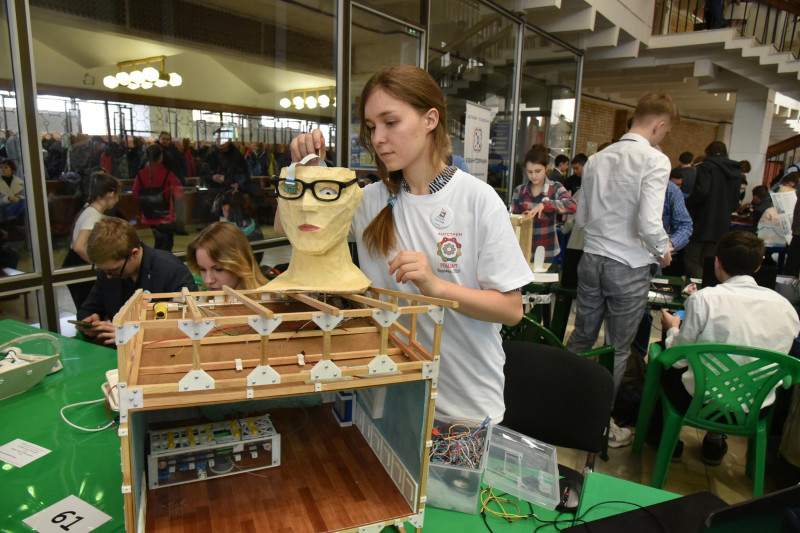 “It can be controlled by a paralyzed person who can only blink. He can lie on the sofa wearing glasses with a camera that reads his blinks. By quickly blinking twice he chooses the action. This way you can turn on the light in the room, close the curtains, raise the headboard,” the young engineers explained.

The work of young talents was evaluated by 50 experts - university professors and representatives of urban enterprises.

“There was a time when school teachers evaluated the work of children, but they could not ask such questions as university teachers, industrial workers, or company engineers could. Now, children receive tips that can help them improve their inventions. When the head of a university department or the chief mechanic of an enterprise talks to young technicians, is very valuable,” said Roboart organizer Alexei Fedotov.

The second day of the festival was held at the Voronezh State University. The robots and their owners competed in passing the maze, racing in a straight line, in a knight tournament, bowling, extinguishing a fire simulated by a lamp, and dancing.

“We are unique in the fact that we have no selection process. Everyone can participate. What’s important is not the place a child takes but that talented children gather under one roof, see each other’s ideas, communicate, and continue to create. This is especially important because many children from rural schools come here. They have no environment, they have only the Internet. But that’s different. A child develops when someone close to him is engaged in the same thing, when there is live communication,” the experts said.

How robotics is developing in Voronezh

“The parents of young engineers need to carefully study the website of the organization they took interest in. Be sure to check if it is licensed, to collect some feedback. Everyone begins their engineering journey via construction sets that provide them with ready-made blocks. Having played enough, they start to understand that they are more interested in - programming, 3D-modeling or something else. At this point, the figure of the teacher who directs the child is of great importance,” said Fedotov.

This trend is being developed by several budget organizations in the city including the Quantorium, the Sozvezdie (Constellation) Center, the Young Technician Station № 3, Technograd, the Children and Youth Center, and Realnaya Shkola (Real School). There are a dozen private organizations in Voronezh, among them the Experimental Technical School and Pifagrad are worth mentioning. In budgetary institutions, children study for free, while in private ones, parents pay an average of 3,500 rubles per month. Both state institutions and “private traders” have their own problems. Not all private educational organizations have a license to carry out educational activities - some of them are even cooped up in apartment-type offices. Municipal institutions, in their turn, have a shortage of teachers with the appropriate competencies. 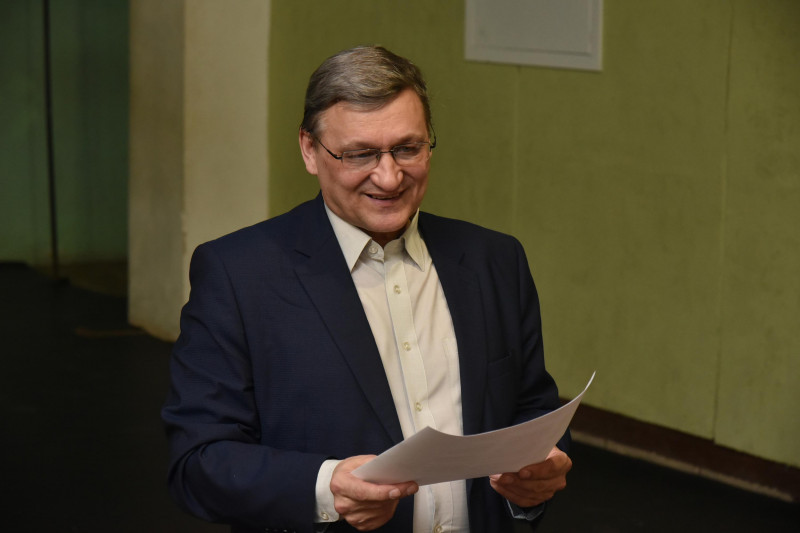 “Non-governmental institutions and organizations can receive budget funding, the laws allow it. But there is virtually no money. Even organizations included in the relevant register do not have budget funding. For two years now, the officials have been saying that the procedure that will allow the transfer of funds has not yet been developed. Municipal schools receive money because giving it to them is easier - they are easier to control. But some of the "private traders" are much better at teaching. Why do parents of some children pay while others do not? Granted that the state supposedly provides an opportunity to help those who work efficiently. We, for example, are a non-profit organization, we have no concept of profit. We can buy equipment, reward teachers –otherwise we cannot use the money, the Ministry of Justice strictly monitors all this,” explained director of the Experimental Technical School Alexei Fedotov, who became one of the initiators of the Roboart Festival in 2015.

The teaching of the basics of robotics is now often found in municipal secondary schools. In some of them, there are good quality construction sets, but not many schools have teachers who can unleash the potential of the child. According to Fedotov, the ideal teacher of continuing education is an engineer who has worked in production and felt a craving to pass his knowledge on. More often such specialists are found in private schools, but it is worth noting that they need professional retraining in pedagogy. 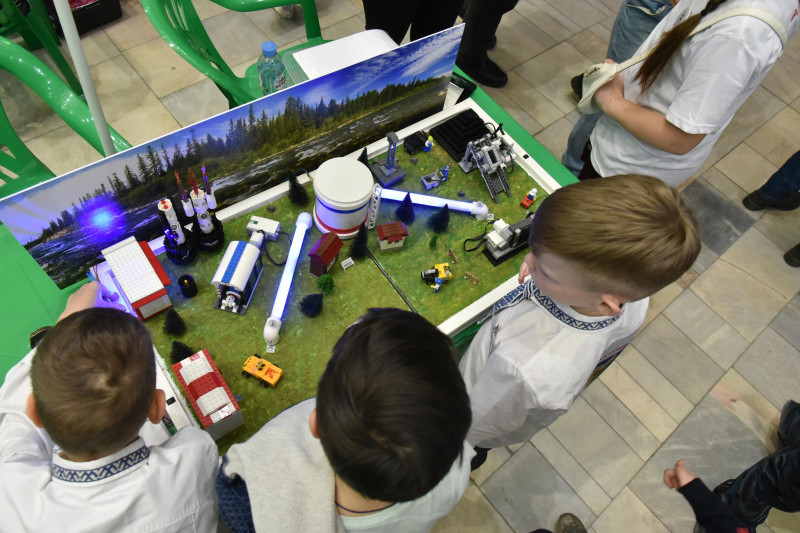 According to Fedotov, the authorities need to develop a transparent mechanism for funding schools that develop children's robotics.

“It is necessary to equalize public and private schools. There must be a fair competition. This will be a great incentive for budget schools because in some municipal institutions have no serious teaching in robotics - there is some sort of a kindergarten, organization of activities. But if they will have to apply for budget money on a par with us, they will begin to work very differently. The funds should be allocated to those who give results and not to those who are simply used to it. Voronezh has great human potential. We are intensively developing science-driven businesses, there are enterprises designing and manufacturing robots that meet international standards. That is, there are companies in the city that need talents. The future engineering elite of Russia is growing right by our side, we just need to create the conditions for its development,” Alexei Fedotov stated.