Girls in the sky. How pilots from "Night Witches" are connected with Voronezh 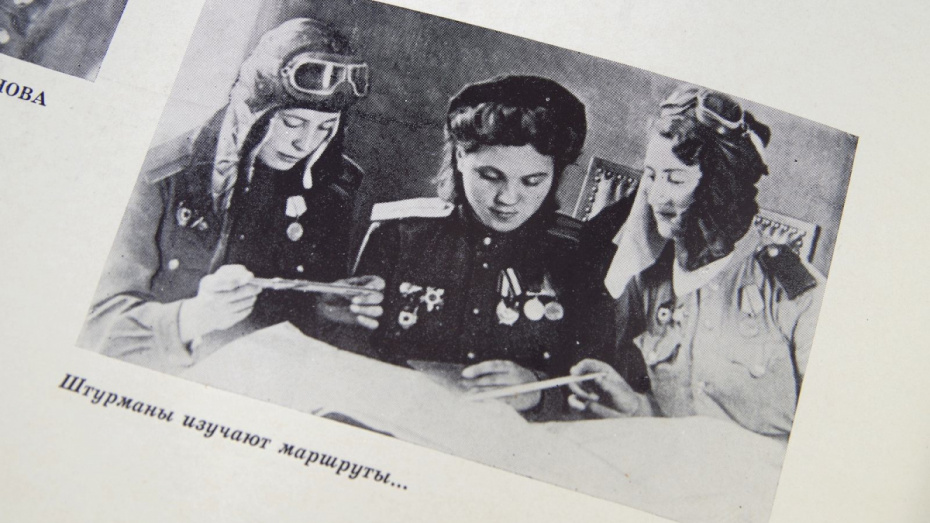 Heavenly Slug, Night Witches in the Sky - these war films are dedicated to the famous female pilots of the 588th Night Bomber Regiment, which was created on the initiative of the pilot Marina Raskova. The regiment consisted entirely of girls who flew dangerous Po-2 plywood planes. The Germans were horrified of them and it was they who gave the regiment an unofficial name - "Night Witches." The "Witches" took part in the largest military operations of the Red Army: the battle for the Caucasus, the liberation of the Kuban, Taman, Novorossiysk, Crimea, Belarus, Poland, and battles in Germany.

In an interview with the RIA Voronezh correspondent, Voronezh historians Oleg Bobrov and Tatyana Chernoboeva said that the "Night Witches" also flew over the Voronezh Region. There are other versions as well. But there is at least one thread that definitely connects the “Witches” with Voronezh. For more details, read this story.

How were female regiments created?

Until the fall of 1941, the Red Army had no female air regiments. The course of history was changed by the Soviet navigator pilot Marina Raskova - the one who, along with Polina Osipenko and Valentina Grizodubova, made the first non-stop flight from Moscow to the Far East in 1938. She personally appealed to Stalin with a request to let women into military aviation. So, at the initiative of Marina Raskova, an air group of three female air regiments was formed in Engels: the 586th Fighter Regiment, the 587th Bomber Regiment, and the 588th Night Light Bomber Regiment. When enrolling in the regiment, the girls usually already had flight training, which they had taken at flying clubs.

In 1943, the 586th Fighter Regiment was stationed at the Prichda Airfield in Voronezh. Female pilots flying Yak-1 aircraft protected the railway junctions of Voronezh, Kastornaya and bridges across the Don and Voronezh rivers from Nazi raids.

In the 587th Bomber Regiment, commanded by Marina Raskova, the girls flew diving Pe-2 bombers (popularly called "pawns"). According to Valentin Kotyukha, a social activist and head of the board of the Voronezh branch of the Kalashnikov Military Sports Union, who studies the Great Patriotic War, following the death of Marina Raskova on January 1, 1943, her regiment was relocated to the airfield of the village of Khokhol-Trostyanka, Ostrogozhsky District.

“The regiment was part of the Voronezh Front but did not conduct military operations - the girls were engaged in military training. They were here from February 1 to April 27, 1943,” Valentin Kotyukh clarified.”

The war route map of the 587th regiment shows that it flew into the village from Tambov. After leaving Khokhol-Trostyanka, it moved to Borisoglebsk, and from there - to Shakhty. The temporary regiment commander was the commander of the first squadron, Yevgenia Timofeeva. The headquarters commander was Militsa Kazarinova.

“Vasily Muravyov lived in Khokhol-Trostyanka. He told me that he wanted to get into this regiment during the war but he was not allowed in - the regiment was female,” said Valentin Kotyukh.

Why did the Witches fly at night?

The 588th night bomber regiment, which was subsequently transformed into the 46th "Taman" Guards Night Bomber Aviation Regiment, accepted exclusively girls from 18 to 25 years of age. The pilots were elusive to the enemy. 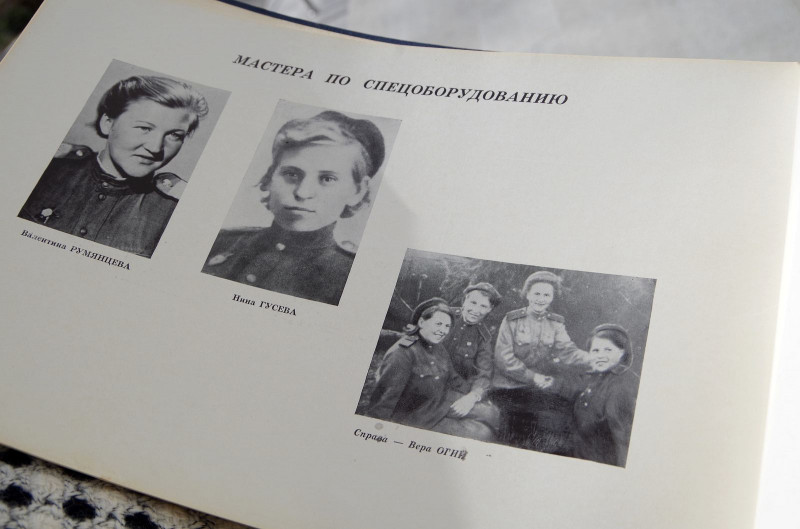 “The Night Witches did unthinkable things. When approaching the target, they turned off the engines and practically hedgehopped. German radars could not detect them. There was a slight rustle that resembled the rustling of a broom. First, you could see a light in the sky, then grenades, small bombs, and land mines came flying at the Nazis,” said Oleg Bobrov.

“Pilots worked exclusively at night because, during the day, their biplanes became easy prey - they had low speed, and the pilots had only pistols for weapons at first. Small machine guns began to be installed on planes only in 1943. The planes did not have protection against bullets and fragments, the pilots did not have parachutes - instead, bombs were hung under the plane’s “belly”. In short, if a shell hit the plane, the girls were doomed to death,” added the historian. 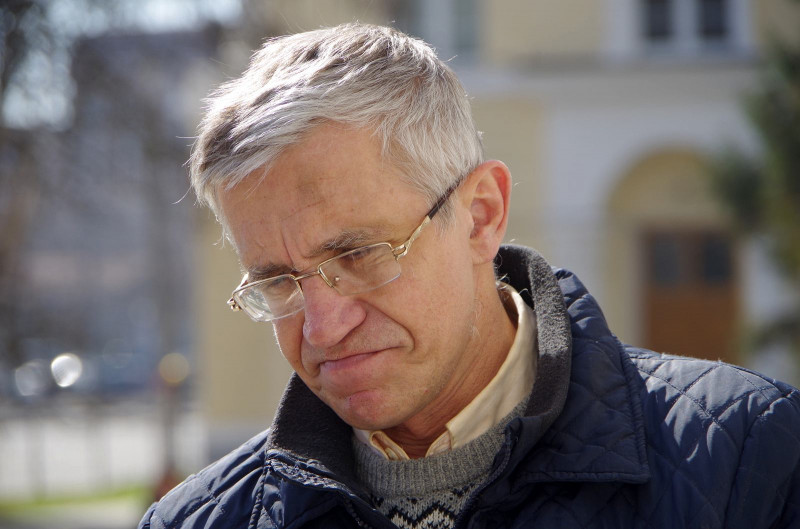 Having dropped bombs on the enemy, the Night Witches returned to the airfield to rearm and fly on a mission. During the night, the brave girls made from five to 12 sorties. The bombs were dropped on German fortifications, the rear of the enemy and his depots.

The Nazis hated and feared the "Night Witches". For each downed plane of these brave girls, German pilots received the prestigious Third Reich award - the Iron Cross.

“German officers wrote to their relatives: “Soviet aviation is not as scary as the “Night Witches”. Firstly, they do not let you sleep, and secondly, you never know where death will come for you,” Oleg Bobrov noted.

But soon the Germans began to take security measures - to turn on searchlight aimed at the sky.

“The pilots began to fly in pairs: one plane fell into the rays of the searchlight and attracted attention, and the second made the bomb drop,” Oleg Bobrov reported.

32 girls from the regiment had died during the war.

How are the "Night Witches" related to Voronezh?

Initially, the 588th Night Bomber Regiment consisted of two regiments commanded by Yevdokia Bershanskaya and Valentina Grizodubova. Yevdokia’s regiment was jokingly nicknamed “Dunka’s Regiment” (Dunya, or Dunka, is the short version of the name Yevdokia – RIA Voronezh). According to Oleg Bobrov, it fought on the Voronezh Front:

“The “Night Witches” regiments were based on the so-called “jump” airfields, which were intended for short-term parking for refueling and aircraft repair. Such airfields were located either in the near rear (this allowed reaching the German positions in a few minutes) or in neutral territory.” 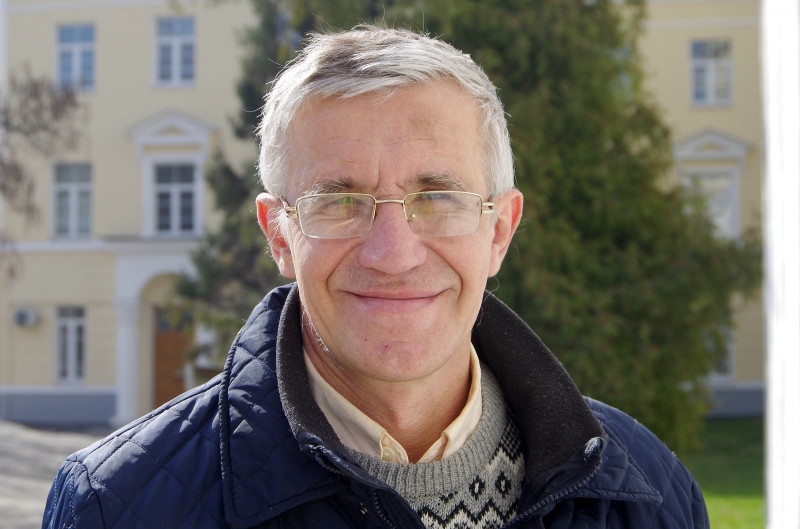 Oleg Bobrov claims: the war path of the "Night Witches" began at the defensive Voronezh-Voroshilovgrad operation (June - July 1942) – at that point, the regiment was based in Voroshilovgrad. After the liberation of Voronezh, the Night Witches’ airfield was also deployed in the village of Khokhol-Trostyanka, Ostrogozhsky District, which was liberated in early 1943 during the Ostrogozhsk–Rossosh Offensive.

“During the Voronezh–Kastornoye Operation, the 40th Army liberated Gorshechnoye. The troops of the Voronezh Front were about to strike at Kastornoye but the tank units ran out of fuel. They were helped by girls on U-2 night bombers who delivered diesel and gasoline to our troops. Among them were Heroes of the Soviet Union Rufina Gasheva and Natalya Meklin,” noted Oleg Bobrov.

The historian added that the girls had flown over the Don in the Voronezh Region until the Battle of Kursk:

“Before the Battle of Kursk, the female pilots bombed the German positions at night and did not allow the Germans to find the concentration of Soviet troops on the Kursk Bulge.”

Version № 2. The regiment fought on the Voronezh Front but might not have anything to do with the Voronezh Region

This opinion is shared by Stanislav Khodakovsky, Chairman of the Regional Council of Veterans of War, Labor, Armed Forces, and Law Enforcement Agencies. 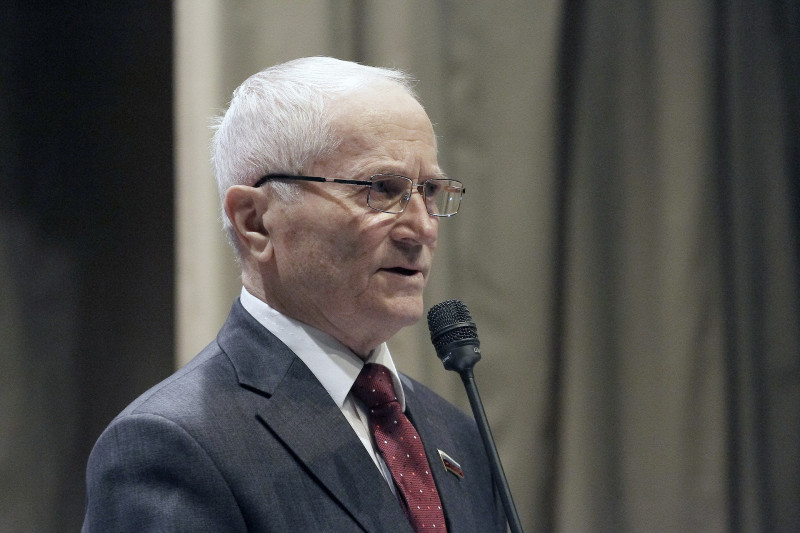 Photo - Yevgenia Yemelyanova (from the archive)

Version № 3. One of the "Night Witches" lived in Voronezh

Tatyana Chernoboeva, Head of the Museum of History of the Voronezh Pedagogical Institute, showed a Soviet book-album with photos of girls from the “Night Witches”. The book The 46th “Taman" Guards Night Bomber Aviation Regiment, which Tatyana Chernoboeva had not seen before, was brought to the museum of the Pedagogical Institute by a resident of Voronezh, Maria Zabavnikova.

On the first page, there is a photo of the aviator Valentina Polunina with the following inscription: “To Dear Lyudmila Vasilyevna from Valya’s Friends”. Below are genuine signatures, among which one can clearly distinguish the signatures of the senior aviator, Hero of the Soviet Union Raisa Aronova, Unit Commander and Hero of the Soviet Union Irina Sebrova, Chief of Staff of the 588th Air Regiment Irina Rakobolskaya (she later wrote the book They Called Us “Night Witches”), senior technician Nina Buzina. 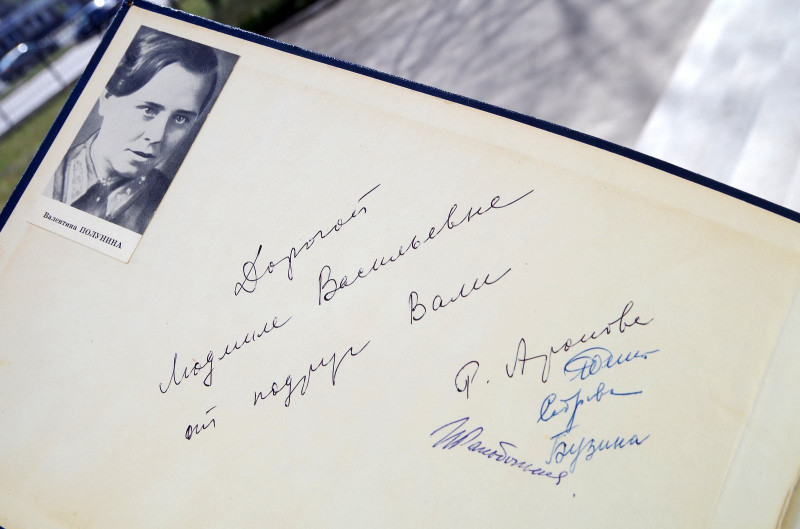 The owner of the photo album told Tatyana Chernoboeva that Lyudmila Vasilievna, to whom the album was addressed, was the aunt of the pilot Valentina Polunina, whose relatives had lived in Voronezh.

“Maria Zabavnikova told that Valentina's parents lived here both before the war and after. In 1977, the pilots of the "Night Witches" came to Voronezh and came to visit Valentina Polunina’s mother but she was no longer alive - they were met by her aunt,” said Chernoboeva. 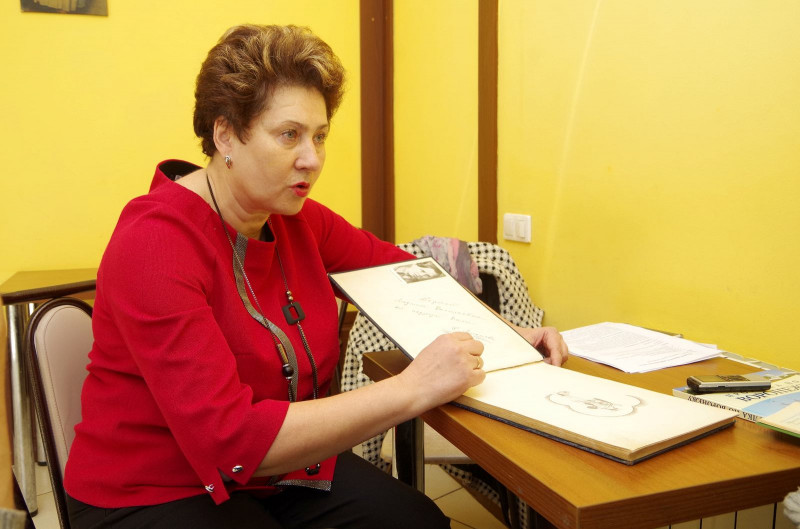 The head of the museum suggested that Valentina Polunina lived in Voronezh. Unfortunately, the owner of the album, Maria Zabavnikova, refused to talk about it with the RIA Voronezh correspondent.

There is little information about Valentina Polunina. She was born in 1917 in the city of Rasskazovo, the Tambov Region. She was enlisted to the Red Army by the Tambov regional military commissariat in 1942.

“Valentina was the senior pilot of the “Night Witches” with the rank of guard sergeant. Valentina participated in the Battle for the Caucasus, the liberation of the Kuban and Crimea, and bombed enemy facilities. She flew with the mechanic Glafira Kashirina,” Tatyana Chernoboeva noted.

From March to September 1943, the pilots participated in the breakthrough of the “Blue Line” - the Nazi fortification system on the Taman Peninsula. The girls died on the night of August 1. Tatyana Chernoboeva noted: according to one version, their plane was shot down by anti-aircraft battery fire, and according to another, the girls were downed by a German Messerschmitt.

Valentina’s grave is located in the Russkoye village of the Moldovansky village council of Krasnodar Krai. 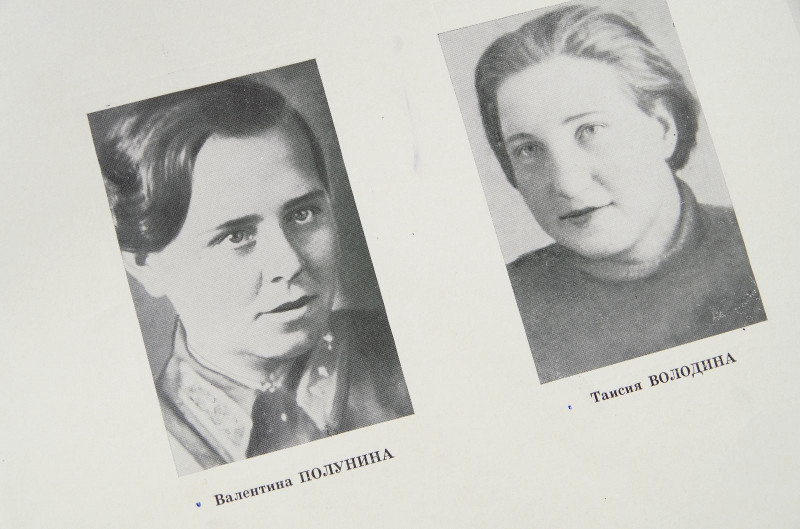 By the way, there is one "thread" that definitely connects the "Night Witches" with Voronezh: the Voronezh Mechanical Plant made M-11 engines for their plywood biplanes.

“Raisa Aronova, Hero of the Soviet Union, wrote to the workers of the Mechanical Plant. In the letter, she said that the Voronezh engines worked perfectly and did not let the pilots down,” Tatyana Chernoboeva told. 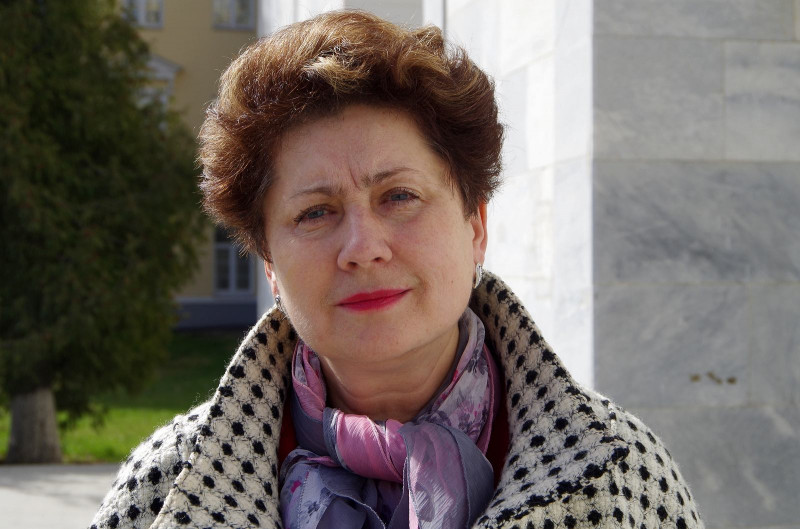 Version № 4. The "Night Witches" are not connected to Voronezh in any way

Valentin Kotyukh noted that Yevdokia Bershanskaya’s regiment never was in Voronezh or the Voronezh Region. Local historian Vladimir Yeletsky has a similar point of view.

“The “Night Witches” might have flown over the Voronezh Region but they were definitely not based here. There was no Voronezh Front in Voronezh - we had the South-Western Front. Its headquarters was in the building № 80 on Sacco and Vanzetti Street. Later, the front became known as the Voronezh Front. Unfortunately, the military had us confused,” noted Vladimir Yeletsky.