Garlic and firewood before workout. How villagers of Voronezh Region go to a fitness club 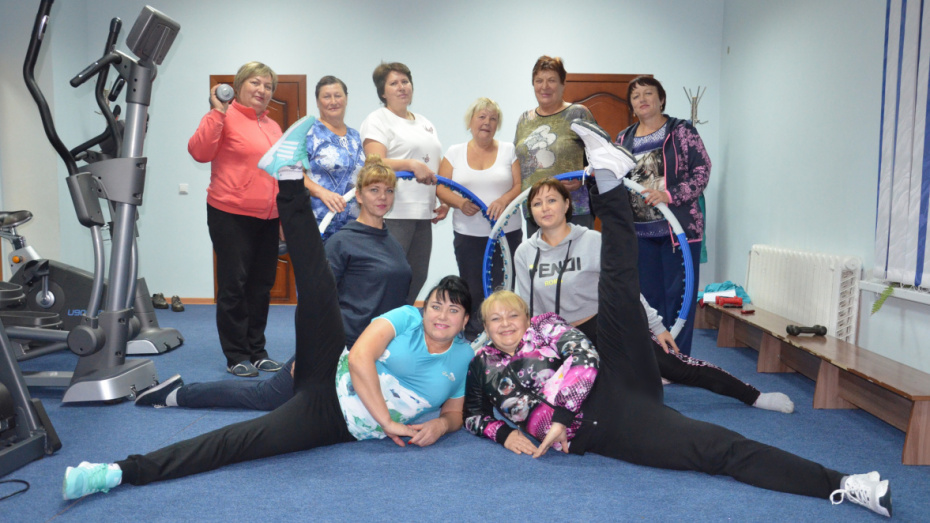 Residents of Russkaya Buylovka shared the results of their workouts.

According to the resolution of the UN General Assembly, the International Day of Rural Women is annually celebrated on October 15. In 2019, the holiday will be held for the 12th time.

Residents of rural areas traditionally run a large household. And it is believed that their physical activity is associated only with the garden and taking care of livestock. But women of all ages from the village of Russkaya Buylovka of Pavlovsky District of the Voronezh Region put on leggings and T-shirts twice a week after completing their household chores to attend group workouts with a trainer to rhythmical music. To find out what the villagers get from sports, read the RIA Voronezh article. 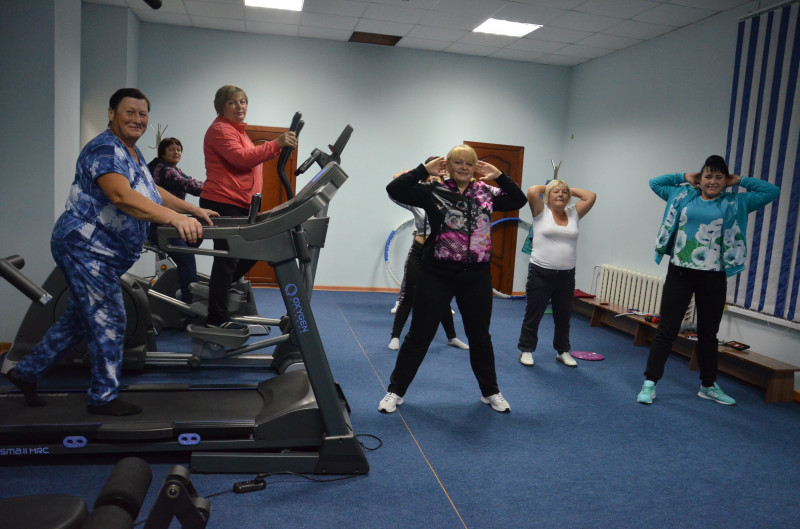 From the stage to the gym

A gym on the ground floor of the rural Recreation Center in Russkaya Buylovka was opened in 2014. The room underwent solid cosmetic repairs, providing a special coating for aerobics. The hall was equipped with cardio equipment and a massage chair. All the exercises classes are free and begin at 19:00 on Tuesdays and Fridays.

People come to exercise at the Buylovka gym from Pavlovsk, as well as the villages of Nikolaevka, Bolshaya Kazinka, and Shkurlat 3rd. Fitness has brought together dozens of female villagers from the age of 20 and older, but most of all women over 50 who had raised their children, had grandchildren and finally found time for themselves. In mid-October, with the completion of work in vegetable gardens, there are more and more people who want to go to fitness. All gym visitors note an improvement in their well-being: their blood pressure normalizes, their weight decreases, the interest in life returns. And their families couldn’t be more proud of the changes in their appearance.

As the head of the culture and recreation association Svetlana Kashcheeva said, the fitness club was created even before the allocation of the gym - in 2009, so the community is already ten years old. At first, they exercised simply on the stage of the Recreation Center, but even then there were many who wanted to do it.

The team leader Valentina Starkova works as a methodologist at the Recreation Center. She does not have a sports education, but she has been involved in physical culture for many years. Fit and smiling, she is an example to follow. Valentina teaches at the fitness club on a volunteer basis: 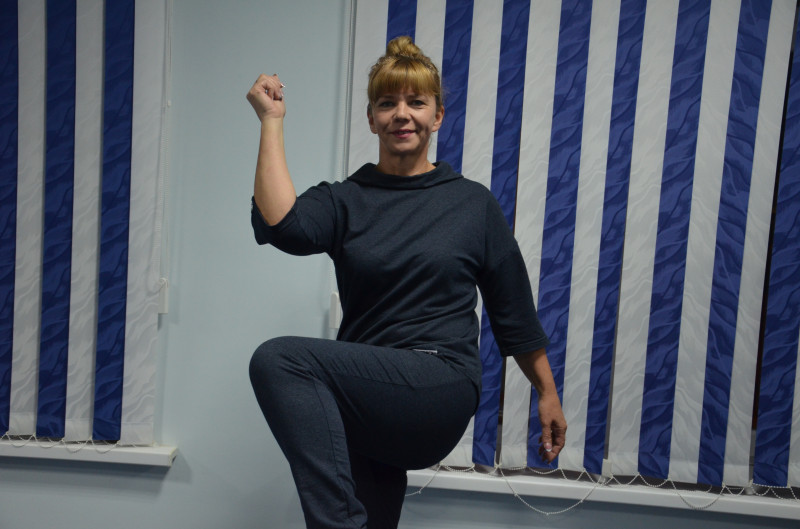 – Look, our group includes both girls and women of age. They come from 40 km away and return with friends, sisters, and acquaintances. First, a small workout to the music, then 15-20 minutes on an exercise machine.

An elliptical trainer and exercise bikes, a treadmill, a hula hoop, dumbbells, abdominal crunch bench - everyone will find something to do here. However, many come not just for the sake of a beautiful body but also for communication. To them, the gym in Buylovka is sometimes the only way to escape from pots and garden-beds. 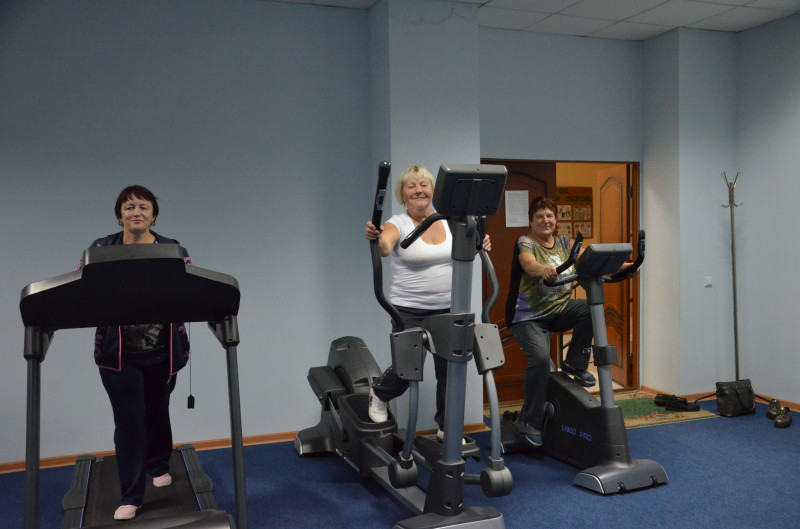 “The most important thing is not to spare yourself”

45-year-old Inna Malykhina, 43-year-old Yelena Kasilova, pensioners Nina Nechaeva and Nina Zhukova do not miss a single workout. They do it to the best of their ability – everyone’s age is different.

The oldest member of the fitness team, Valentina Shiryaeva, is 70. She has three children and six grandchildren. The woman worked as a biology teacher at the Buylovka School for 40 years and another seven years as a biologist at the young naturalist station. And the pensioner has also been a part of the well-known folklore ensemble Don Springs almost since its very foundation day.

– I retired and kept thinking: what will I do without work? When the gym opened in Buylovka, I went to the training without hesitation. By that time, we had managed to form a permanent team with which we visited the pool at the Sports Development Center in Pavlovsk. And the fitness club simply warmed up the former attitude, – said Valentina Shiryaeva.

She has been retired for five years. She tries to keep to a diet of mainly from fruits and vegetables, likes excursions and walks a lot. After fitness classes, she does a compulsory 20-minute walk before bedtime (the distance from the Recreation Center to Valentina’s house is 2 km).

– There is such a word as "must." If you repeat it three times, the fatigue vanishes as if by magic. Even when you don’t feel like it, you need to get up and go. The most important thing is not to spare yourself, – the pensioner says.

52-year-old Nina Mishcherina is confident that physical culture prolongs her life. The head of the service department of the Buylovka library has only been going to workouts at the rural fitness club for six months despite the fact that he works in the same building. But she already notices positive changes in her body - she has lost 5 kg. At the same time, the woman manages to do the housework:

- Today, for example, I planted 1.5 thousand heads of garlic - one row in the morning before work and the second before the training. Each is 130 meters long. Add to that Muscovy ducks, broilers in large numbers, and a vegetable a garden of 35 decares. I think it's never too late to be engaged in sports. You need to try at any age because the movement is life. This was always taught to me by my grandmother Akulina Ivanovna who, even at the age of 90, never sat idle.

“You need to find time for yourself”

Valentina Prishutova has been exercising in the club for three years. During this time, she became slimmer by 10 kg: 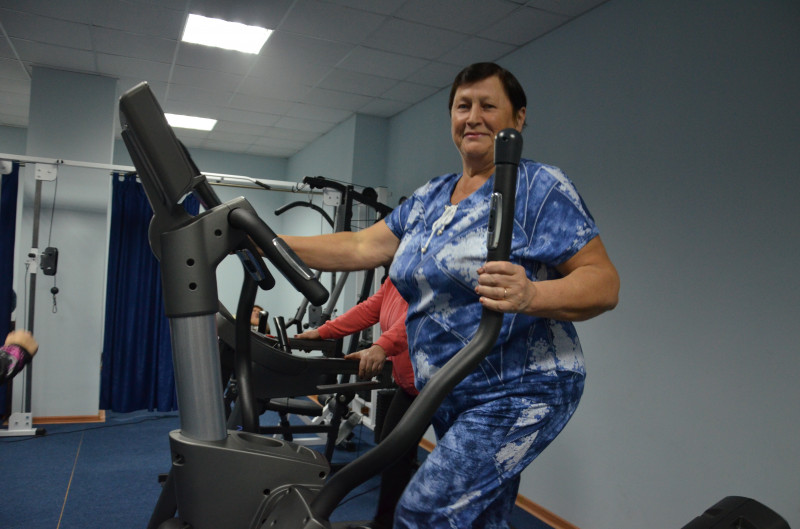 – We don’t get to be tired. Even if I’ve been chopping firewood all day before the training, I still get up and go.

55-year-old head of Don Springs Natalya Lobyntseva, who has been engaged in fitness since the club’s foundation under the Recreation Center, agrees with her. Even if she has to go on a tour the next day, she finds time ride the exercise bike.

– Everyone who comes to the club says she can’t do it at first. But after practicing for half an hour, they are surprised to see that they have a second wind. Many women experience a charge of positive emotions. I believe that’s the way it’s supposed to be. You need to find time for yourself, – coach Valentina Starkova stressed.