Art of balance. How injury has brought Voronezh Region resident into balancing 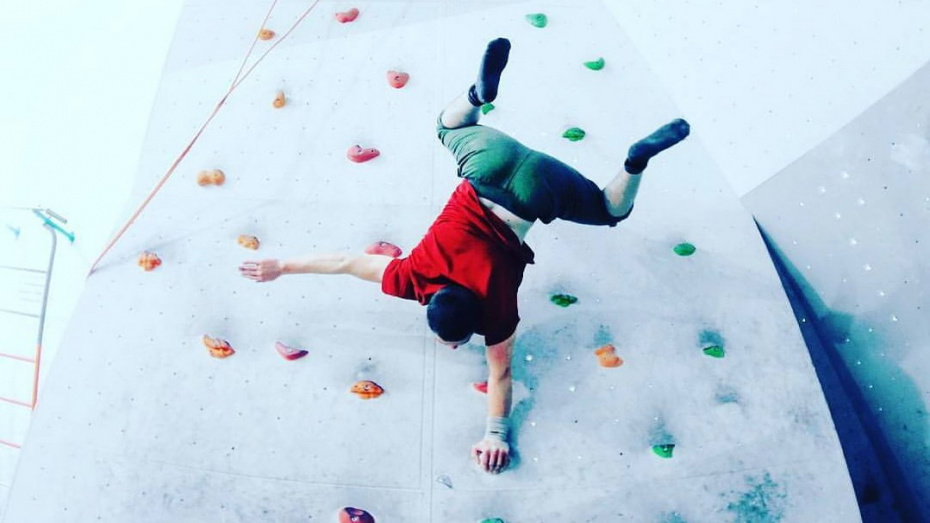 Alexei Shchepkin is invited to work at the Moscow State Circus.

A native of Gribanovsky District, Alexei Shchepkin, has repeatedly been invited to the Moscow State Circus. The young man was noted in social media, where he had demonstrated his ability to balance in handstand. Alexei constantly develops his balancing skills. He trains for at least two hours daily. Once he has a free minute, he immediately makes a stand on two or one arms.

Alexei has been engaged in manual balancing for about seven years. According to him, many of his stands have reached the world level. But it all started unusually - with a shoulder fracture. 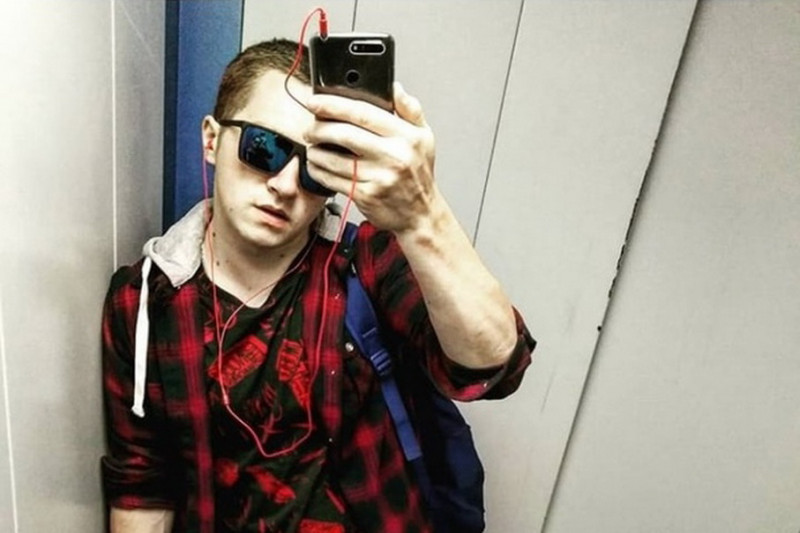 At first, Alexei Shchepkin was engaged in the street workout. At that time, he was still a schoolboy.

“A friend brought me into this street style in 2011-2012. He invited to a sports ground, where they were practicing on horizontal and uneven bars. This was something new for me. Before that, I hadn’t even thought about sports. Although I could do push-ups for long enough,” Alexei recalled.

Although he was mastering some workout elements quickly, the young man did not enjoy it as he now enjoys balancing:

“I was not that interested. Because of this, I mainly did only what I succeeded in. I was lazy, and being overweighed also got in the way. But in balancing, I immediately liked the process itself. I spent more time on it than on workout from the very first days.”

Alexei Shchepkin abandoned the street sport after a shoulder fracture. This happened during the execution of one of the elements.

“While I was in the hospital after the surgery, I watched videos of acrobats, the Kalutskikh brothers. I liked the handstands, their stretching abilities. It was then that I got excited about it. Three months after the surgery, I tried to stand on my arms,” told Alexei. 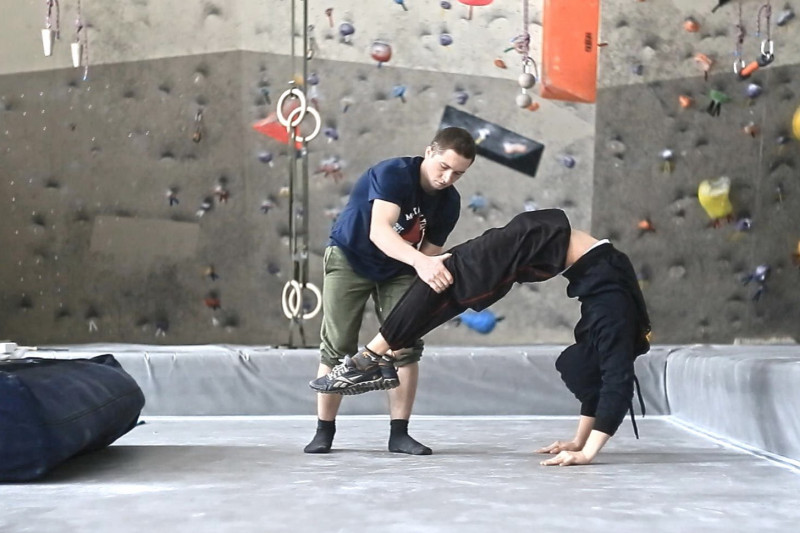 Balancing is a genre of circus art, where artists perform while maintaining the balance of the body in the most difficult positions and on unstable objects.

His relatives did not immediately rejoice at his new hobby: not much time has passed after the injury, and the sport was again unsafe. But when they saw the first results, they stopped asking Alexei to quit this activity.

At the end of the 11th grade, the young man received an invitation to study at the Moscow Circus School.

“They found out about me through the VKontakte social media - I uploaded videos with handstands to different groups. But I didn’t go to the school. My parents said that I needed higher education, and I did not want to go far from home myself.

In 2016, Alexei Shchepkin entered the Voronezh State Technical University and now lives in Voronezh. Combining studies with balancing turned out to be not so difficult. Although the city has more opportunities for developing this hobby, Alexei still trains at home.

“Balancing is a genre which, apart from a floor, does not require any equipment or specialized gyms. And it’s more comfortable to perform the elements alone,” he thinks.

In Voronezh, the young man made acquaintances who shared his love for balancing. One of them is Mikhail Baratov. For his YouTube channel, he and Alexei together shot training videos on handstands.

Alexei himself uploads photos and short videos of his workouts only to social media.

“It all depends on flexibility”

Sometimes the balancer finds new elements on the Internet. But most of them he studied already at the hospital. Now the young man is interested in coming up with different variations of getting into the stand on one arm. He sees this as a manifestation of art.

“I came up with my best approaches when I did not think about them. Spontaneously, as if at the drop of a hat,” Alexei admitted.

The long-standing injury does not prevent the balancer from executing the elements. Only the elbow of the arm that has been broken is still not fully straightening.

Alexei did not have any more fractures. But there were enough sprains and micro-fractures of the ligaments. 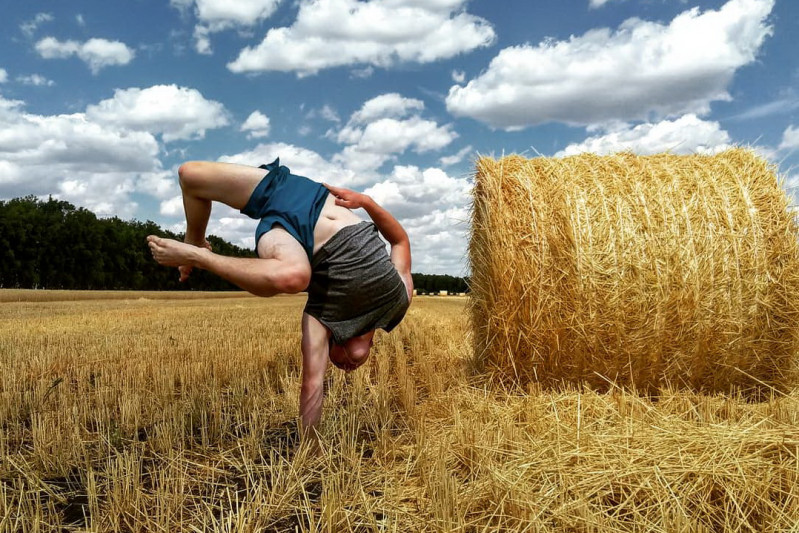 “With a competent approach, a balancer will not have injuries,” Alexei assures. “It all depends on the flexibility and the load on the spine. But if you do everything thoughtlessly, you might have both hernias and fractures.”

The young man devotes all his free time to balancing.

“My head is no longer spinning,” he shared. “At first, I felt a little pressure, but over time it stopped. Now I can stand on two hands for three or four minutes, on one - one and a half, no more. But basically, I do not like to make handstands for the maximum time, I am interested in studying the elements and complicating them.”

Alexei Shchepkin also performs stands on an unstable surface. For example, on a structure of several cubes any of which can drop out at any moment. 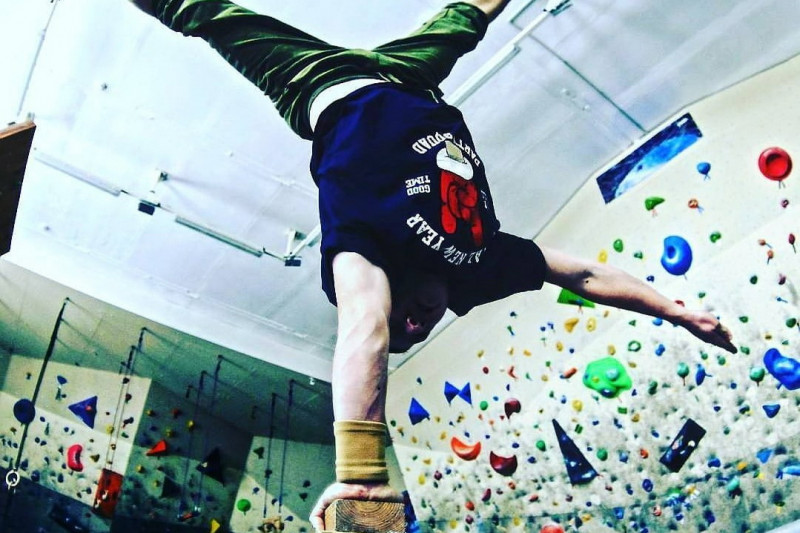 Recently, he has been more engaged in stretching.

“I should have started improving it a long time ago,” the balancer said. “I do well with complex stands now. At the same time, I can do the simple ones, which are considered the basics of balancing - for example, spichags (a leg-split during a handstand – RIA Voronezh) and leg-splits - but not with the quality I want. That’s why now I am filling these gaps in my training, which is why I am improving stretching.

Recently, Alexei Schepkin came up with a couple of new complications of elements:

“The special thing about them is that you must abruptly get into the stand and hold this position due to the shoulder stabilizer,” he specified.

This is not the first time Alexei has come up with stunts. Back in 2016, he executed a turn on one arm in a stand on the bars - and he was very surprised himself.

“I associate my future with balancing,” concluded Alexei Shchepkin. “I want to leave behind something new in the form of interesting and complex approaches. I have been invited to work at the Moscow State Circus. I had to refuse because of my studies. But we discussed everything with the head of one of the programs - he said that if my training level will be good after the university, everything will work out.”