"How a boat is born". Voronezh craftsman has made more than 200 punts 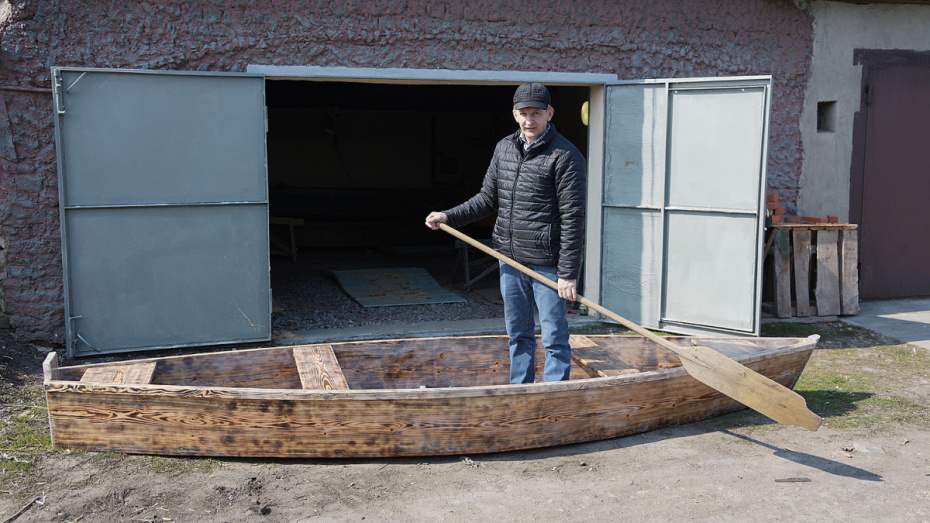 Sergei Gavrin from Ramon mastered the old craft in the 1990s.

About a third of all rowing boats cruising along River Voronezh in the Ramonsky District during the warmer months were created by 56-year-old Ramon resident Sergei Gavrin. His punts also go along the Don in the territories of the Voronezh and Rostov regions. To learn how the man got such a hobby, what the creative know-how of the craftsman is, and what he still wants to create, read the RIA Voronezh story. 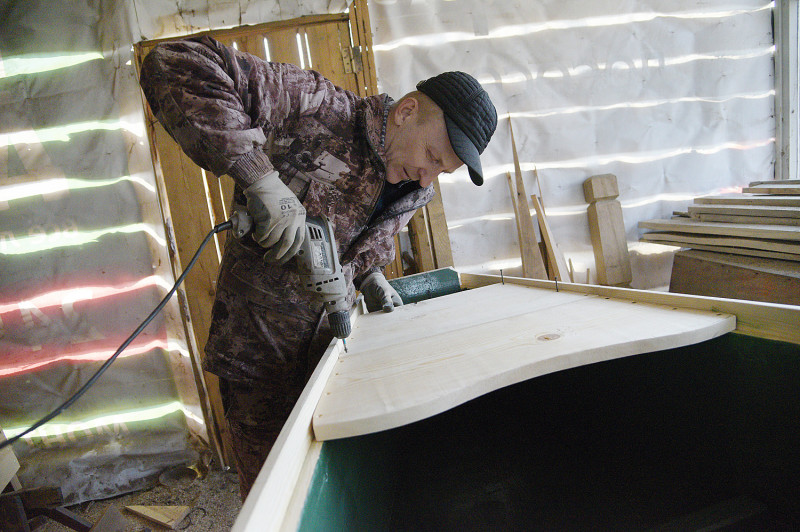 A road in the reeds

Sergei Gavrin has two higher educations: a road engineer and a technologist. In his youth, he spent some time building roads, and in the 1990s, he began working with wood. In this field, he studied everything himself. Even at school, Sergei was fond of shipbuilding and aircraft modeling, so he already had primary skills in handling wood.

“At that time, in the 1990s, there wasn’t much work, but the cooperative movement began. My friends and I created a design cooperative, made stands, shop windows. We mostly made it out of wood,” Sergei Gavrin recalled. “Even then it became clear that I would continue working with it. Our stands and showcases did not bring much income, we had to look for something new. And then I thought that Ramon stood on River Voronezh. There are so many well-known ducts, oxbow lakes, fishing nets here! I grew up on the river, I love fishing and boat trips, so I decided to try making boats.” 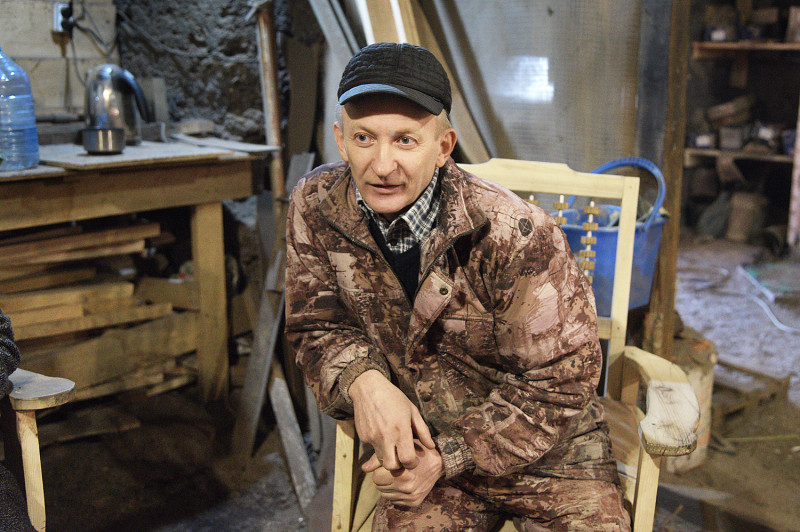 Sergei turned for advice to an old man who had been making boats in his barn for many years:

“It was new to me, I really did not understand how a real boat is born. He took me in as an assistant and showed me what’s what.”

Since then, Gavrin has been making boats. Mostly one-oared ones - they are undemanding and stable in calm water, they can pass through any reed thickets. In total, over the years he has made more than 200 boats. 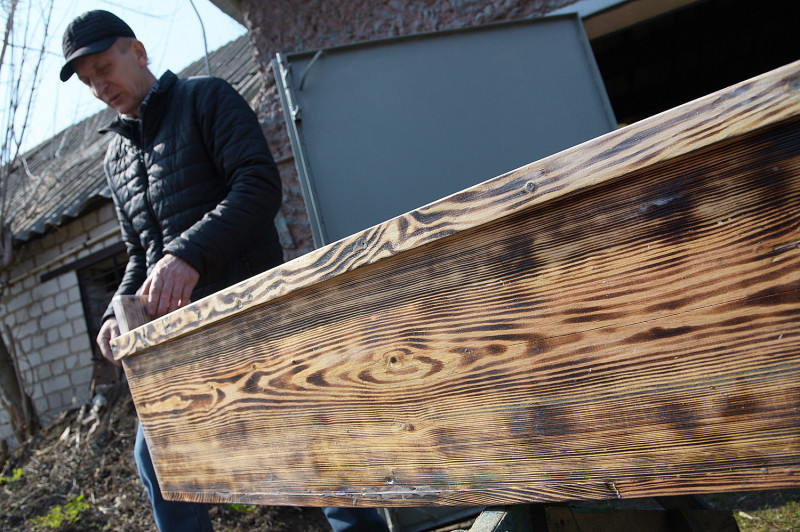 “In our area, we can talk primarily about a punt boat driven by a single oar, such as a canoe. A two-row leisure-type boat with so-called single-bank oars is not always suitable for River Voronezh. In some places it is wide and in others - overgrown with reeds, with a winding channel. A two-row boat is not always convenient in narrow channels, the grass clings to the oars, and, after all, such a boat needs a wide passage in the reeds. A one-oared boat is much better for such conditions,” the craftsman explained. 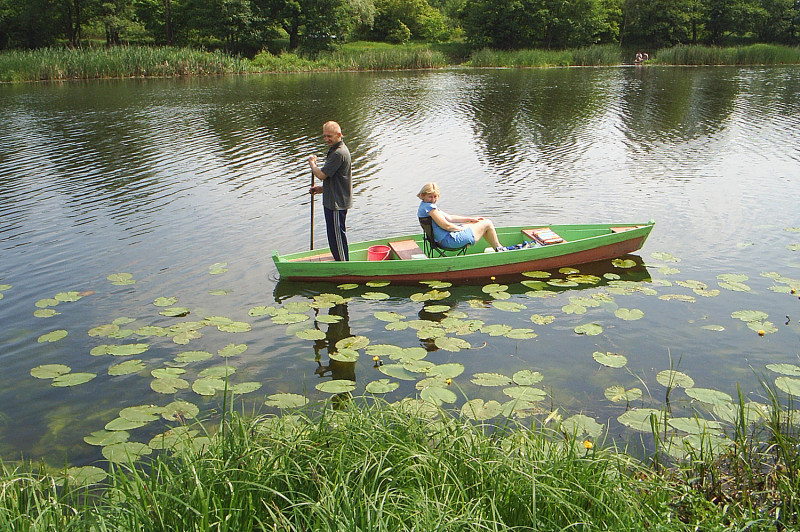 Making boats is still a hobby for him – he earns his living by doing other things also related to carpentry.

“On average, I need 0.35 cubic meters of wood - pine or oak - to manufacture one boat. I make one boat in about a week and a half if I work two to three hours a day. This is basically the usual carpentry. I tried to draw my very first boats on paper but then gave it up - river punts are basically the same. They differ only in some nuances: the height of the side, which ranges from 35 to 50 cm, the length of the boat (from 4 to 4.5 m), the weight (100–150 kg), and the length of oars (2 m minimum). I once made a boat for long trips along the Don – it had oarlocks for the pair of oars just in case - its single oar was over 4 m long so that in case anything happens, it could be used as a pole to push it off the bottom,” said Sergei Gavrin. 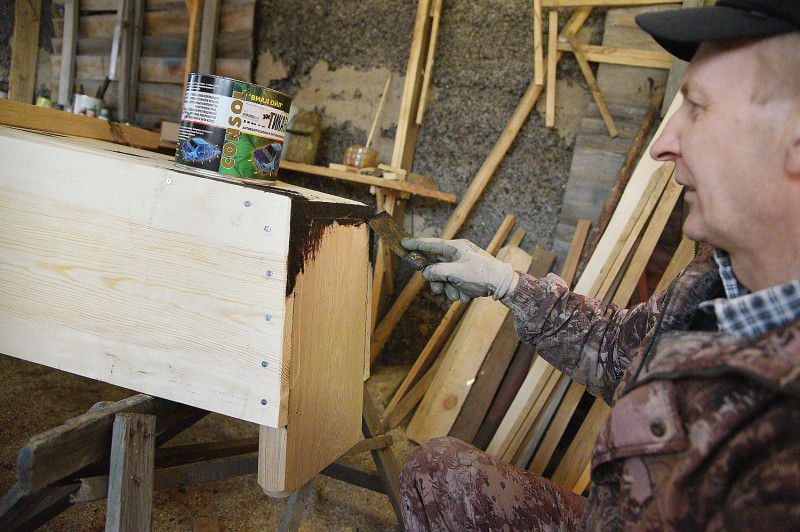 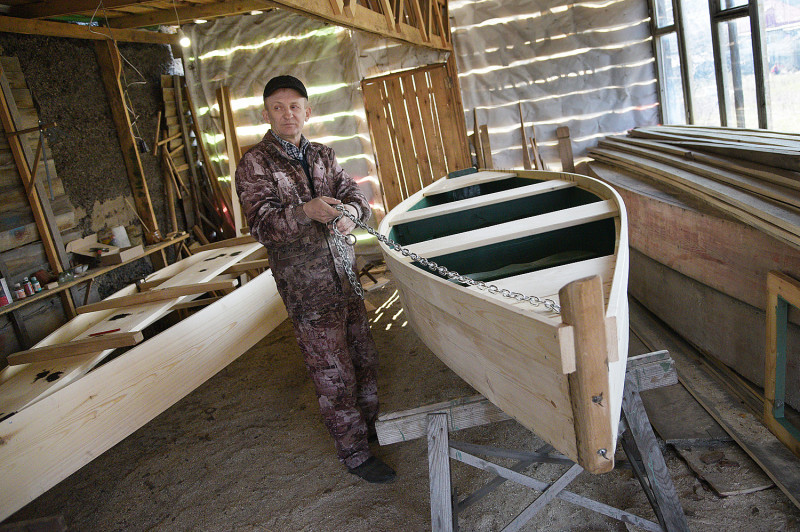 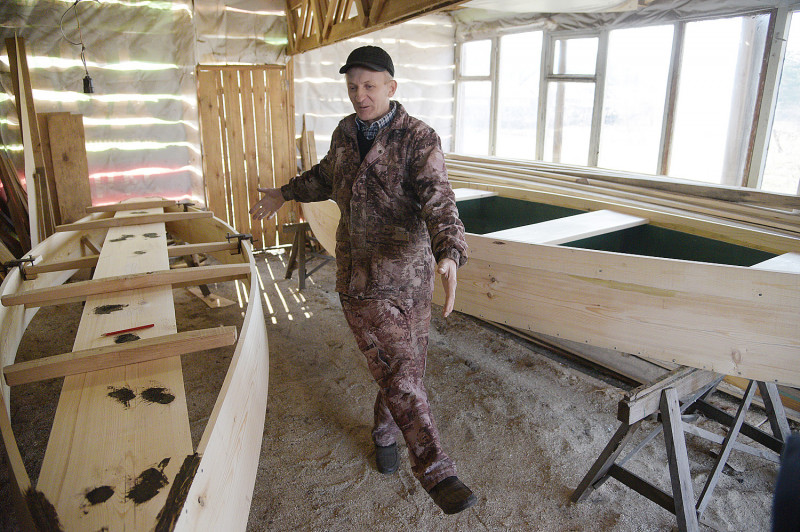 Several brand new boats are drying in the sun covered with a special water-repellent composition. 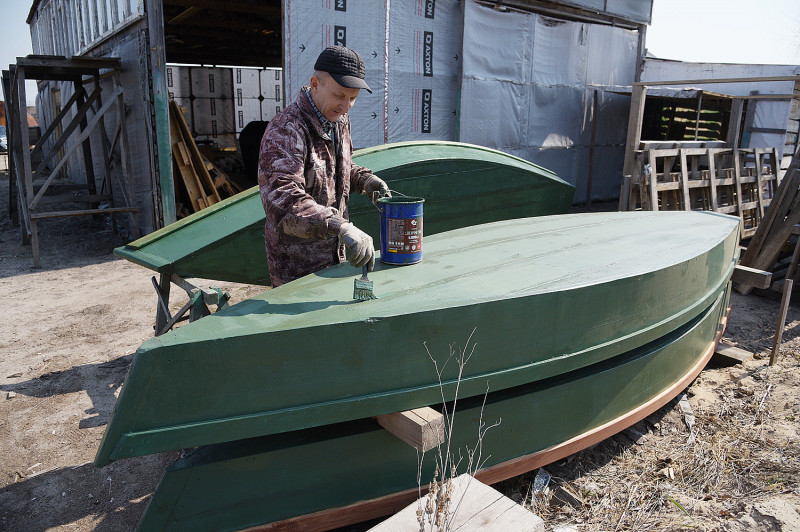 According to the craftsman, the most difficult thing is to choose the planks for boat sides: they should be equally elastic:

“I find such planks, lay them out and jump on them so that I myself can feel exactly how they spring. If they feel a bit differently, then I have to make one of them a little thinner with an electric planer. Many are surprised when I tell them about the order in which I make a boat. According to classical patterns, it must be started from the bottom, which is then sheathed with the sides. But I'm used to the other way around - first the sides and then I insert the bottom between them. It seems to me that this way it’s easier to see the contours of the future boat. When I make a boat, I make sure to build the possible consequences of fluctuations in the thickness of the joints between the planks in it - the difference between wet and dry wood. Between the seams, I insert tiny wedges that regulate this difference.” 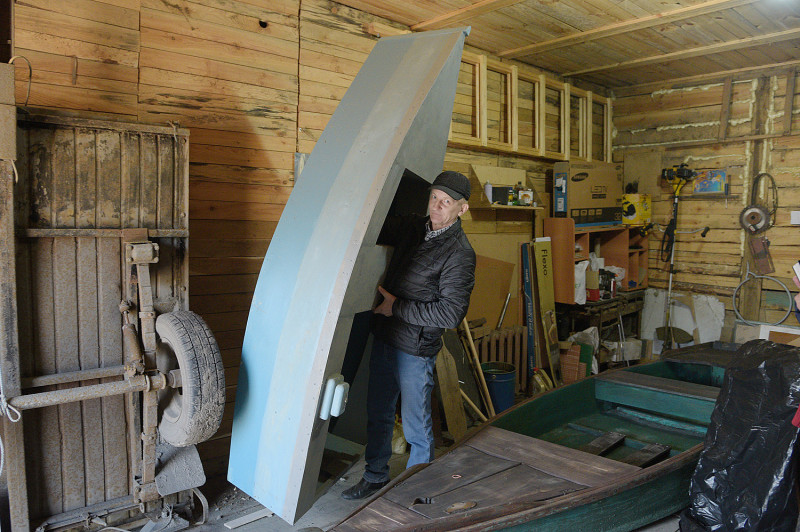 “A standard boat with annual use on water and proper winter storage can serve an average of at least ten years, and the less it has to be caulked before the start of each season, the better. In order for a wooden boat to serve longer, its owner must follow simple rules. It is advisable not to leave it in the water for the winter frozen in ice - instead, bring it on a trailer (two people can load a 100-kilogram boat) to a cool room, such as a garage. The most important thing is for the boat to retain moisture accumulated over the summer. No drafts that will just blow it away. If you keep your boat this way, you won’t have to caulk it in the spring, and it will last for about 20 years.” 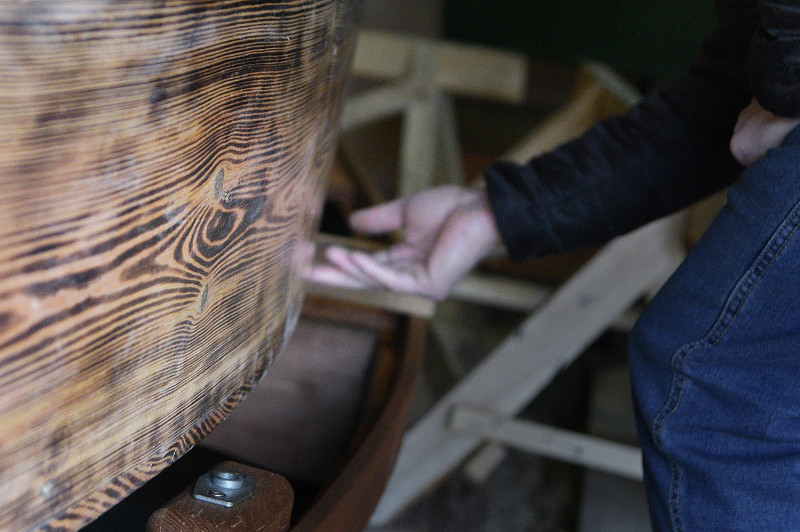 The Ramon resident keeps a ton of photographs of finished boats that he makes for many acquaintances and friends. Someone asked him to make a stem with a dragon, someone - to paint the boat in an unusual color. Others order lockers embedded in the seats, some ask to cover the bow of the boat with wood right up to the first seat so that it results in something like a one and a half meter sunbed and they can sunbathe in it while the boat is moving. 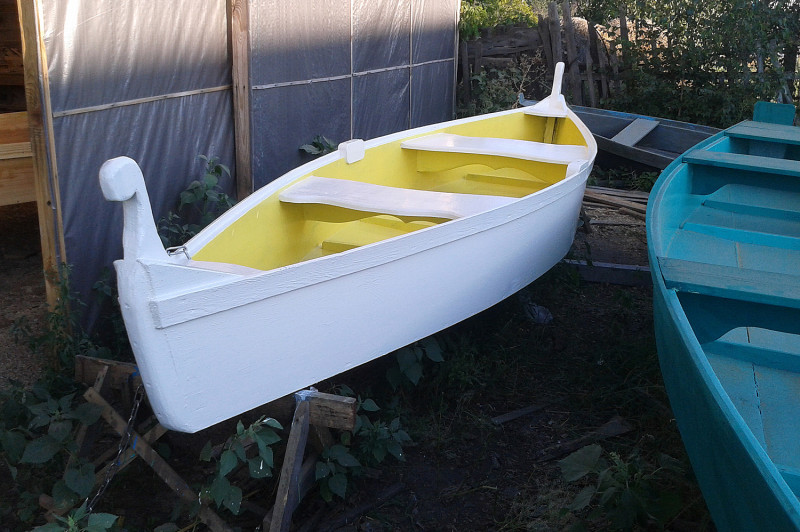 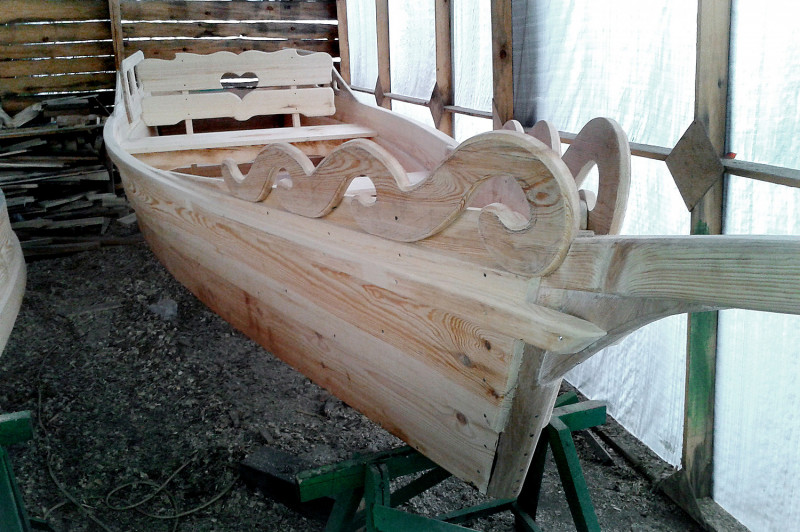 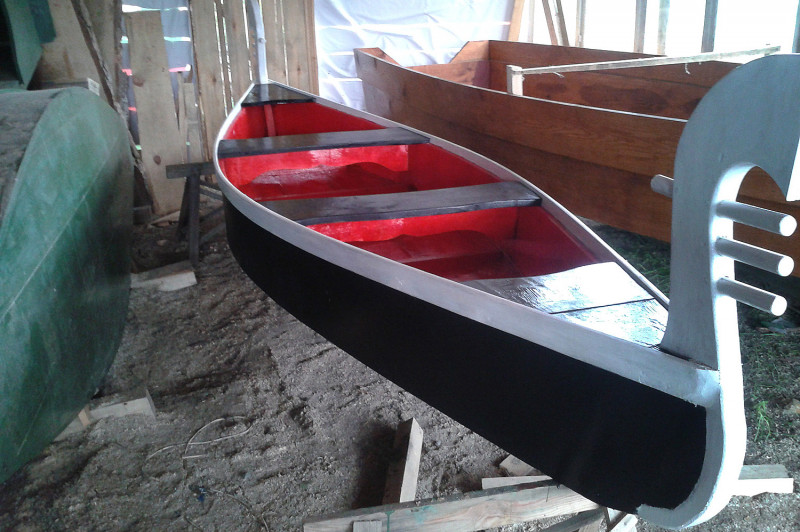 “All these boats are made in such a way that a motor can be mounted on any of them. For example, I recently bought an electric one for my “fleet” - it is silent and does not spoil the environment,” Gavrin shared.

His “fleet” has about a dozen ships that are stored in several garage rooms in winter. It includes boats of all shapes and sizes. 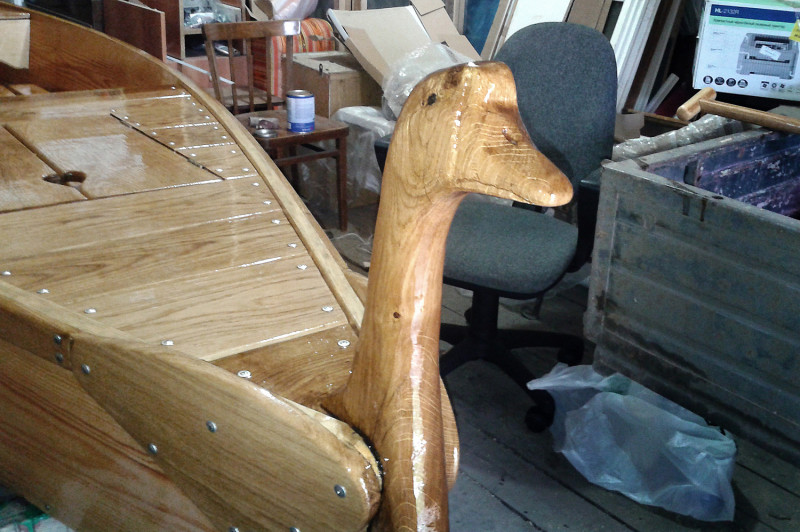 On one, covered with a special composition, the craftsman tested an experimental way of waterproofing, it weighs less than 60 kg. Another is one and a half meter long: one huge bow with chopped aft, the third has a pirate look, with a predatory "pike nose"...

“Now my main dream is to assemble a fountain-jet engine with my own hands. It is something like a tiny jet engine, similar to those that are put on jet planes. For River Voronezh, its main advantage is that it does not have an external water propeller on which algae is often wound. To be more exact, there is one, but it is mounted in a special tube. And the maneuvering of the boat is achieved by changing the direction of the jet stream, which is ejected from the narrow end of this tube. I need to find some motor from an old foreign car at a car dismantling site, make it work, then modify it a bit and put it on any of my boats, then it will be possible to sail along any narrow channel. And if anything, my oar will pull the boat out of the thicket!” 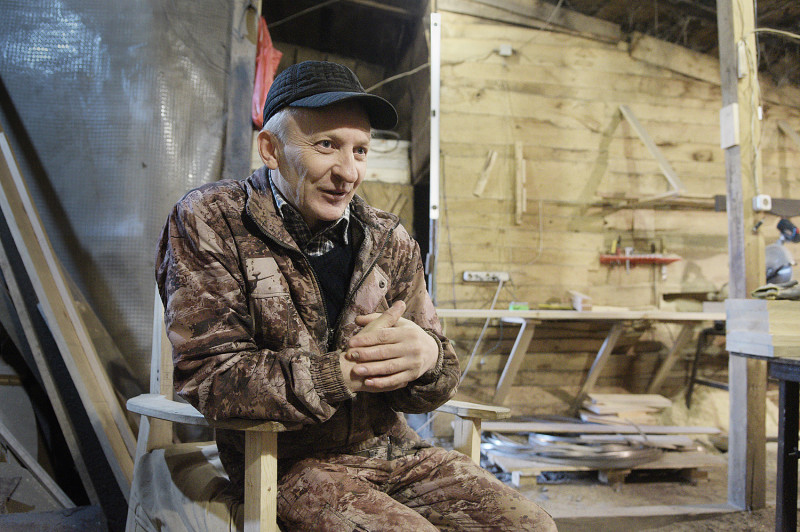