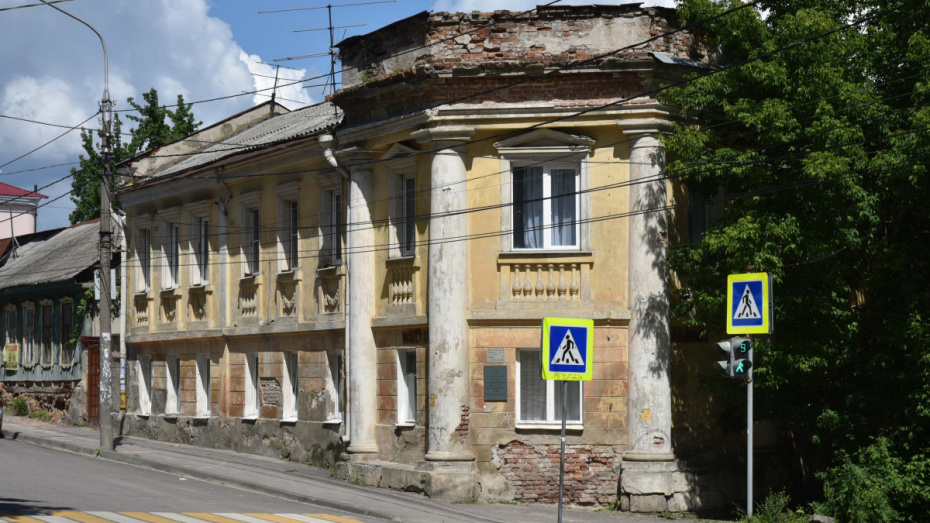 A special project dedicated to the city’s attractions.

In this issue of the special project, RIA Voronezh will tell about Captain Myagkov’s House, a beautiful building in the style of late classicism with an encrypted symbol: a triumphal arch. The monument is located at 44 Kommunarov Street. It appeared on the map of Voronezh thanks to the brave Voronezh captain Ivan Myagkov, a hero of the Patriotic War of 1812, a participant in the Battle of Borodino.

200 years ago, the outskirts of the Akatov Monastery were a prestigious area of the city where rich merchants lived. The house of captain Ivan Myagkov was built in the center of it, at the crossroads of two old streets - Bolshaya Devichenskaya (currently Sacco and Vanzetti Street) and Zhandamskaya Gora (currently Kommunarov Street).

“Today, Devichok (the common name of the area around the Alekseevo-Akatov Monastery) is a little-known area. You can live your whole life in the city and not once end up there. But in the XVIII century, it was the lively center of Voronezh where the city’s nobility lived. At the end of the 18th century, the first library in Voronezh and the first printing house were opened here,” told local historian Olga Rudeva.

History has not preserved the exact spelling of the name of the first owner of this two-story house. In ancient documents, his name was written in different ways: either “Ivan Savvich Myagkov”, or “Ivan Myagky”, or even “Myakhky” and “Mekhkov”. In Voronezh local history, the monument has been assigned to the name “Myagkov’s House”, and the modern memorial wall of the old Ternovoe Cemetery, where he was buried, states: “Ivan Savvich Myagky (Myagkov)”. 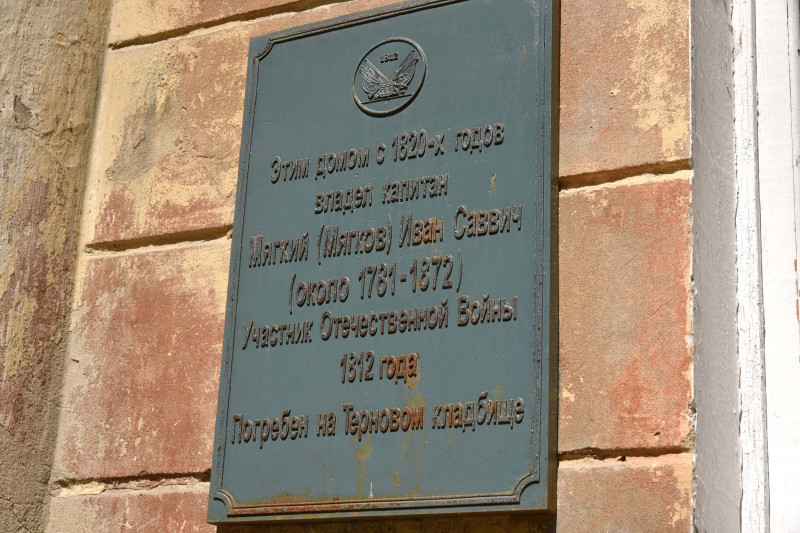 Descended from a family of military men, Ivan Myagkov began serving in the Moscow Dragoon Regiment in 1803. In 1806-1807, he served in the army of Baron Leonty Bennigsen and participated in the battle with the French near Friedland (currently Pravdinsk, the Kaliningrad Region), as a result of which Russia was defeated and concluded the Tilsit Peace Treaty with Napoleon.

“At that time, Myagkov was a quartermaster. He was in charge of food for the troops and allocating apartments for them. And in 1807, he was appointed an auditor - it is what they called military lawyers and court clerks who allowed for court hearings in the 19th century,” noted historian Pavel Popov. 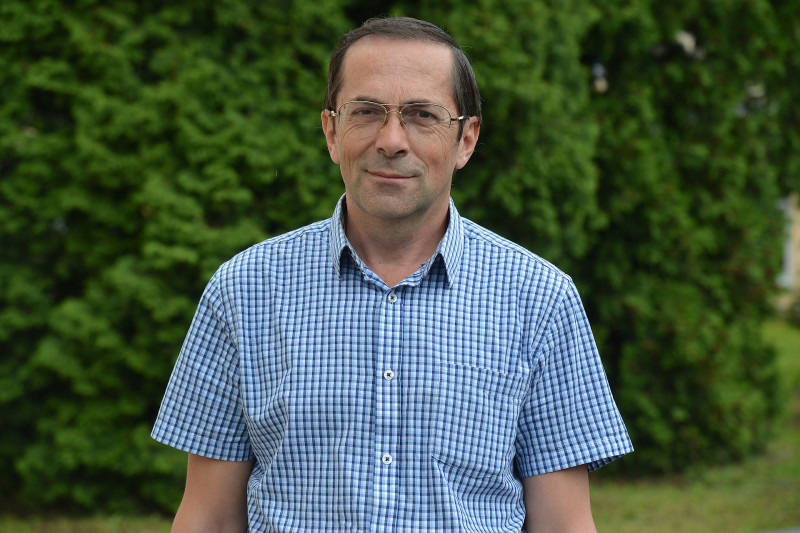 Photo - Roman Demyanenko (from the archive)

During the Patriotic War of 1812, Myagkov fought with the French and was a participant in the Battle of Borodino. He fought in the division under the command of Major General Pyotr Konovnitsyn, who was sent to help the Commander in Chief of the 2nd Western Army, Pyotr Bagration. Bagration was wounded and Konovnitsyn led the defense of the left flank.

In 1813, Myagkov continued to pursue Napoleon’s army outside of Russia - he fought under Dresden and Leipzig and reached France. In 1815, he participated in a foreign campaign in Poland and Prussia. In 1822, the officer received his resignation and returned to Voronezh in the rank of captain, with a silver Hero of Russian medal.

During the campaign abroad, the officer managed to marry Yulia, the daughter of Professor Lorenz Vogelman, and the couple came back together. Their daughter Nadezhda was born in Voronezh.

In the early 1820s, the captain began the construction of a two-story house in the architectural appearance of which he decided to reflect the pathos of the victory in the Patriotic War. In the corner of the house, he “encrypted” a symbol - a triumphal arch formed by four solemn half-columns and a two-tiered attic. 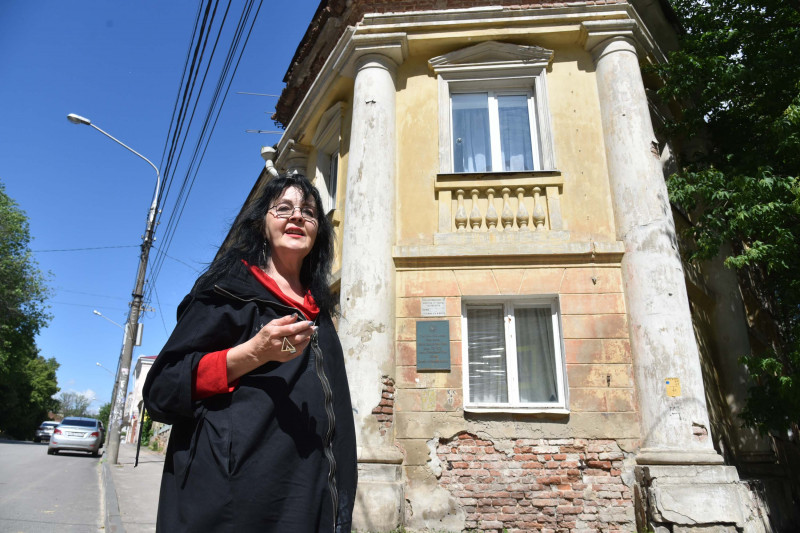 Triumphal arches were erected on roads in honor of victors and in memory of important historical events. The image of an arch on the house emphasized that it belonged to a brave victor. Although the half-columns in fact form a regular quadrangle.

“Indeed, this is not quite an arch. But the design of the house is made similar to that of a triumphal arch. Interestingly, on the one hand, the house is small in size, there are not that many decorative details and stucco moldings on its facade. On the other hand, it has several expressive elements. Architects were able to create a beautiful concept of a building with such inexpensive means,” Pavel Popov stated. 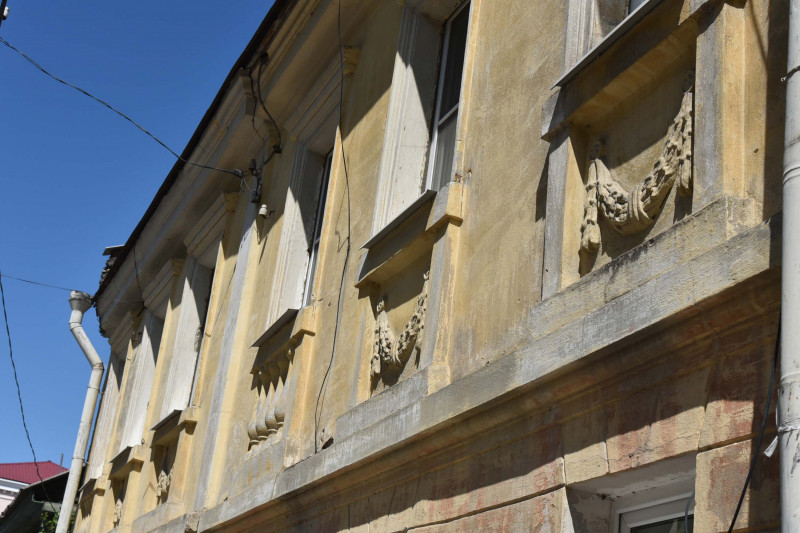 To finish the construction of the mansion, Myagkov started long-standing litigation. He began to sue his ex-commander Nikolai Davydov, who lived in Zadonsk County and became Myagkov’s debtor during the Patriotic War of 1812.

During the war, the country’s treasury did not have enough funds to support the troops. In particular, the Moscow Dragoon Regiment did not receive money from the state for feed grain for its horses. There was nothing to feed them with, and the officers were forced to chip in to feed the animals. They lent the money to the commander of the regiment, Major General Nikolai Davydov, who took upon himself the obligation to return it if the state refuses compensation. Myagkov gave Davydov 8.4 thousand rubles in banknotes and later lent him smaller amounts several times. And after the war, the state in fact did not return the money to the officers.

In 1823, Davydov died, and Ivan Myagkov began suing the heirs of his former commander. In 1824, the Zadonsk Court ruled in favor of Myagkov. Davydov’s relatives were supposed to pay the captain the initial sum together with interest - twice as much as at the beginning. But they did not have this kind of money.

“Davydov’s heirs started paying only in the 1840s when Myagkov’s complaint had reached the Senate,” added Pavel Popov.

Ivan Myagkov died in 1872. His actual tombstone has not been preserved. 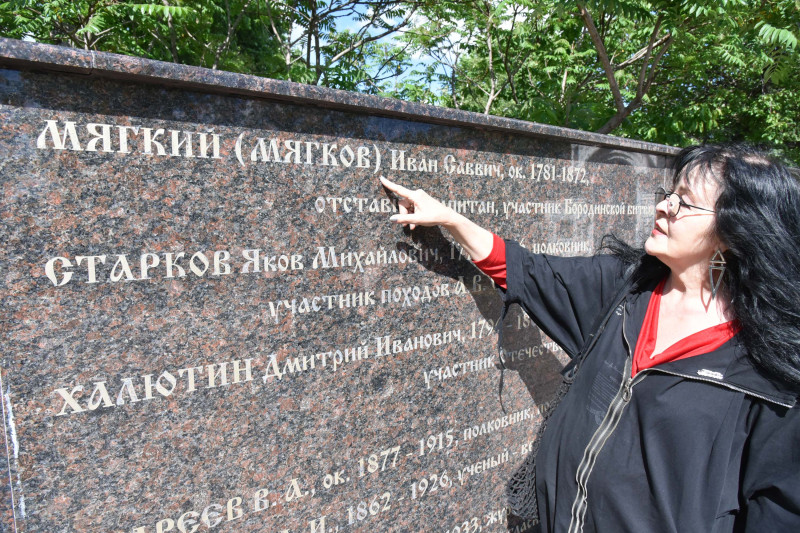 "Greetings" from the old times

The architect of Myagkov’s House is unknown. Voronezh historians and local historians did not know the name of the first owner of the estate until Pavel Popov managed to find archival data.

“I found documents in the State Archives of the Voronezh Region stating that Myagkov requested a certificate for a two-story house located on this very spot,” the historian noted.

The city architect Ivan Blitsyn made a thorough inventory of the house and even calculated the number of bricks of which it was built - 152 thousand. He specified that the house had five separate chambers, two basements with vaults. Myagkov did not have time to finish the upper floor of the mansion. There was also a shop in the house. 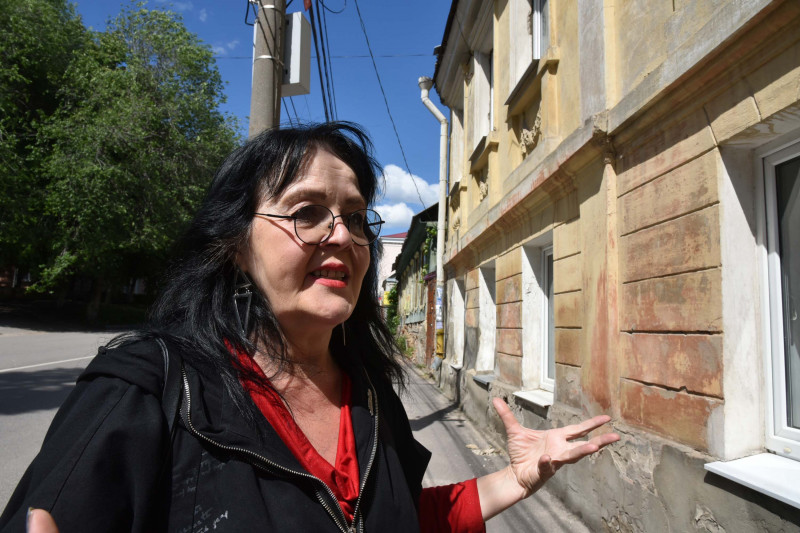 “It can be assumed that these door hinges are already 200 years old. The door was metal. It led to a hardware store. This is logical - the famous Devichkovsky Market is located nearby,” Olga Rudeva told.

On the bricks of the monument, there were other "greetings" from the old times - the so-called counting marks left by the craftsmen making raw bricks.

“Every hundred bricks were marked with dots so as not to be mistaken and not to count individual bricks for the second time. For example, four points mean that it is the fourth hundred of bricks,” Olga Rudeva explained. 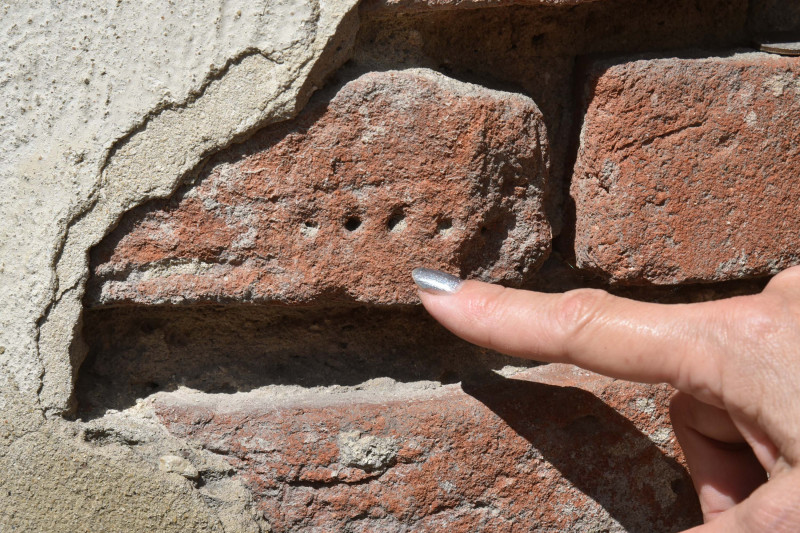 After the death of Myagkov, his house was bought by a gymnasium teacher Yakov Ryabokonev, who expanded the estate toward the courtyard and supplemented it with one-story uninhabited brick extensions from the current Sacco and Vanzetti and Kommunarov streets.

Since the end of the XIX century, the house was owned by the Trushevsky family of nobles. Pavel Popov suggested that the owners could roughen the facade at the beginning of the XX century during the repairs of the house - as a result, some decorative details had disappeared:

“Pre-war photographs show that the two corner windows on the first and second floors used to be wider. They were three-part and divided by partitions - imposts. Apparently, the window openings were changed during the post-war reconstruction. 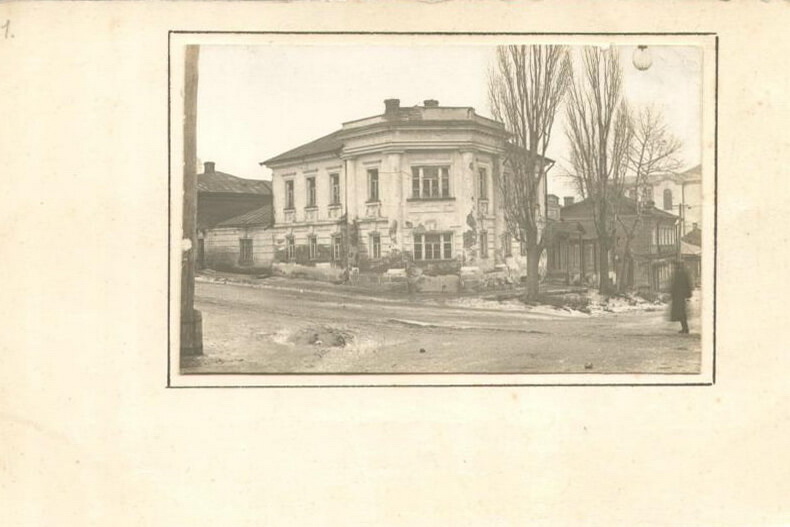 The heirs of the Trushevsky nobles are remembered by Kira Obraztsova, who used to live in Myagkov’s House in early childhood, before the war.

“Marya Afanasevna Trushevskaya and her husband Vladislav Genrikhovich occupied the second floor, and we lived on the first. In our apartment, which was in the corner of the house, there were Italian windows. I loved to climb onto the windowsill and wait here for my parents to return from work. My dad was a teacher of drawing and geometry at the Agricultural Institute, my mother was a stenographer before the war,” Kira Ilyinichna told.

When the war began, her father went to the front and the girl and her mother were evacuated to Kemerovo.

“When we returned, we had absolutely nowhere to live - our house had been destroyed,” added Kira Obraztsova. “The Trushevsky family offered my parents to rebuild it, but they had no money for the restoration...”

For three years, the girl lived with her father and mother in private apartments. Then the parents set about restoring the old Aristovs' House (61 Sacco and Vanzetti Street) located opposite Myagkov’s House. It was where they had subsequently settled.

After the war, Myagkov’s restored house was expanded: it was lengthened by two windows from Kommunarov Street’s side and by three from the side of Sacco and Vanzetti Street’s. The one-story non-residential extensions received a second floor. The ancient decor elements - four half-columns, the rectangular attic, the platbands – were restored. At the same time, the house was decorated with new decor in the style of Stalinist classicism or the Stalinist Empire. Triangular ends – cornices - were placed above the windows, balusters were made in the window sills. 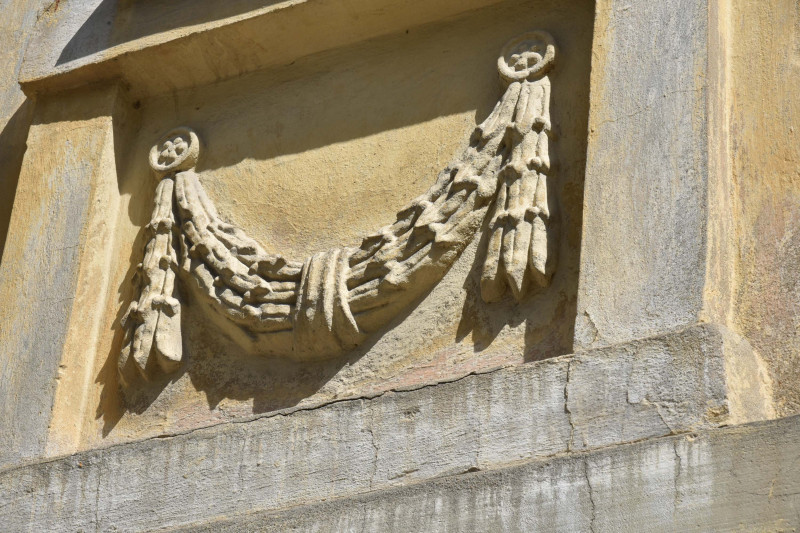 “Myagkov’s House is an example of how the elements of the empire style of two eras have intertwined in one estate: the Empire of the Napoleon era and the Stalinist Empire. The metropolitan art critics, having seen the monument, even doubted that the elements of classicism on its facade were genuine. They thought they were made after the war. But I found a photograph from the 1920s on which Myagkov’s House is captured with genuine half columns, the attic, and platbands,” Pavel Popov shared.

Basement with vaults and emergency pipes

Now Myagkov’s House has a small but at least cozy courtyard. According to some reports, "streetwalkers" had settled in one of the apartments several years ago. The quiet and peaceful life in the monument-house came to an end. However, the tenants successfully managed to evict the "women of easy virtue" through court. 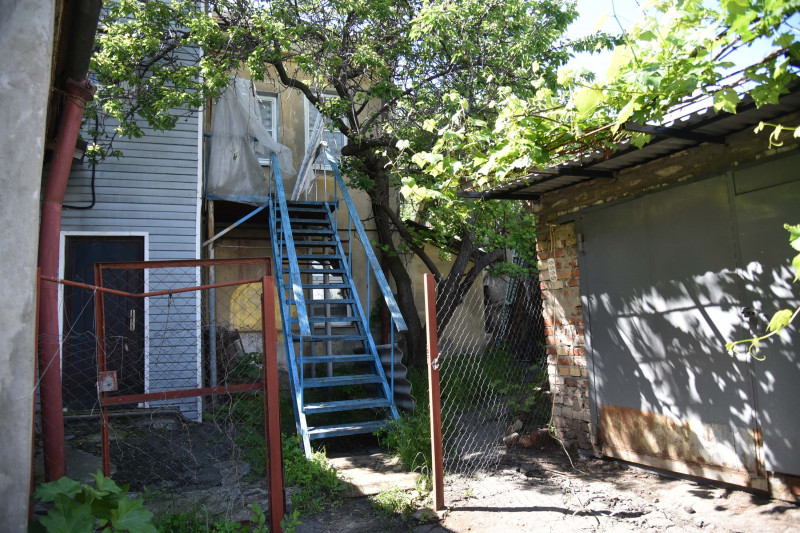 The monument still has an old basement with a vaulted ceiling. Inside are arched window openings that are now blocked. 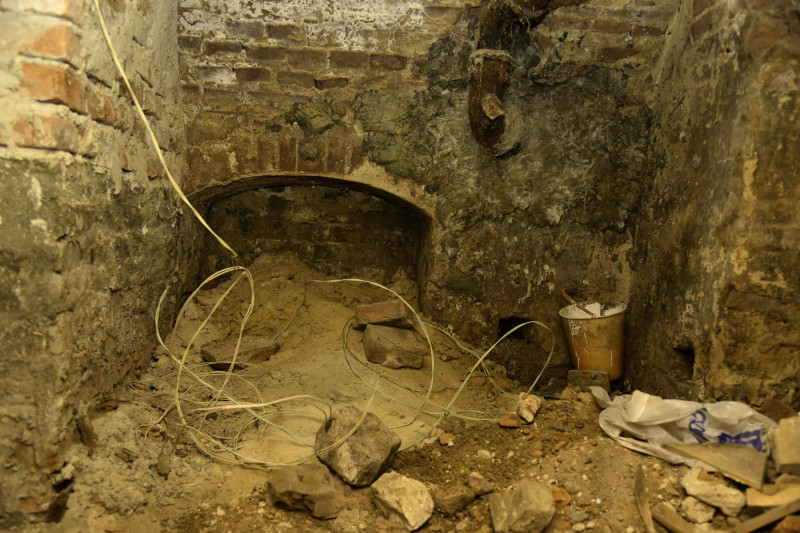 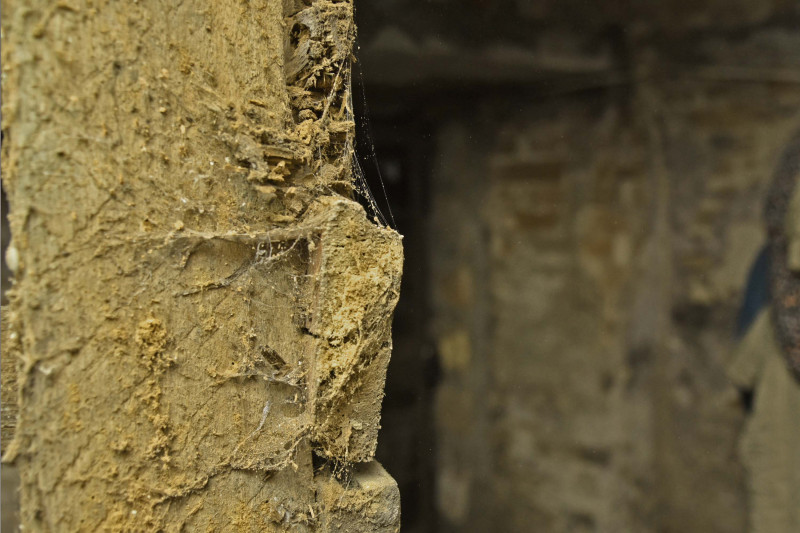 The building is in poor condition. The brickwork of the upper part of the cornice – the attic – has collapsed. The roof is leaking. In 2019, bricks nearly fell on a woman with a child passing by the monument. Only by a miracle did they manage to run away. 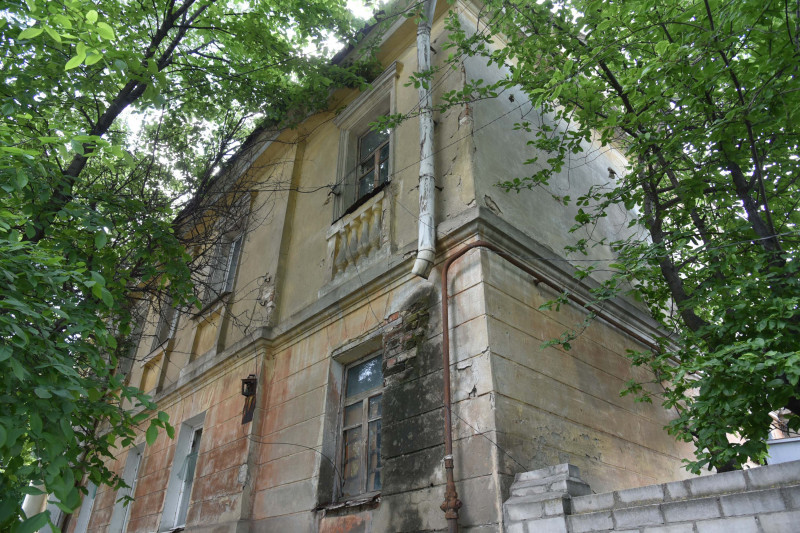 The press service of the Overhaul Fund of the Voronezh Region told the RIA Voronezh correspondent that the building number 44 on Kommunarov Street is included in the short-term schedule for 2020–2022: 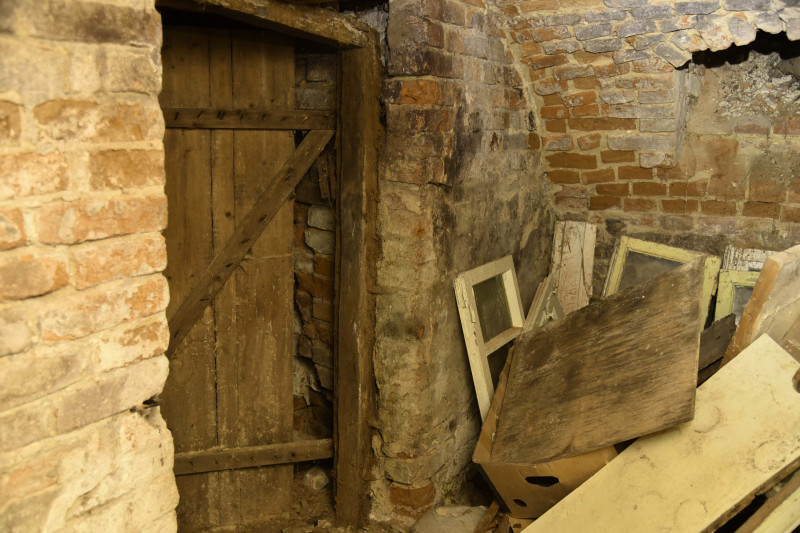