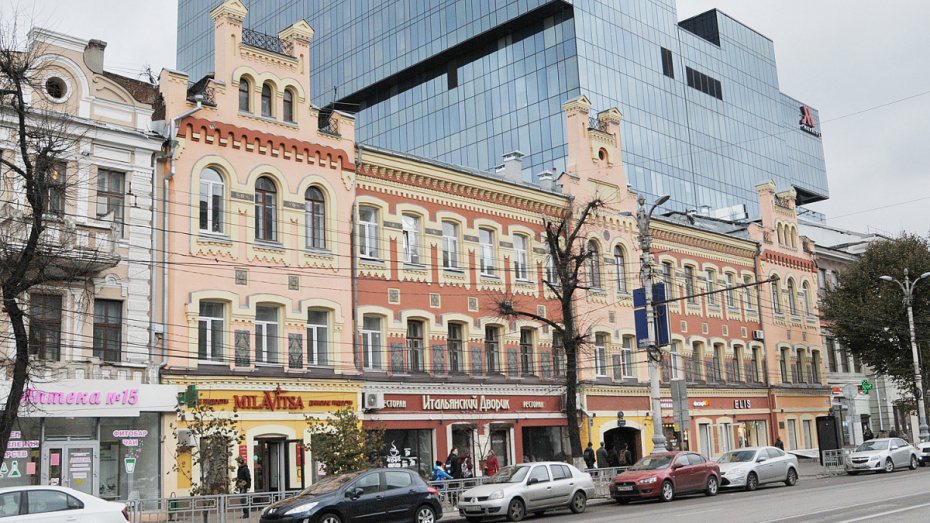 A special project dedicated to the city’s showplaces.

At the center of the latest issue of the special Legends of Voronezh project is the story of one of the most elegant buildings of the central street of the city - the former Central Hotel, which belonged to the merchant Dmitry Samofalov. The building (44 Revolution Avenue) with eclectic shapes, generously decorated with colored tiles with floral patterns, stands between the TsUM (Central Department Store) and the building where the poet Alexei Koltsov used to live. The building served as a place of stay for writers Anton Chekhov and Gleb Uspensky, poet Vladimir Mayakovsky, and in the post-war years – for the family of political prisoner Boris Batuev, a friend of the Voronezh poet and writer Anatoly Zhigulin. 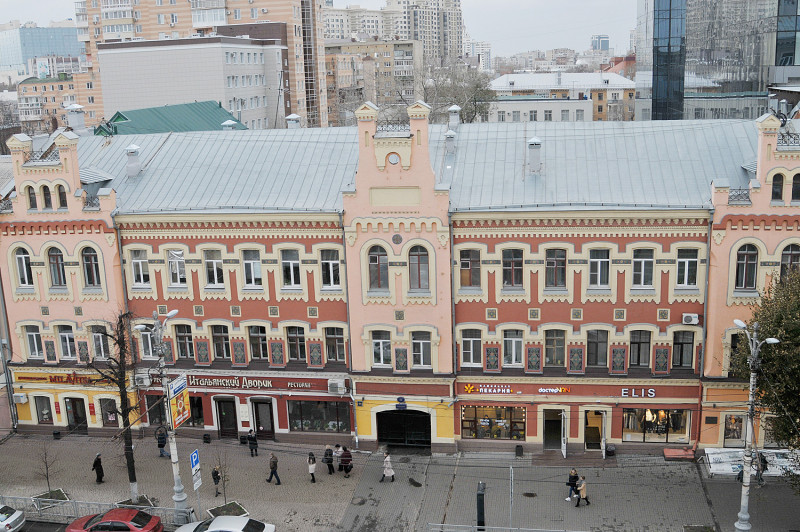 The millionaire merchant Dmitry Samofalov left a mark in the history of Voronezh as a predator capitalist who stopped at nothing. He was the owner of a bell plant and a co-owner of a steam mill of the “Second Partnership of Russian Flour Millers”; he also owned several apartment buildings. In addition, he was a ruthless loan-shark who had made many of the townspeople, unable to pay off their debts, go bankrupt.

– Writer Vladimir Korablinov called him a “world-eater”, i.e. an exploiter. He was not notable for great charitable deeds, although he was a member of charitable organizations and made occasional donations, but not more than 1 thousand rubles. What is 1 thousand rubles to him if he was a millionaire, the biggest Voronezh capitalist of the late 19th century? – historian and writer Pavel Popov noted.

In 1878, Samofalov started building a hotel on Bolshaya Dvoryanskaya Street (currently Revolution Avenue), which opened its doors in 1880. 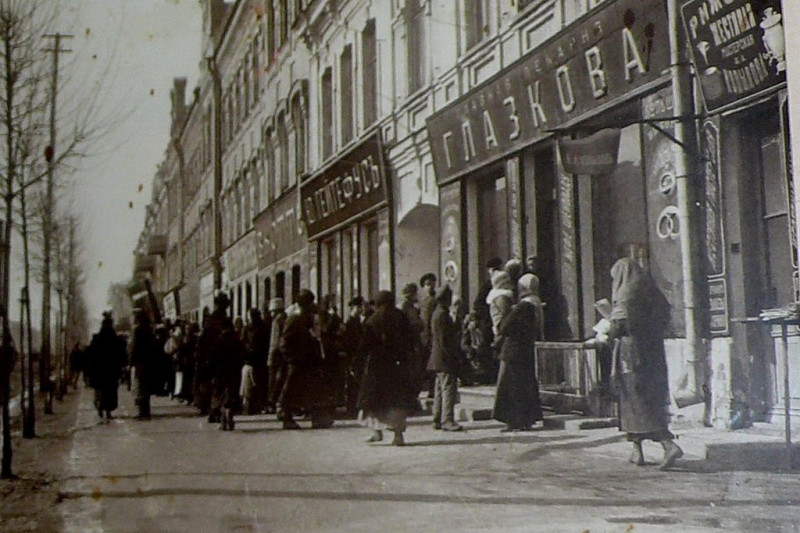 Against the background of one- and two-story buildings, the huge three-story hotel looked like a monster, the sight of which made the same impression on Voronezh residents as its giant neighbor, the Marriott Hotel, does in the 21st century. Although, specified Pavel Popov, the three-story building of the theological seminary (29 Revolution Avenue) had appeared on the city’s central street even earlier. For that time, the hotel had fanciful, even provocative architecture. The facade was made with lavish decor: stone carvings on the ledge, colored ceramic majolica tiles, elegant casing moldings and turrets on the roof.

Initially, the building was not plastered – the old postcards show that it was covered with colored whitewash. According to Pavel Popov, the author of the building was the architect Viktor Pereverzev, who had worked at the Municipal Council of Voronezh for many years. His designs were used in the construction of the Mariinsky Gymnasium (32 Revolution Avenue), the Voronezh Theological School (24 Revolution Avenue), the Trinity Cathedral building (32 Nikitinskaya). He also erected a large complex of buildings in Boguchar - the Municipal Council of Boguchar District. 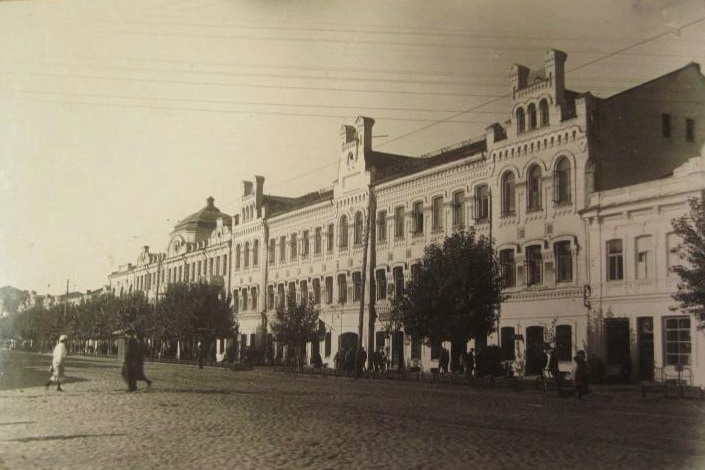 – Why he? The archive has preserved his project of the Voronezh tobacco factory - very similar to the Central Hotel in terms of composition. The factory has not remained. But the facades of it and of Samofalov's hotel are very similar – it is safe to say that they were duplicated. Viktor Pereverzev died several years after the construction of the hotel, in 1884, during the 54th year of his life, – Pavel Popov said. – Samofalov himself lived not in the hotel but nearby, in the building №46, where poet Alexei Koltsov had lived 40 years ago. The merchant did not wreck the building but rebuilt it instead. He reconstructed the facade in a trendy style, expanded the mezzanine on the second floor, where Alexei Koltsov lived, and added the third floor, where he settled in himself. He leased the two lower stories.

In addition to money, Samofalov had power: he was a member of the City Council and, when another hotel had opened in front of his own, he did everything to ruin his competitors. But the methods of Samofalov did not seem to trouble the majority of wealthy Voronezh residents — they elected him to the city’s self-government bodies to protect their interests.

­­– The councilors who did not like the merchant did not dare to oppose him – they were afraid that he would ruin them, – Pavel Popov explained. 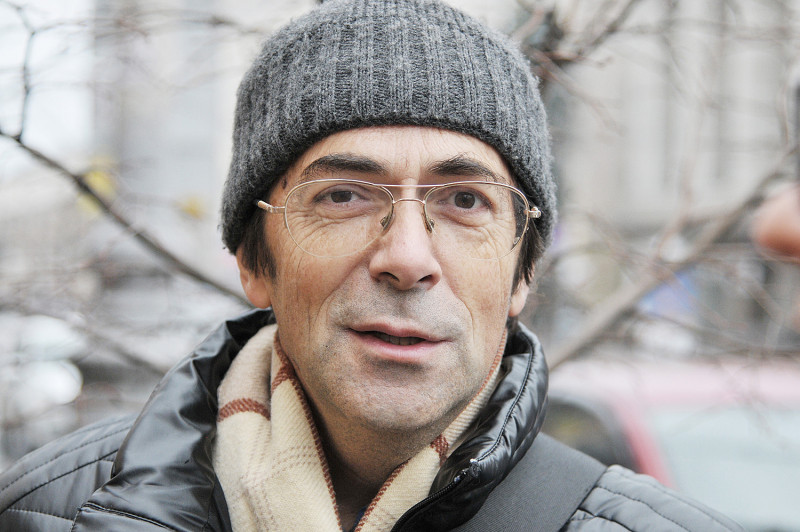 From 1888 to 1891, Samofalov was the city mayor. He was elected by the City Council, which included conservative capitalists. It took them a long time to persuade Samofalov - it was believed that strong business executives like him strengthened the city budget and did not spend anything extra. Samofalov agreed only when members of the City Duma came to his house. During his rule in Voronezh, they finished designing a horse-drawn railway line from the station on Bolshaya Dvoryanskaya Street to the Novostroyashcheesya Cemetery, which is nowadays replaced by the Circus and Durov Park.

During the First World War, Voronezh society was so opposed to Samofalov that the millionaire ended up in court. There was a laundry located on Bolshaya Devichenskaya Street (currently Sacco and Vanzetti Street) in one of the apartment buildings that belonged to the merchant. The manager of the building, annoyed with the dampness due to constant washing, ordered to turn off the water tap in the laundry room and paralyzed its work. But it was not the manager who went to court for arbitrariness, but the owner of the apartment building. The court even sentenced the merchant to arrest. Whether Samofalov served time in prison is unknown.

In 1917, the merchant was distinguished by a generous act - he handed his estate with the Kievskoe Podvorye (Kiev Compound) Hotel (1, 3, 5 Platonova Street) over to the city.

In 1918, the building of the Central Hotel was captured by anarchists. They took the merchant Samofalov hostage and demanded a ransom of 25 thousand rubles. He gave this sum to extortionists and remained alive.

– For a long time, local historians believed that Samofalov left the city with the royalists, like most merchants and nobles – the Red Army could execute them. But recently, they have found documents showing that the merchant went “under the radar” and continued to live quietly in Voronezh in the 1920s, – added Pavel Popov. 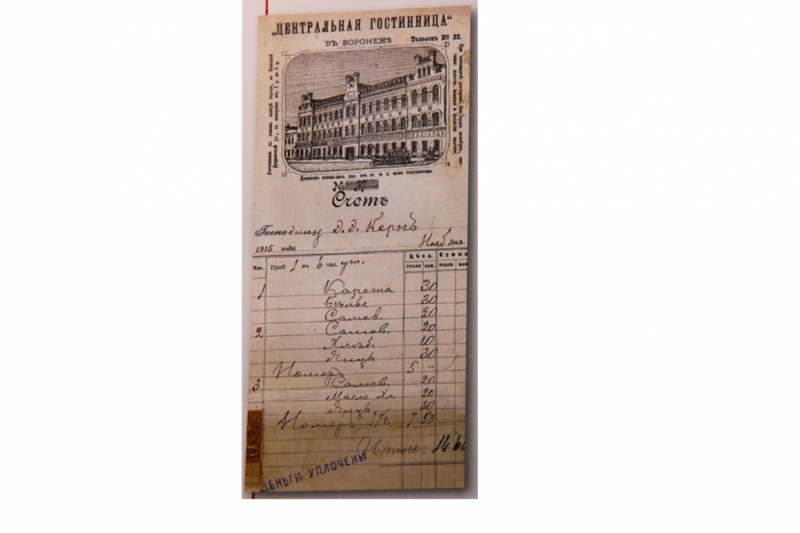 The Central Hotel Central was in good standing with the guests of the city, so it was chosen by celebrities. In February 1890, writer Gleb Uspensky, who was traveling to Rostov in search of new impressions for his essays on village life, stayed here. But he never reached his final destination - his health let him down and his money ran out. The trip could not be continued, so he had to return to Moscow. 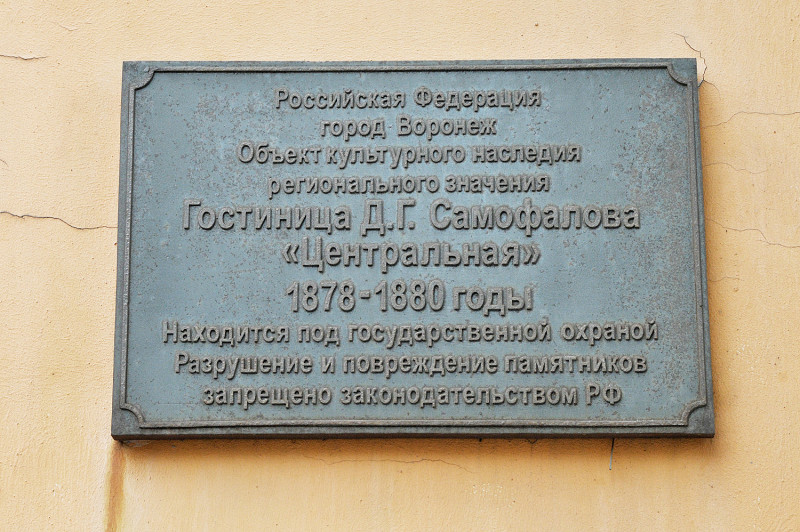 In 1891-1892, there was a famine in the Voronezh province. Due to the hunger, metropolitan guests came in Voronezh - the famous writer and playwright Anton Chekhov and his publisher and patron Alexei Suvorin, who wanted to donate money to the starving peasants. They spent five days in Voronezh. During their stay, they met with the governor, an organization engaged in charity fundraising for starving peasants, went to the Winter Theatre, where they watched a vaudeville based on Chekhov’s play The Bear (the money collected was sent to the starving). Later Suvorin and Chekhov went to Korshevo, Bobrov and the village of Khrenovoe. Local historians suggest that writer Ivan Bunin stayed at the Central Hotel in January 1907. He came to his hometown to participate in a soiree held in favor of the Voronezh fellow-countrymen association. He described his arrival in Voronezh in the short story Natali. The Dvoryanskaya Hotel mentioned in the story is obviously Samofalov's hotel.

“The train came all white, smoking with snow from the blizzard. On the way from the station to the city, while the cab sleigh carried me to the Dvoryanskaya Hotel, the lantern lights flickering through the blizzard were barely visible. But after being in the countryside, this city blizzard and city lights were exciting, promising the close pleasure of entering a warm, even too warm room of an old provincial hotel, asking for a samovar and starting to change your clothes, to prepare for a long ball night and drinking until dawn.”

Poet Vladimir Mayakovsky stayed at the hotel on November 22, 1926, having arrived in Voronezh for the poetic evening My "Discovery of America" held at the city’s Winter Theatre. He returned to the hotel room in the morning, after a night tea at the house of the Voronezh doctor Mikhail Rappoport, where he was invited by fans from the Chernozнem literary group. Rappoport’s house was located at 7 Vaytsekhovsky Street, but is now destroyed.

In 1918, the First House of Soviets, the main headquarters of the Bolsheviks, was located in building № 46. The Bolsheviks also occupied the former hotel. 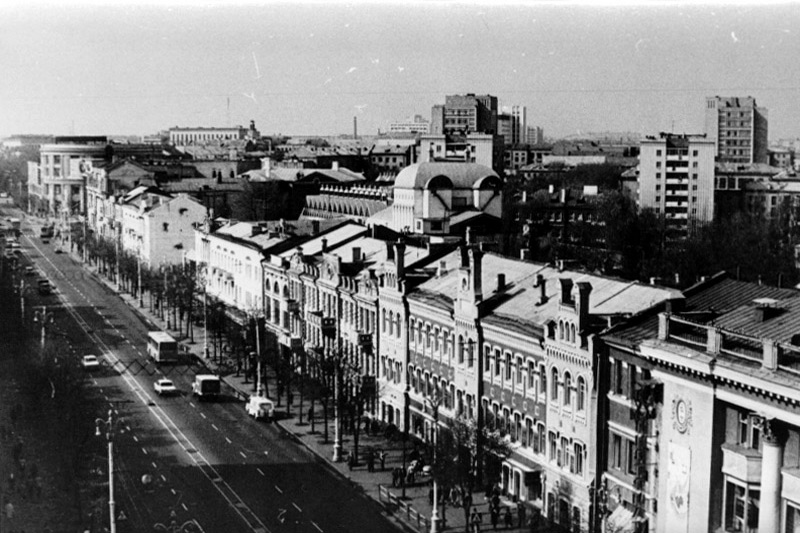 After the end of the Civil War, the Central Hotel was reopened in Samofalov’s house. The building remained under this sign almost until the Great Patriotic War. By the way, in the wartime, it served as the canteen of a factory and plant education (FPO) school for children. On the day of the bombing of the Garden of Pioneers (between Revolution Avenue and May 11th Street, which is currently Teatralnaya Street) – on June 13, 1942 - they will also become victims of a Nazi massacre.

That day was a pioneer holiday, where several hundred children had gathered. Suddenly, a rumble was heard from the left bank - it was a Nazi plane that dropped several bombs on the center of Voronezh. The first ones fell into the Garden of Pioneers, right into the midst of the children. The Nazis dropped other bombs on the building of the former printing house of the Kommuna newspaper, the Officers’ House (at the time, the House of the Red Army), the menagerie behind the assembly school and a zoo across the road from the Kommuna printing house, behind the Central Hotel. Here, just as in the Garden of Pioneers, it was children - students of the FPO school located behind the hotel and near the zoo - who had suffered: 11 were killed, another 11 were injured. This data was cited by Pavel Popov referring to a document from the State Archive of the Socio-Political History of the Voronezh Region. He noted that the bombing took the lives of about 30 Voronezh children. The total number of people injured in the city was 247. According to eyewitnesses, about 100 adults and children had been buried.

– On the monument standing on the site of the tragedy, it says that 300 children died in the Garden of Pioneers that day. But this number is exaggerated by ten times, – Pavel Popov stressed.

The hotel building itself suffered little during the war. But there is a photograph of Revolution Avenue where it can be seen that its roof and ceilings had burned. That is why after the war the appearance of the house had changed. 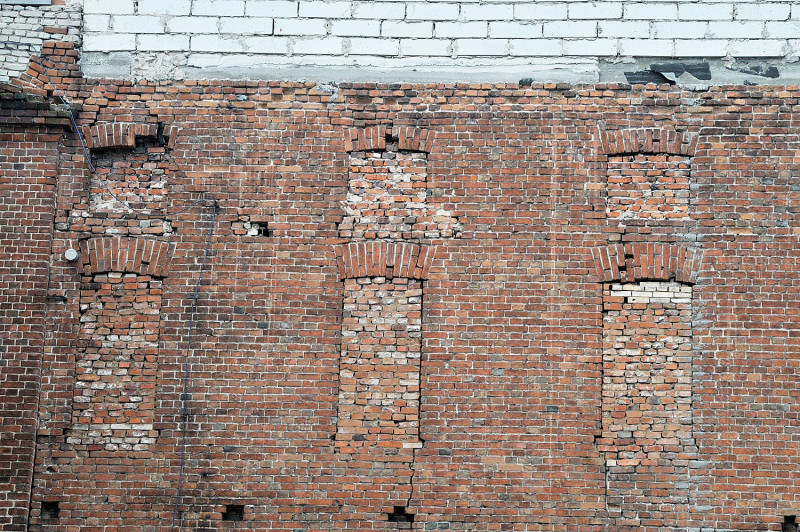