"Material of the future". Exhibition of recycled plastic items is brought to Voronezh 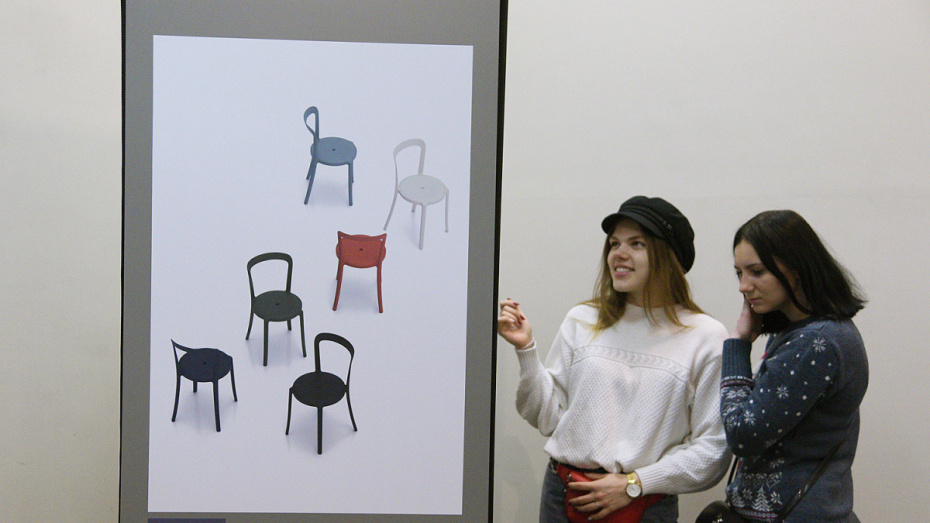 The exhibition will host educational events.

The exposition Fantastic Plastic opened in the exhibition hall at 8 Kirova Street on Friday, January 24. The exhibition from the Moscow Museum of Design will run in Voronezh until February 7. Admission is free.

The exhibition Fantastic Plastic includes objects and images of objects created from recycled plastic or recycled plastic items. The exhibition features the work of more than 30 designers from Russia, the Netherlands, Switzerland, Finland, Belgium, Austria, Australia, the USA, Great Britain, Italy, and other countries.

The RIA Voronezh review includes the most interesting exhibits from recycled plastic. 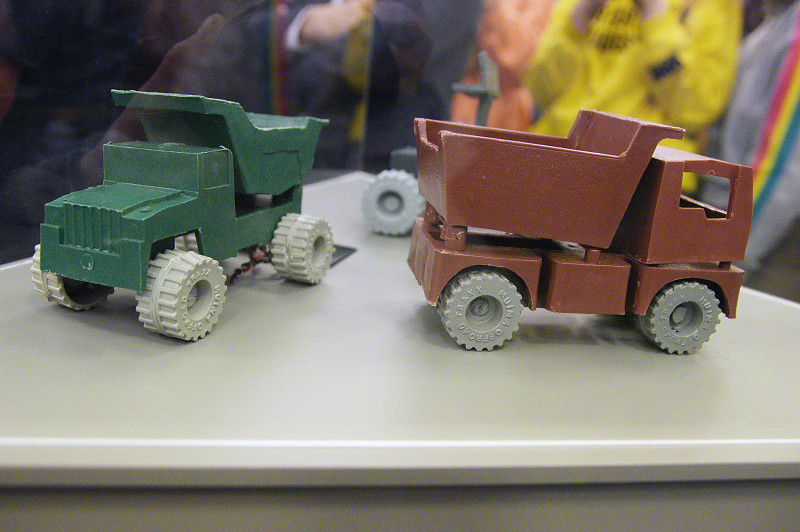 Two graduates of the Netherlands’s university of design traveled to Kenya and found plastic-clogged cities there. At that moment, there was literally but one company in the country that collected this garbage and tried to recycle it. Specifically for this company, the young Dutch designers developed a technology with which such toy cars could be made from the collected plastic. In addition, they created a sales market for it in Europe - today these cars can be bought in designer and museum shops – in fact, getting one is not easy: the employees of the Moscow Museum of Design could not find several copies for their collection for a very long time. Now 11 Kenyan families work at this enterprise, and all the income from the sale of toys goes to them. They still collect plastic in ordinary Kenyan cities, which are heavily polluted.

“Anything can be made of plastic, the only restriction is the designer’s imagination,” said Olga Druzhinina, the curator of the exposition and the development director of the Moscow Museum of Design. 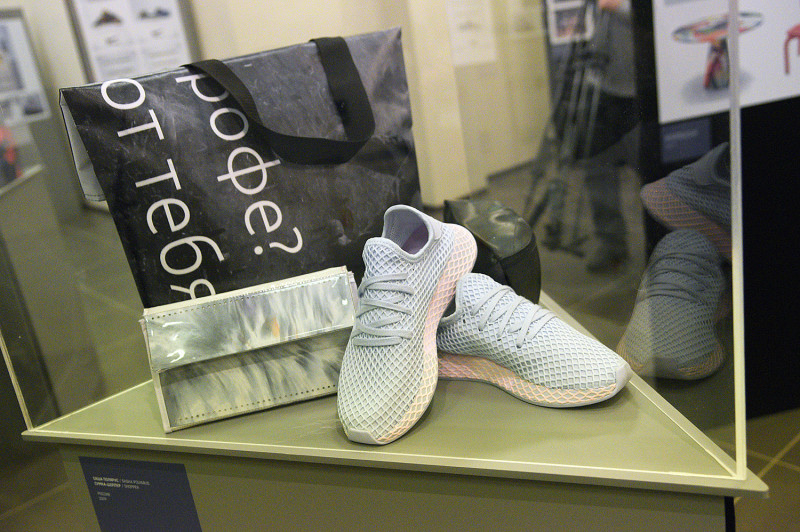 This is an example of how large companies interact with designers working with recycled plastic. Adidas invited famous designer Stella McCartney to develop sneakers partially made of recycled plastic. This model was one of the first on the world market, after which other major companies in the fashion industry also began producing similar things.

“These sneakers are just as comfortable and hygienic as we are used to, but more durable because of the strength and durability of this material. And this is another level of sustainability, because the service life of such shoes is longer, which saves us from having to buy a new pair - and therefore, from excessive consumption. With the right approach, plastic is the material of the future,” Olga Druzhinina noted. 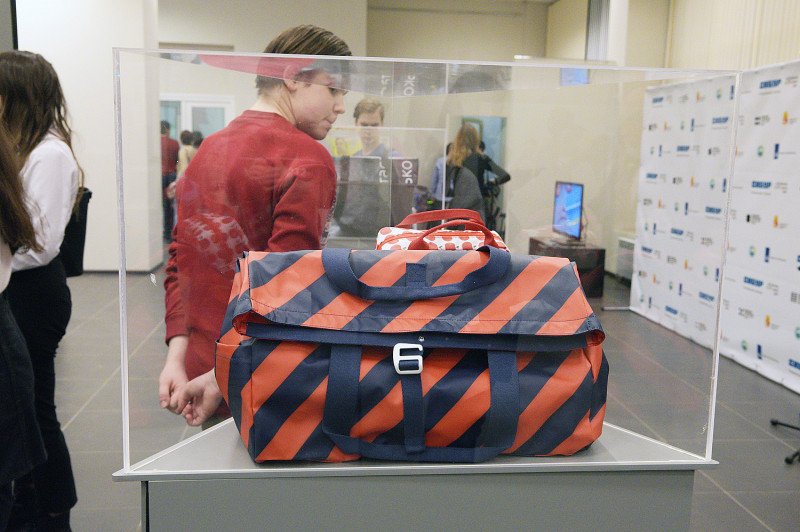 This is the work of Russian designer Sasha Polyarus, who became a designer just recently. During the FIFA World Cup, she worked in the advertising department of a large company and worked on banners. When the championship was over, the company was left with an incredible amount of banners with which nothing could be done except throwing them away. Then Sasha came up with an idea to make bags out of these banners. Since then, she has completely changed the profile of her work, she is no longer engaged in advertising. Today, in addition to the used banners, she also uses old bicycle tires as the material for her bags.

“This is a slightly different approach - not the recycling of plastic but its secondary use. The thick banner material turned out to be very suitable for making bags: it is durable, indestructible and almost eternal. Another similar project featured on the display stand was presented by Swiss designers: the company sews bags from canvases used for curtain-sided trucks,” says Olga Druzhinina.

In Voronezh, Sasha Polarus will give a lecture named Conscious Consumption on Tuesday, January 28. Admission is free by registration. 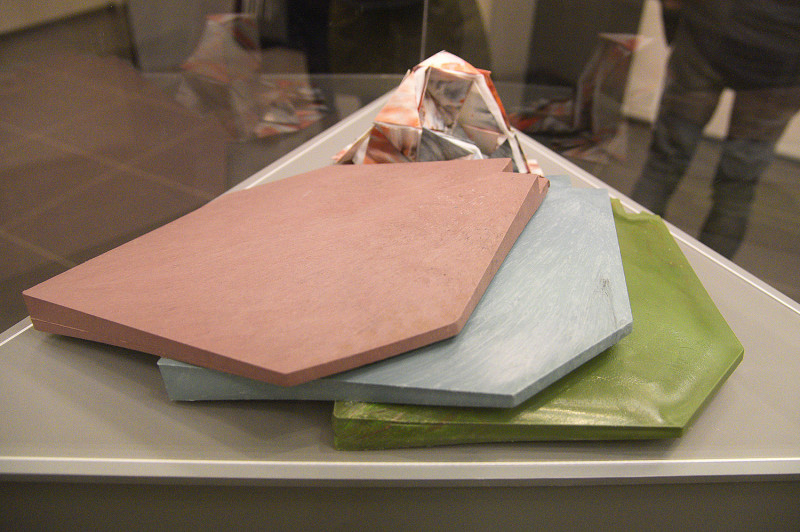 Specifically for Design Week in the Netherlands, a pavilion was created, assembled from items borrowed from local residents with the condition of returning them after the end of the festival. All the walls and interior decoration were made of such materials. And the designers, having processed the same plastic collected from the people, used it to create roof tiles - durable, wear-proof and waterproof. Its success at the festival was so great that the company began exclusive production of it and now the roofs in many Dutch cities are covered with this plastic tile. 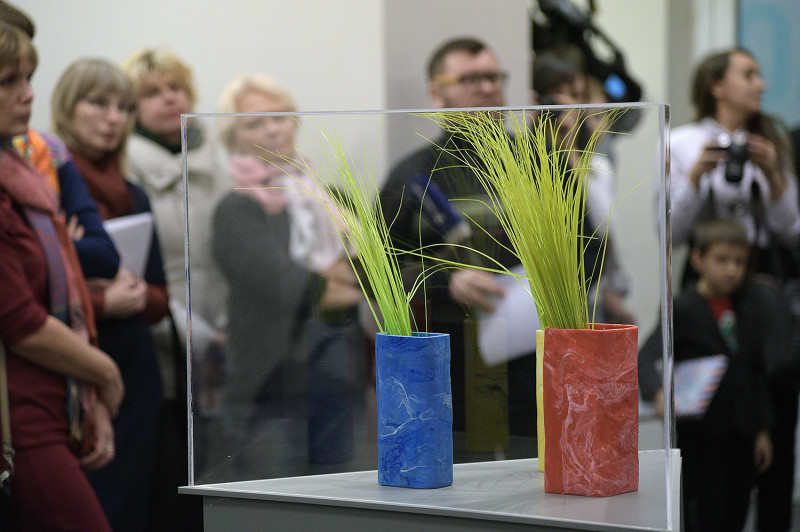 These products are an example of how plastic can mimic any other material. The exhibition features plastic products that look like wood or stone. In this case, the designers sought to achieve a resemblance to the structure of marble. These vases are very durable, they come in different colors and will fit any interior. 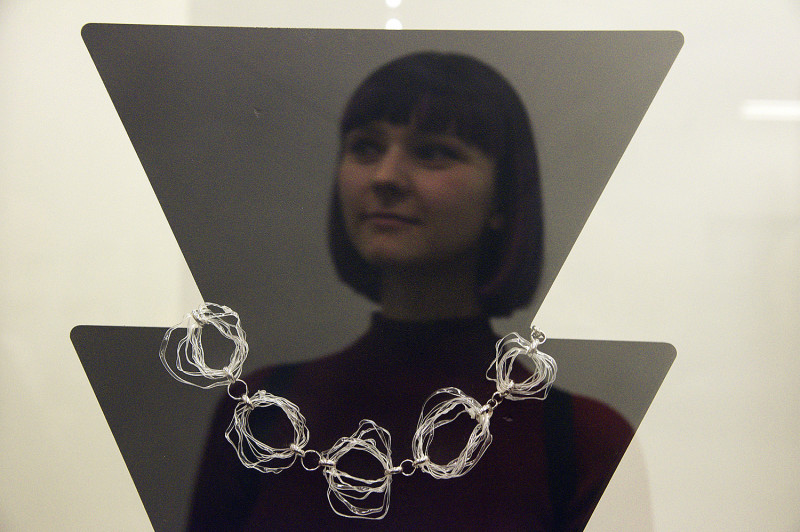 Moscow designer Yekaterina Lukyanova is a jeweler by education. At some point, she became tired of working with gold, silver and precious metals and stones and decided to look for new material so that upon seeing the product one could not guess what it was made of. The girl focused on lifespan-expired and useless plastic bottles.

“This is not mass production, so far this has been made in a small creative workshop. But in any case, this is a very interesting approach, and for a person seeing these space bracelets and necklaces it is absolutely impossible to guess that they were once ordinary bottles,” Olga Druzhinina told.

The exhibition also features chairs made of bottles by Western designers, vivid carpets made of material that, thanks to special processing, has become non-combustible, children's furniture, interior items and even an entire cafeteria where everything - from wall decoration to utensils - is made from recycled Tetra Pak packaging.

“The most interesting thing was facing the variety of objects that we saw. Our exhibition is exactly about this - about how much can be done from recycled plastic. It’s hard to say when Russia will come to the full acceptance of the idea that plastic needs to be recycled and reused. But it seems to me that we can make it faster than the people of European countries by using their experience and best practices. Among other things, with our exhibition we wanted to show that this experience has already been accumulated, it can be used to move further,” curator of the exhibition and deputy director of the Moscow Museum of Design Olesya Konoreva stressed.