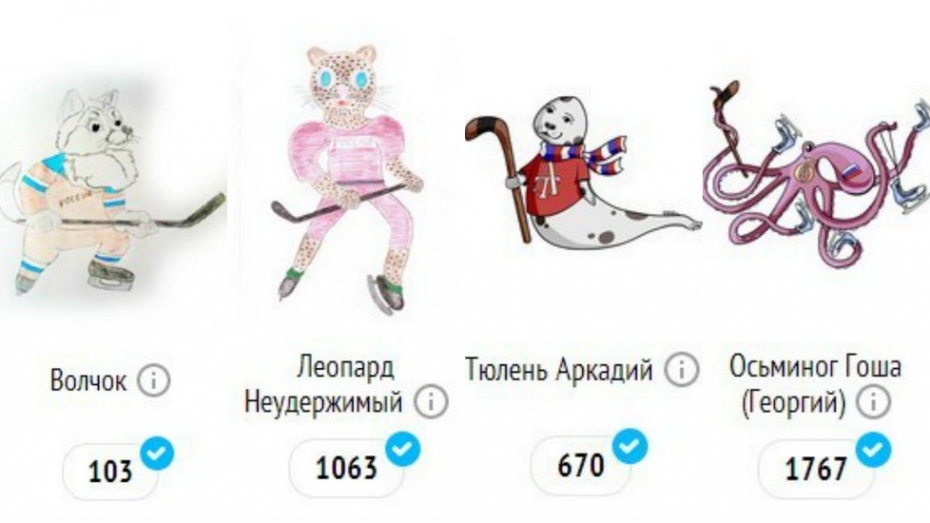 The total number of works to pass the preliminary selections is 500.

Four works of Voronezh citizens passed the preliminary stage for the 2016 Ice Hockey World Championship mascot contest which will take place in Moscow and St. Petersburg – this was reported to the RIA “Voronezh” correspondent by the organizing committee on Tuesday, March 3.

Voronezh natives suggested “Wolfy” (103 votes by the evening of March 3), “Leopard the Irrepressible” (1063 votes), “Arkady the Seal” (670) and “Gosha the Octopus” (1767 votes) as the mascot. By the way, the seal and the octopus were suggested by the same female contestant.

- We selected the total of 503 works out of 600 sent ones, - the RIA “Voronezh” reported was told in the organizing committee.

The Voronezh octopus is one of a kind while other animals are repeated. For example, the mascot competition includes ten versions of wolves, three seals and two leopards.

The works of Voronezh citizens are far from being in the lead. For example, Grigory the Mouse has already collected 405 thousand votes, Bunny the Hockey Player – 336 thousand, Khlopik – over 127 thousand, Puck-Eater – almost 108 thousand, Prekras the Cat and Sailor the Cat – over 90 thousand, Togo the Bear – 72 thousand.

The voting will continue on Championat.com website until March 16 of 2015. It will result in selecting 20 contestants who will pass on to the next stage. From March 20 to 24 experts, celebrities and sportsmen will be selecting four challengers for the super finals one of which will become the 2016 World Championship mascot. The final decision will be made by the jury which will include representatives of the Ice Hockey Federation of Russia and the International Ice Hockey Federation. The winner will be selected by March 30 of 2015.

In 2015, mascots of the Ice Hockey World Championship will be rabbits Bob and Bobek.