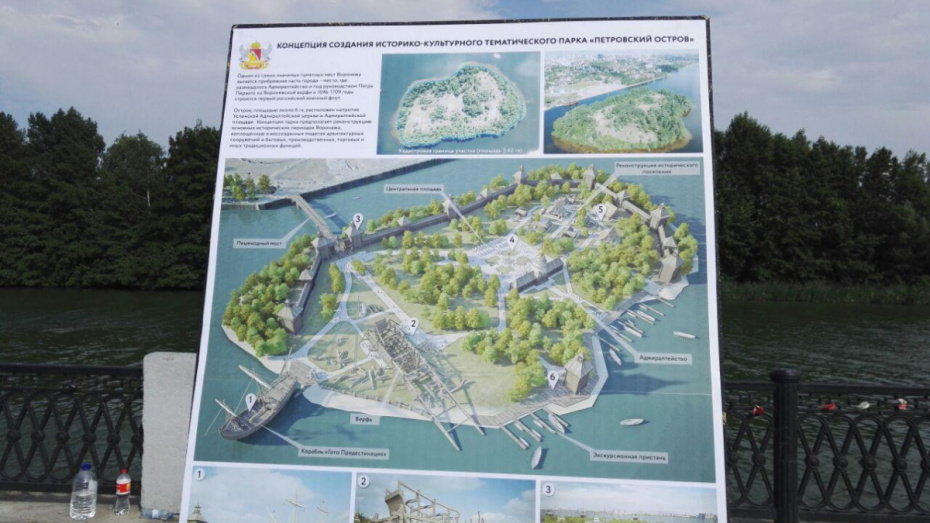 The project should be finalized by October 2019.

A small copy of the 17th century Voronezh Fortress may appear on Petrovsky Island. This became known during the retreat with Governor Alexander Gusev on territory development on Monday, June 24. Historical reconstructions, festivals, fairs, and theatrical performances are planned to be held on the central square.

According to the concept presented to the Governor, six small and nine large wooden towers and a 410 m long fortress wall will be built along the island’s perimeter. Administrative, exhibition and club premises will be placed inside them. It is assumed that a pier will appear in the eastern part of the island, and a shipyard will appear in the southern part of the island, so the fortress walls will be open in these locations. 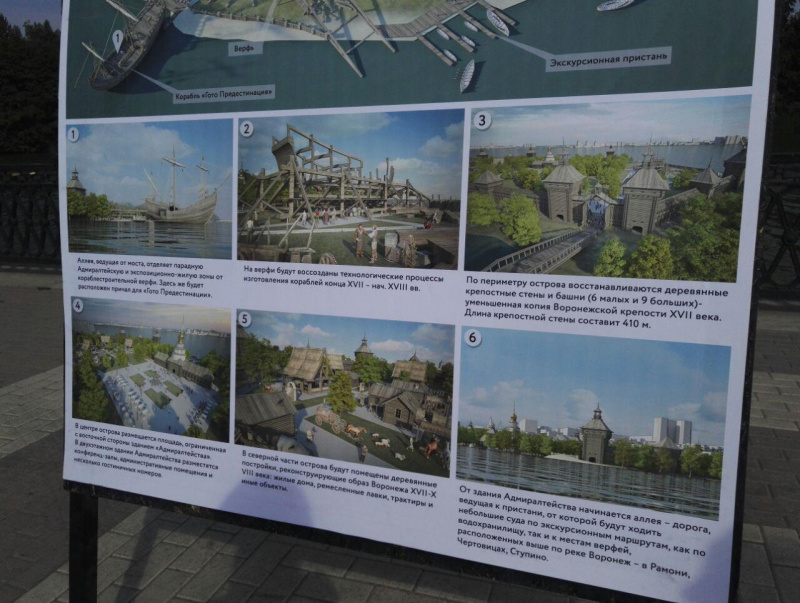 Residential houses, handicraft shops, and taverns will be erected in the northern part of the island, which will recreate the image of Voronezh in the XVII-XVIII centuries. Guests will be able to enjoy museum exhibits illustrating the life of citizens of that time, eat in a cafe of traditional entertaining catering, shop in souvenir shops, and also go to pottery and weaving workshops.

An area for various events and the building of Zeuchgauz with a museum, conference rooms, administrative premises, a yacht club and, possibly, several hotel rooms are intended to be placed in the center of the island. There will be a pathway from the building to the pier. According to the concept, excursion boats and small vessels will run from it not only along the reservoir, but also to shipyards along River Voronezh - in Ramon, Chertovitsy, and Stupino.

Petrovsky Island will be connected with the embankment by a pontoon bridge. The alley, which will lead from the bridge, will separate the front Admiralty zone and the exposition-residential zone from the shipyard, where a pier for Goto Predestinatsia will be built. At the shipyard, they are planning to to recreate the technological processes of ships-building of the late ХVII - early ХVIII centuries.

The coastal part of Voronezh, where the Admiralty used to be located, is one of the most significant monuments of the city. In 1696-1709, the first Russian navy was built at the Voronezh Shipyard under the leadership of Peter the Great.

The creation of the Petrovsky Island theme park in the area of former shipyards of the late XVII - early XVIII centuries was included in the federal plan for the preparation and conduct of the 350th anniversary of the birth of Peter I. Dmitry Medvedev approved the plan for events until 2022 in mid-May of 2019.

As noted during the meeting, the island’s land will be included in the cadastral records and undergo property registration by July 15. According to Aide to the Governor for Architecture Konstantin Kuznetsov, the cable car route is being worked out.

Head of the Region Alexander Gusev called the concept beautiful and noted that it was necessary to make an implementable decision, because finding federal funding is difficult, and we have to rely only on ourselves. The Governor ordered to finalize the draft project, update it, and present the final version in a month or two.

– We must make a space not for tourists but primarily for citizens. The funding can be provided by the business community, – the Governor stressed.

The concept made Alexander Gusev doubt in the first place because of the capital structures that were proposed to be erected: a large number of them could affect the implementation deadlines.

– It is preferable to finish the implementation by 2022, but it may not even be possible in this format. It is clear that 10 years ago, when the project was created, it was intended for the long term, with no limitations in terms of ideas. We need a more realistic version, and I think that it will also be very beautiful and interesting. This place must be filled with life for people to come here, – the Head of the Region noted.

So far, the projects are not intended to be funded from the federal budget.

– I believe that there must definitely be a commercial basis. In a month and a half, it’s realistic to have not just a picture, but both calculations of how much it will approximately cost and a more realistic picture — the one we will get. I hope we will begin the implementation next year. We will not be stingy. The place is a landmark, and it cannot be ruined by some decisions. We need to look 50 years ahead in the future, – the Head of the Region stressed.

The Head of the Region noted that it was necessary to complete the work before October 2019 in order to plan the budget for 2020.

The idea of creating a historical and cultural theme park near Admiralteyskaya Square with the reconstruction of the Voronezh Shipyard first arose back in 2008. The concept of the Petrovsky Island park was reviewed in 2010. Several concepts have been created for the development of Petrovskaya Embankment and the island.

In March 2019, it became known that comprehensive urban planning research of Petrovskaya Embankment will be conducted by the Giprogor Russian Institute of Urban and Investment Development. The cost of work amounted to 3.9 million rubles. While speaking at the VRN Architecture Forum, Alexander Kolesnikov, the Chief Architect of PJSC Giprogor, noted: after examining the territory, experts pointed out that Petrovskaya Embankment was at the center of a major urban problem — the polluted reservoir. Konstantin Kuznetsov stressed that there was already a task team organized, elaborating the cleanup of the waterway and the creation of engineering, so the concept would not turn out to be just another “air castle”.

The development of the territory of Petrovskaya Embankment will be carried out in two stages. The first stage – a comprehensive historical, cultural, socio-cultural, spatial and economic analysis – will help identify the urban planning and recreational potential of the territory. The second implies organizing and conducting an architectural and city-planning competition to develop a concept for the development of the embankment.