New evidence of war. How Voronezh Arsenal Museum has changed after reconstruction 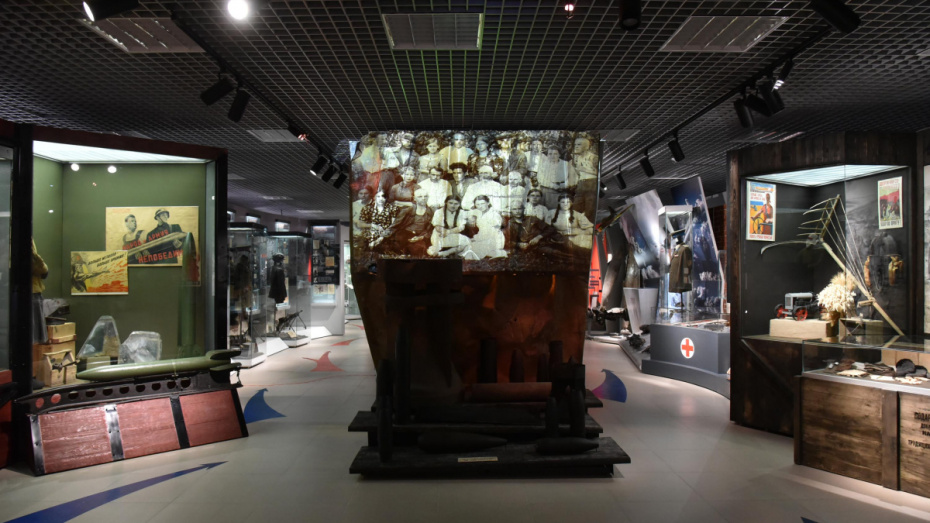 What can be seen in the updated rooms.

The reconstruction work in the 1941-1945 Great Patriotic War Department (Arsenal) of the Voronezh Regional Museum of Local Lore has officially been completed after two years. RIA Voronezh journalists went on a tour to the museum, which is yet closed to visitors, and learned how its halls look now and what new exhibits can be seen there.

During the restoration, the museum building itself, an architectural monument of the late XVIII century, was renovated. Its roof, heating, ventilation, and electricity systems have been replaced, an automatic fire extinguishing system has been mounted. Visitors will also notice the redecoration inside - new doors and wall decor. In the basement, the whitewash of the vaulted ceilings has been updated and the walls have been laid with clinker bricks. 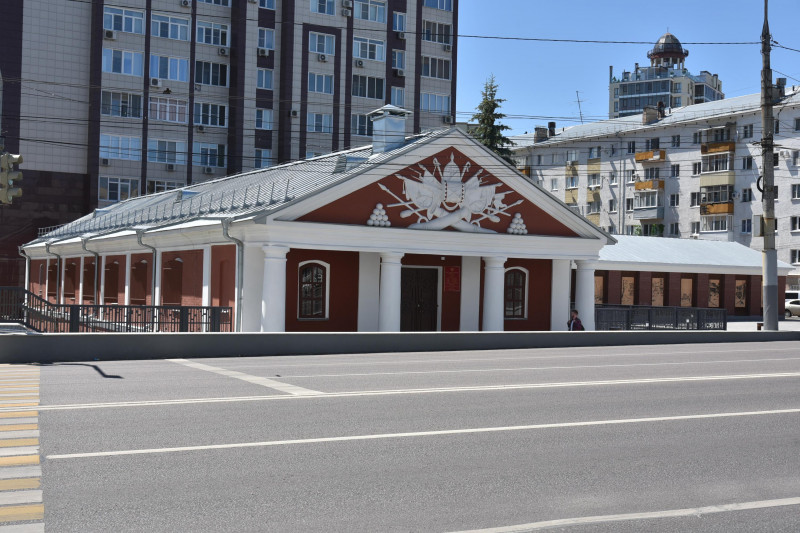 But the most interesting changes have occurred in the exposition of the museum. The RIA Voronezh correspondent was told about them by the head of the museum department Alexei Derevyanko.

The museum staff started developing the new scientific concept back in 2018, immediately after the building was closed for repairs. The main theme of the exposition is “Voronezh Region during the Great Patriotic War”. The museum space was divided into three zones. The first acquaints visitors with the initial period of the war when hostilities had not yet reached our region. At the entrance, spectators can see an image of the Voronezh-1 Train Station and figures of people saying goodbye. One of the showcases visually imitates a train car with a soldier leaving for the frontlines. 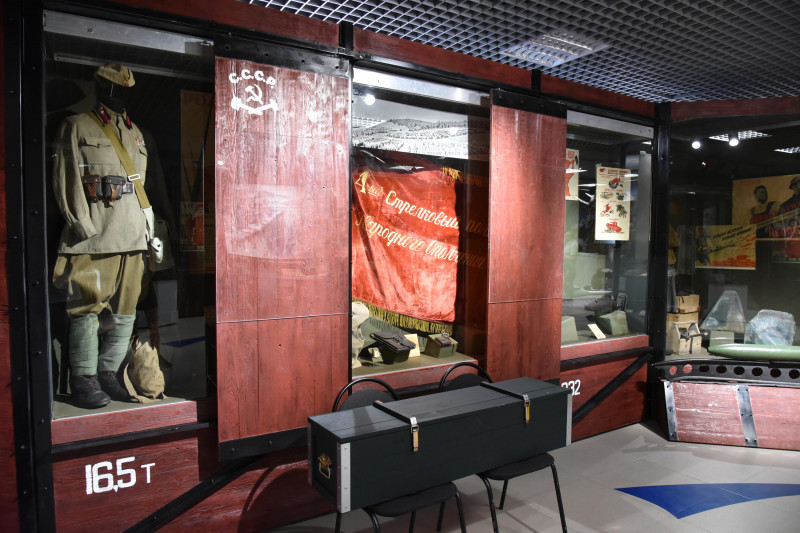 Here you can also see the famous poster Motherland is Calling!. Other exhibits in this zone introduce the work of the Voronezh industry in the first war years. The whole showcase is dedicated to the aviation and Komintern plants, it shows a shell from the Katyusha and part of the glass of an IL-2 plane shot down by the Germans. Another showcase is decorated in the form of a wooden parcel, such as those sent to Voronezh soldiers. Under the glass are postcards and gifts the townspeople sent to the front. An important element of the first zone is a showcase depicting a bombed room. 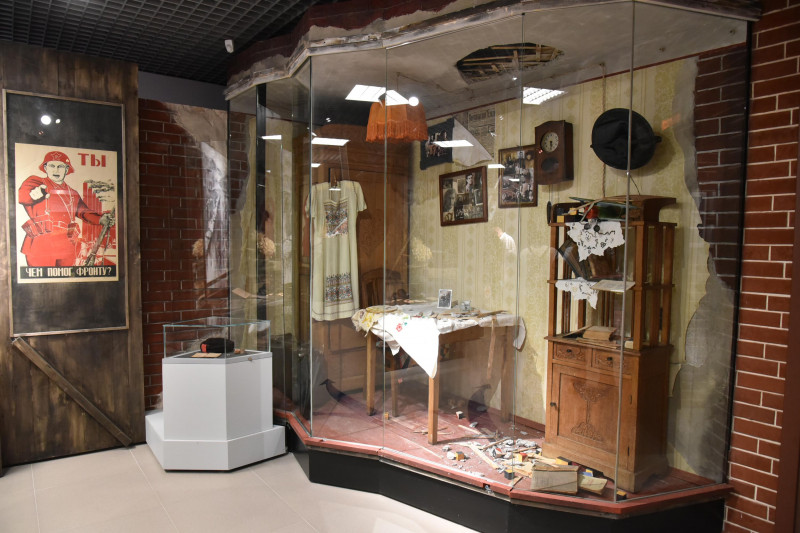 ‘There was no such thing in our museum before. This installation illustrates the events of June 1942, when Voronezh was raided by Nazi aircraft. The interior of the room reproduces the life during the wartime,’ Alexei Derevyanko reported.

One of three new projectors hangs in the same zone. In each zone of the museum, projectors show special videos telling about a particular time period of the war.

The video in the first zone tells about the declaration of war, Germany’s plans to capture the Soviet Union, and the formation of the militia in the Voronezh Region. 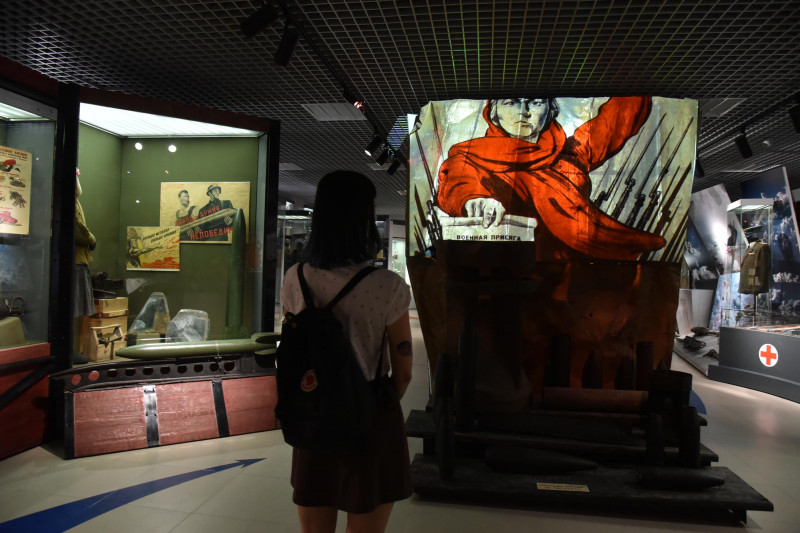 Signs on the floor designed in the style of navigational elements of military maps help to get into the next zone.

They announced that the city was bombed

The second zone is dedicated to the events of the Battle for Voronezh, which lasted from June 28, 1942, to February 2, 1943. The decoration designs contain photographs of Soviet heroes, their documents, letters, and notes. In the showcases, you can see the uniforms of Soviet and German soldiers. Here also are samples of the weapons of the Soviet troops many of which are exhibited for the first time: from the Mosin rifle to the Shpagin submachine gun. 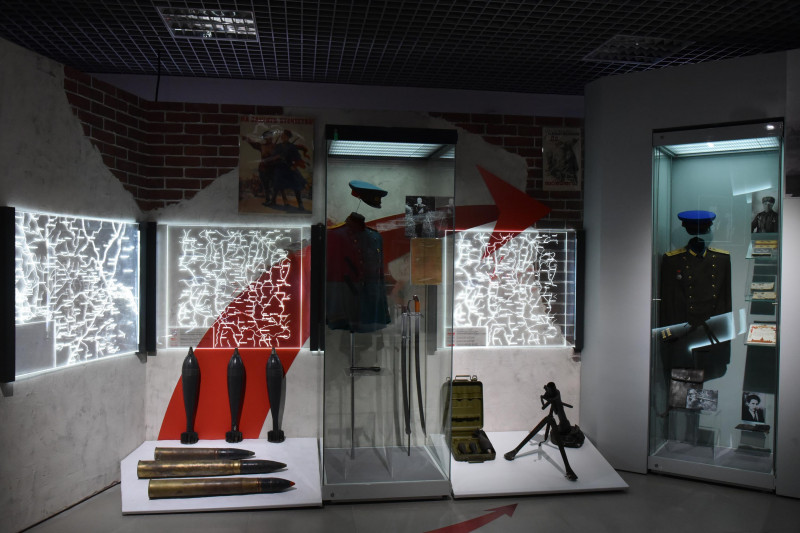 A separate showcase is dedicated to doctors - it contains medical instruments from the war years. These items have not been exhibited earlier. One of the rare exhibits is 1941 iodine. Thanks to the glass packaging, it is well preserved.

Many of these items were handed over to the museum by Valery Radushkevich, a famous Voronezh surgeon who had gone through the war and subsequently became a professor at the Voronezh Medical Institute and later its rector and the chief doctor of the Regional Clinical Hospital. 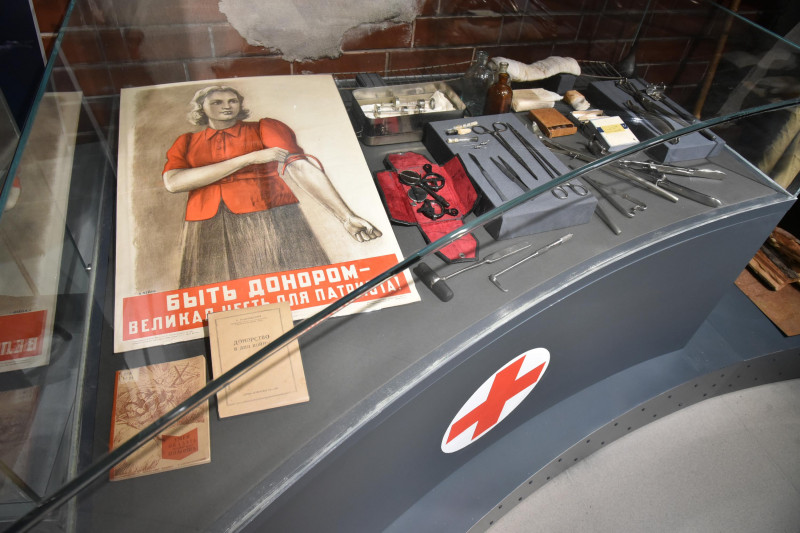 In the center of the hall is the installation of a soldier’s feat. It is dedicated to Nikolai Zagorsky, who repelled German attacks during the battle on the territory of Nizhnedevitsky District as the only survivor from his detachment. During the fighting, the 19-year-old officer died but the minutes he won helped the Soviet troops retreat to Voronezh, which ultimately saved hundreds of lives. The central element of the installation is the mannequin of the gunner specifically made for the Voronezh Museum in St. Petersburg workshop. Visitors cannot touch it, but it feels real to the touch - all materials imitate human skin and muscles. On the shirt and face of the soldier is an imitation of blood. 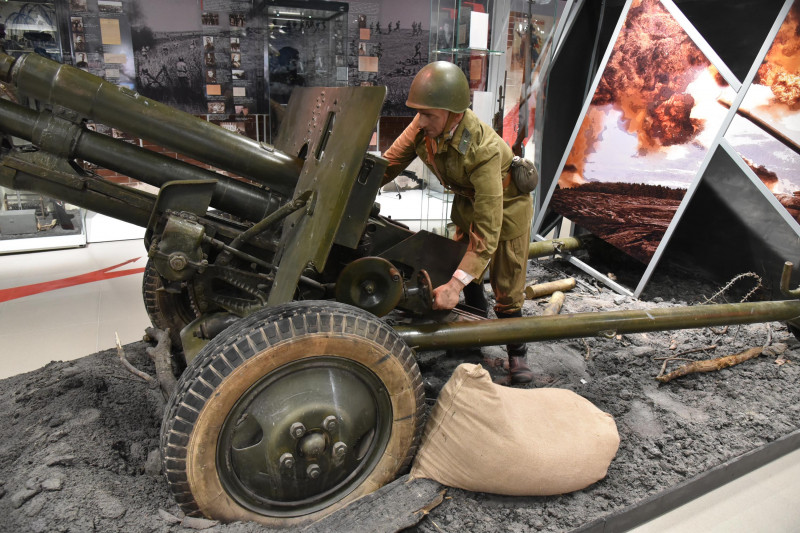 The projector in the second zone will show a video about how the fighting went in the Voronezh Region, how the front line was changing.

"The city fought for every block"

The last exhibition area is dedicated to the period of the Voronezh occupation. In the near future, it will be supplemented by photographs and other documents that will tell about the brutality of the Nazi invaders. Among other things, it will be possible to see declassified materials from the archives of the FSB office of the Voronezh Region - German announcements, identity cards, travel lists, and other documents reflecting the pro-Nazi policies in the occupied territory.

Various attributes of Nazi power are collected in a separate showcase: a German golden eagle that had been used to decorate all the administrative buildings, a Hungarian helmet and a carbine, a token of an Italian soldier and Italian musical instruments. All these items came to the museum workers as trophies. 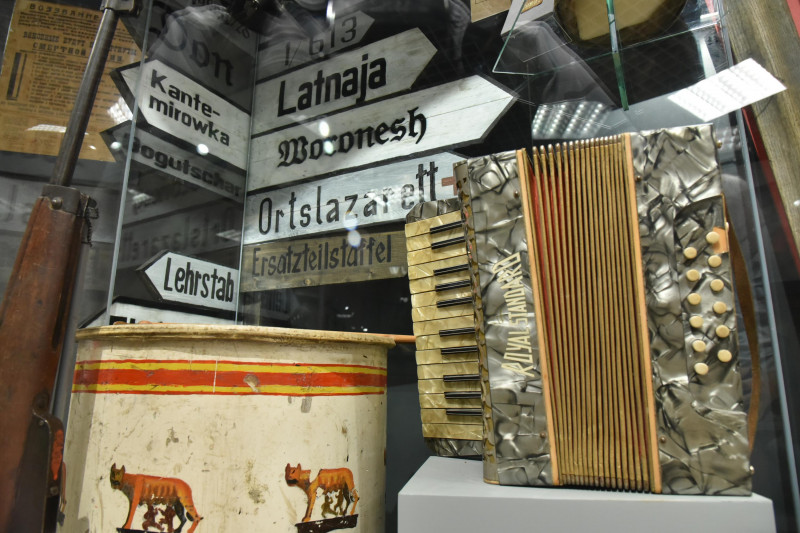 A map shows the history of the region’s liberation: from the Kantemirovka Operation in the south to the Voronezh-Kastornensk Operation in the north-west during which the entire region was cleared of Germans by February 2, 1943.

In the center of this hall is a model showing an image of the central part of Voronezh in the spring of 1943, from Lenin Square to the Koltsov Drama Theatre./p> 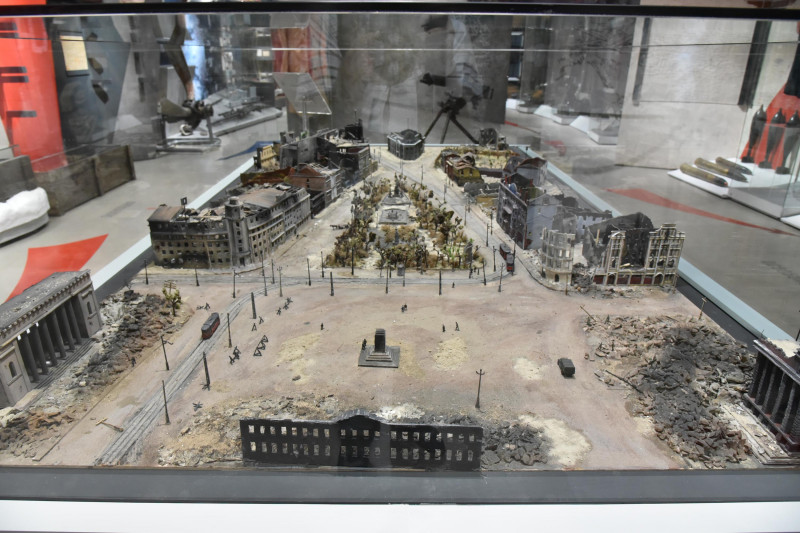 The model was recreated from an archival photograph and clearly demonstrates that the city was in ruins. This model is a legacy of the previous museum exposition, but during the repair, it was restored, cleaned and supplemented with new elements.

In the third zone, there will be a film about the occupation and actions of the partisans in that period. 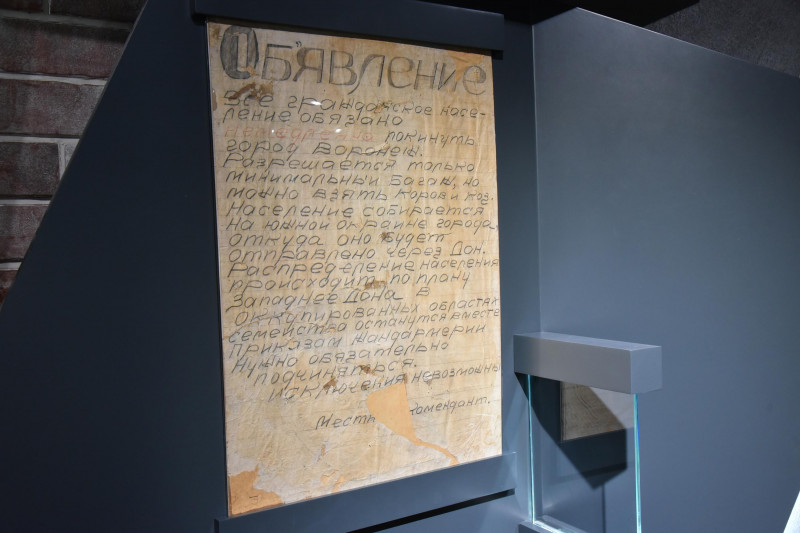 The exposition ends up being looped with an image of the bombed-out building of the railway station. This is a clear demonstration of the destruction brought to the city by war. But here also is a stand for posters that will be pasted over with photographs of the period of the city’s rebuilding.

“Here we plan to show how life was restored in the city, how the streets were cleared and new houses were built, as well as the famous picture with the banner Let’s Restore You, Dear Voronezh!,’ said Alexei Derevyanko.

The end of the exhibition tells about the path of the Voronezh Front from Voronezh to Berlin. The final point of the exhibition is an imitation of the Reichstag column with another mannequin next to it - the “Victory Soldier”. The shape of the two mannequins corresponds to the realities of the time: while the gunner is dressed in the 1943 uniform, the victorious soldier wears a later version uniform. 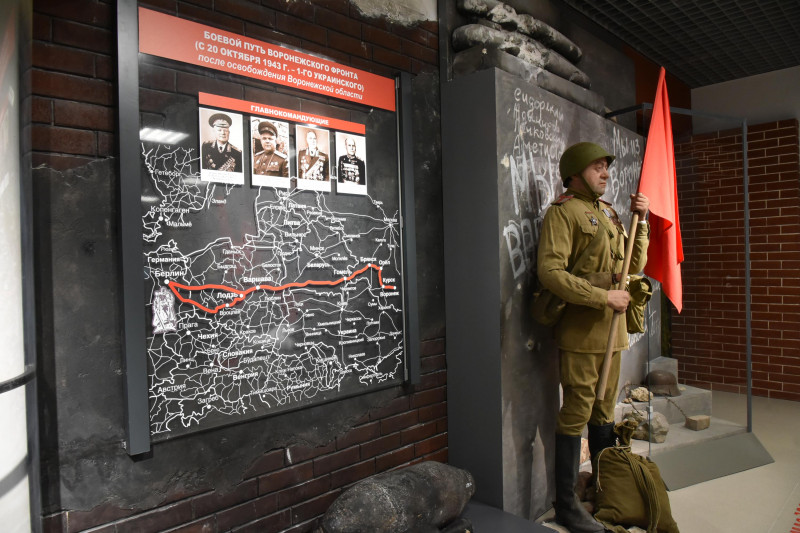 The museum now has an additional room - an interactive program room. This is where the museum classes for schoolchildren will be held. The seats in the room are stylized as shell boxes, and there is an almost life-size installation named Dugout next to the stage. 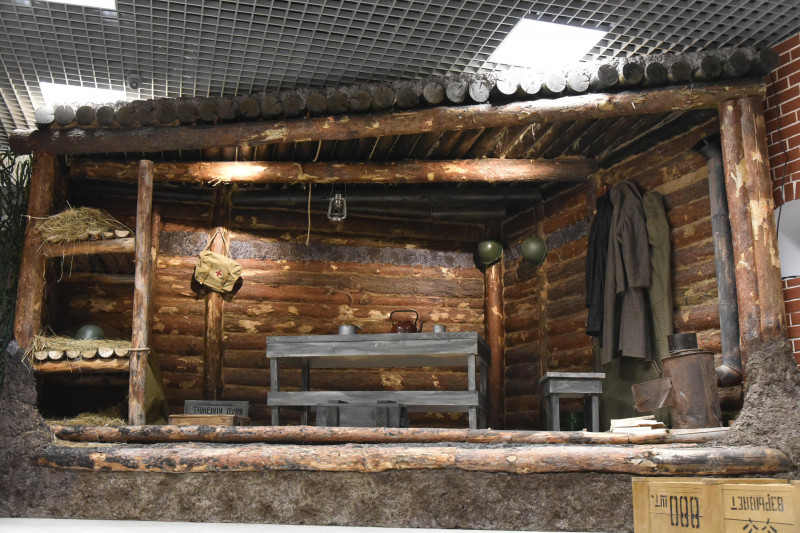 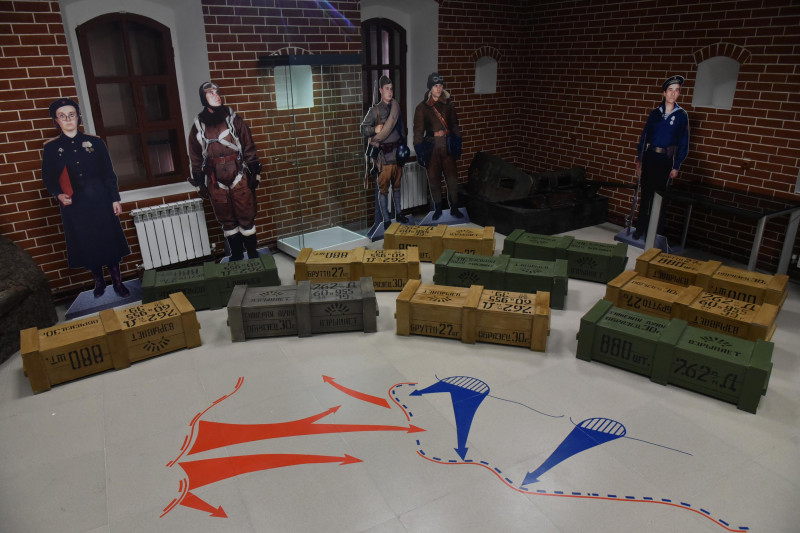 The ground floor no longer includes a continuation of the main exhibition but a separate exhibition hall. Now it hosts the exhibition On the Path to Victory: from Voronezh to Berlin (1943–1945). The memory of the Great War. 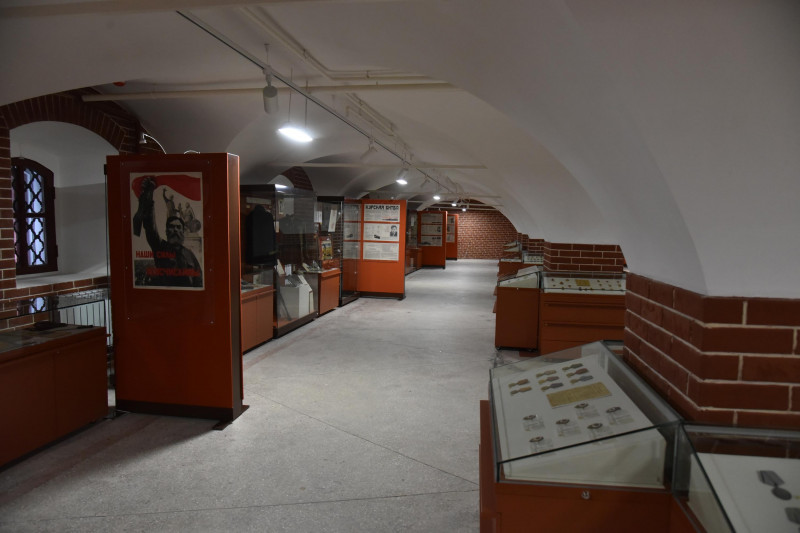 ‘The exhibition tells about the path of Soviet troops from Stalingrad to Berlin and above all about the Voronezh people who had gone through it. It includes 800 exhibits from the museum funds - this is the largest exhibition about the war in the territory of the Central Black Earth Belt. This exposition for the first time presents documents on the activities of the NKVD soldiers on the territory of the Voronezh Region in 1941-1943. The documents were declassified by the FSB of Russia in the Voronezh Region at the request of the museum. A separate block is dedicated to the Soviet-Japanese war and the end of World War II and its results,’ said Roman Berestnev, head of the museum’s development department. 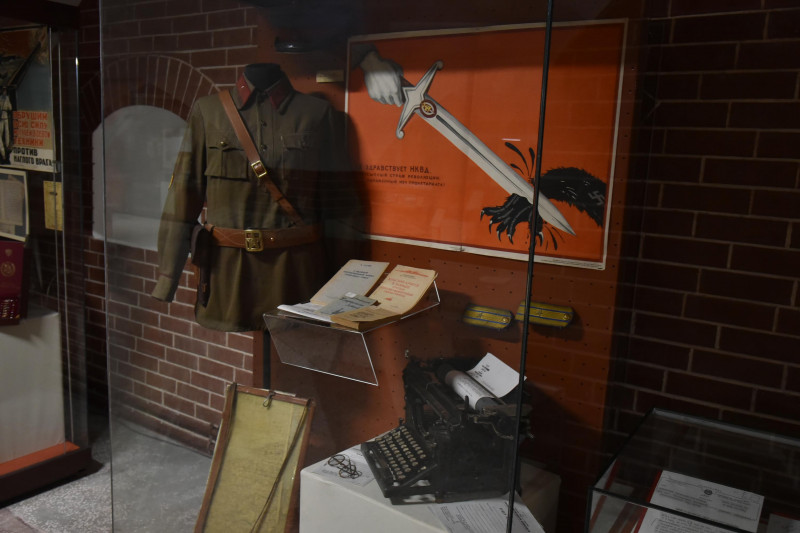 The exhibition will operate at least until mid-2021. Temporary exhibitions from museum’s funds, as well as from other regional and federal museums, can later be held on the ground floor of Arsenal.

When the updated Arsenal Museum will open to visitors is yet unknown. This will depend on the epidemiological situation in the region and the limitations associated with the pandemic. The museum workers hope that the opening will happen in the fall of 2020.