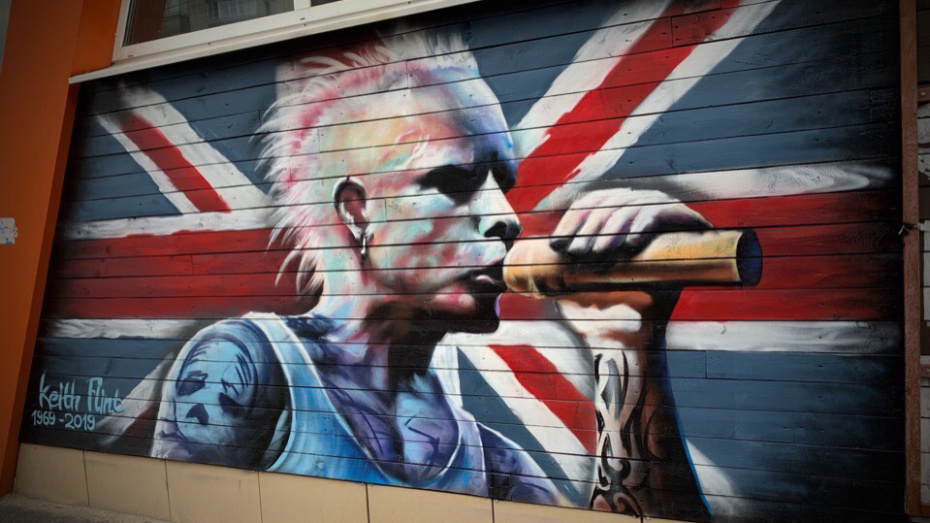 The portrait of the British artist is located in Sovetsky District.

A graffiti depicting the deceased member of British band The Prodigy Keith Flint appeared in Sovetsky District of Voronezh on Wednesday, May 22. The 2.5x4 m drawing decorated the wall of a club at 1A, Komarova Street. The author of the art street is a well-known Voronezh graffiti artist under the pseudonym Denis Gramm.

– I wanted to paint Keith Flint a long time ago, about four years back. I had this idea – to make a series of portraits of famous Western musicians, including Chester Bennington from Linkin Park and Keith Flint from The Prodigy – I just really like these bands. At that time, Chester and Keith were still alive, and I was in no hurry – I thought I still had time to draw them. And after both were gone, many of my subscribers began to ask if I wanted to immortalize the memory of Keith and Chester in graffiti. Then I made an announcement in social networks about finding a suitable site for their portraits and a sponsor ready to pay for the paint. I obliged to do the work for free, – Denis Gramm told the RIA Voronezh correspondent.

Director of a rock club Victoria Timoshkina responded to the announcement. According to the girl, she had long wanted to decorate the wall of the building where the club was located with graffiti of some famous western musician. She liked the image of Keith Flint very much.

The work on graffiti took Denis Gramm two days. On the first day, he marked out the outline, on the second he painted the portrait with paint in five hours. All it took was about ten cans with 16 shades of paint.

During the work, the artist did not use a projector to accurately transfer the image to the wall, he painted by eye. Denis admitted that he wanted to make a creative portrait and not an exact copy of a photo from the Internet. By the way, the artist almost made a mistake in the process of painting. The photo from which Denis Gramm copied the portrait of Keith Flint turned out to be “mirrored”, which is why the tattoos of the British musician “moved” from one hand to another. And Denis almost drew a girl's face on his right shoulder instead of a skull with bones. But something made the young man double-check the order of the musician's tattoos. That’s when he found out that the original image had been altered in Photoshop.

The picturesque Keith Flint graffiti on the building can be seen not only during the day. At night, the image will be illuminated by the club lights.

The vocalist and dancer of British electronic band The Prodigy Keith Flint died at the age of 49 on March 4, 2019. In 2017, The Prodigy gave a concert in Voronezh and filmed the local sights - the monuments of the Kitten from Lizyukovs Street, Peter the Great, Vladimir Vysotsky and Mikhail Gorshenev - for their video for the song Mindfields.