From bear to desman. What Khopyorsky Reserve in Voronezh Region can surprise its guests with 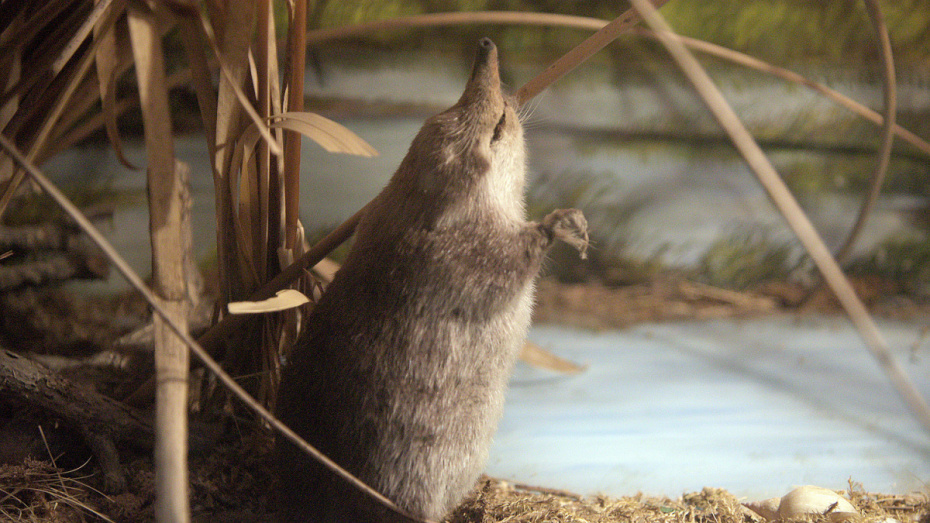 In 2020, the Khopyorsky Reserve celebrates the 85th anniversary of its foundation. Due to the pandemic and quarantine, the planned celebratory events were postponed until next year, and the tourist season did not open until July 1. RIA Voronezh correspondents visited the reserve to learn about its yesterday, today, and tomorrow. 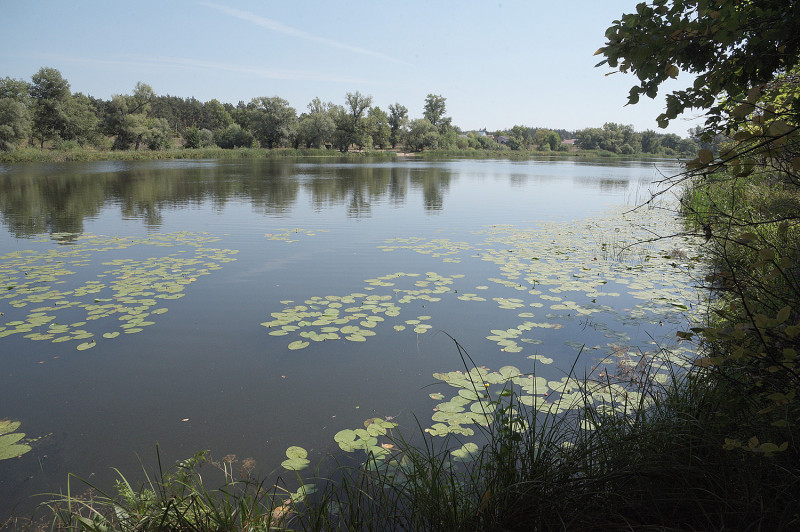 Director of the Federal State Budgetary Institution "Khopyorsky State Reserve" Alexander Golovkov announced the plans for the development of the specially protected area:

‘We will continue to develop ecotourism. In 2021, we are planning to build a small eco-park right in front of our central estate and open another small five-kilometer bike trail. We have more than ten bicycles tourists can rent specifically for such trips. Presently we have three eco-trails and we’re already working on equipping a new one - we are making a circular "Khokhulina Trail" specifically for a detailed acquaintance of guests with our brand – the Russian desman.' 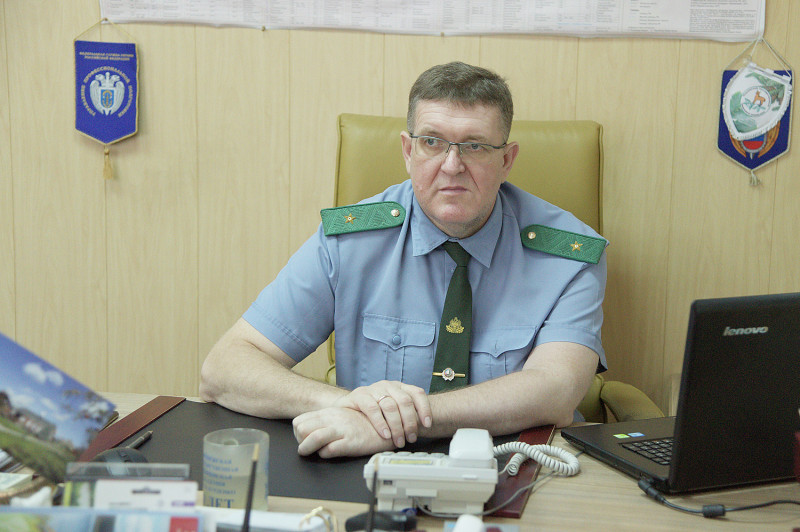 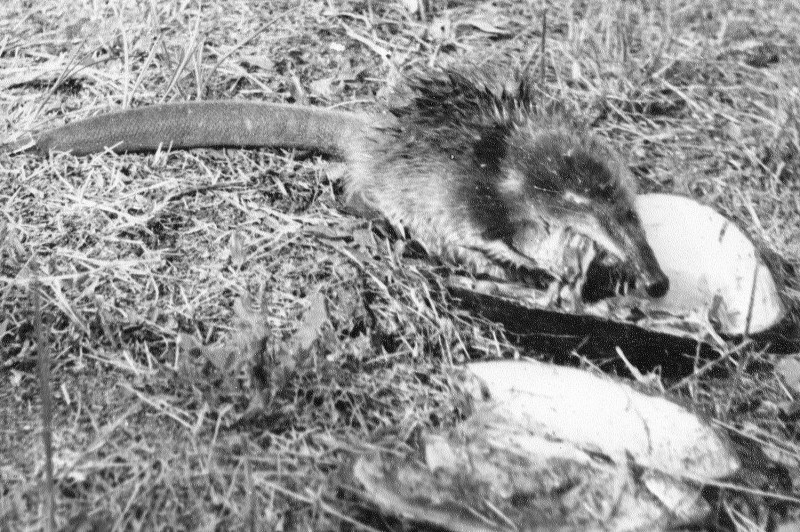 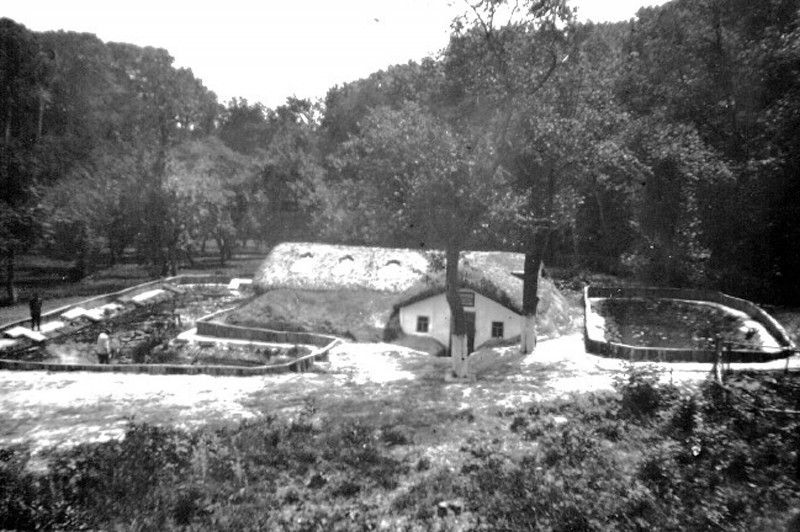 RIA Voronezh journalists became the first guests of the Khokhulina Trail. The tour for them was conducted by the deputy director of the reserve for environmental education and tourism Yekaterina Kitaeva. 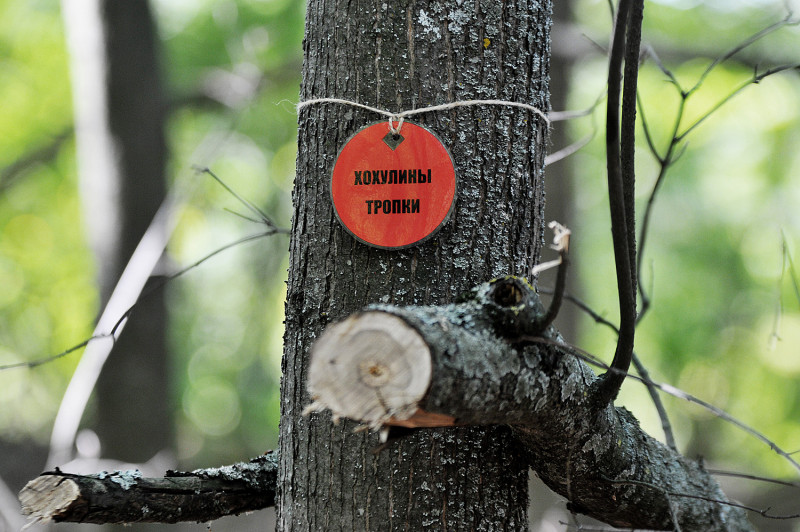 The trail winds for 4 km along the isthmus between the shore of Lake Goloe and Khopyor, which flows 300–400 m away from it. A rare animal, the Russian desman, lives in these places. The route passes through all of its habitats. 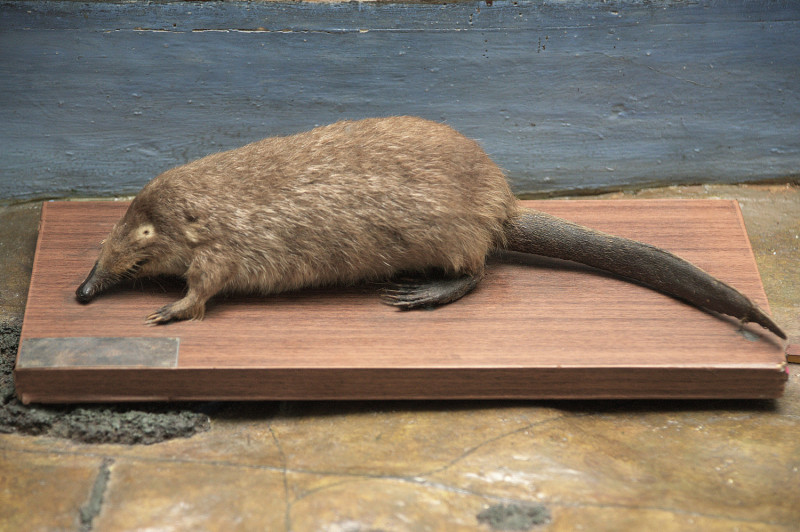 ‘The name “vykhukhol” (Russian for desman – RIA Voronezh) comes from the Russian word "khokhulya" which, in turn, comes from the verb "kukhat" - "stink". In case of danger, a desman uses a special strong-smelling musky liquid to drive away the enemy, which is why predators do not mess with it. Our employees walk along the Goloe Lake and other bodies of water along the coast on the first transparent ice in order to see this animal through the ice. There are 15 stops planned on the Khokhulina Trail where we will place sign plates, benches, and hang posters with information about the animal. We have already cleared the path from deadwood and windbreak,’ Yekaterina Kitaeva told. 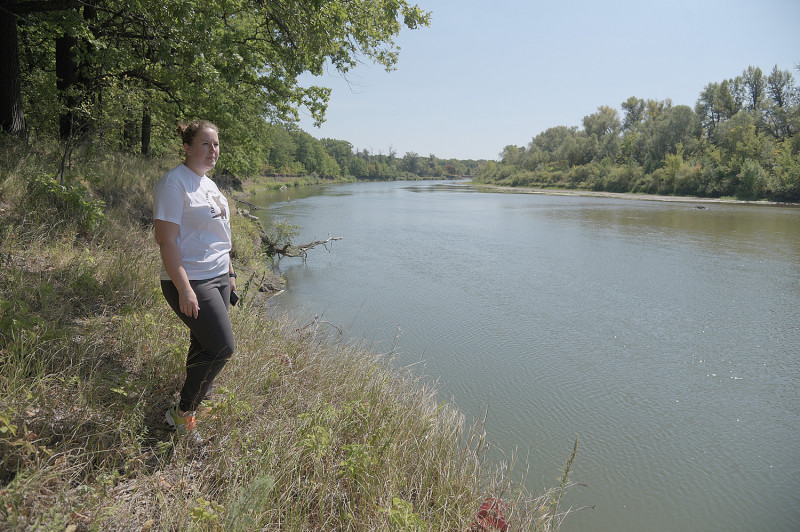 Preserving the population of the Russian desman is what the reserve was created for in 1935.

‘Presently there are about 170-190 animals. In the 1950s, we created a desman nursery which lasted for 20 years - until scientists realized that the animal did not mate in captivity. The females became pregnant, but at certain stages, the babies were simply "dispersed". Only once were full-term babies born, but they were so weak that they had lived only for a few hours,’ said Galina Mernenko, a tour guide at the local museum. 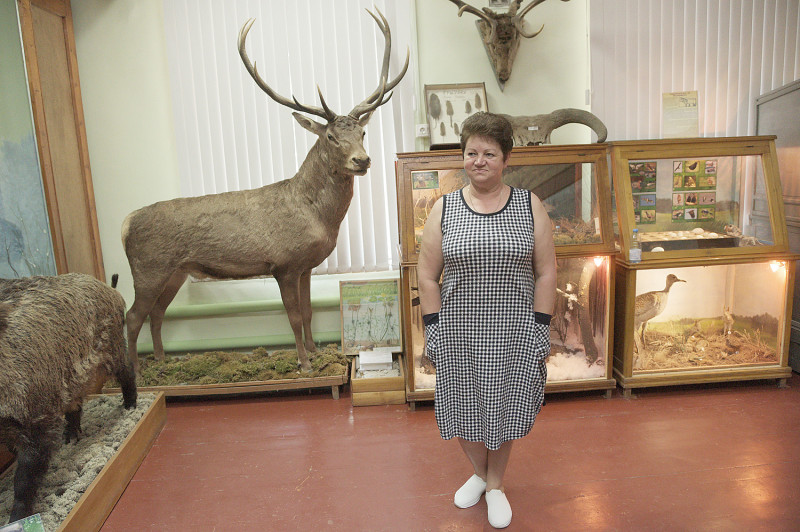 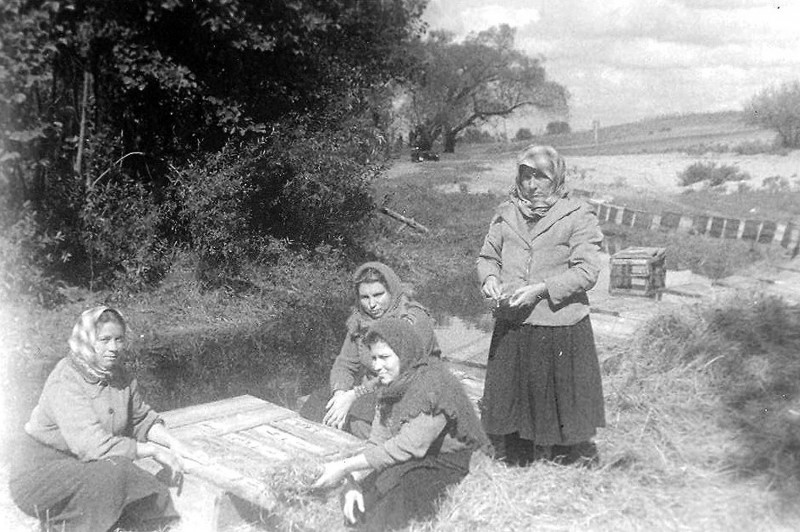 There are other rare and even Red Book inhabitants in the reserve. The stuffed versions of some of them, thanks to the efforts of taxidermists, became exhibits of the museum founded in 1937. It is located in the central estate of the reserve, in the village of Varvarino.

The largest exhibit is a stuffed European bison. These animals lived in the reserve for about 20 years. 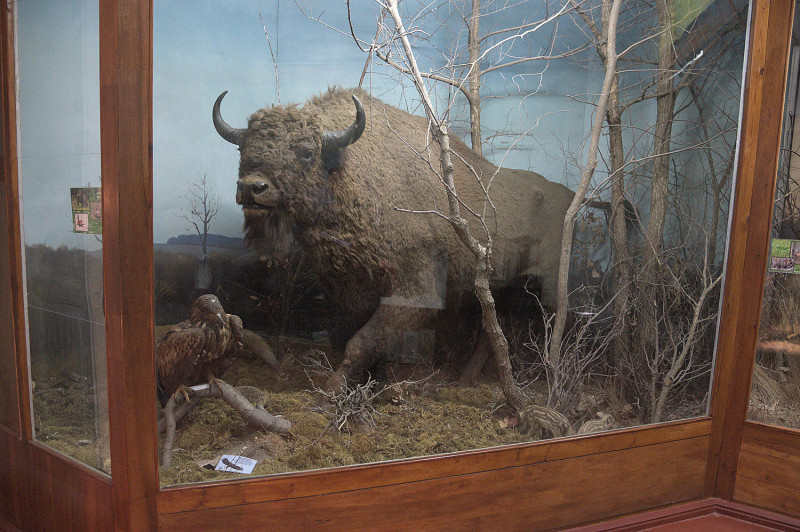 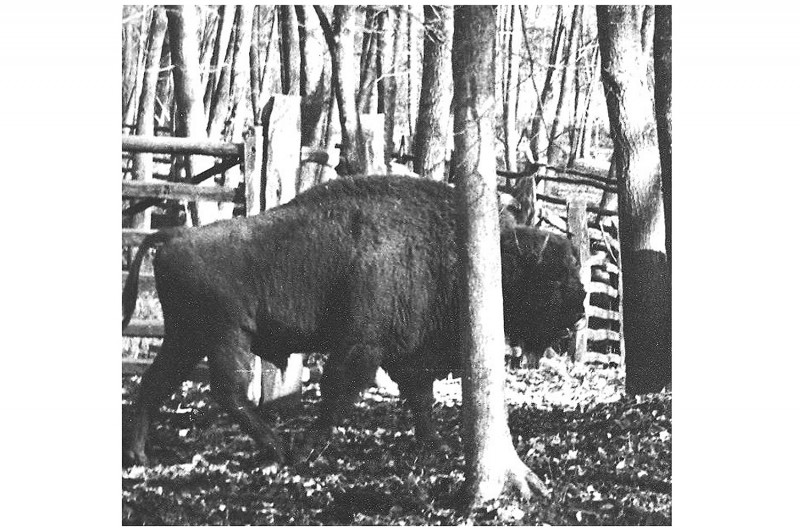 ‘They were brought to us in the 60s of the last century from the Prioksky Reserve and Belovezhskaya Pushcha - about ten animals. But we have a small territory for these hulks, and although the animals were kept in an open-air cage, they could not stay in the pens for a long time. And so these 700-900-kilogram giants went into the villages located along the borders of the reserve, to fields and yards, scaring people. In the 1980s, it was decided to take them away from here. And this stuffed one was made from an animal that went out into the field, ate corn and died of indigestion,’ explained Galina Mernenko. 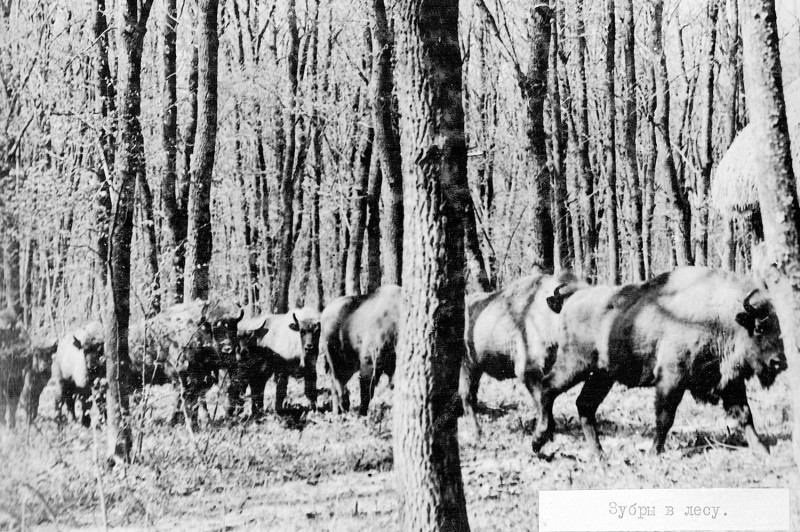 Another exhibit of the museum is the Red Book white-tailed eagle with a wingspan of 2.2 m. It was found in 2016 under a power transmission tower in a bad condition - apparently, it hit the wires on the fly. Veterinarians nursed him for several days, but the bird died. 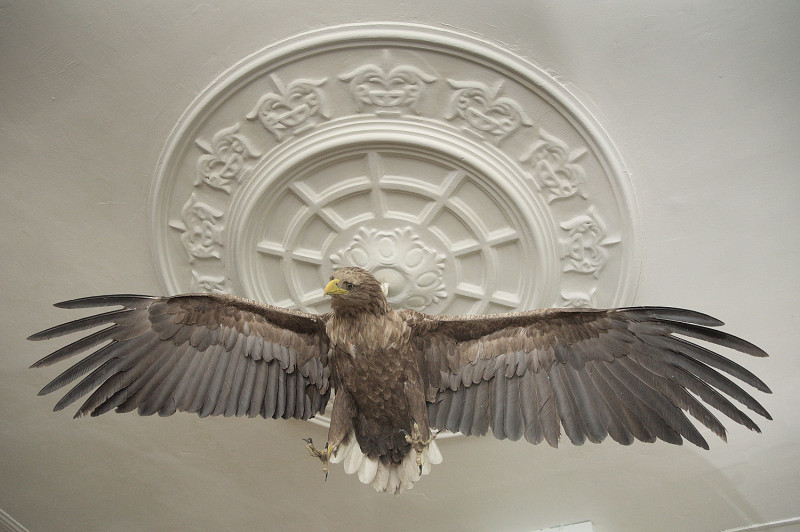 In the next showcase is a stuffed raccoon dog. Before the war, in the village of Ulyanovka, Borisoglebsky District, not far from the border of the reserve, there was a fur farm where raccoon dogs were bred. During the war years, there were problems with food, the animals were simply released into the wild, so the raccoon dogs went wild and fled around the country. They also came to the reserve.

‘According to some reports, there were even bears and lynxes in these places in the 17th – 18th centuries!’

In addition to stuffed animals, the museum also contains other exhibits with an unusual history. For example, a relief map of the reserve, 3x1.5 m in size, made of papier-mâché in 1963 by two of its employees - Konkov and Anokhin. In those years, there were no publicly available maps made on the basis of aerial photography, so the specialists made it from memory. 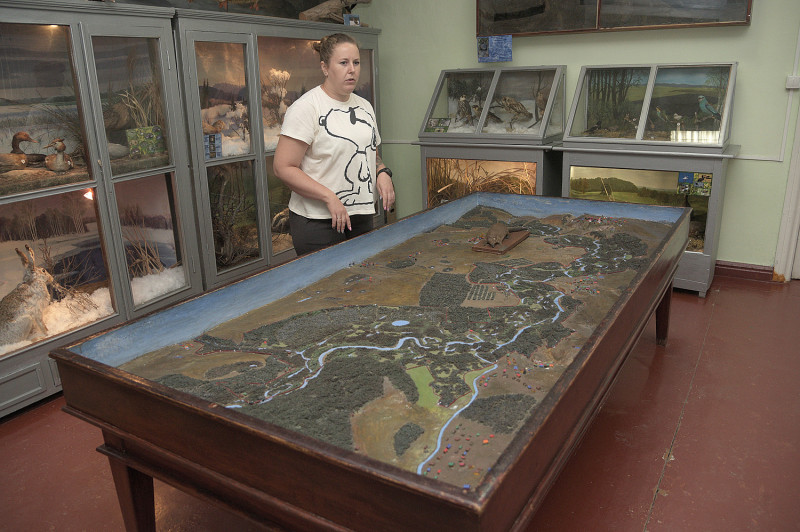 ‘It turned out so accurate that we are surprised to this day,’ Galina Mernenko told the RIA Voronezh correspondents. ‘It has an ideal scale and topography. Several years ago we specifically checked it against a modern aerial photography map – they are one and the same!’ 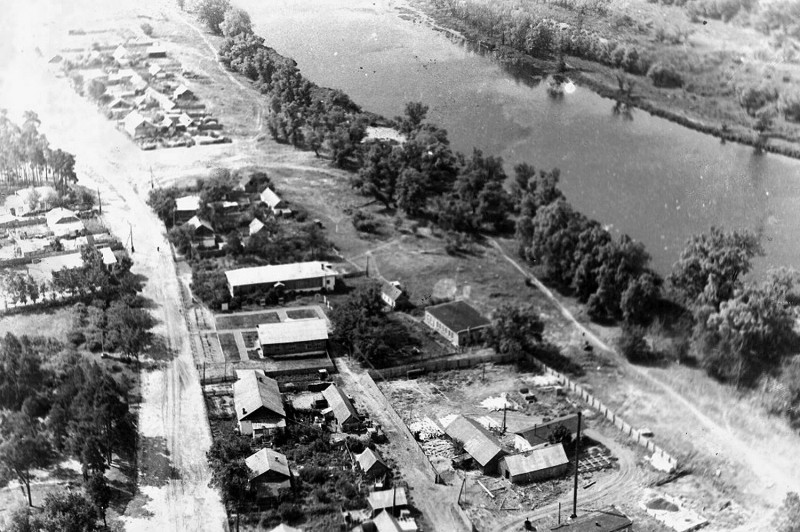 Dogs, robbers, and an angry boar

Having walked along the future eco-trail along the Khopyor River, the journalists climbed a three-meter log over the shallow channel connecting Lake Goloe with the river and met with Alexander Mamai, the senior state inspector of the reserve in the field of environmental protection and ecology. Together with him, they sailed 5 km up the Khopyor in a motorboat and then returned to the pier located near the Kutikha cordon.

‘Khopyor is growing shallow. About 20 years ago, the depth of the most fishy - Grishkina - pit was 16-17 m and now there are six meters left,’ said Alexander Mamai. 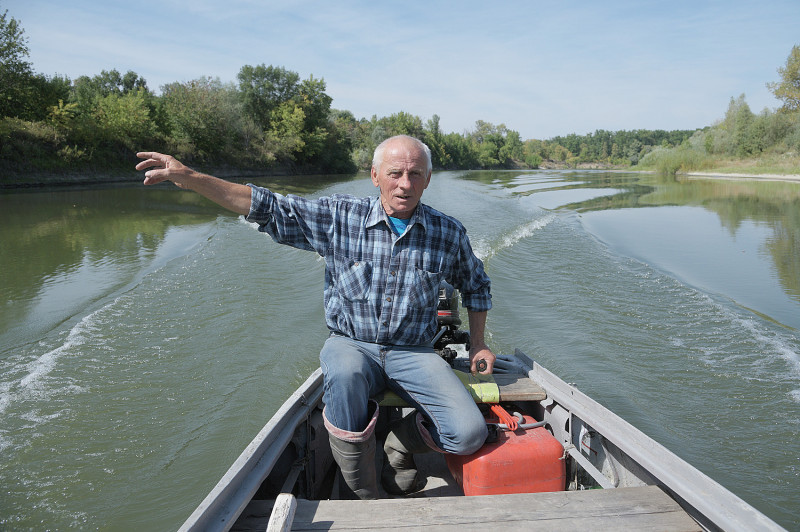 On the way, they came across a white-tailed eagle hovering over the water. According to Mamai, these birds collect river shells and "batter them to get the mollusk".

The RIA Voronezh correspondents did not notice any traces of poachers on the territory.

‘The staff of the reserve has 18 rounds, each covers an area of about 1-1.5 thousand hectares. And our two task force groups work throughout the entire reserve. A group reaches its farthest point in an hour. We virtually do not use weapons - there are fewer poachers now since the law has been tightened. In addition, we have our own people in the villages located on the border of the reserve - Alfyorovka, Vasilyevka, Oktyabrsky, Ulyanovka, Ozyorny. If they see a stranger who has come to fish or hunt, they inform us immediately,’ said the senior state inspector of the reserve.

Alexander Mamai has worked here for about 40 years and has accumulated many stories from the life of the Khopyorsky Reserve. He shared the most vivid ones – and there were even criminal ones were among them.

‘Once in winter the guards met a man with a small-bore rifle with a telescopic sight on this territory. He saw our people, threw his rifle down, and ran away. They went after him, and he ran to the houses of the village of Vasilyevka. He entered the last one. Our people ran after him exactly in the tracks left in the snow and came to this house. My guys started knocking, the hostess came out - she wouldn’t let them in: ‘Get out of here, there’s no one here!’ They had to trick her - one of the inspectors lied to her that the fugitive had wounded his colleague and that she would go to trial as an accomplice in the crime. The woman got frightened and pointed to a room with her eyes. They started searching and it was only a minute later that they thought of looking under the bed - he was hiding there. He got out with his hands up, sneezing from the dust. They drew up an administrative offense report against him.’

‘In the mid-1980s, we received information suggesting that suspects in a series of robberies of rural shops in the neighboring Volgograd Region could sail along Khopyor through the territory of the reserve. And so it happened - there came a signal that some suspicious people were sailing along the river in a boat. We stopped them with a shot from a signal pistol - it bangs greatly on the water. And the boat was full of stolen goods from the shops - food, clothing, and even brand new shovels and brooms. The police arrived soon.’ 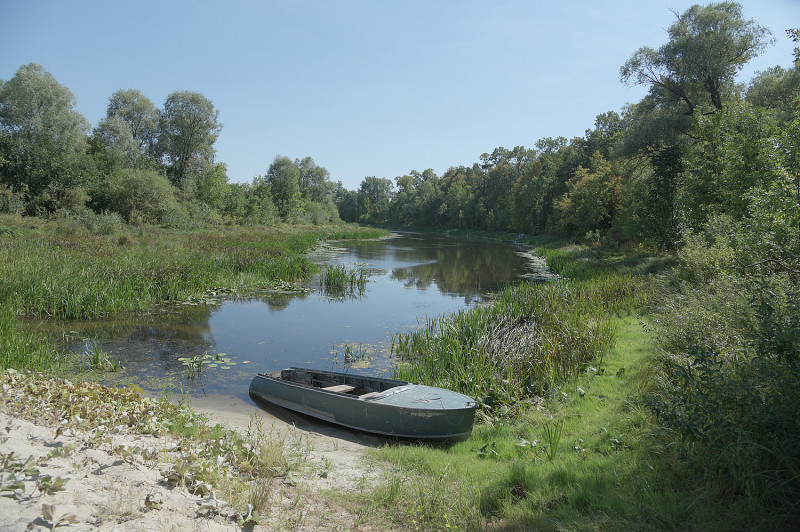 ‘There are a lot of wolves here now, but they don't attack people. There was only one case when animals attacked a person here. Boars appeared in our country in 1962, and it happened in those years. They used to put hay feeders for deer. A wild boar climbed into the hay, and our forester was moving the hay with a pitchfork and touched the animal. But everyone lived - the fishermen drove the animal away.’ 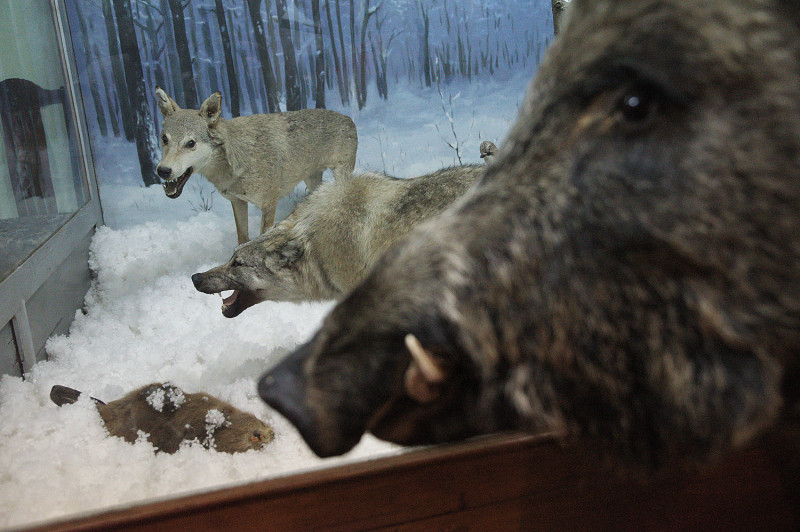 ‘About 25 years ago, deer had bred in incredible numbers in the reserve, and ordinary domestic dogs from the villages adjacent to our territory found entertainment for themselves - to drive deer out of the forest into rural yards and front gardens. Every now and then the owners called us and asked us to pick up either one deer or a couple chased by dogs to the house. There were also deer who were bitten by dogs, and we took the wounded animals, treated them and released them back into the reserve.’ 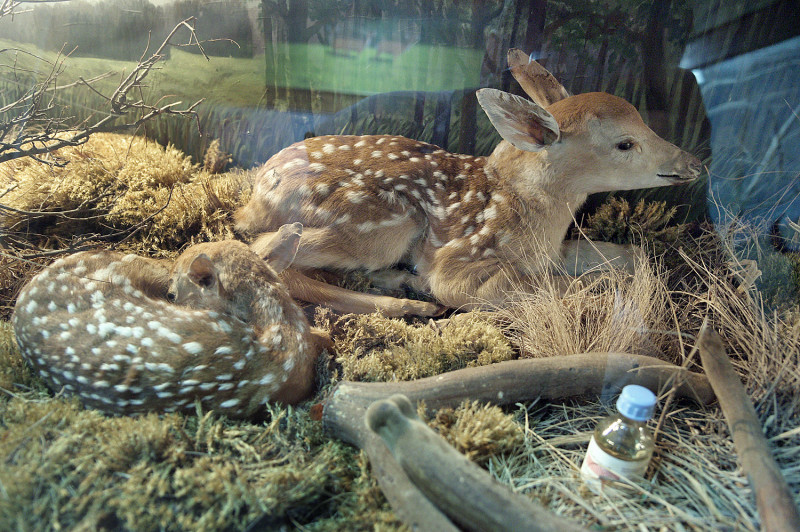 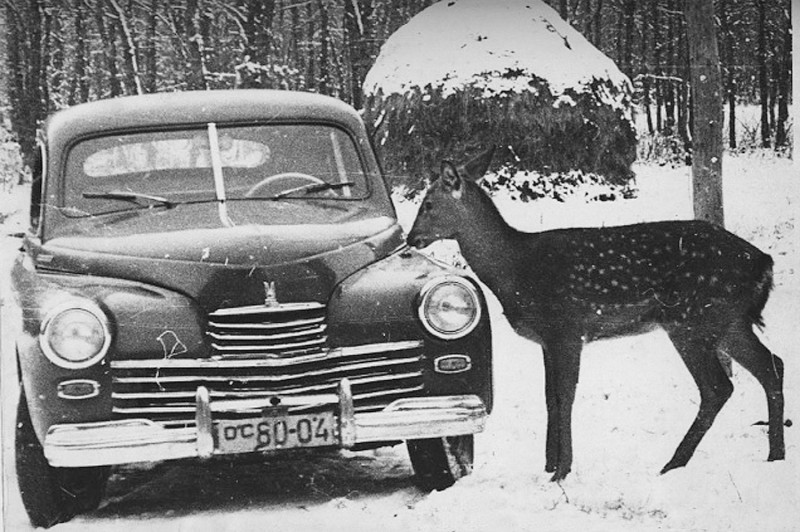 The Khopyorsky State Natural Reserve was established on February 10, 1935. Its total area is 16 thousand 178 hectares. The territory stretches for 50 km along the Khopyor River from north to south, the width of the protected land ranges from 1.5 to 9 km. About 80% of the area is covered with forests with prevailing floodplain, upland oak forests, small areas of steppes and meadows. During the flood season, about 80% of the territory becomes flooded, there are about 400 lakes and oxbows.

The reserve has a rich aquatic flora (109 plant species) and fauna. 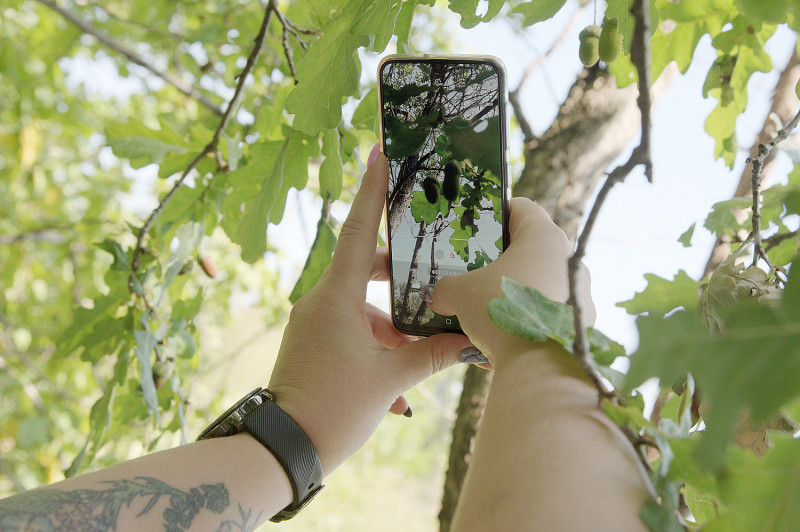 45 species of mammals are found here, among them – Russian desman, wild boar, wolf, fox, badger, pine marten, and sika deer. In addition, there are 184 species of birds, eight species of reptiles and amphibians, and 35 species of fish. 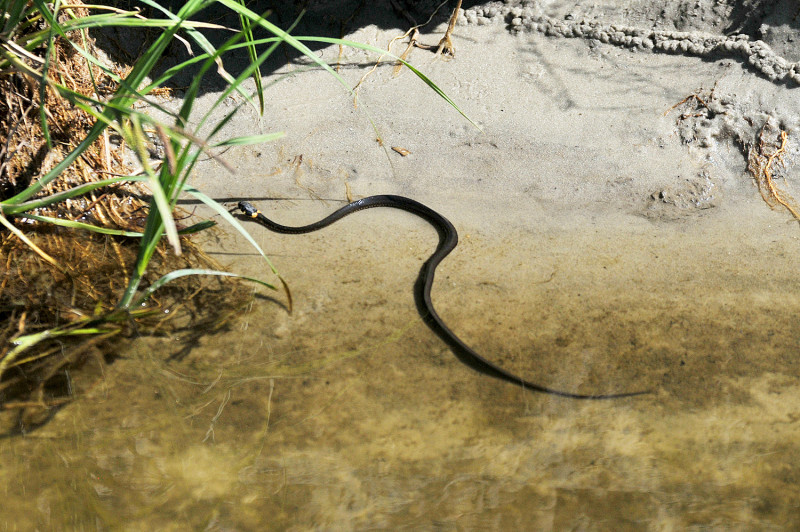 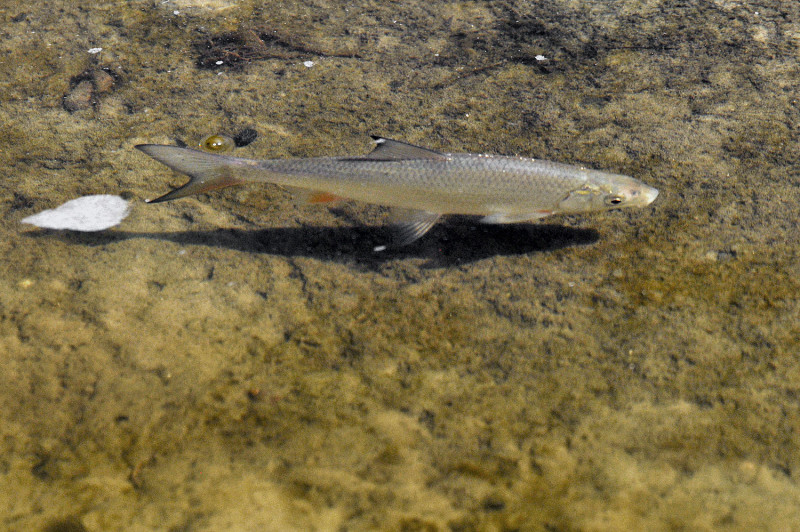