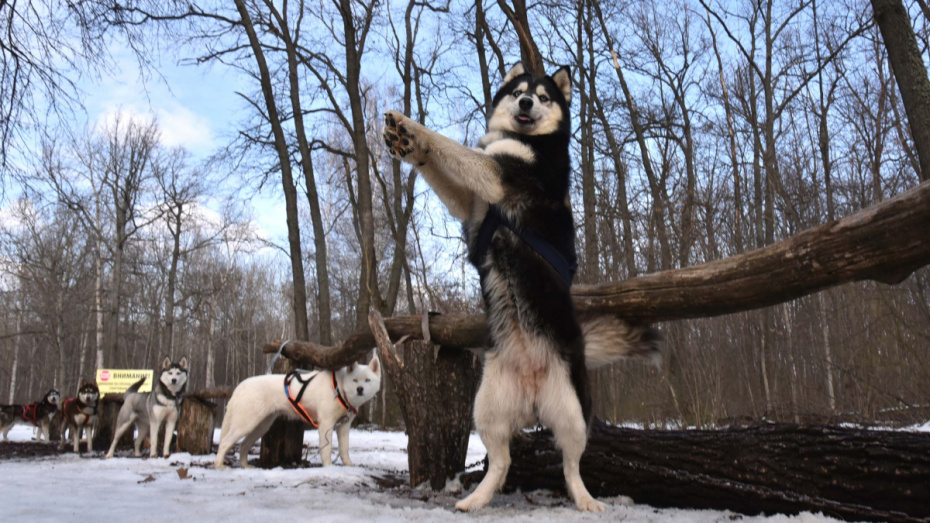 Why dog racing has not gained popularity yet.

In February 2020, the select team of the Voronezh Region took two prizes at the championship of Russia. Now the Voronezh Region representatives of the Russian Dog Sled Sports Federation will take part in the spring stage of the World Cup. To find out how the sled dog racing has appeared in the region and what obstacles it is facing in its development, read further in the RIA Voronezh article.

Almost every Saturday, athletes gather at the Olympic Sports Complex, at the intersection of Pashkina and Yuzhnaya glades. Beginners look for this place on the map installed at the entrance to the sports complex, but the best guideline is dog howl that can be heard from almost a kilometer away. Olympic has several good tracks for racing - 2, 4, 6, and 8 kilometers long. It is also convenient for conducting training for beginners. 19 husky dogs and a friendly Samoyed dog, Umka, are waiting for their turn to take place in the harness. The impatient animals dig the ground showing their willingness to ride the newcomers. 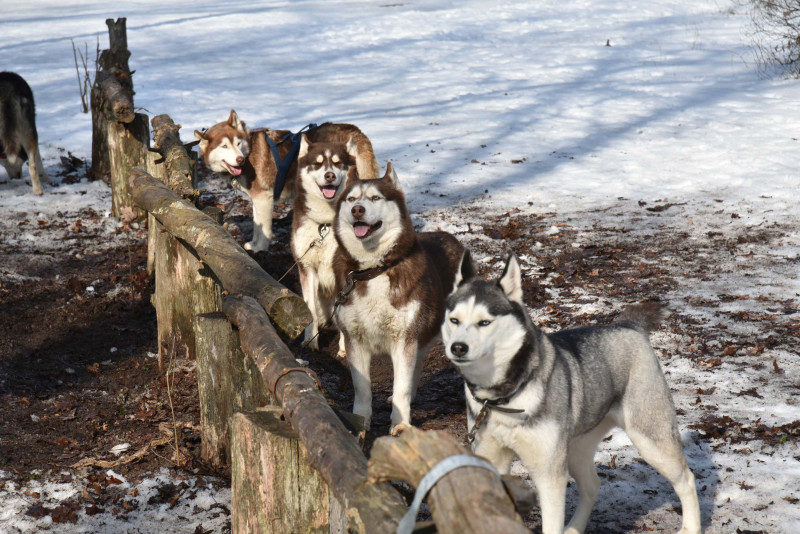 “In order to learn how to manage a sled, one must undergo safety training, try a sled without dogs - figure out where the brake is, how to turn it. You need to talk with dogs in order to understand which commands of your voice they are listening to and which they do not. The initial training is going straight. They launch you, then they control the backward turn and start you back. Then you need to learn how to turn on the sled, how to drift. Only after that, you can get to riding in laps,” said Svetlana Nikishina, president of the Sled Dog Sports Federation of the Voronezh Region. 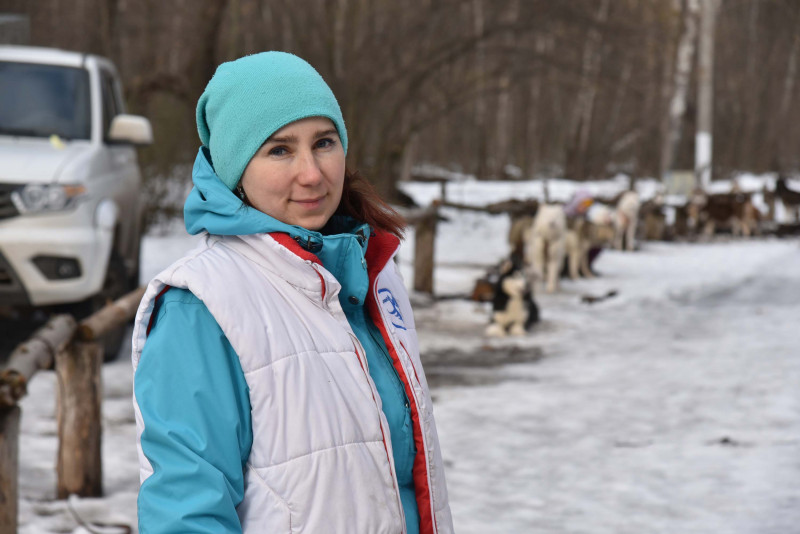 The founder of the Voronezh sled dog sports is a biologist and chemist by profession. She has worked as a designer and a realtor but found her calling when she got two West Siberian Laikas and then a husky. After riding in a sled I wanted competitions, high speeds, but there were no coaches in sled dog sports and there was little information about it on the Internet. Only in 2016, when she learned about the existence of the Russian Sled Dog Sports Federation, Svetlana realized that without a team and organization it would be difficult to raise the level of her favorite sport in her native region. 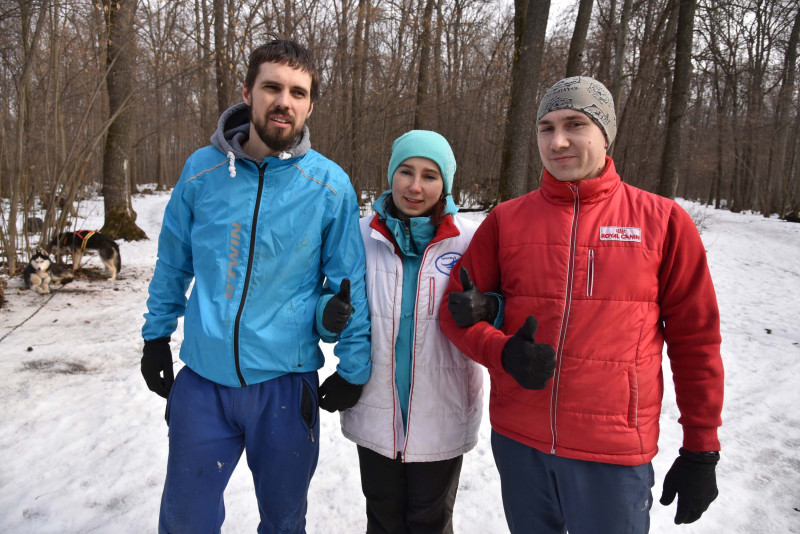 Three years later, Voronezh dog-team drivers already have awards of Russian championship and the experience of performing at the stages of the World Cup. There are talented juniors, rank holders, master of sports candidates and even members of the Russian National Team. And if people do not rest on their laurels for a long time after their victories, for dogs each ride and the confidence of a dog-team driver is a significant reason for pride. 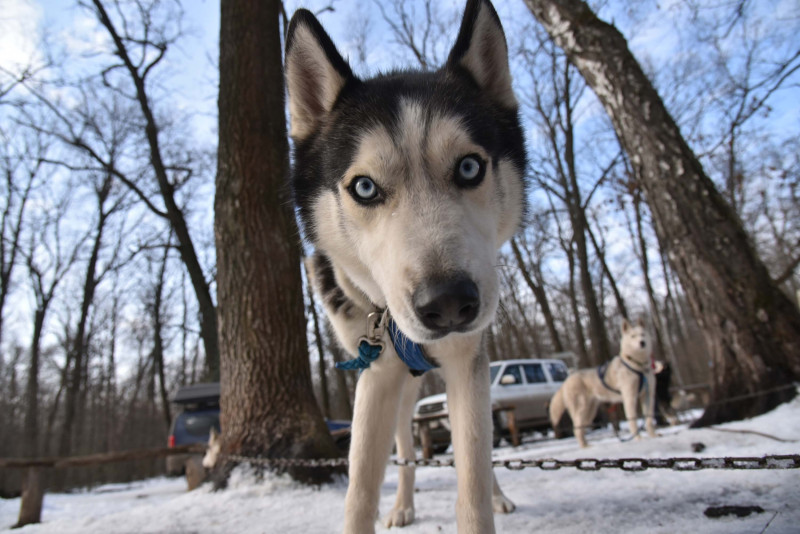 “They are offended if they are not put in the harness. They have a rating: if one dog was put in a sled several times and the other was not, then its status is lower. And they make up this rating for themselves at that,” Nikishina is sure.

Dogs train year-round because in sled racing there are snowless disciplines unites by the term dryland. It includes racing on scooters, carts, bicyclesб and caniross - running with a dog. Contrary to stereotypes, almost all breeds are suitable for sledding. The dog must be able to go the distance with a load. This means that the Yorkshire Terrier or Pekingese will not become athletes. High demands are placed not only on dogs but also on the drivers. 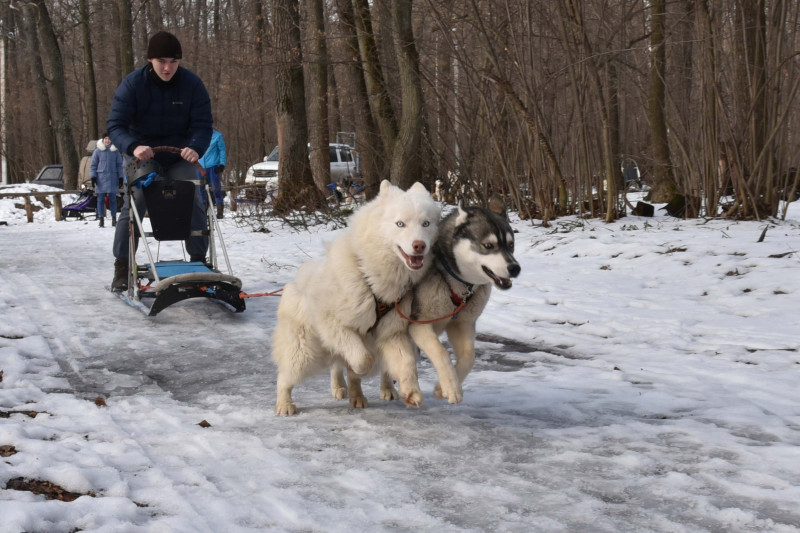 “The athlete himself must be in good shape to push off with his legs and help the team. You take the sled and go the distance without dogs moving the sled yourself. In general, there are no trifles, the skill of a dog-driver takes years to polish. The first thing to progress in is the technique of handling the gear. It can be a sled, a scooter – whatever you ride. The cleaner you go through each turn, the faster you go. Another aspect is preparing the dogs for the competition. There are different methods; you need to conduct endurance, speed, and strength training for animals. You also need to choose the right nutrition and vitamins for dogs and visit your veterinarian regularly. And another aspect of dog-driver mastery is direct interaction with the dogs. The better animals and humans understand each other, the greater the result. About a month and a half before the competition, you determine the dogs that are currently in the best shape and begin preparing them for the challenge,” said Kirill Khoteev, a bronze medalist of the Russian Championship. 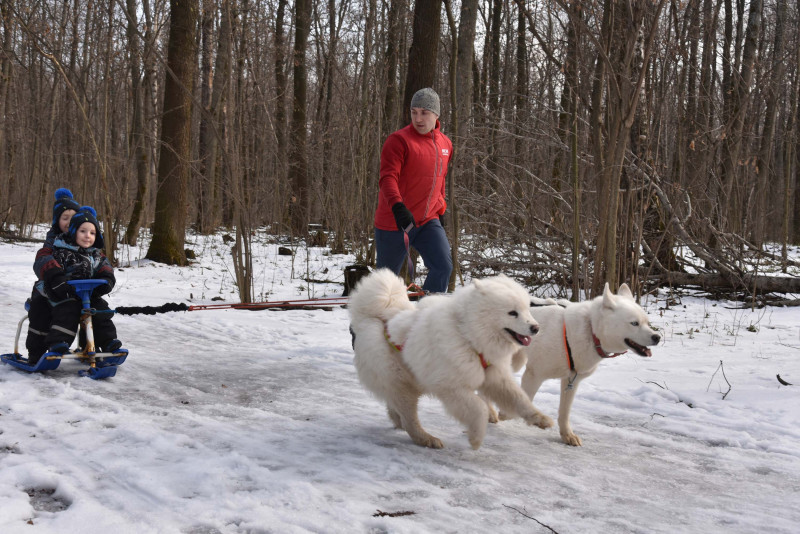 15 years ago, Khoteev could not even imagine himself in a sled – today's leader of the National Team did not like dogs since his childhood.

“I had a psychological trauma - once, when I was very young, I was bitten and barked at, I was very scared then. And I hated them. And then I met a girl who had dogs. I had to get acquainted with them. Huskies are easy to be friends with. They are kind, sociable, I understood their psychology. Now I love them. For me, this is an opportunity to fulfill my potential. In Olympic sports, there can be no victories. And here you have unity with nature, physical development, positive energy, and competition. As for me, this is an ideal sport. The interaction of man with animals makes it unique. The dog-drivers and dogs can be as strong as they come, but nothing will work if they do not understand each other perfectly,” the athlete emphasizes. 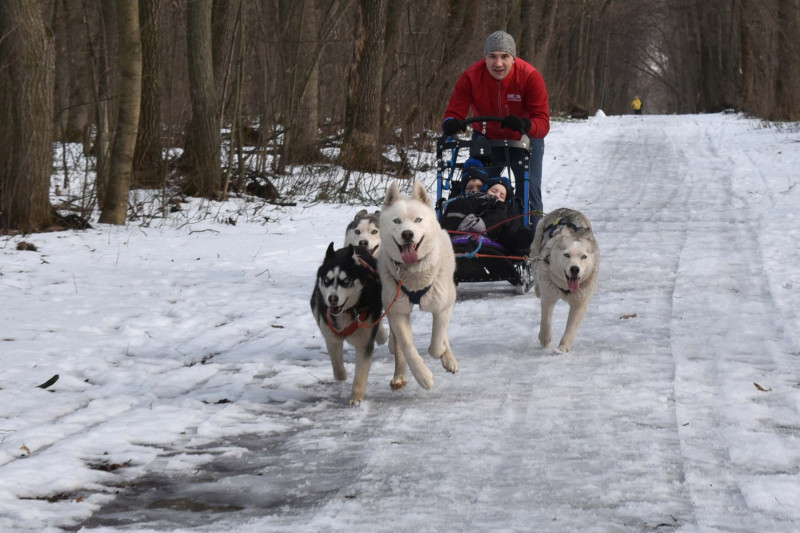 Success despite all odds

Despite all their successes, the dog-drivers admit that sled dog racing in the Voronezh Region is yet in an infant state. The athletes dream of a training center where dog-drivers would have several different tracks at their disposal in the complete absence of walking people. 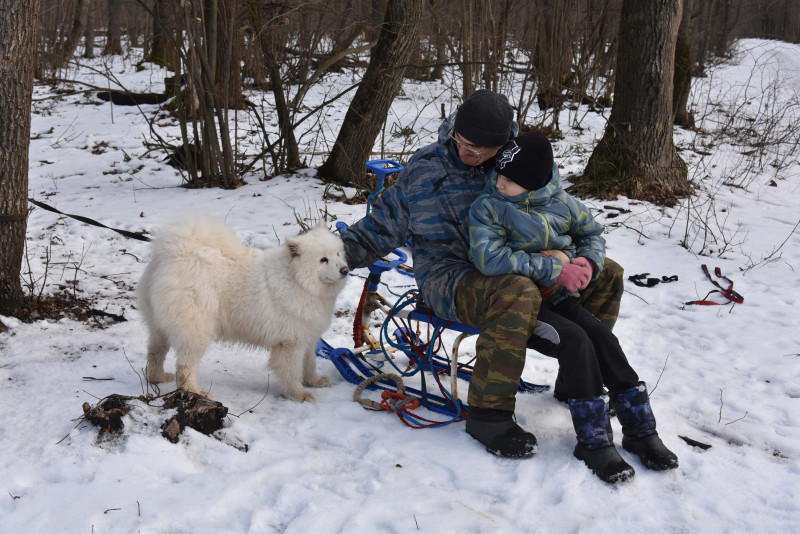 “There are not enough training places. Even in order to train at the Olympic Sports Complex, a lot of work had to be done - getting all our training tracks approved, getting everything signed. Fortunately, it was not hard. We ourselves see that our competitions do not overlap with other city-level events. If the skiers start, we choose a different route so as not to interfere. Unfortunately, skiers are not always willing to choose a different route to not interfere with our competitions or training. Sometimes you have to literally conquer the track - stop and remove the skiers’ sticks aimed at us. They do not understand what the sport with dogs is. We have repeatedly encountered skiers trying to pierce a dog with a stick,” Svetlana Nikishina complains.

Without an infrastructure, athletes cannot start training young dog-drivers en masse. The succession of generations of sled dog sports fans requires schools and union rates for trainers. The northern regions of the country have all this, children there can start going to athletic classes from the age of six. On the other hand, creating a school with only private investment is difficult. Athletes already can hardly find sponsors in order to at least somehow offset their costs. Most successful dog-drivers are owners of their own businesses with passive income. This allows them to spend time training and traveling to competitions. 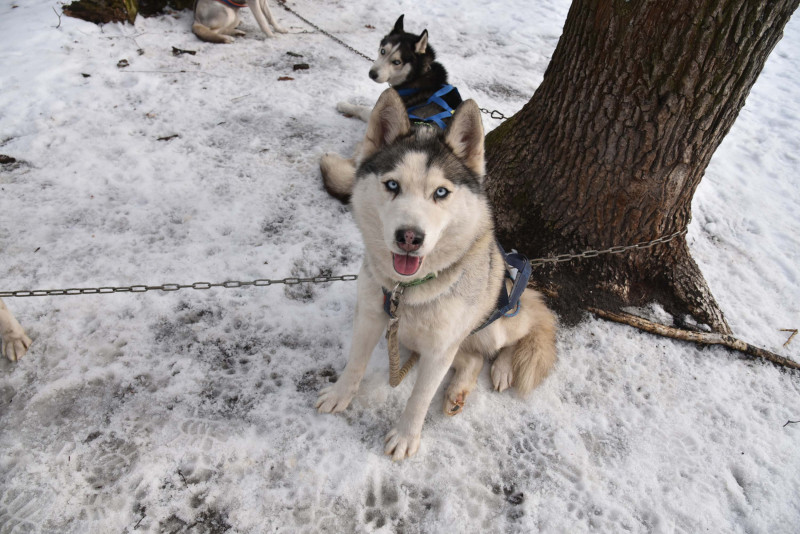 “Sled dog racing is an expensive sport, unfortunately. It cannot become a means of earning. Our dogs’ food costs about 30 thousand rubles a month. Plus vaccinations, documents, tick protection. That’s another thousand rubles per dog. People often ask where the training center is located. And we only have a private house and a small area with aviaries. We have about four to five away competitions a year. That’s 700 to 1,5 thousand km in one direction. We load and drive cars, all at our own expense,” the president of the Voronezh Region Sled Dog Sports Federation lists.

Voronezh dog-drivers note that as long as all the attention and resources in Russia are spent on the Olympic sports, other countries will be ahead of it in the development of dog sled racing. 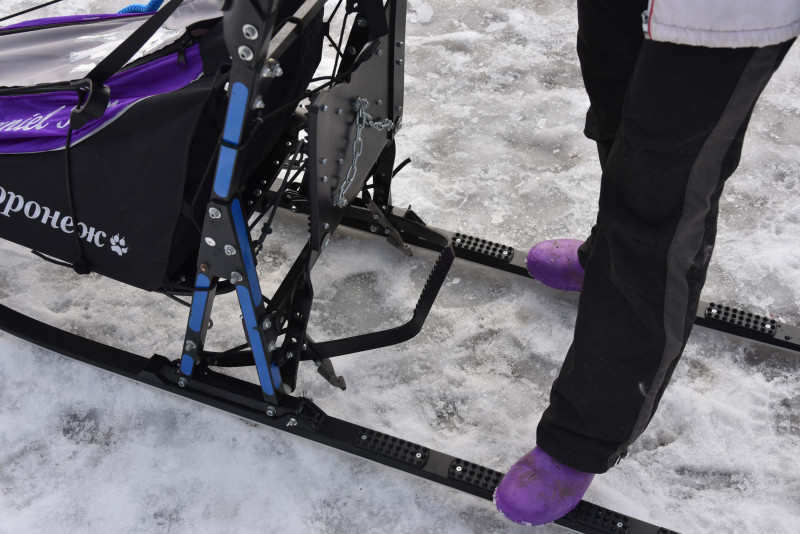 “We do not even have our own manufacturer of equipment for training and competition. Russian athletes use handicraft equipment or order it from abroad. A European sled, for example, costs about 150 thousand rubles. And the difference in class is really tangible. I would like to popularize our sport, make it interesting for everyone. And most importantly - to make the union of man and dog more sport-like, to make owners of animals lead a healthy lifestyle - not smoking or drinking beer while watching the dog run on a long leash, but playing with it. You can run with a dog, ride a bike with it. Our sport is as democratic as possible. There are many huskies now, it's trendy. I would like to let people know that such dogs need to do what they are supposed to. For them, it is a sport, health improvement. For a human, a sled ride is always an adventure that is remembered for a long time,” Nikishina assures. 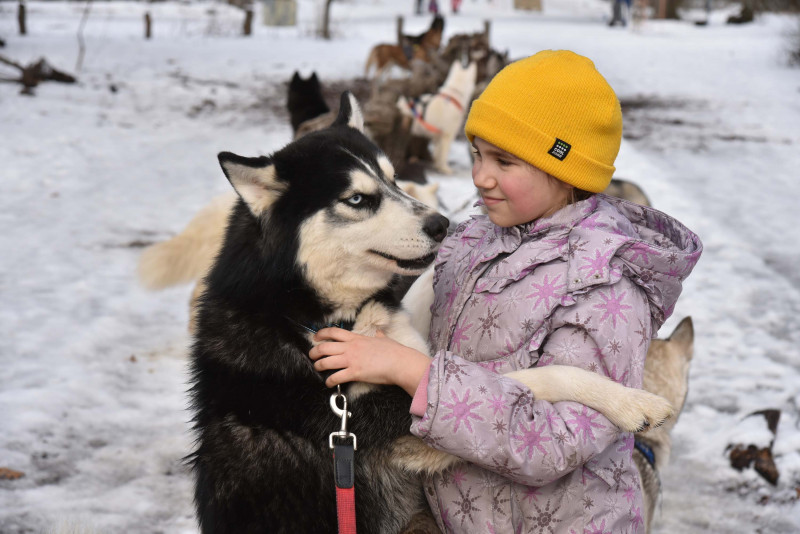