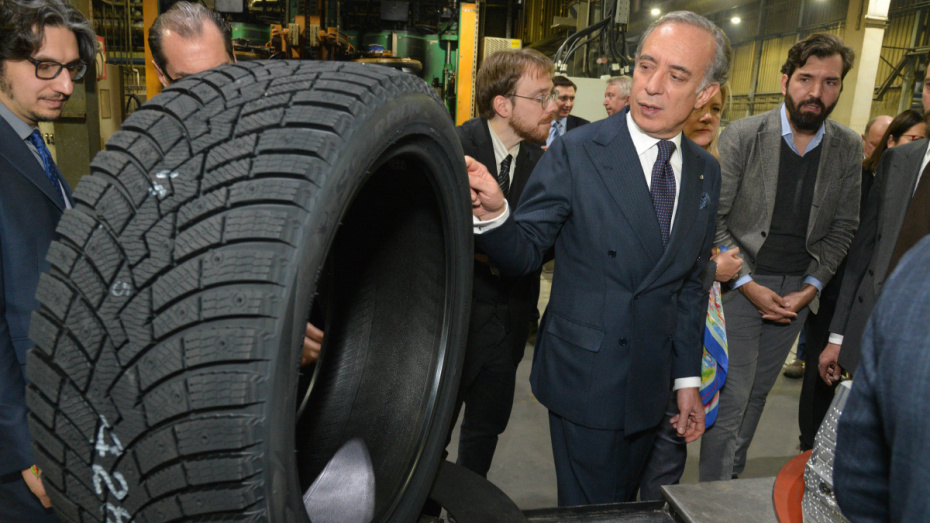 Pasquale Terrachchana attended the business forum in the capital of the Black Soil Region.

The Voronezh Region Government presented the economic and investment potential of the region to the Ambassador Extraordinary and Plenipotentiary of Italy to the Russian Federation Pasquale Terrachchana during the Russian-Italian business forum on Thursday, March 14. The opening ceremony was attended by General Director of Pirelli Tire Russia, Aimone di Savoia.

Yuri Gribanov, General Director of Voronezh Pirelli Tire Plant, said that the Ambassador’s visit is a historic event for the region. This is the first such visit to the Voronezh Region in recent history.

Pasquale Terrachchana thanked Governor Alexander Gusev for the warm welcome. He noted that the idea to hold a joint business forum arose a year ago during the Investment Forum in Sochi.

– I believe that such enterprises as Pirelli can find a favorable climate in the Voronezh Region, rely on regional benefits, the Ambassador said. - This is important for the implementation of the initiatives that we plan to create. The Italian presence in Russia is based not only on the desire to receive income, but also on a long-standing relationship. As you known, Russia is a strategic partner for Italy. We have close relations in the field of energy, commodity turnover (21 billion euros in 2018). In the near future, we plan to return to the pre-crisis indicators – 30 billion euros per year. We face a difficult but exciting challenge: to expand the Italian presence in the Russian market, to strengthen the export of Italian machinery and equipment.

Special attention, according to Pasquale Terracciana, should be paid to small and medium-sized businesses. He said that a pilot project is being developed jointly with the Russian Direct Investment Fund – the creation of a fund for the development of small and medium-sized businesses. The work will be aimed at opening joint ventures. Previously, a similar program already operated.

– The package of sanctions stopped the activities of the previously operating fund without any sound reasons. Now we are working on its renewal, explained the ambassador. He stressed that the business forum should become a traditional event.

Governor Alexander Gusev noted: the dynamics of the development of relations with Italy suggested that already at the next joint business forum he would say a few words in Italian.

– We will try to adequately react to your interest. We can offer potential investors a wide list of areas for cooperation. Our achievements are based on a favorable business environment, said Alexander Gusev. – We intend to pay even more attention to creating a barrier-free environment for business.

The head of the region added that the Voronezh Кegion had long been cooperating with Italy in the field of education and culture. It is necessary to make so that “this baggage replenishes with economic interaction cases”.

“The trade turnover between us has been recently increasing, perhaps slightly, but this tendency allows us to look to the future positively,” the Governor continued. – We are already implementing a joint project with Pirelli in the region. I think we can continue the accumulated experience of the relationship, which gave a positive effect in other joint projects. I think that the number of our partners will increase after the forum. The Voronezh Region authorities will do everything necessary to implement all successful initiatives.

The Honorary Consul of Italy in Lipetsk Vittorio Torrembini emphasized that this period could be called a renaissance for the Voronezh Region. He stated that Italian production should be represented in the Voronezh Special Economic Zone.

The investment potential of the Voronezh Region was presented by Deputy Governor Vitaly Shabalatov. He noted that the level of GRP reached almost 1 trillion rubles, the volume of investments over the five years – almost 4 trillion rubles, foreign trade turnover – more than 2.6 billion rubles. Industry and agriculture demonstrate  a confident dynamics. In addition, Vitaly Shabalatov reported on the work of the industrial park and the creation of a Special Economic Zone.
General Director of Pirelli Tyre Russia, Aimone di Savoia, said that the plant produces 2 million tires per year in the Voronezh Region. They focus on premium tires. To expand production, they decided to invest 100 million euros in it.