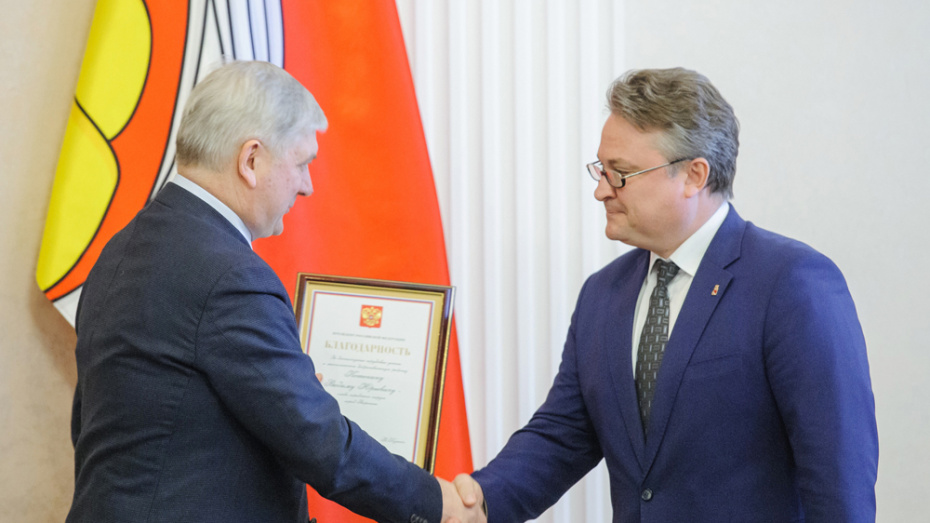 Vadim Kstenin took the award as an additional insensitive for work.

Voronezh Mayor Vadim Kstenin received the commendation from the President of Russia Vladimir Putin "For the Achieved Work Success and Many Years of Conscientious Work". The award was handed over by Governor Alexander Gusev during a briefing session of the Regional Government on Monday, February 10.

During the presentation, the Head of the Region wished the mayor further success in the office and the prosperity of Voronezh.

“It is very difficult to consider the award from the president of the country to be fully deserved - it is such great an honor. I accept the commendation of the head of state as an advance, as an additional insensitive for work,” said Vadim Kstenin.

Vadim Kstenin began his career in 1998 at OJSC Voronezhnefteprodukt. In 2008, he transferred to the Voronezh administration, where he had worked until November 2009 before taking the post of deputy general director and the head of the Department for Commissioning Facilities of the Voronezh Region’s state enterprise “Unified Directorate for Capital Construction and Gasification”. From February 2010 to December 2015, Kstenin led the Directorate of Housing and Public Utilities and Power of the Voronezh Region. In December 2015, he was appointed Acting First Deputy Head of the Voronezh Administration for Municipal Economy. In February 2016, Kstenin took the post of First Deputy Head of the Administration for Municipal Services. In December 2017, he became the Acting Head of Voronezh, and in April 2018 he officially entered the mayor’s office.