“I dreamed about this since childhood.” Pensioner from Voronezh hinterland owns 15 squirrels 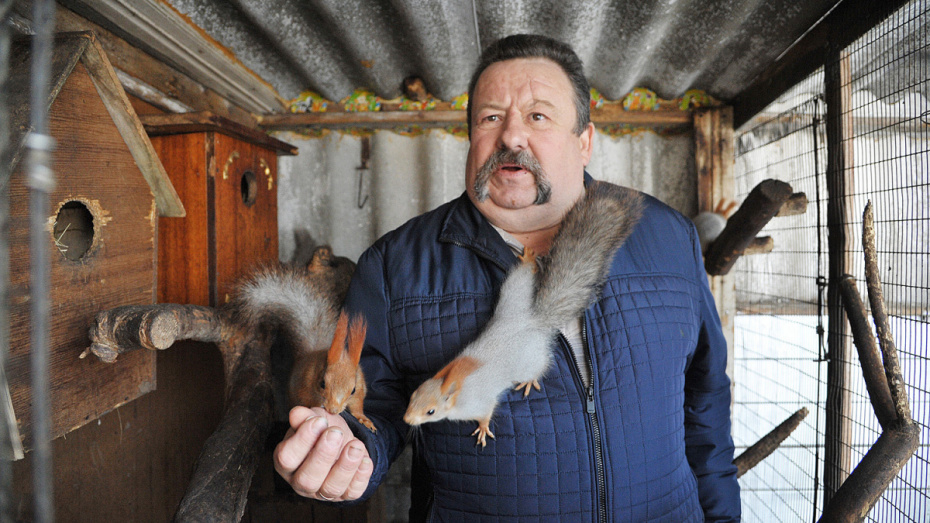 In the courtyard of Vladimir Kaverin’s house, teleuts live side by side with birds.

A pensioner from Povorino, 60-year-old Vladimir Kaverin, is the owner of more than 200 birds: almost a hundred thoroughbred pigeons, peacocks, pheasants, mandarin ducks, quails, doves, several species of parrots and even wild birds: tits, yellowbirds, and finches. The pensioner has a particular soft spot for Altai squirrels - they are also called teleuts: he has as many as 15 of them. Vladimir Kaverin has owned the furry animals for seven years. He told RIA Voronezh correspondents about the nature and temperament of the squirrels and how they “treat” their owner. 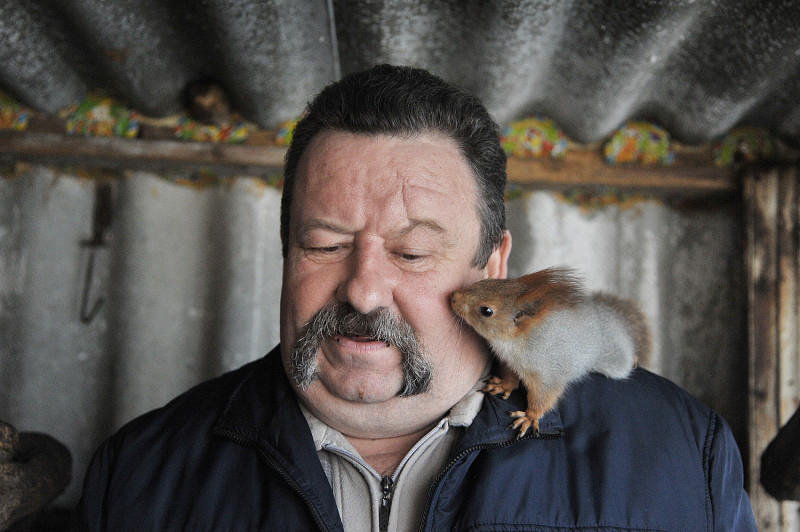 “Finally made a decision”

All the living creatures in Vladimir Valentinovich’s courtyard live in special barred open-air cages with a total area of about 60 square meters, which the owner covers with cellophane from the outside in late autumn so that his pets do not freeze.

– They are not afraid of cold, the main thing is that there must be no wind and air leaks, – Kaverin assures.

The pensioner gave two small cages to 15 squirrels of the Altai breed. These squirrels are bigger than those that Voronezh people are used to seeing in city parks. 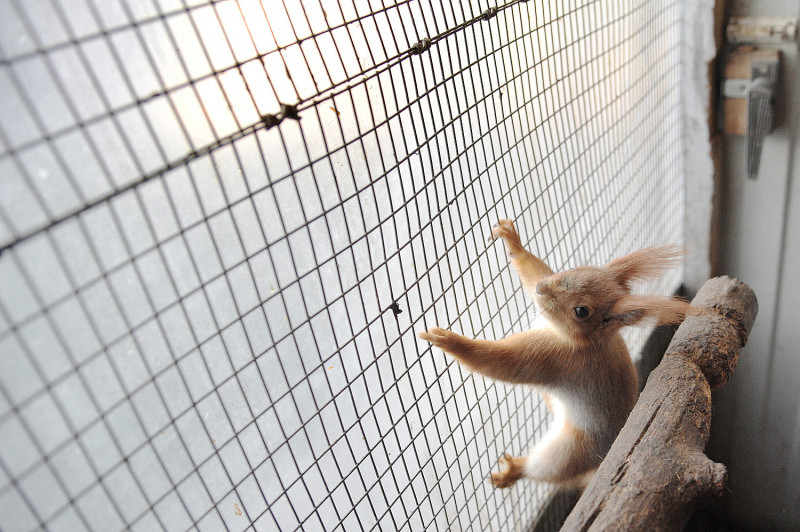 – I have been into pigeons since childhood, – said Vladimir Kaverin. – I still have a passion for them from my father, an avid pigeon breeder. Since about the 2000s, I began to “blend” them with other exotic birds, but as for squirrels, I have been into them for seven years. Even as a boy, I wanted to have a squirrel at home, but recently I began to read about these animals, about how to keep them at home, and finally made a decision! I wrote to and called the Altai squirrel breeders until I finally bought myself a couple of them from which the entire family was bred. At times, I had wild squirrels that I had bought at the market in Borisoglebsk living along with them, but they are completely different, and interbreeding different breeds is ill-advised. 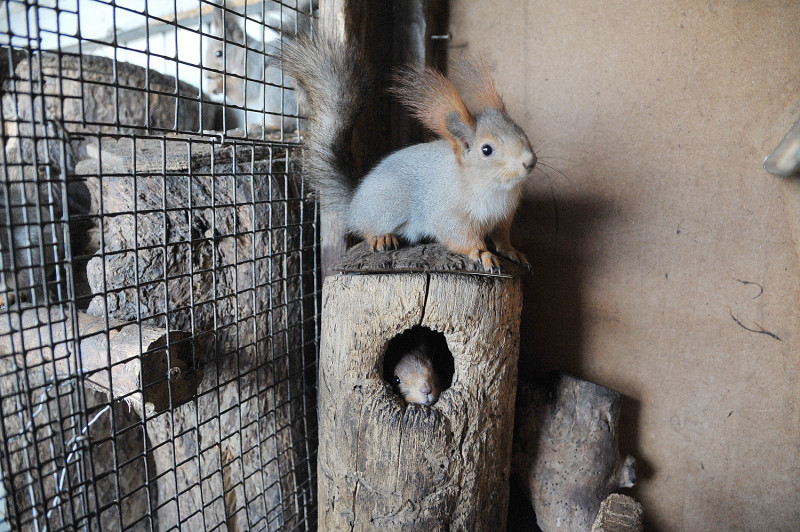 Vladimir Kaverin now has 15 squirrels (at times their number had reached 30) living in two aviaries on an area of approximately 8 square meters. When the journalists of RIA Voronezh entered the enclosure, the animals became frightened and quieted down, but after about five minutes, as if realizing that the owner was nearby, they started to run and jump over the shoulders and heads of the uninvited guests, as if trying to get them engaged them in a game. They jumped from the shoulders of the journalists directly onto the enclosure bars, then onto the floor and from there, clinging to the jeans with their claws, they again climbed on to the shoulders.

– They are trying to get to know you, – Vladimir Kaverin explained. – The animals are very curious, and they won't just leave you alone now. 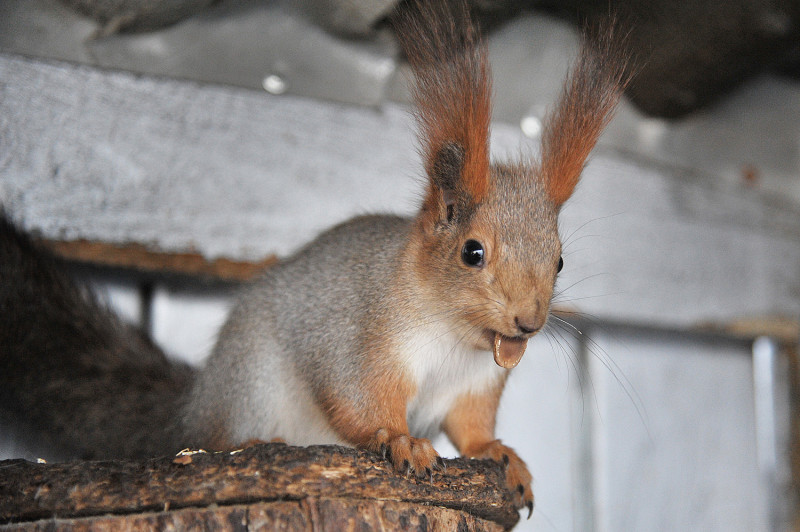 But not all the animals came to get acquainted with the guests, some remained lying in the hollow. For example, the squirrel with the darkest color was not at all interested in the company of the new people.

The enclosures contain more than a dozen squirrel houses: some look like large birdhouses, others are trunks of old trees hollowed out from the inside and covered from above - true hollows, such as those in which the animals live in the wild.

All these "houses" were hammered together and hollowed out by Vladimir Kaverin himself. According to him, ideally, one pair of squirrels should have three birdhouses each - a separate living space for the “wife”, a separate one for the “husband” and another “apartment” for them to breed. 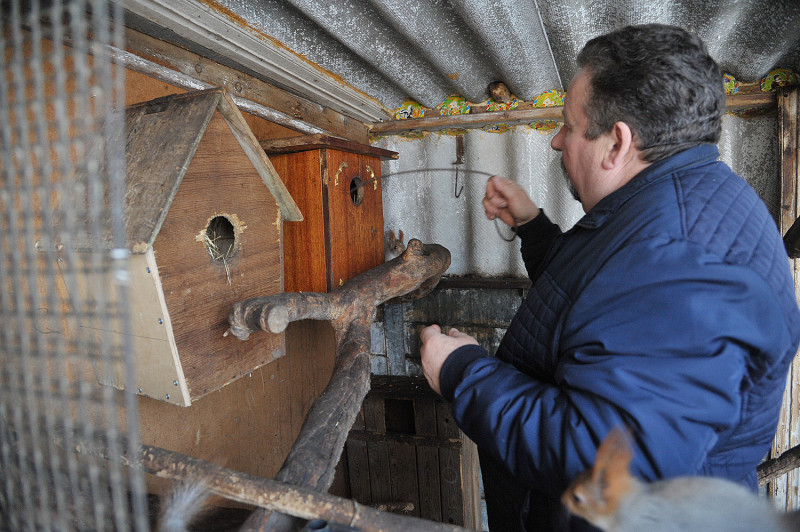 – Squirrels usually have two males per female, – the owner said. – It is the future mother, not the father, who chooses a mate. The estrus begins in February, and pregnancy lasts 33-35 days, after which from three to eight squirrels are born. During the year, a squirrel can give birth twice. I have several generations of teleuts living here, which I feed with nuts (squirrels eat hazelnuts better) and pumpkin seeds. I kept my first animals at home, but that’s impracticable - they rush about like mad around the rooms, jump across the curtains, gnaw on wires and cables. Their temperament requires a restriction in the form of aviary bars.

Sometimes even metal is not an obstacle for the curious nimble animals - two years ago an old squirrel went outside through a hole in the floor discreetly dug by rats. The animal did not run far - it had jumped across the trees in the yard for several days, and Vladimir Kaverin’s attempts to catch it with a butterfly net had failed. Imagine how surprised the owner was when at a certain point he opened the door of the squirrel cage, and the runaway, who was waiting for him at the threshold, slipped inside! 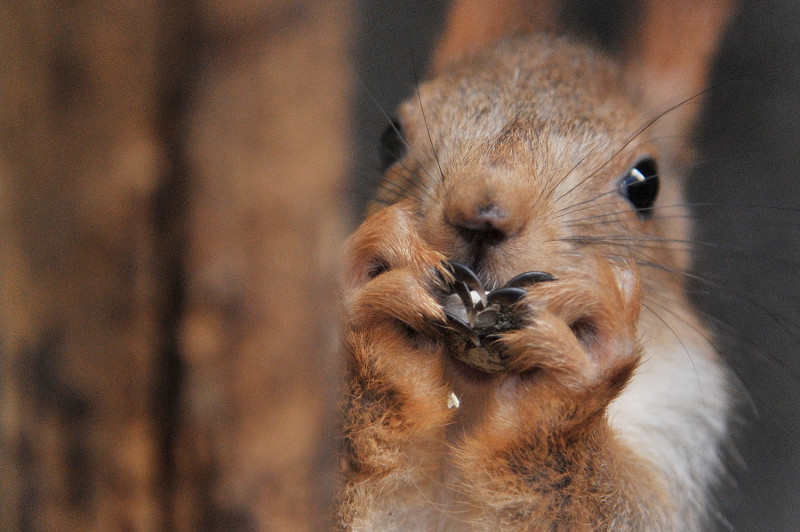 – So much for understanding them! – he is puzzled. – Why would it return to captivity again? After all, not a single domestic squirrel, once in the wild, will die from hunger or cold - it can both find a hollow for itself and get food! An old male also ran away from me one time - he simply jumped out into the yard when I was leaving the enclosure. But he never returned - they say he lived in the neighbors’ yard, but then he disappeared somewhere.

Squirrels are predators, and this explains some features of their behavior: sometimes they slip into the adjacent aviary to the turtledoves and kill their young ones. There were even a few cases when old squirrels ate other squirrels’ cubs - not from hunger, but because of their instincts. 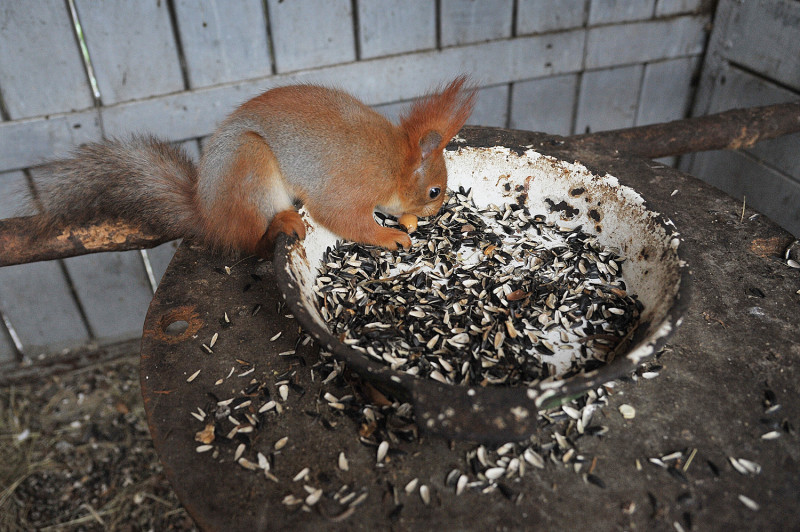 According to Vladimir Kaverin, squirrels have an independent nature - they will not sit in a person’s hands, they will only allow you to pet them fleetingly:

- They can be trained, if you consider some aspects related to feeding as training. For example, when it is time to eat, the animals begin to jump on you and take seeds or nuts out of your hands. Sometimes I even feed them out of my mouth - I grip the seeds with my teeth and a little squirrel climbs up to “kiss”, trying to take this treat.

Vladimir Kaverin pressed a seed in his teeth, and immediately two squirrels climbed onto his shoulders - one of them began to gnaw at the treat. 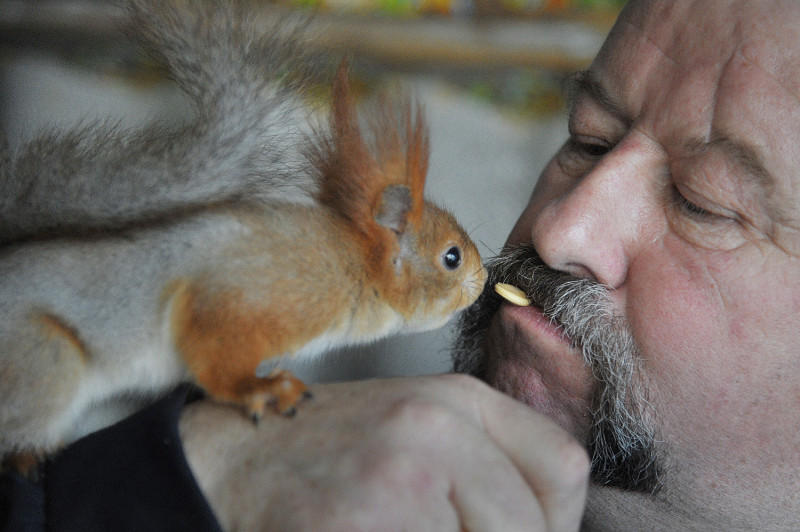 RIA Voronezh correspondents fed several animals with their hands – the squirrels willingly sat on the palms and, even when there were no seeds left, scratched them with their paws, as if offended that the treat had ended too quickly. 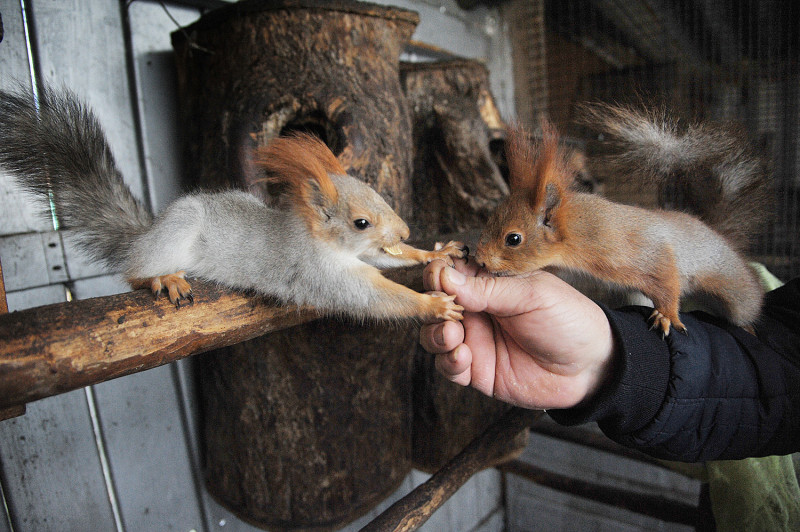 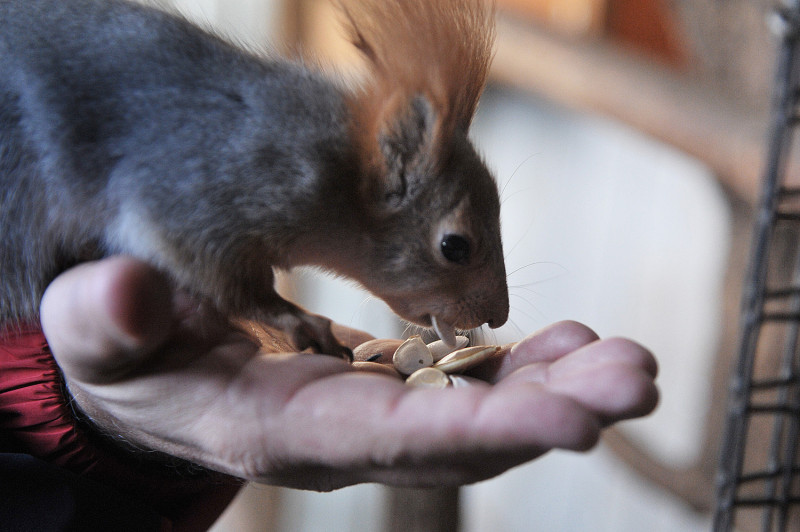 The pensioner does not keep his pets for business - he rarely sells or buys squirrels: he has an already formed stock with close family ties. And in order to have enough funds to keep all the pets, he also keeps 60 bee families.

For Kaverin, communication with the animals is the best medicine. Vladimir survived several strokes, and it is his livestock that helps him maintain his tone.

– The best thing for me is to take a little bench, put it in a squirrel cage and sit there so that squirrels jump over me, climb on to me, take food from my hands. In these moments, my tone improves, my blood pressure stabilizes, I calm down and try to sit with them for longer, – Vladimir Kaverin admitted.