“To my dearest soldiers”. How handful of soil from Voronezh village has ended up in Czech Republic and Germany 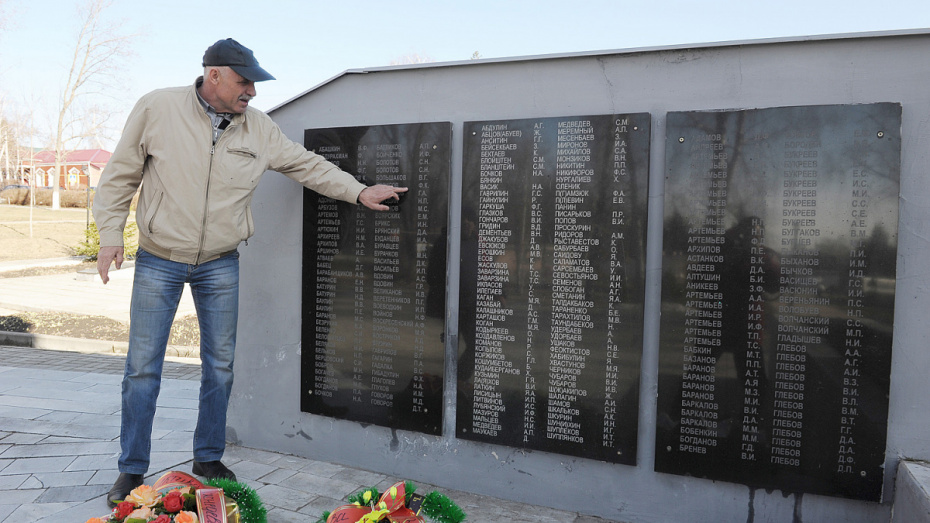 How the head of the settlement honored the memory of his grandfather and uncle.

Vladimir Borisov, the head of the Nizhnee Turovo rural settlement of the Nizhnedevitsky District, was born 15 years after the death of his grandfather. Filipp Kuzmich was executed by shooting on September 5, 1942, in the village of Nizhnee Turovo, a couple of hundred meters from his house, in front of his wife of Ksenia and daughter Nastya. He was only 37 years old. Three years later, the eldest son of Filipp Borisov, Ivan, died in the war. Many years later, Vladimir Borisov brought a handful of soil from his native village to the places of their burial. To do this, he had to go to Germany and the Czech Republic.

To learn about the unusual military story of the Borisov family, read the RIA Voronezh article.

The Borisovs, the Novichikhins, the Koltakovs - all these surnames are local, from Turovo and Verkhnee Turovo. Before the war, the head of one of several neighboring collective farms – Krasny Kooperator (Red Cooperator) - Filipp Borisov was known throughout the district. The administrator of one of the best farms in the region, he was in charge since about 1938. When the war broke out and more than a thousand Nizhnee Turovo residents went to the frontlines (only about 400 of them would have returned), the collective farm had worked under his leadership until the summer of 1942, when the invaders came to that land. 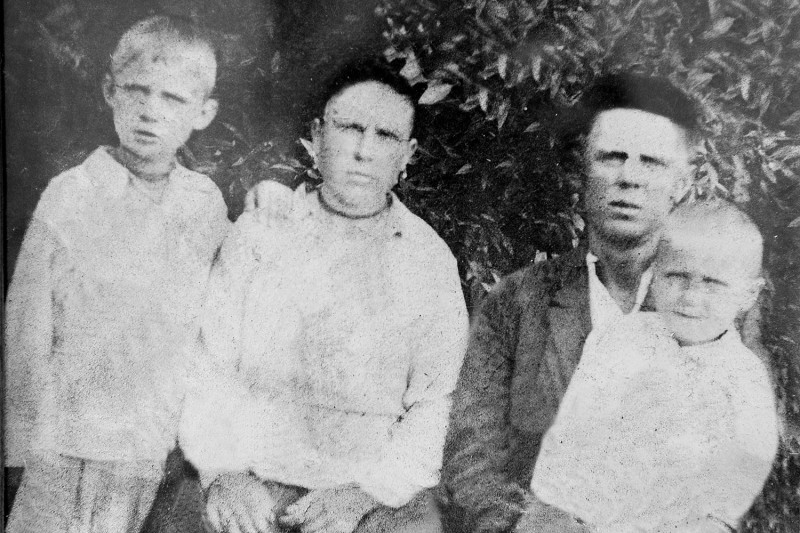 “I have compiled a family archive of my relatives connected with the war one way or another. This is how it became known that my grandfather was mobilized to the front in August 1941 - he even left home but returned two weeks later and continued to work on the collective farm,” Vladimir Borisov told the RIA Voronezh correspondent. “There is still no exact information about why he was returned. Most likely, he, as a communist and the head of the NKVD, was sent to his native land to establish the underground work. There were no serious partisan detachments on our territory during the years of occupation (from the summer of 1942 until the winter of 1943), but he probably returned home with some sort of special task.”

But everything turned out differently. The Germans came to Nizhnee Turovo in June 1942 and, according to the village old-timers, there were no particular atrocities - the occupants, as usual, drove the locals out of the houses and occupied them themselves, forced the people to dig trenches, but there were no mass executions and executions by shooting carried out. 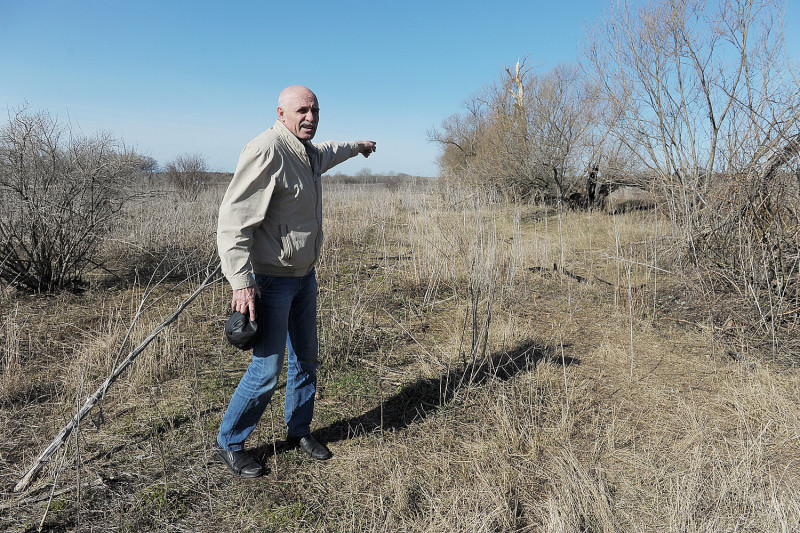 The place of Filipp Borisov’s execution

And Filipp Borisov was turned over by two female neighbors. They reported that he was a communist, the head of the collective farm, and might be somehow connected with the NKVD. By the way, after the invaders were driven out, both of them were sentenced to ten years in prison camps.

“My mother, Anastasia Filippovna, was 14 at the time. She said that the father was taken from the house, beaten, and kept for a whole week in a shack, which stood exactly at the place where the yard of my village house is located now,” said Vladimir Borisov. “They checked all the data about the father. They took another Nizhnee Turovo resident together with him. And after about a week, the Germans drove the peasants to the outskirts of the village, where the garden ended and the cattle cemetery began. Those who didn’t want to go were driven with rifle butts. Then they brought two shovels and forced my grandfather and his countryman to dig a grave...” 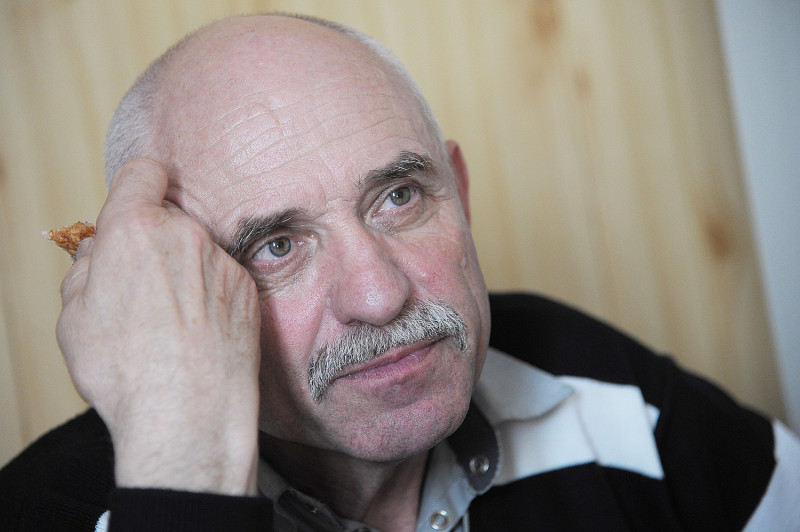 Anastasia Filippovna often told her son that the image of her father’s execution had stood before her eyes all her life: “There stands my father, next to him is our other countryman. My father is looking for me and my mother with his eyes, I don’t fully understand what is happening, then we hear shots and a many-voiced woman's cry heard all over the district: “They killed him!”

The Nizhnee Turovo resident, whose name Anastasia Filippovna did not know, died on the spot, and the wounded Filipp Borisov was later finished off with rifle butts. The body was thrown into the grave dug by him. 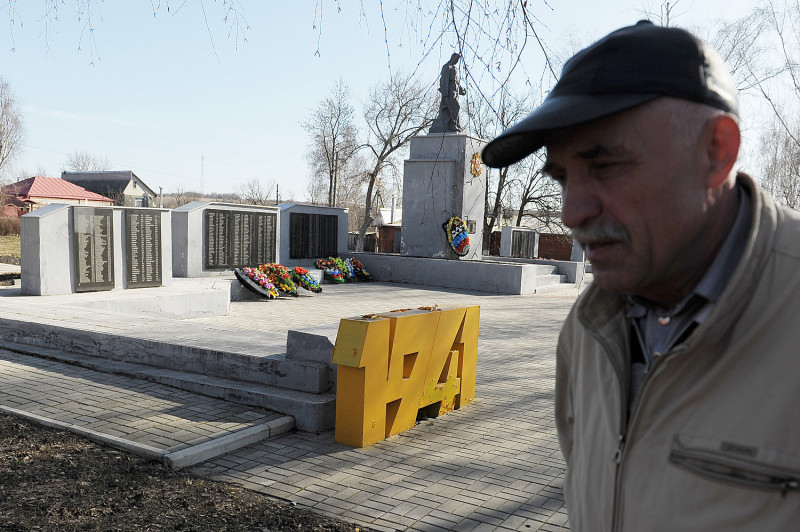 The bullet that caught up

In the summer of 1943, when the Germans were driven out of those places, the remains of Borisov and his fellow villager, as well as Soviet soldiers who had died in the vicinity of the Nizhnee Turovo village during its liberation, were reburied in a large mass grave in the center of the village. And already in 1946, or in 1947, all these remains were transferred to a huge mass grave in the center of Nizhnedevitsk, today’s burial place of over 700 Soviet soldiers and civilians who had died during the occupation. But the name Borisov appeared on the monument only in the spring of 2015, although for many years, the relatives knew for sure that it was exactly where Filipp Kuzmich had been buried. 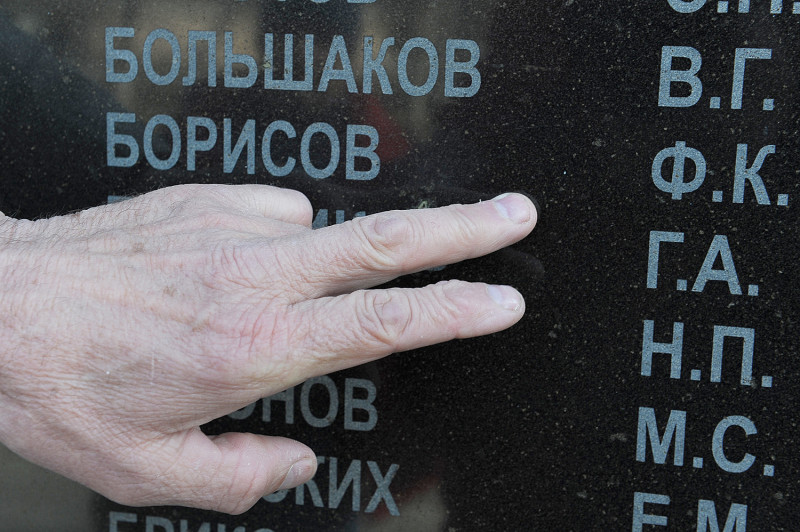 “I’ve tried as much as I could for 15 years to eliminate this injustice, wrote to different authorities that my grandfather lay here and it was necessary to memorialize him, but it was done only on the eve of the 70th anniversary of the Victory. At that moment, more than 200 new names were put on the monument including my grandfather’s. It was not there before most likely due to the fact that he did not die in battle but was shot by the Nazis,” Vladimir Borisov explained.

Another page of the military history of this family was written in the same years of the occupation of Nizhnee Turovo. In the winter of 1943, when Soviet troops advanced and the Nazis fled, another story happened to Vladimir Borisov’s father - Vasily Yegorovich - and his brother Ivan. 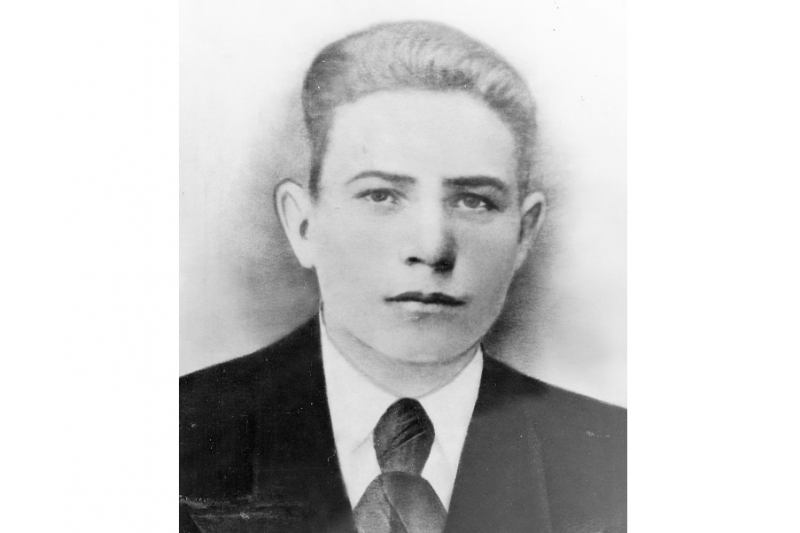 “At the end of January 1943, when the Germans had already fled and our troops had just entered the village, the Red Army soldiers were accommodated for the night almost in every house including ours. My father was then 15 years old and his brother Vanya was 17. Shooting began during the night, so the brothers put cast-iron pots on their heads instead of helmets and trembled all night as they lay on the floor. In the morning, when it dawned, they leaned out into the street, and then a stray bullet came from somewhere and hit Ivan in the back. He fell, but my father turned him over and realized that the bullet had already spent its force, it was just stuck in his brother’s padded jacket. Together they took it out.”

After the liberation of his village, Ivan went to Semiluki to study as an assistant engine driver. In the winter of 1945, his dream finally came true - he got to the frontlines. He had not fought for long though: Ivan died in Berlin on April 30. He was 19 years old.

“As my father told me all my life, the very bullet that didn’t take him at home finally caught up with him in Berlin,” Vladimir Borisov recalled. 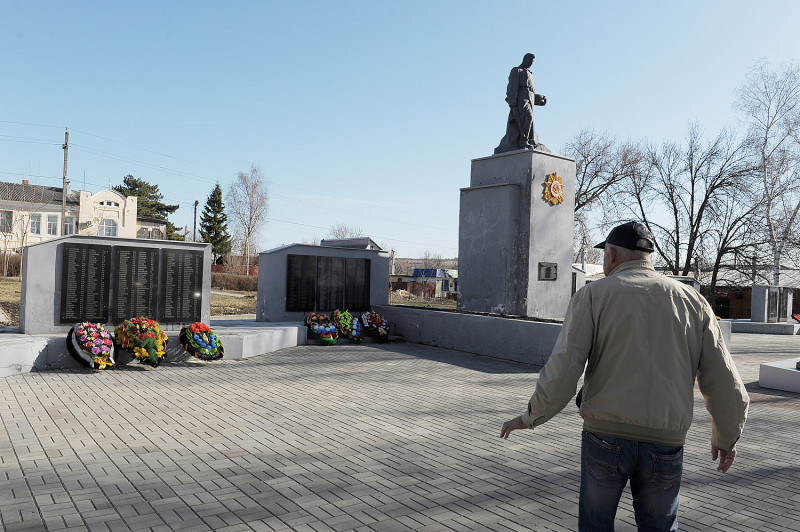 “I’ve managed to do everything I wanted”

In 2016, Vladimir visited his uncle’s grave in Berlin. A letter came to Nizhnedevitsky District, signed by Sonya Golechkova, a local historian from the Czech Republic. She asked for help in finding the relatives of a native of this land - tank crewman Alexei Zelenin, who died and was buried near the Moravian village of Kobylnice in 1944.

Vladimir Borisov went to the Czech Republic. With him, to the grave of his fellow countryman, he took a handful of soil he dug in the courtyard of the house, where the Zelenins family had lived before the war.

“But I also took another bag of soil with me. After visiting the Czech Republic, I decided to go to Berlin, where my uncle Ivan Borisov had been buried in the mass grave of Soviet soldiers in Treptower Park. In 2015, a paper came to the district that the place of his burial, which we had been looking for decades, was precisely established. We knew that he died during the attack on Berlin, one of his fellow soldiers even told me that the uncle was absolutely fearless - he walked to his full height when he could crawl and he finally ran into machine-gun fire,” added Vladimir Borisov. 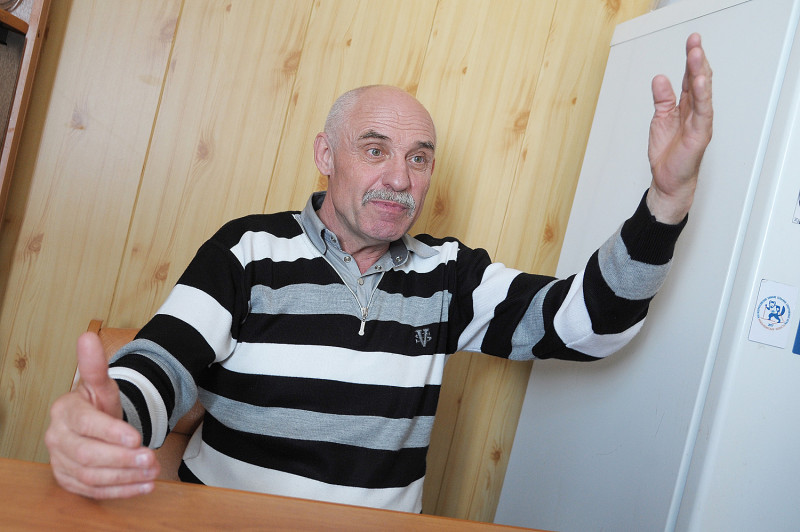 The man contacted the cultural attaché of the Russian Embassy in Germany, took the train and rushed to Berlin. There he was met by representatives of the embassy, given a tour of the city, and then was taken to Treptower Park, where he poured the handful of the Nizhnee Turovo soil on to a lawn overgrown with grass. 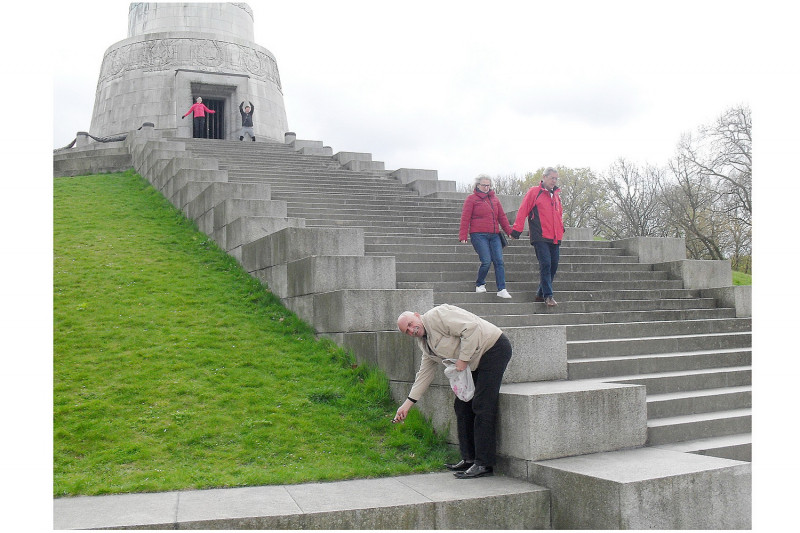 “Now I’m at peace: I’ve managed to do everything I wanted in my life – I immortalized the memory of my grandfather on the monument in Nizhnedevitsk and took my native village’s soil to Berlin where my uncle is buried. And this, in my opinion, is the best monument to my dearest soldiers!” Borisov summed up.