‘I crafted it out of despair.’ How Voronezh Region resident invented cultivator scythe 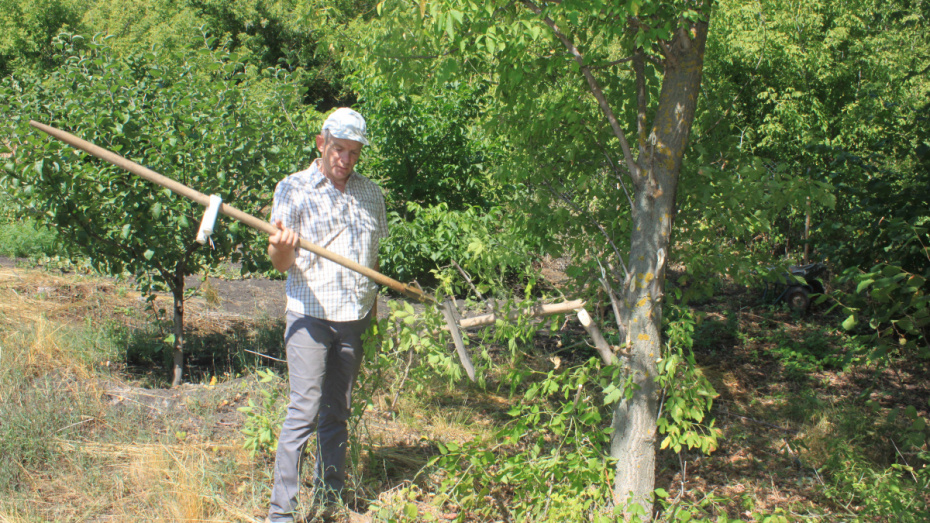 The tool is patented.

Oleg Panov, a fifty-year-old resident of the Paninsky District, grows peaches, several kinds of nuts, pears, and apples in his garden, has a plantation of 25 kinds of grape. On his land parcel, there is a pool with the purest spring water. Now Oleg Panov and his son-in-law are completing the construction of a bathhouse. And just seven years ago, according to him, this land was ‘a jungle overgrown with weeds’. The unique tool that Panov has invented himself - a cultivator scythe - helped him put the land plot in order. He patented the invention in 2013. It has no analogs in the world.

To find out under what circumstances the idea of creating a cultivator scythe was born and what its main feature is, read the RIA Voronezh story. 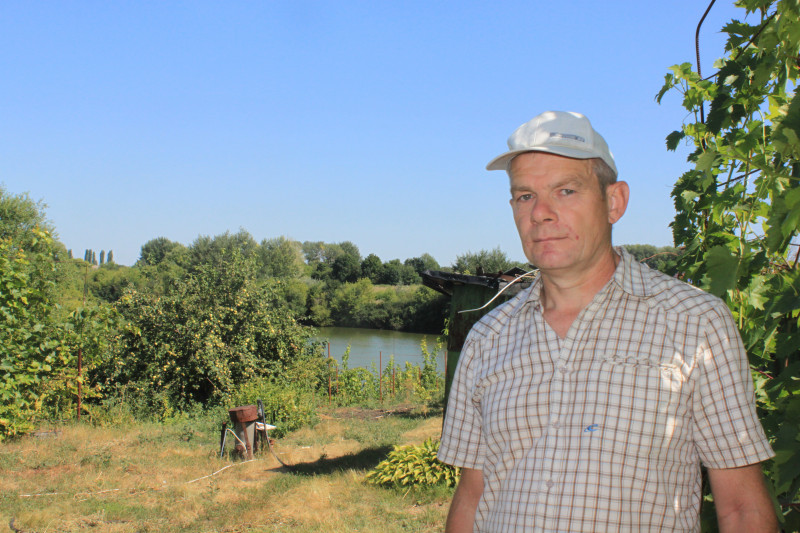 Oleg Panov, born in Panino, received his education in ichthyology and fish farming. After studying at a fishing technical school near Moscow, he worked for several years as a fish farmer at the Oktyabrsky fish farm. Then he and his family moved to Voronezh, he served in the Ministry of Internal Affairs for 18 years as a traffic police inspector. Having retired, he returned to the Paninsky District and settled in the Kriushanskoe rural settlement.

Oleg Panov bought a plot of land with a house in the village of Bolshoi Martyn seven years ago.

‘Everything was so overgrown that the house was not even visible,’ the man recalled. ‘The neighbor, looking at me with pity, offered a winch and a jack for uprooting the trees. Imagine his surprise when I put things here in order in two days: I mowed all the grass, cut down the old trees. I was able to deal with such a volume of work by using a tool I invented more than 20 years ago - a cultivator scythe. It mows grass, it grubs weed, and it chops branches.

At the time, Oleg Panov could not tell his neighbor how he had dealt with the weed and show him the tool for a good reason:

‘It was in 2013 that I finally decided to officially patent my invention. One of the conditions for its recognition as unique was for me not to show it anywhere. Another one was that there had to be no analog for it - not only in Russia but also in the world. For half a year, the experts checked, clarified, studied, tested the cultivator scythe and came to the conclusion that I was the first to invent such a tool.’ 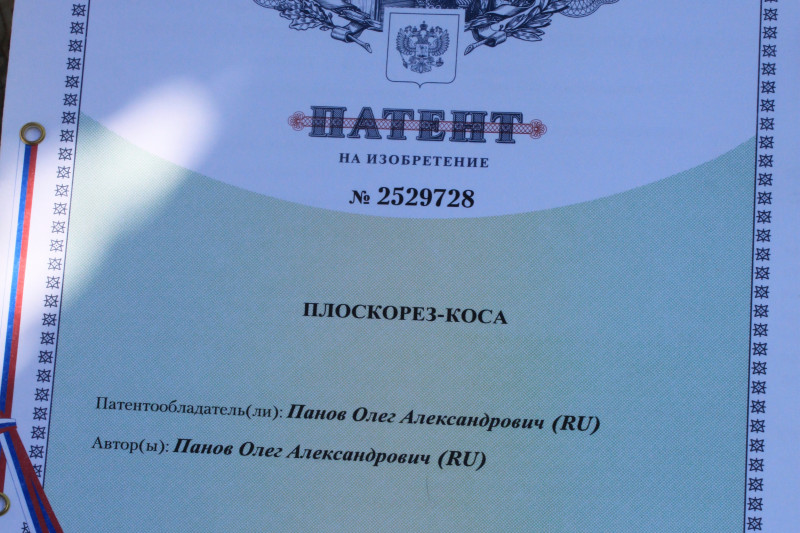 The cultivator scythe is a scythe with a modified blade and fasteners for it. The handle of the instrument can be adjusted to the height of the person. The cultivator scythe weighs only 1.7 kg. According to the inventor, the tool can be worked with by both women and the elderly and people with disabilities.

With the help of the cultivator scythe, it is easy to deal with tall weeds. The grip of the tool is bigger than that of a conventional scythe and the modified blade allows mowing in different directions, even towards yourself.

After processing the earth with the cultivator scythe, Oleg Panov does not cultivate it - he immediately starts planting. For example, he had been growing 600 tomatoes until his wife asked him to plant less: it was difficult to process everything. 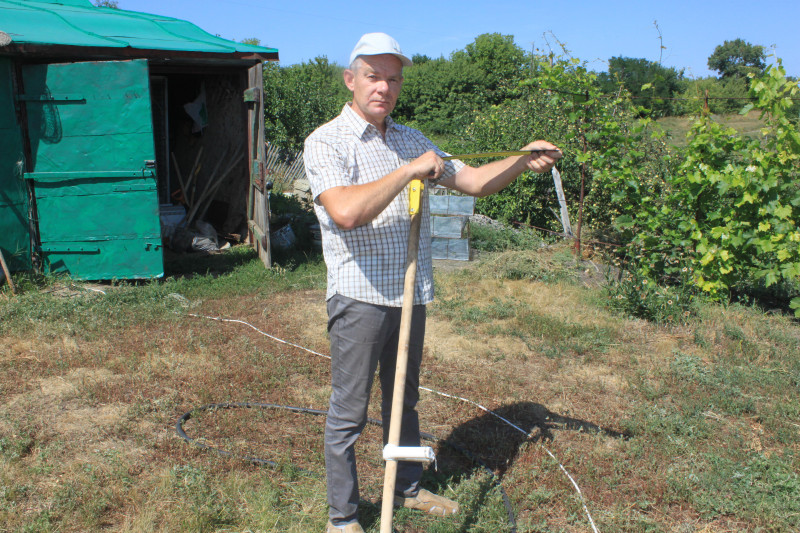 ‘An ordinary hoe does not grub all the weeds often just burying them,’ explained the inventor. ‘And my cultivator scythe demolishes everything: afterward, the mown grass is like mulch in a garden.’

Oleg Panov noted that he made the tool, one might say, out of despair:

‘I was a little over 20 years old, I came to visit my parents in the village of Kriusha in the summer. They had a garden of 40 hundred square meters planted with potatoes. Mother asked me to help weed the garden. As I went out into the field, my hands dropped. I could spend my whole vacation in the garden and still not finish weeding it! My first impulse was to pull out the grass manually - you can't deal with knee-deep weed using a hoe. But I came up with a better solution. I needed a scythe, welding, and a piece of iron. Having changed the inclination angle of the scythe, I had almost the entire garden done with in a few hours.’ 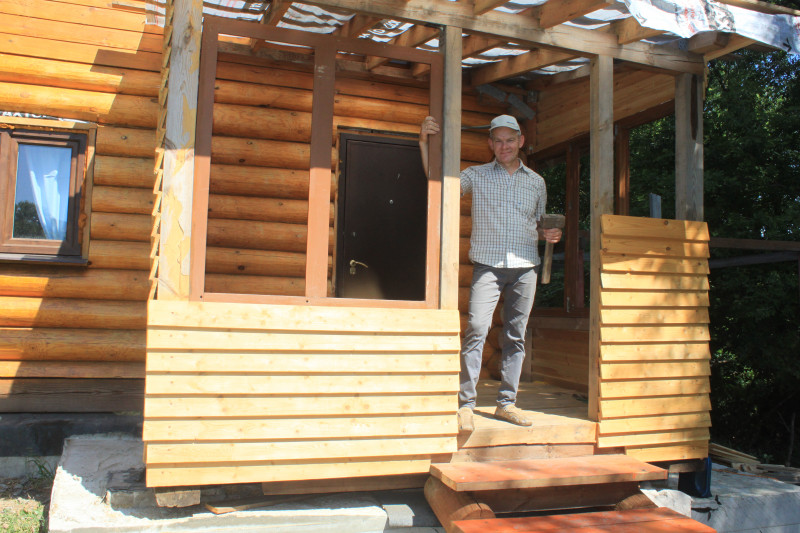 On that day, the young inventor was visited by his uncle, and Oleg wanted to boast to him, but the uncle dismissed him under the pretext of a lack of time. When, 20 years later, he personally weeded several hectares in his garden with the cultivator scythe in half an hour, he exclaimed: ‘Where have you been before!’

In seven years, the craftsman has assembled over 150 such tools.

Oleg Panov grows warm-loving southern trees using a special dimple method in which the roots of the seedlings are irrigated with water from the inside - this helps the trees withstand frosts and smell sweet in the heat. 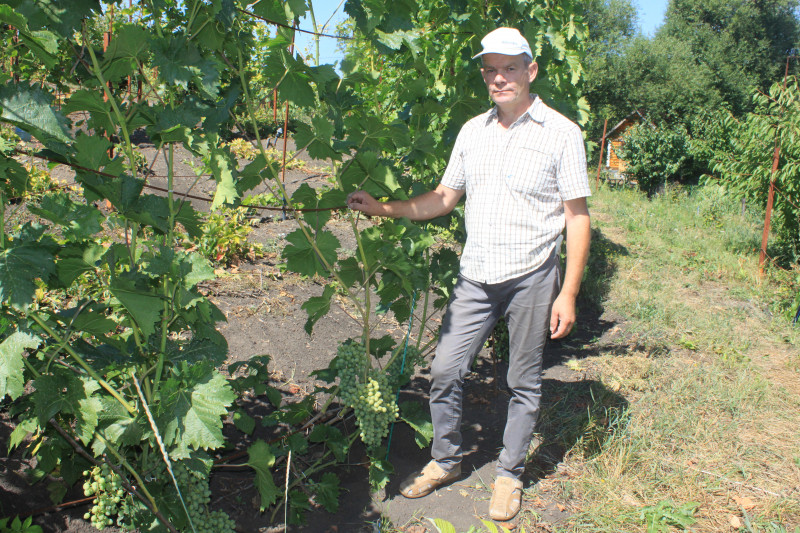 The idea to arrange a pool on his territory also came to Oleg Panov's mind when he noticed that the ground never froze in some places on the site. 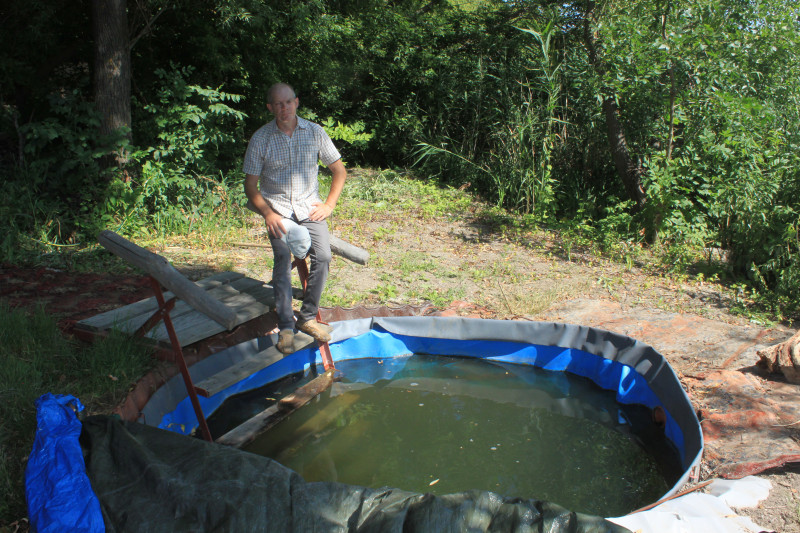 ‘I realized that there were springs here. I dug out a well and a pool with a diameter of three meters and a depth of almost two. I covered the bottom with a coating, covered it with sand. The pool quickly filled with spring water which was constantly being renewed. I installed a passage pipe through which excess water goes into the pond located next to the house. It’s so great to jump into the icy water right after a hot bath - no expensive contrast baths can be compared to it,’ the pensioner noted.

The gardener cares not only about his own lad lot. Outside the fence, outside of his territory, he planted wild apple seedlings dug out in a local meadow. In a few years, passers-by will be able to enjoy the fruits along the way. There, on the side of the road, the owner has also sowed special-quality grass to improve the territory. It is expensive, and Panov decided to sow it in holes a meter away. When the grass had grown, he used the same cultivator scythe to cut it and spread the seeds throughout the site. The grass took root, and now there is mellowy green growth instead of stones and bumps.

Oleg Alexandrovich continues to invent things necessary in everyday life. One of them is a hammock woven according to a special method. This hammock can hold up to five people. 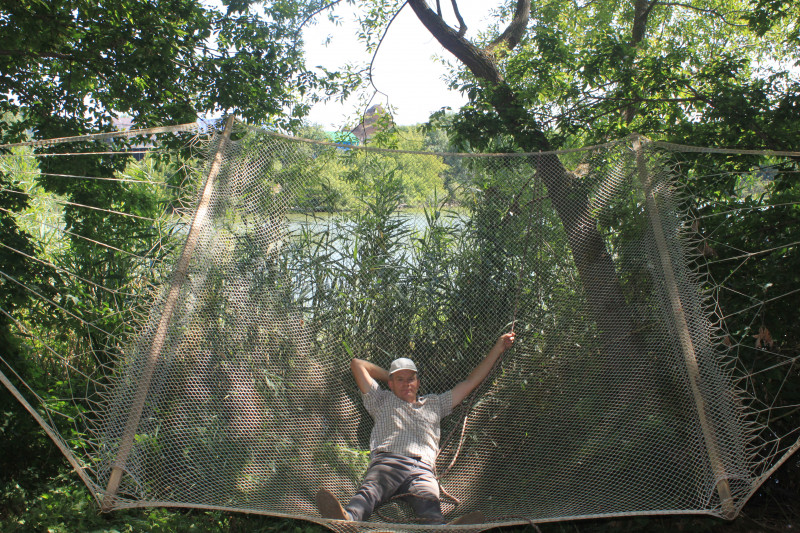