Socialist realism and Kuindzhi the Recluse. What "Treasures of Russian Museums" were brought to Voronezh 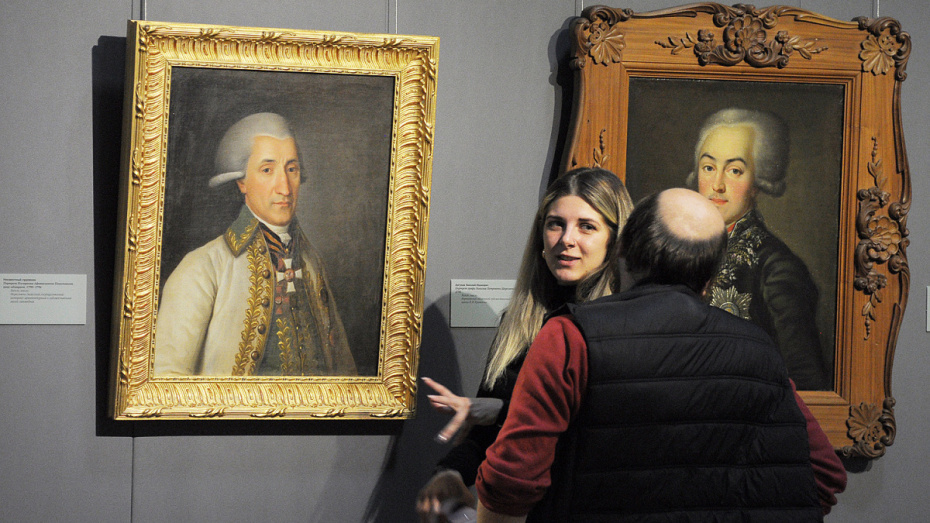 The ten most interesting paintings according to the curators of the exhibition.

The traveling exhibition “Treasures of Russian Museums” was opened at the Kramskoy Voronezh Regional Art Museum (18, Revolution Avenue) on Thursday, October 10. It will function until November 10, admission is free.

The exposition consists of more than 40 paintings from 14 regional museums of the country. Many of the paintings have never left the walls of their native provincial vaults, and the project “Treasures of Russian Museums” is their first trip. The scientific coordinator of the project Ivan Privalov told RIA Voronezh what paintings are worth visiting the exhibition.

A Letter from the Front (1947) by Aleksandr Laktionov 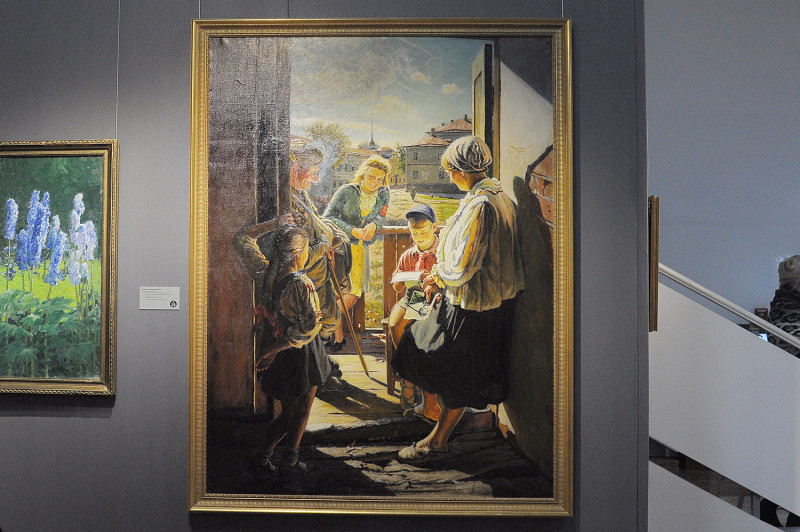 Aleksandr Laktionov is a classic of socialist realism famous for his work A Letter from the Front. The artist painted it in 1947, and already in 1948 it was acquired by the Tretyakov Gallery, and Laktionov was awarded the Stalin Prize of the first degree. Reproductions of A Letter from the Front were printed many times in the Soviet magazines “Ogoniok” (Spark), “Rabotnitsa” (The Woman Worker), and “Krestyanka” (The Woman Peasant), placed on the pages of calendars and school books and published separately in mass circulation. And in 1973, a reproduction of the painting was placed on a postage stamp of the USSR. On the wave of success, Alexander Laktionov created several author's copies of the painting. A Letter from the Front came to Voronezh from the Kaliningrad Museum.

– Of all the works of socialist realism, this is perhaps one of the most famous, but most importantly, the most soulful, – said Ivan Privalov. 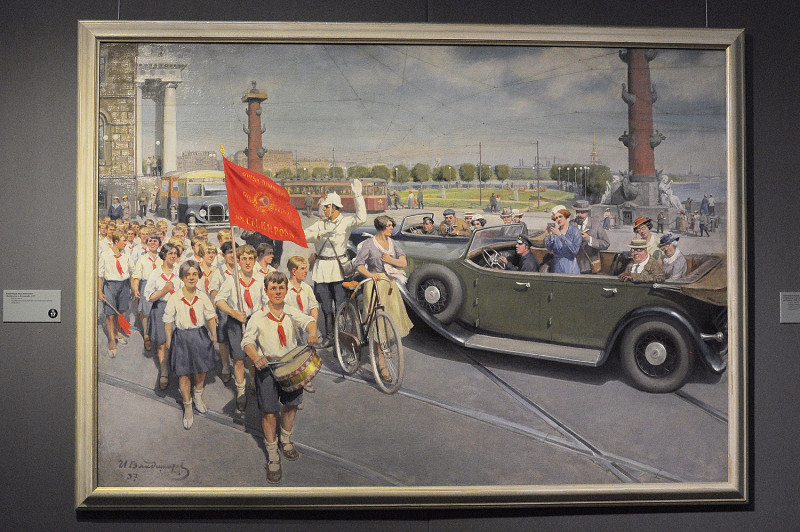 At the exhibition “Treasures of Russian Museums”, there are many paintings in the socialist realism genre. But while A Letter from the Front is its classic example, Foreign Tourists in Leningrad by Ivan Vladimirov is a little-known work stored in the funds of the State Museum and Exhibition Center ROSIZO. The large-format painting is replete with small details that are interesting to examine: the faces and outfits of foreigners who are surprised to look at the pioneers, the attributes of foreign citizens - cigars, cameras, pince-nez, as well as the faces of children and numerous figures of people in the background.

– ROSIZO is a quite enclosed structure in regards to visits by ordinary viewers, so this is a rare opportunity to see a painting from there, – said Ivan Privalov.

Running across the street (1963) by Yuri Pimenov 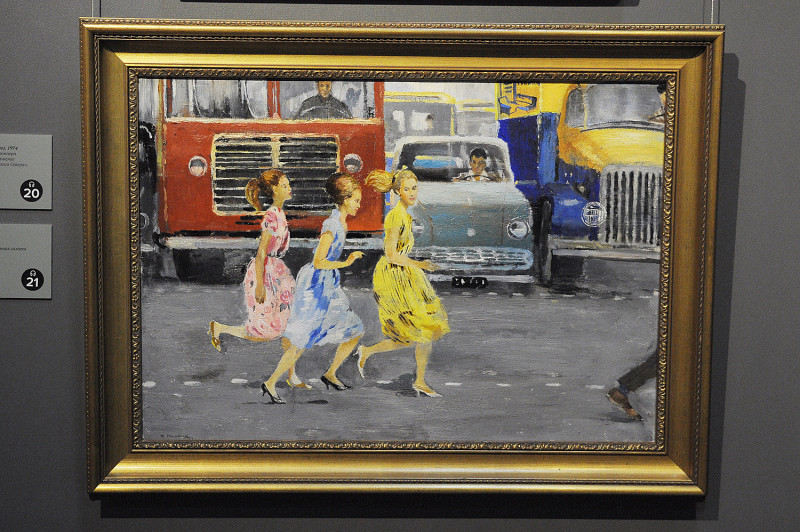 Another voice of socialist realism was Yuri Pimenov, who at the same time preserved his own specific style.

– Yuri Pimenov can be called a Russian impressionist of the XX century. He had retained a lively perception of reality throughout the entire socialist realism. Even the one hundred percent socialist-realistic plots are executed in his indistinctive manner. The most important thing to him is an attempt to capture a cheerful, optimistic, kind moment. Pimenov is primarily known for the painting New Moscow. In fact, the three most famous socialist-realist paintings are Laktionov’s A Letter from the Front, Pimenov’s New Moscow and Shurpin's The Morning of Our Homeland. These are the three pillars of socialist realism. And Running across the Street is his work of the “thaw” period, and it would be interesting for those familiar with his works from the earlier years to compare them, – said Ivan Privalov. 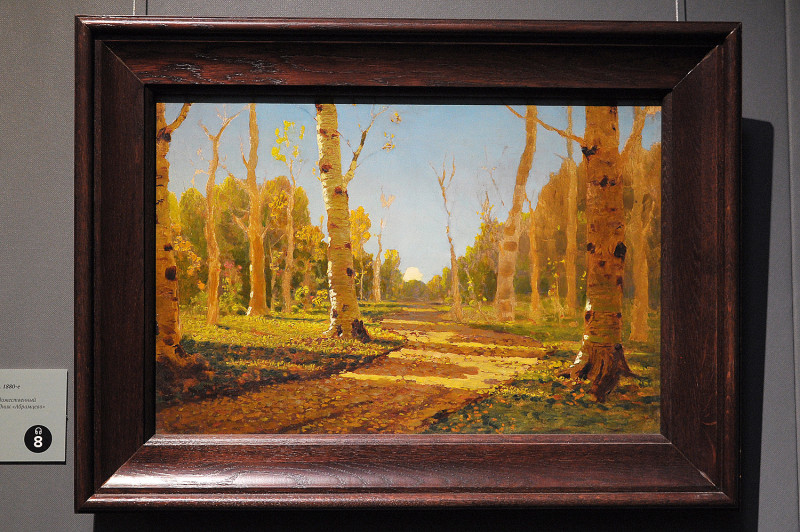 In 1882, Arkhip Kuindzhi, who at the time was at the peak of fame after the phenomenal success of the exhibition of one of his paintings Moonlit Night on the Dnieper, suddenly went into voluntary seclusion. The artist stopped exhibiting and had not communicated with anyone for 20 years.

– At that time, he experimented with paints, searched for the right pigments, solvents, worked on the primer of the canvases trying to find the most vivid, most saturated color options. During this period, he often made sketches of the same things. For example, he painted the same cloud, trying to achieve some kind of his ideal. These cloud drawings occupy literally an entire wall at retrospective exhibitions. Kuindzhi also created a great many birch groves precisely at that time, and one of them is presented at the Voronezh exhibition, – Ivan Privalov told. 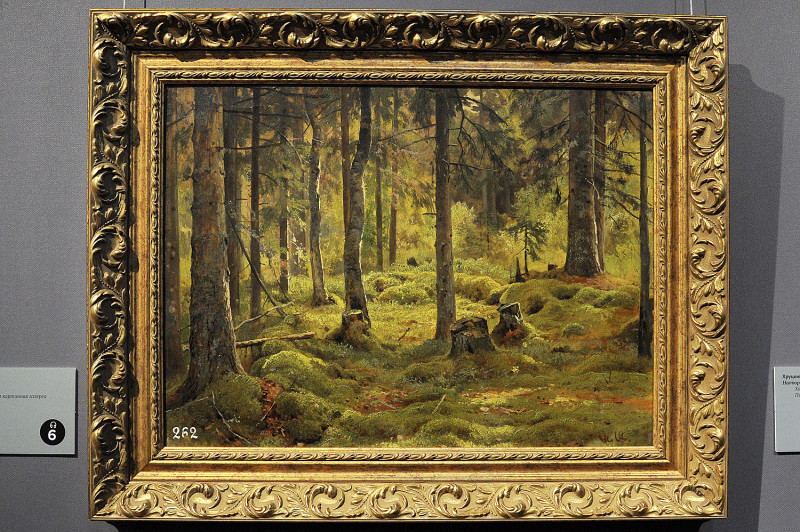 In the early period of his work, Ivan Shishkin often resorted to photography: he went outdoors, took a picture, returned home and painted the landscape from this “cheat sheet”. Later he forwent this method. Deadwood is one of the artist’s later works painted “live”, directly from nature. 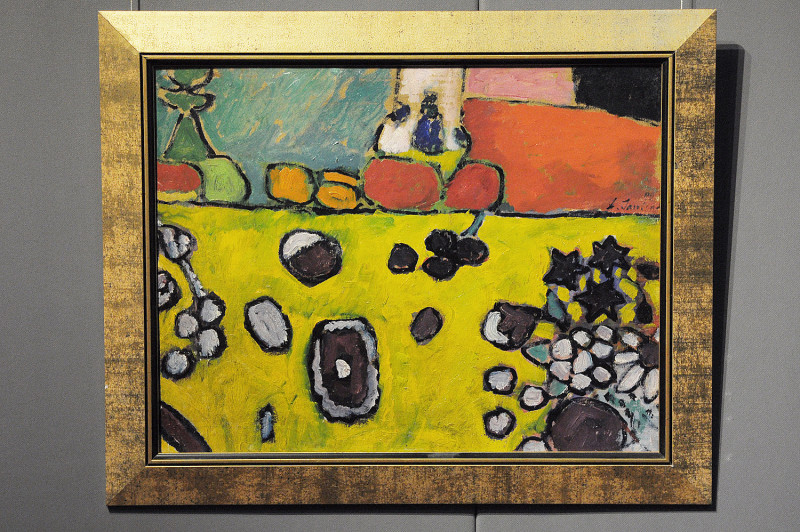 The curator of the exposition also noted that seeing Jawlensky’s painting in real life is a rarity in itself. There are extremely few works of this artist in Russia - only about 20, and those are mainly in private collections. The reason is that he immigrated to Germany, lived and exhibited there until the end of his life, so most of his works are stored in the West. In Omsk, where Still Life with Motley Tablecloth was discovered, they did not even immediately identify that this was Jawlensky’s work and wanted to hang it in a local recreation center, but then they realized how rare it was and transferred it to the local museum. 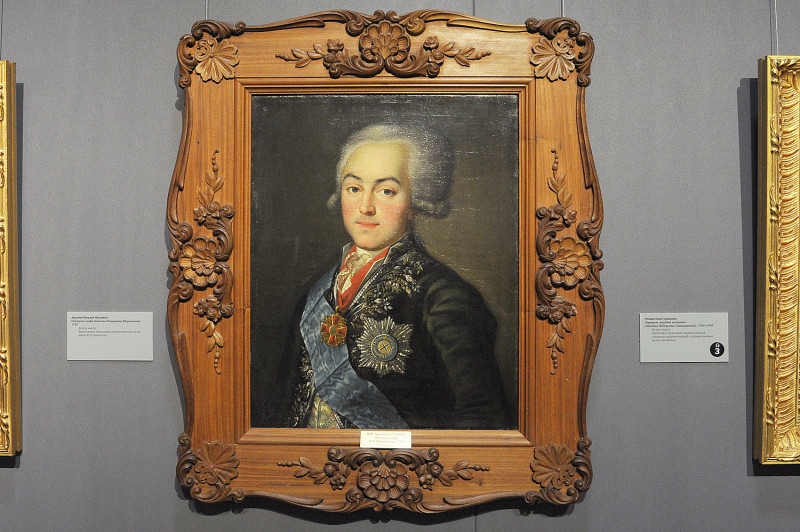 – This is a textbook thing when a serf artist painted a portrait of his master. Such works were typical for the XVIII and early XIX centuries. This is a landmark phenomenon of its era, and it is worth paying attention to, – said Ivan Privalov. 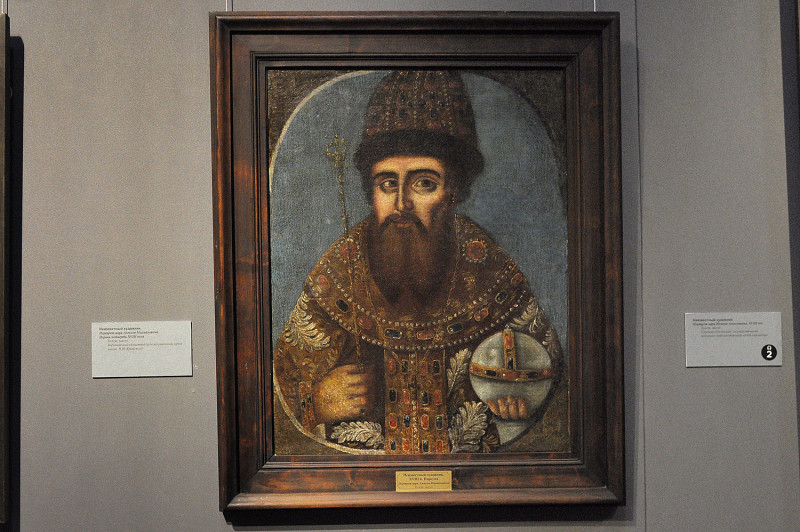 – The XVIII century is the time when numerous portraits of sovereigns of past eras were created. Many portraits of the first Romanovs have remained from that time, but they have a very typical appearance: half icon-like, half popular print. Such portraits, although there are a lot of them left, are not usually exhibited by museums. But seeing such a painting is always interesting because they are infrequent guests at the main expositions, – Ivan Privalov told.

Like Portrait of Count Sheremetev, Portrait of Tsar Aleksey Mikhailovich is from the collection of the Kramskoy Voronezh Museum. Our museum has become not only a platform for a traveling exhibition but also a direct participant in the exhibition project. In addition to the two named works, the museum provided four more paintings for the exposition including works by Ivan Kramskoy and Yelena Kiselyova.

Portrait of the Author Leonid Andreev by Ilya Repin 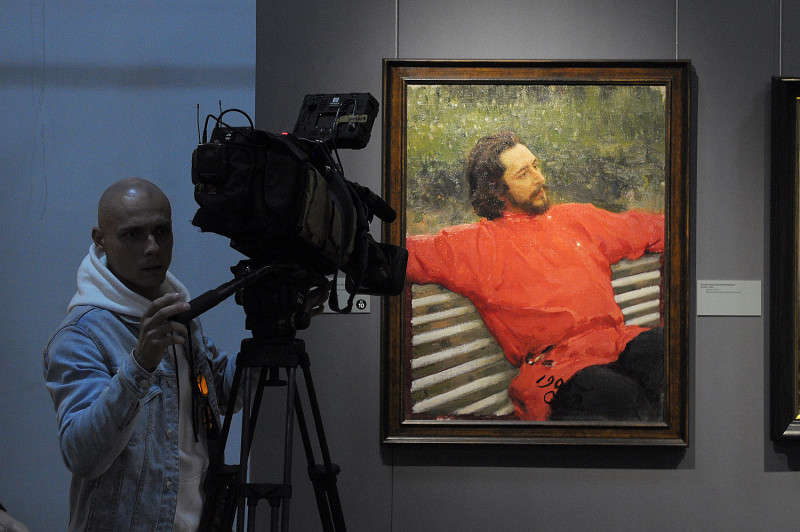 Ilya Repin created the textbook portrait of Leonid Andreev after one of the writer's most famous works, The Red Laugh, had been published.

– The writer was astounded by what was happening on the frontlines of the Russian-Japanese war, and under the influence of the horrors that occurred on the other side of the country, Andreev wrote his anti-war work The Red Laugh. Repin was clearly trying to catch the color gamut typical for Andreev's work – a combination of red and black, bloody and gloomy. He depicted Andreev with a wary, inquisitive look as if the writer was trying to see this war through the distance, – Ivan Privalov noted. 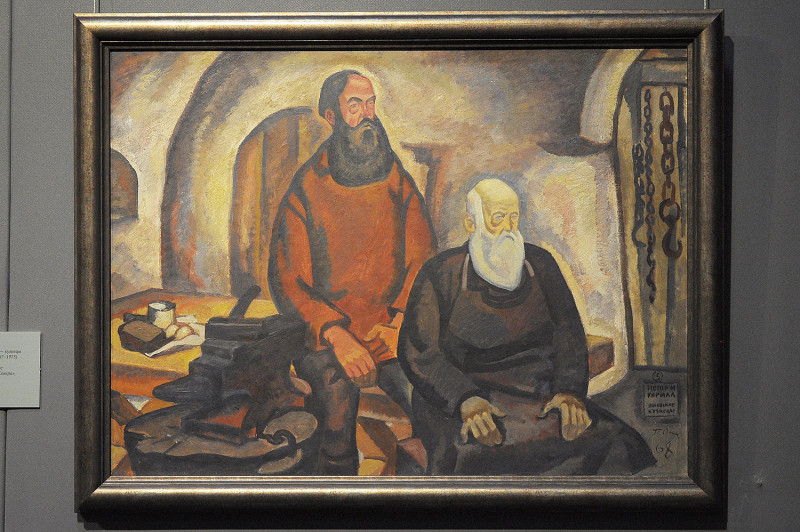 – Pyotr Ossovsky died just a few years ago. This painting belongs to the collection of the Arkhangelsk Museum, and Arkhangelsk is one of the farthest points of our country where not everyone will go, especially for a visit to a museum; so, of course, this work is interesting to see from this point of view. Pyotr Ossovsky was the founder of the so-called “tough style” and gathered artists around him with similar views: they believed that life should be portrayed without embellishment - as gloomy as it is, – said Ivan Privalov.

The traveling exhibition project “Treasures of Russian Museums” was created as part of the national “Culture” project by the Patriarchal Council for Culture with the participation of the State Tretyakov Gallery, the State Museum and Exhibition Center ROSIZO and the Proryv (Breakthrough) Foundation.

The project began with a large-scale exhibition in the Moscow Manege, which included 250 paintings from regional museums. Over the three weeks of the exhibition at the Manege, it was visited by 250 thousand people. After such unprecedented success, the project organizers decided to send the exhibition on a tour of the country. The paintings were divided into three parts, which simultaneously began a journey through eight cities of Russia. Simultaneously with Voronezh, the final exhibitions of the project opened in Astrakhan and Omsk. Earlier the expositions were opened in Kaliningrad, Tyumen, Perm, Yuzhno-Sakhalinsk, and Nizhny Novgorod. In the Russian regions, the exhibition “Treasures of Russian Museums” was attended by more than 700 thousand people.