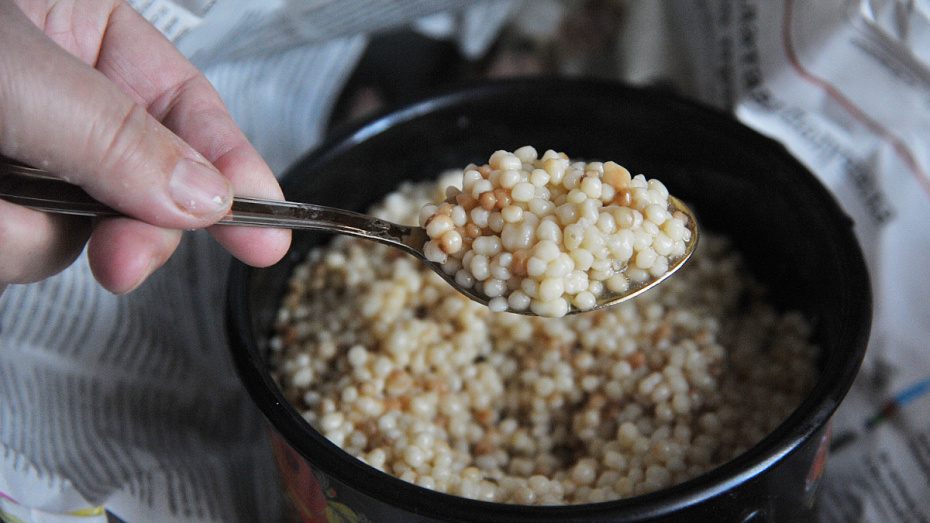 The old millet dish is cooked by the choirmaster of the rural recreation center.

Recipes rare by today's standards have not only been preserved in some families but are also often used. The RIA Voronezh portal opens a special project “Grandma’s Recipe” about food made from generation to generation. The journalists are looking for people who have preserved the old culinary traditions of a particular area of ​​the Voronezh Region. We focus on original dishes and not on the varieties of the same well-known (some put smoked lard in the borscht and some – salty lard, but these are details of one well-known dish). It is important to us not only to show the cooking technique but also to trace the succession of generations. If someone cooks unusual dishes in your village, please write to riavrn.ru@yandex.ru about it and your neighbors may become heroes of the publication.

The second issue of the special project is dedicated to katanka - a half-forgotten dish in the south-west of the Voronezh Region the cooking of which requires bearing a lot of details in mind. In simple terms, this is porridge cooked in broth. But it’s not simple millet that is used in it: at first the seeds are manually rolled into a mixture similar to batter - hence the name of the dish (in Russian, the word katanka also means rolled wire – RIA Voronezh). 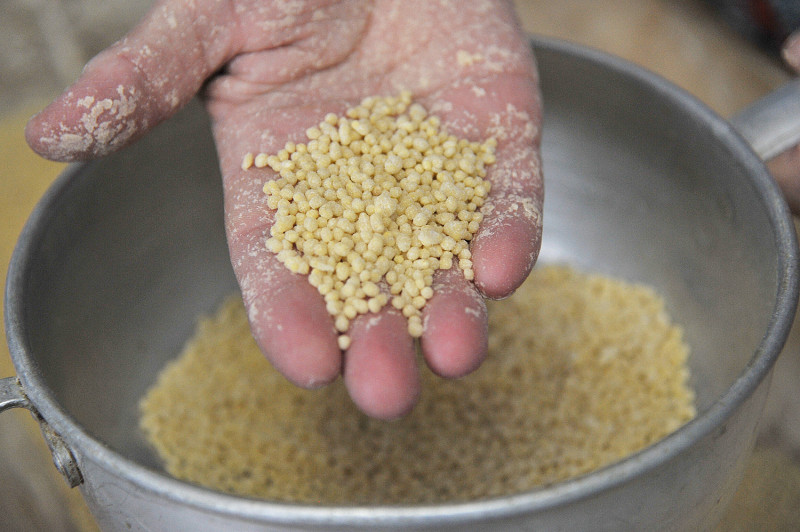 Lyubov Bykovskaya, the choir-master of a folklore ensemble in the village of Rossosh of Repyevsky District, makes katanka in a wash tub that is over 100 years old. Often the woman cooks katanka for folk festivals, and none of those who try this dish can understand what it is made from.

Through foul and fair

Katanka made by 60-year-old Lyubov Bykovskaya is known throughout the country - the woman is visited by students from Moscow and St. Petersburg as well as friends from different cities of the country. In her cozy house, the choirmaster gives master classes on cooking this forgotten dish several times a year. 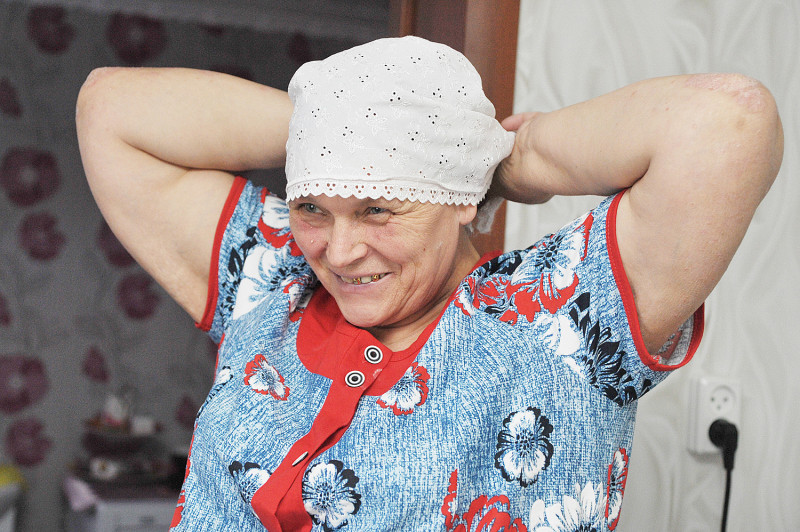 “I took a special interest in it and found out that in the entire region, katanka has long been made only here, in Rossosh, and in the village of Rogovatoe in the neighboring Belgorod Region, which is about 40 km from here. Back in the 60s and 70s of the last century, katanka was cooked in Rossosh in almost every house. This dish was not an everyday one - it was cooked on holidays and for funeral receptions. We also made katanka out of need - in those days, rural stores had only black pasta. When I was a girl, my mother Maria Ivanovna often sent me to take katanka to the Hutsuls who used to come to our village from Ukraine to harvest beets: “Bring it to them, dear, they work without rest,” recalls Lyubov Bykovskaya.

In the area, katanka was best cooked by Lyubov Mikhaylovna’s grandmother, her father’s mother Maria Petrovna Panarina. Lyuba herself showed no interest in local culinary traditions and began cooking katanka only 20 years ago.

“My mother lost her sight in 2000, and one day she turned to me: “Daughter, take me outside, I will show you how to make a true katanka.” We went outside, and she began to show it to me gropingly. Apparently, she felt that she had little time left and she had to manage to pass this craft on to me,” Lyubov Bykovskaya thinks. “In 2003, my mother died. She was a talented person: she sang ditties, often composed them herself and, of course, had a culinary gift. I myself, following my mother’s example, recently wrote a ditty about katanka:

Mother taught me since my childhood

How katanka must be rolled.

As she said, someday this dish 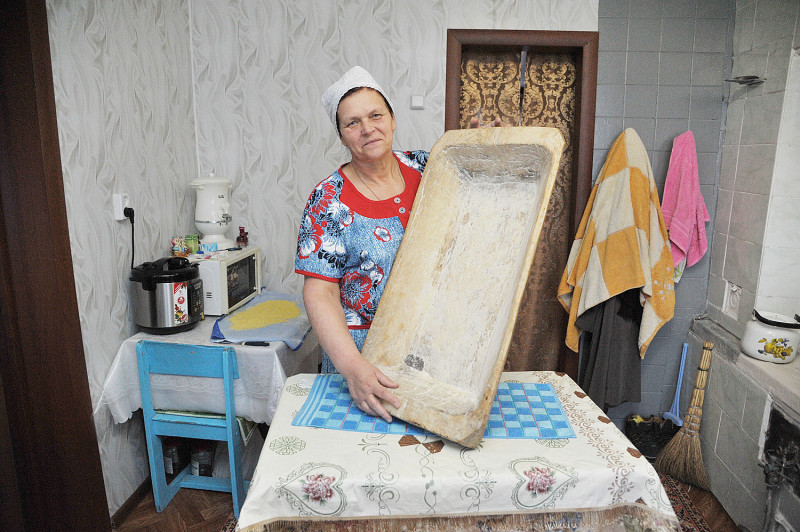 Katanka is a demanding dish. For example, to roll millet seeds in flour for several hours, you will need a washtub made of a fruit tree: an apple or pear tree. The tub used by Lyubov Mikhaylovna was made by her great-grandfather Sergei Panarin over 120 years. The washtub has cracked over time, so it is pulled together with iron brackets here and there. 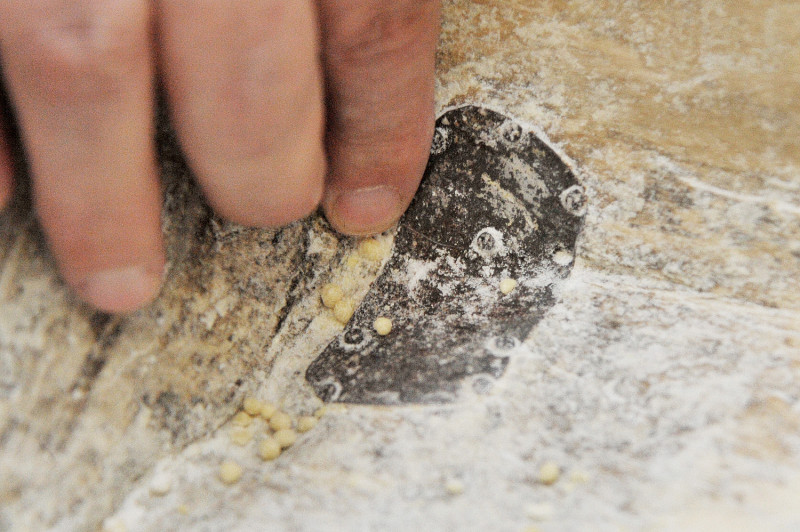 In the past, it was thought that the best device for wetting millet with a mixture of milk and eggs was goose feathers. Today they are replaced by a silicone cooking brush.

Before getting to work, millet must be sorted to exclude black kernels. The quality of flour also matters - using a poor-quality flour will result in something like stuck together dumplings that have nothing to do with the classical katanka. 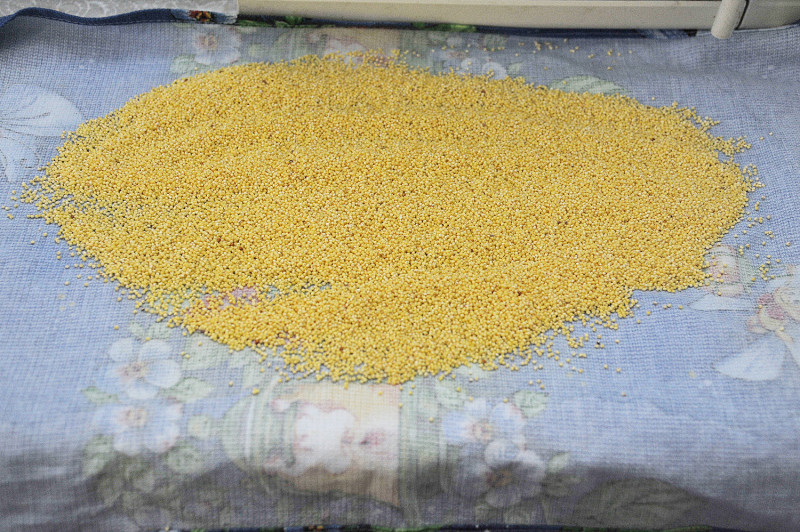 “It is always important to start the work with prayer. The mood plays a big role: if you feel unwell, it’s better not to take this work on,” the hostess advises. “It is as if katanka feels your mood and each time, depending on it, it turns out different. For me, cooking this dish is a kind of medicine - during the work, my pressure stabilizes, my tone improves, I even feel some sort of vivacity. At the same time, it’s a big exertion for the arms, and over the years, I tend to feel it more and more.”

From 2003 to 2006, Lyubov Mikhaylovna had buried three close ones. Her constant demand as a katanka specialist has to some extent helped her cope with the mental pain.

“My 22-year-old grandson Vitya is currently trying to carry my work on. He, like me, works at the recreation center and is interested in folk traditions,” said Lyubov Bykovskaya. “I teach him little by little, but you need to practice for two or three years to get the hold of it. There are details here - from the quality of millet and flour to working tools or the richness of the broth in which you put the katanka. The main thing to remember is that the broth in no case should be made from pork, lamb or beef but only from poultry. And another thing - katanka should be rolled while standing. If you are sitting in front of the wash tub, it won’t work. Katanka, as it turns out, is a lady – one has to stand bolt-upright before it!” 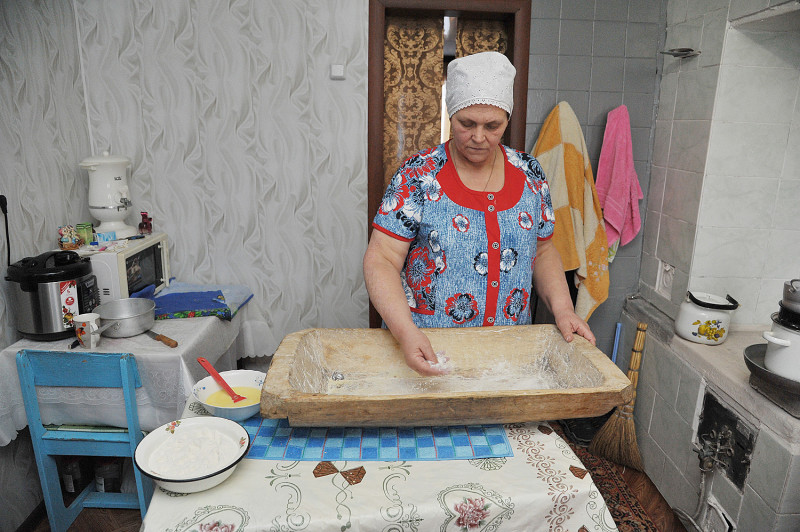 Lyubov Bykovskaya willingly shares the secrets of cooking this rare dish in social networks. Numerous penpals in Moscow, Khabarovsk, and Cheboksary are trying to make katanka using her recipe.

“I dream that as many people as possible would learn how to cook the dish of our grandmothers and mothers, which is why I reveal its secrets to everyone. As long as folk traditions are alive, the Russian village will get by,” Lyubov Bykovskaya is confident. 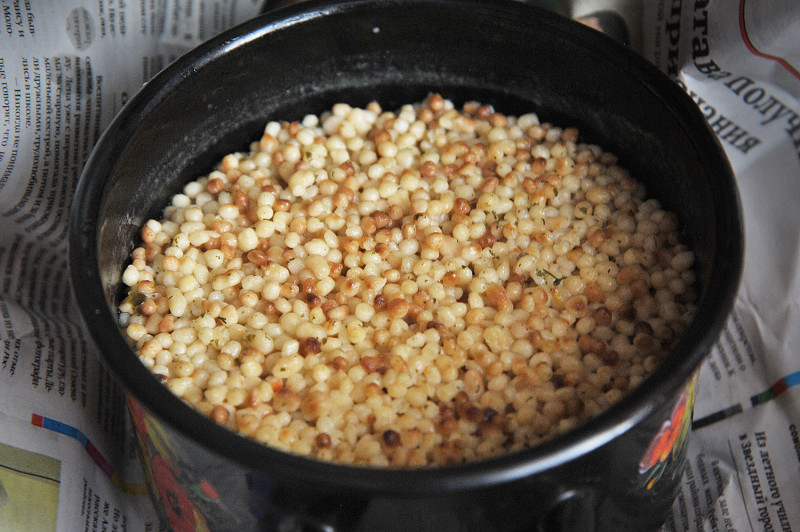 wheat flour of the highest quality – as much as the millet “takes on”;

turkey or chicken broth - about 3 liters.

Sort the millet, rinse it, and put it on a napkin for half an hour in order for it to dry. Mix milk with eggs for 10 minutes. 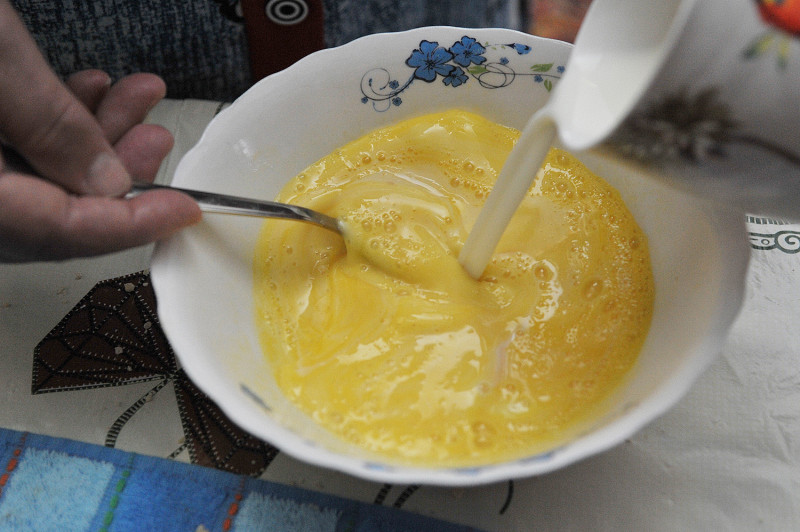 Take a wooden washtub or tray (plastic will not work since it is slick), put a little flour in it. Put dried millet on top, sprinkle everything with a mixture of milk and eggs with a silicone brush. 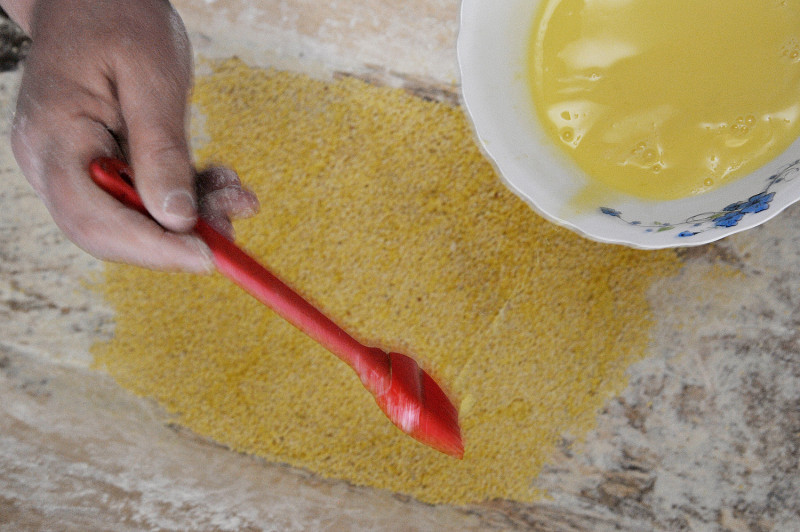 Roll the millet in the mixture with your hands so that each grain is in a shell. 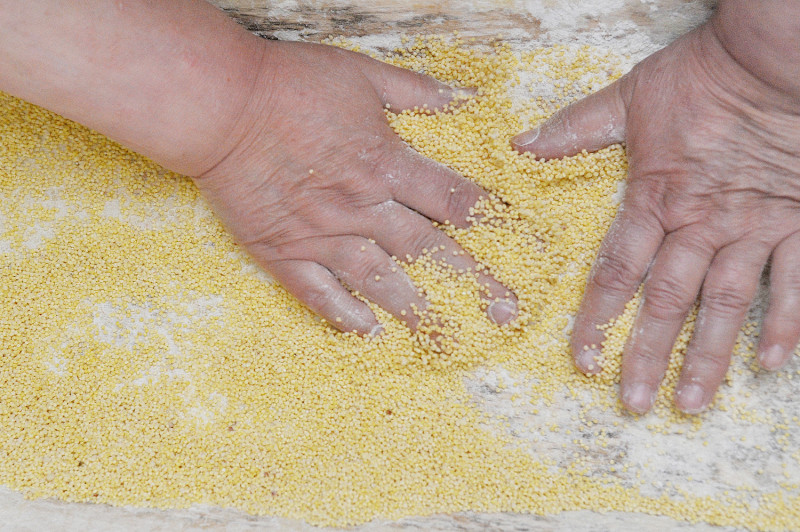 As the millet kernels increase in size, add flour to the tub and spray it again with a mixture of milk and eggs for coupling. While rolling, sift the kernels through a colander so that the largest – the already done ones - remain in it, and the small ones fall out for further rolling and growing in size. 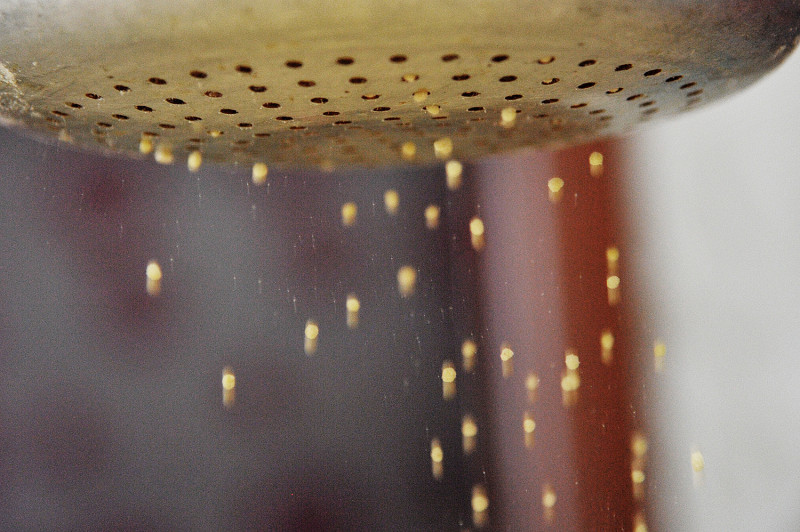 To make full-on katanka (the size of a small pea) from 250 g of millet, it must be rolled with short breaks for rest for two to three hours. After that, the balls must dry on a napkin for a day.

Next, put the katanka in a pan for 20 minutes on a small fire to finally dry it to a pale golden color. 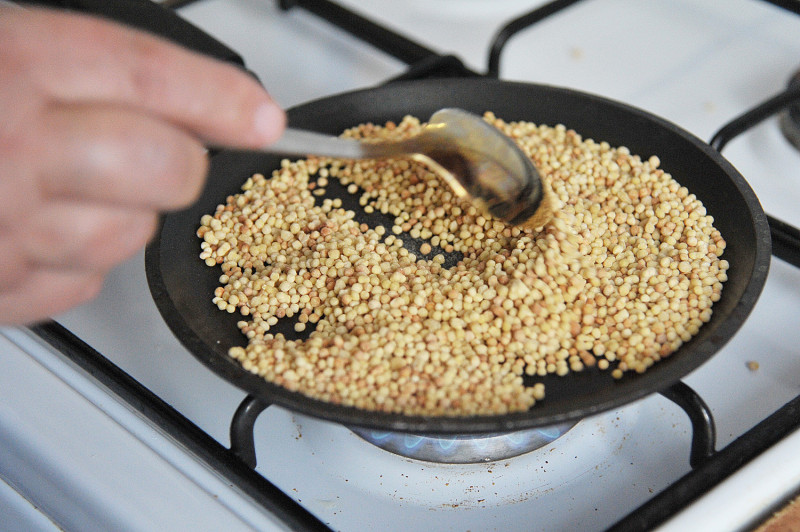 Put the finished katanka in a boiling poultry broth with a ratio of 1: 3 (3 liters of broth per 1 kg of katanka). Boil it all, stirring, for 20-25 minutes over low heat. The katanka will absorb the broth, and in the end, it will look sort like liquid porridge. You can leave pieces of poultry in the broth if you want to get a meat katanka.

Wrap the pot or the cast-iron with the finished dish in a newspaper tied on top with a scarf or blanket for two to three hours. This is necessary for the katanka to infuse before being served. 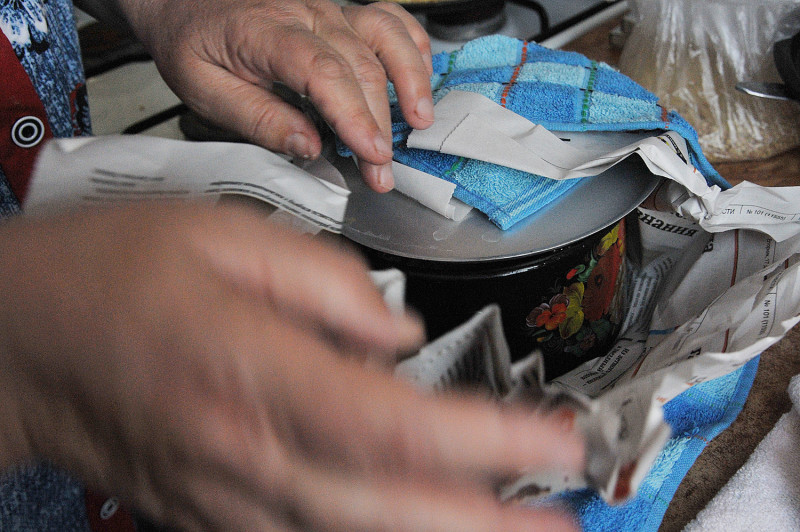