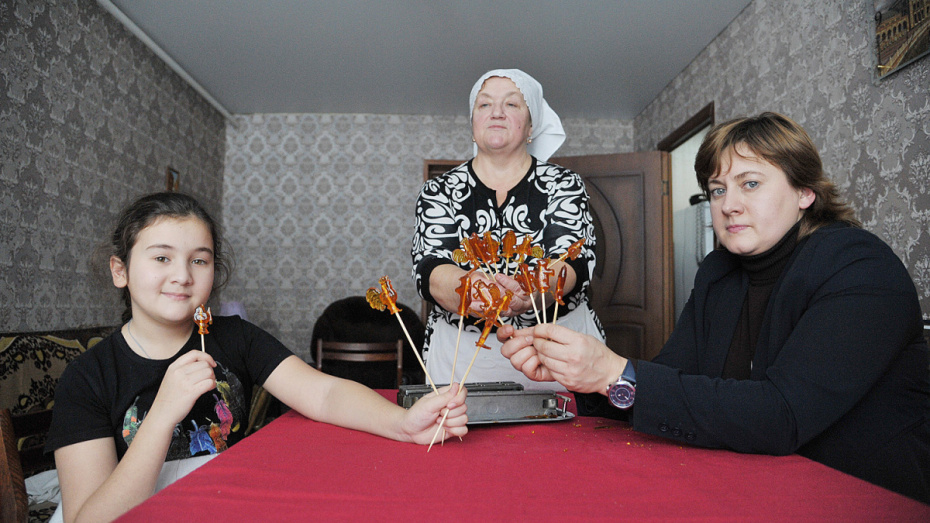 Five generations of a family have retained a food brand of the area for 120 years.

Recipes rare by today's standards have not only been preserved in some families but are also often used. The RIA Voronezh portal opens a special project "Grandmother's recipe" about food made from generation to generation. The journalists are looking for people who have preserved the old culinary traditions of a particular area of ​​the Voronezh Region. We focus on original dishes and not on the varieties of the same well-known (some put smoked lard in the borscht and some – salty lard, but these are details of one well-known dish). It is important to us not only to show the cooking technique but also to trace the succession of generations. If someone cooks unusual dishes in your village, please write to riavrn.ru@yandex.ru about it and your neighbors may become heroes of the publication.

And the first issue of the special project is dedicated to the lollipop, which has glorified the Repyevsky district throughout Russia. For 120 years, representatives of five generations of the same family have been making amber lollipops. 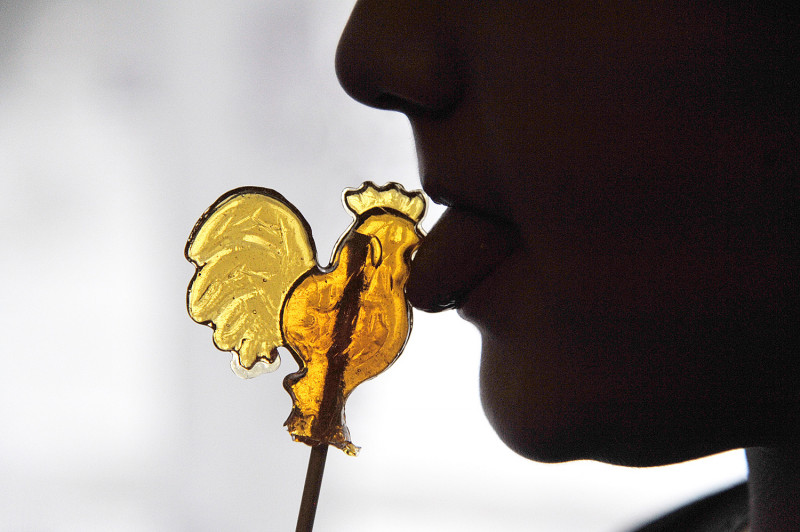 A rare tourist planning to visit Repyevsky District should remember the phrase from the comedy Operation Y and Shurik's Other Adventures: "How to get to the library?" The fact is that it is precisely the head of the district’s library network, Sofya Mukasheva and her mother, Valentina Anisimova, the head of the children's library, who to some extent are local attractions themselves. The women retained the local culinary craft related to the making of candies about which they even released a small booklet a couple of years ago.

“... the description of Nizhnedevitsky District of 1780 said that the village of Repyevka at that time had 340 households and 3813 residents. There was no trade in small counties and therefore fairs became the only place where ordinary people could buy some kind of products and new things. Sweets were in great demand, and lollipops sold especially well.”

The first mention of the Repyevka Fair dates back to 1780, so the main Repyevka brand – the lollipop - will celebrate its 240th anniversary in 2020. And this anniversary is planned to be celebrated throughout the region.

In the Anisimov - Mukashev family, lollipops are made for each holiday - New Year, Children's Day, birthdays. During the year, up to a thousand candies are made in the house for various holidays and presentations. 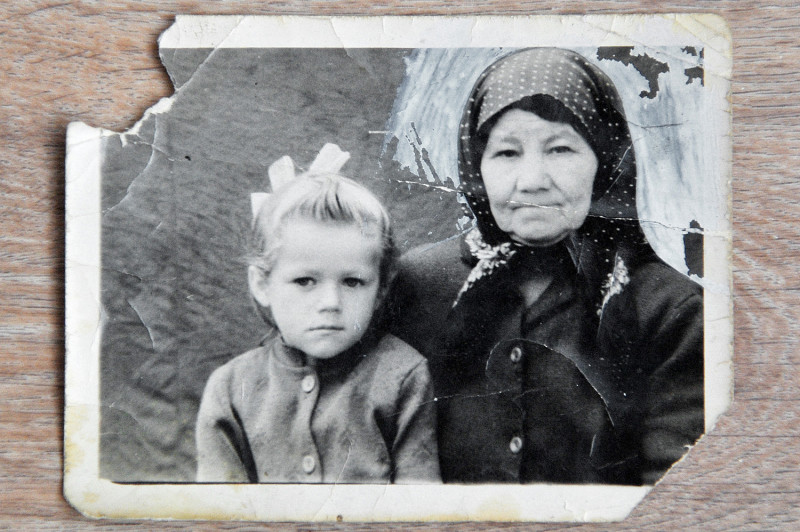 “My grandmother Anastasia Semyonovna Ivanishcheva, born in 1905, passed this craft to my mother Yevdokia Fyodorovna who passed it to me. And now I’m making lollipops with my daughter Sofya and granddaughter - fifth-grader Kira,” said Valentina Anisimova. “I remember myself as a seven-year-old, almost the same age as my granddaughter: grandmother Nastya taught me this craft at that time. At first, she reluctantly allowed me to pour heated caramel into tablespoons - there were no molds before. One of those antique silver spoons has remained with to this day. Until about the 70-80s of the past century, several families in Repyevka were engaged in this craft, and now it’s just us. 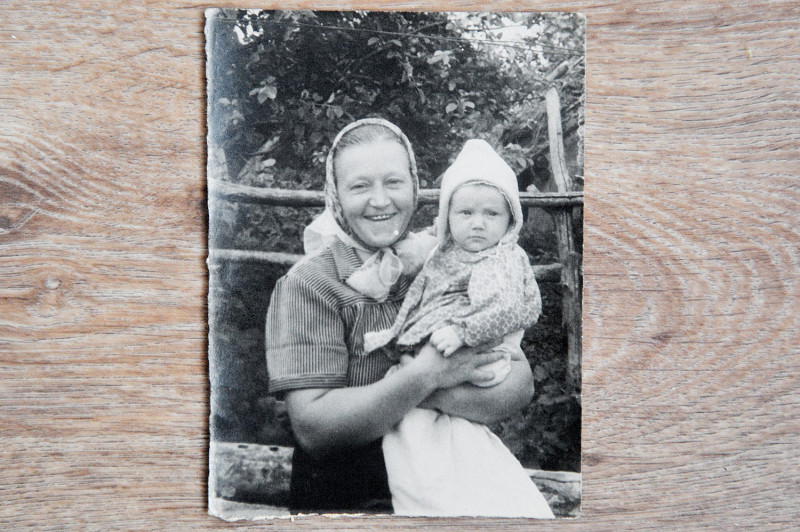 Valentina Anisimova in the arms of her mother Yevdokia Fyodorovna

“My grandmother and mother taught me how to make lollipops,” Sofya added. “And for the last five years, my mother and I have always called Kira in the kitchen when we started making them.”

Now the family uses factory-made molds, ten of them. They allow making 50 pieces of candy at a time. A kilogram of sugar results in 80 to 100 lollipops. 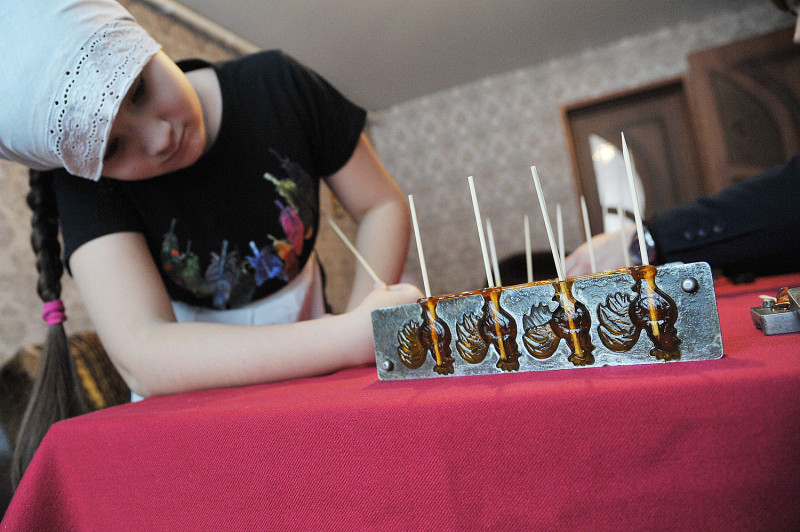 “We never add colorings or flavorings. The best color is caramel itself, which changes color depending on the time spent on the fire. Much depends on sugar the quality of which has worsened in recent years: sometimes some sort of stretching fibers appear after cooking caramel and pouring it into molds, but 15-20 years ago they weren’t there,” Valentina Anisimova noted. 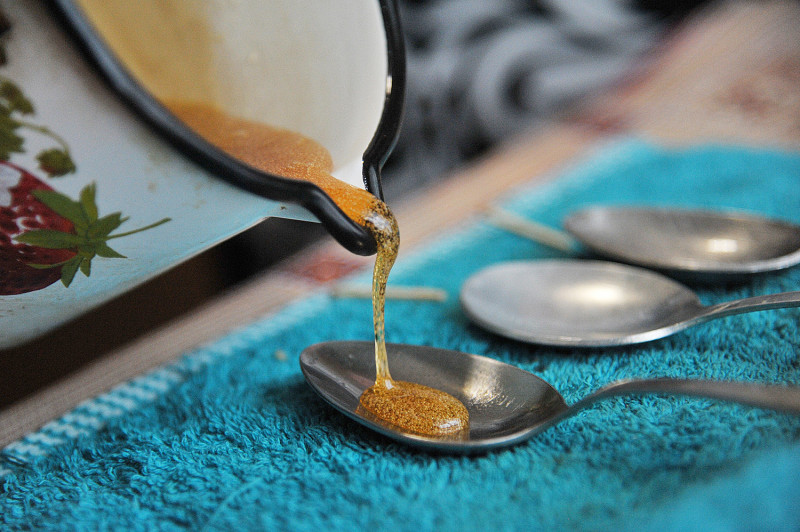 Journalists of RIA Voronezh watched the cooking of the Repyevka souvenir. In the kitchen, there were representatives of three generations of the Anisimov – Mukashev family. 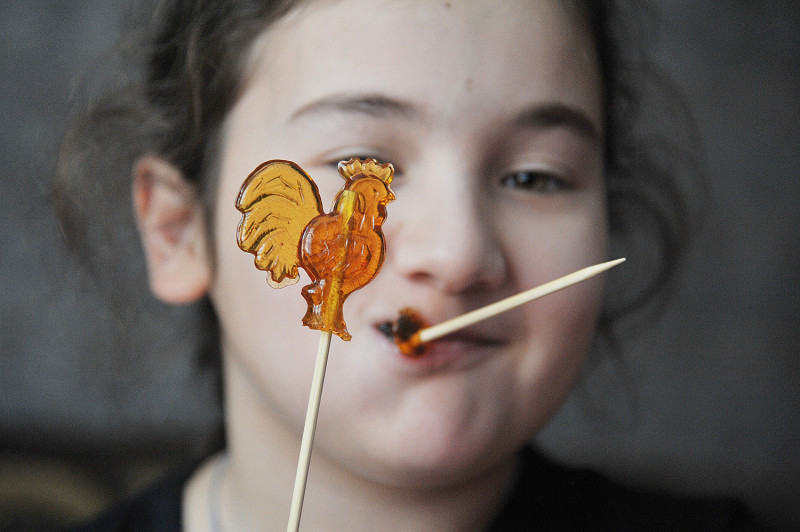 Pour 500 grams of sugar into the pan, add a little water (the water must not cover the sugar completely!), cook under high heat. Wait about 9-10 minutes – the readiness level is determined by eye. Grease the molds and put toothpicks (after cutting off the sharp ends) or cooking sticks (skewers) in them. When the caramel is taken from the pan for pouring into molds, the pan should remain on low heat. You must not turn it off completely, otherwise, the mass will harden before it is poured into the mold. The longer the caramel is cooked, the darker the candy will be. Therefore, they can be of different colors even in one batch. When the mass in the mold has cooled and hardened, the lollipops are ready.

Valentina Petrovna melted the sugar, Sofya was preparing to pour hot caramel into forms, and Kira put several tablespoons in a row, among which was the old silver one, so that the unpretentious molds that had helped the Repyevka residents make candy for two centuries in a row were at hand. 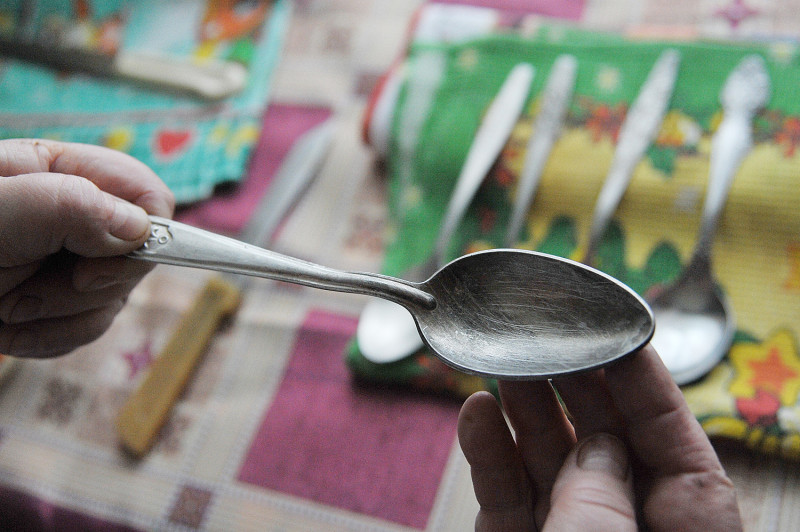 “My grandmother told me to insert sticks,” Kira explained. “She said that all the spoons should lie flat next to each other.” The first lollipops were oval in the shape of the spoons. 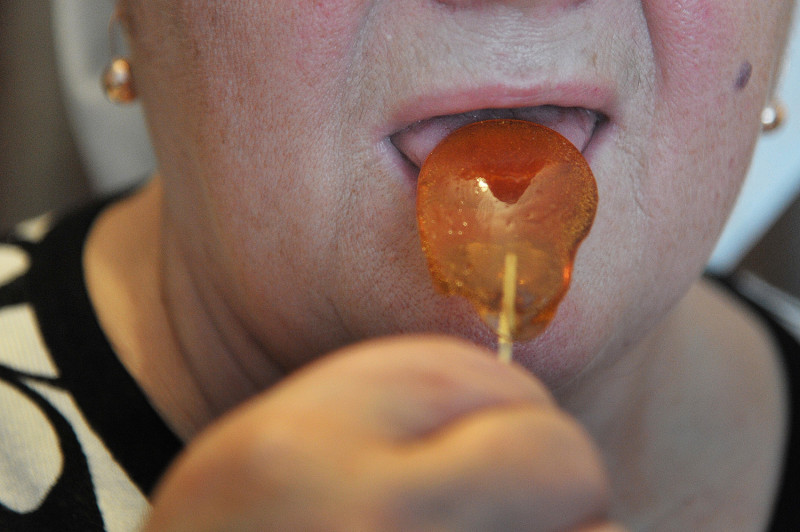 And then came the turn of the factory-made molds. 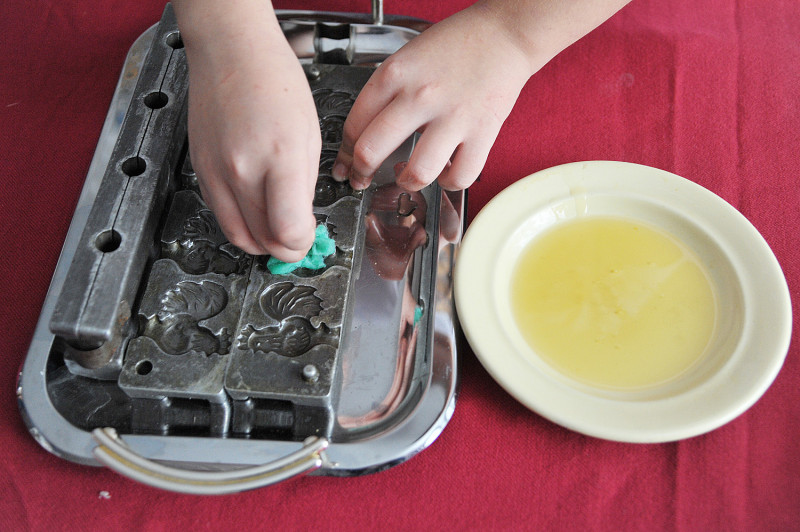 After melting the sugar over a fire in a large saucepan, Valentina Anisimova poured its contents into an enameled mug with a spout to make it easier to pour caramel into the narrow holes of the forms. 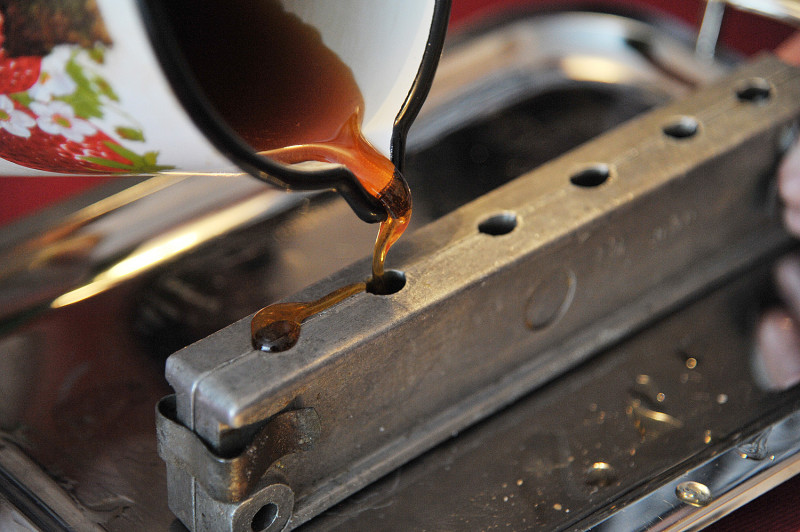 “For us, this process is always an event. About two to three times a month we make lollipops for the holidays, presentations, and send them to relatives and friends. We do not sell them, we do it only for ourselves and our loved ones,” Sofya Mukasheva stressed. 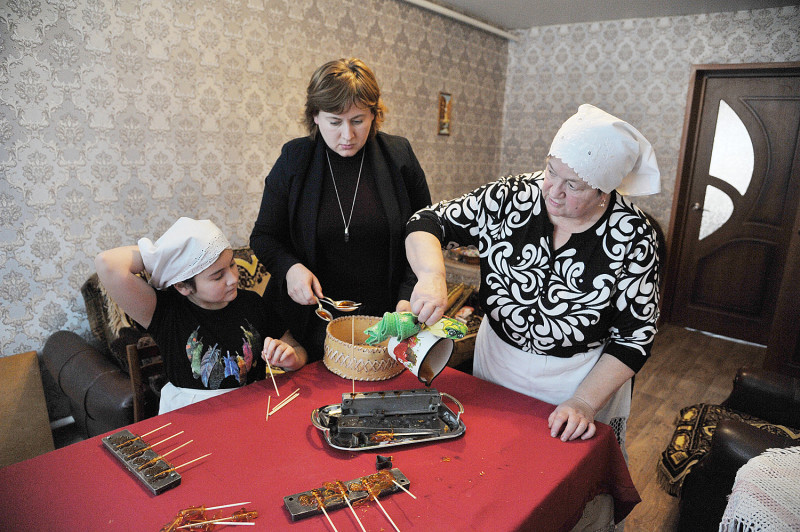 Prior to the New Year, employees of the district library network prepared a program for young readers. Children wrote letters to Ded Moroz and brought them to the children's library. And Ded Moroz handed each author of such a letter a booklet on the history of the Repyevka lollipop with a cock or squirrel prepared by Valentina, Sofya and Kira pinned to it. 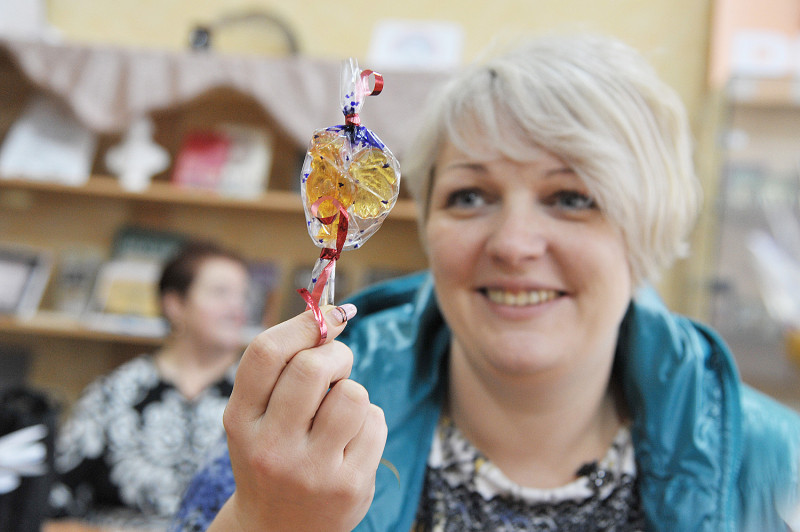