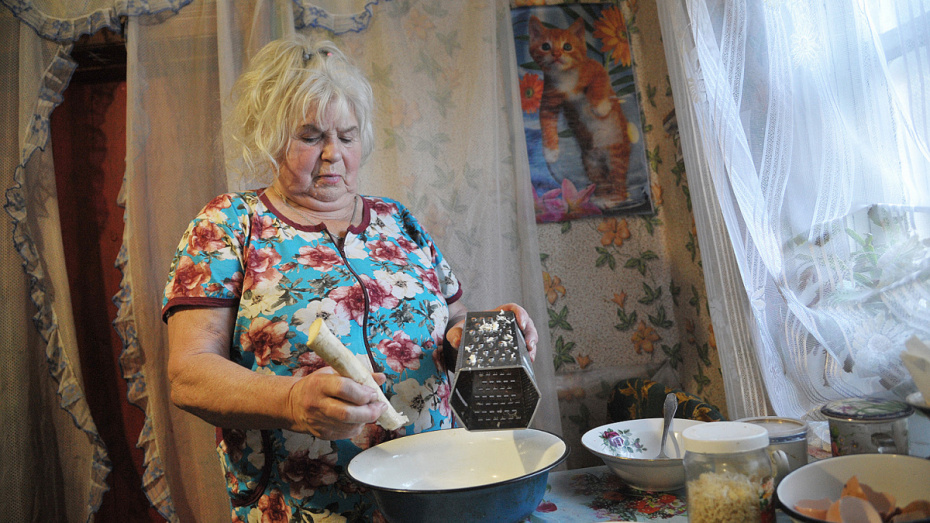 The ancient ways of preparing for Maslenitsa in Povorinsky and Nizhnedevitsky districts.

RIA Voronezh continues the special project Grandmother's Recipe. The journalists are looking for people who have preserved the old culinary traditions of a particular area of the Voronezh Region. It is important to us not only to show the cooking technique but also to trace the succession of generations.

The third issue of the special project is dedicated to Maslenitsa dishes. In the east of the Voronezh Region, in Povorinsky District, there are preserved recipes for a pancake sauce with horseradish and egg filling. And in the north-west of the region, in Nizhnedevitsky District, they have long been making 3-5-centimeter-thick pancakes remotely resembling pudding.

Tamara Sapronova from the village of Oktyabrskoe in Povorinsky District and her family celebrate Maslenitsa with pancakes with horseradish and eggs every year. 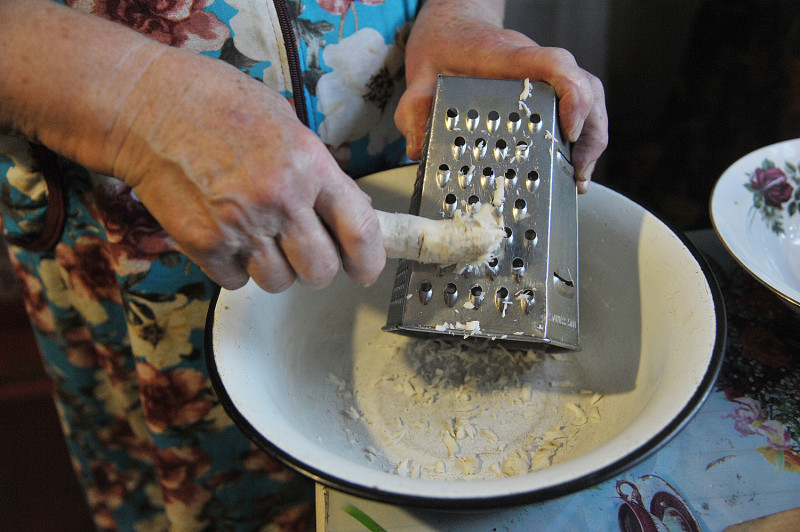 “I travel a lot for work, and when I start talking about our pancakes with horseradish, people think that I'm kidding,” said Vladimir, the son of Tamara Sapronova. “And when I describe this simple recipe, they start writing it down to try it at home. Having tasted such pancakes, they call and thank me. Recently, for example, I got a call from Siberia.” 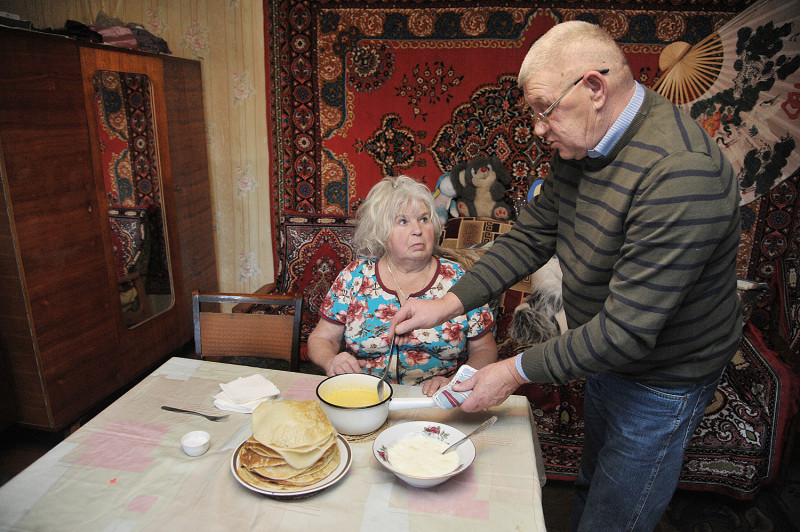 Tamara Ivanovna herself was born in the Kemerovo Region, in a family with six children. She graduated from a medical school and in the late 1950s she ended up in Povorinsky District - in the native land of her husband Victor Ivanovich. She learned to set up housekeeping under the guidance of her mother-in-law Vera Ilyinichna.

“In Siberia, I didn’t even try to cook – I had more important things to think about as a girl. And then family life began, and Vera Ilyinichna for the first time showed me how to make pancakes in a Russian stove. In those years, there were over 5 thousand people living here in Oktyabrsky, and on Maslenitsa, many treated themselves to pancakes with horseradish or eggs,” the 81-year-old woman recalls. 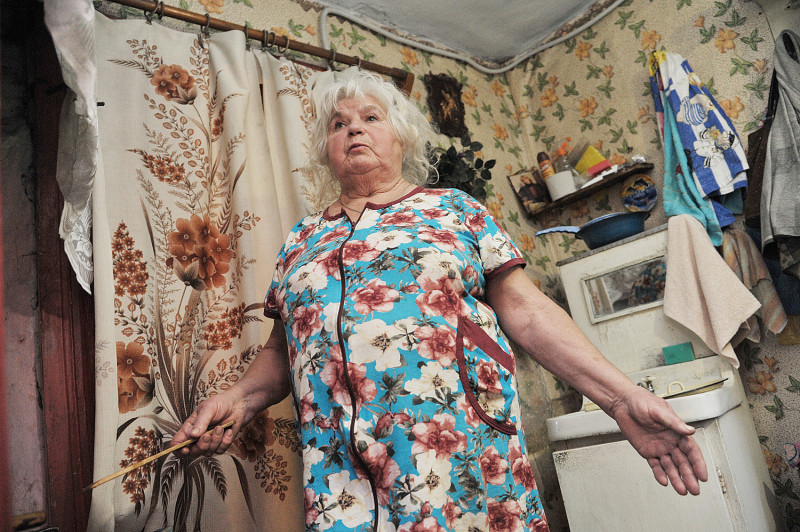 She considers a village stove an important attribute of baking pancakes. The stove in Tamara Sapronova’s house is 60-70 years old just as the cast-iron frying pan - everything was inherited from the mother-in-law. 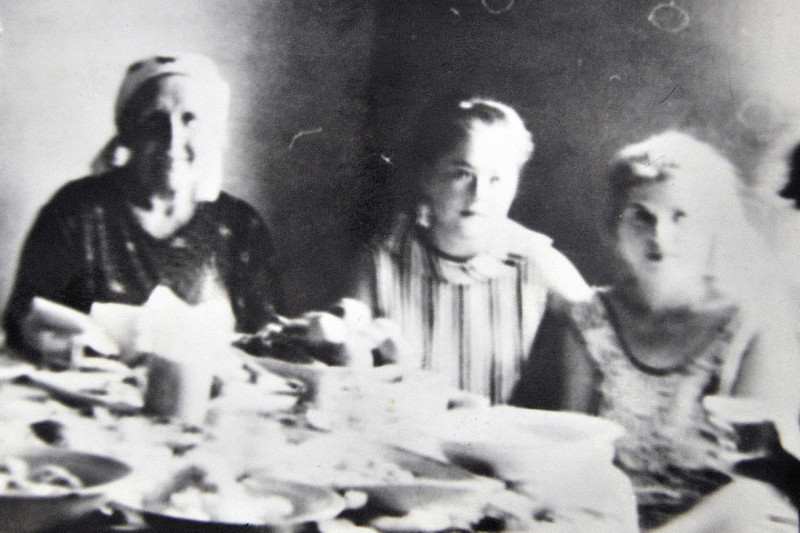 Vera Ilinichna is on the left

“I prepared the dough for pancakes in advance,” said the hostess. “15-20 years ago, flour, of course, was better. But the cast-iron frying pan and stove will help us fix all of its shortcomings.” 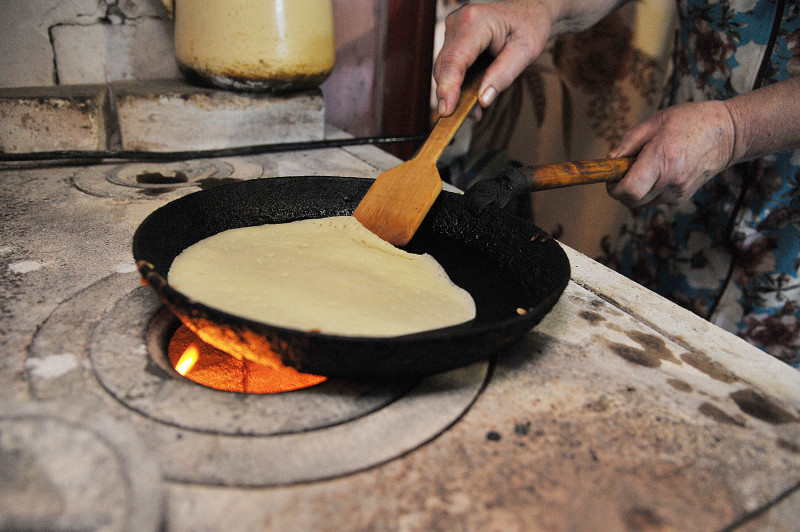 While frying pancakes, the mother grated horseradish, sweetened it and seasoned it with kvass. 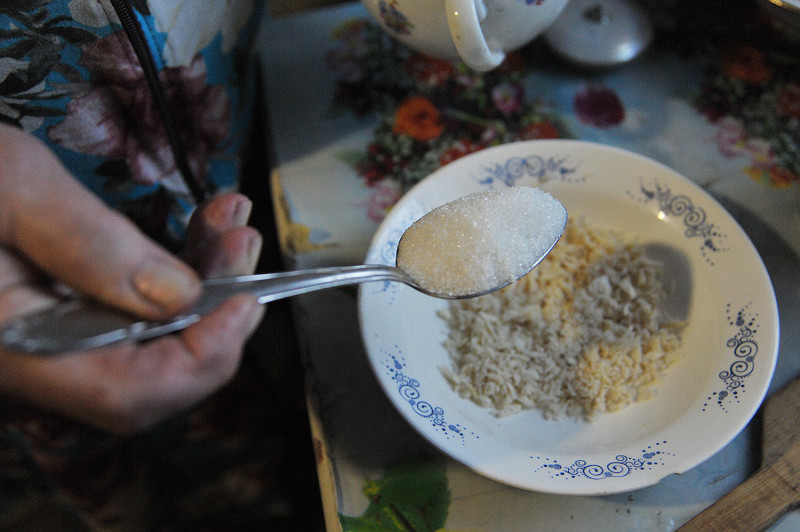 At the same time, Vladimir was busy with egg filling for pancakes. When the pile of pancakes had grown, Tamara Ivanovna said: 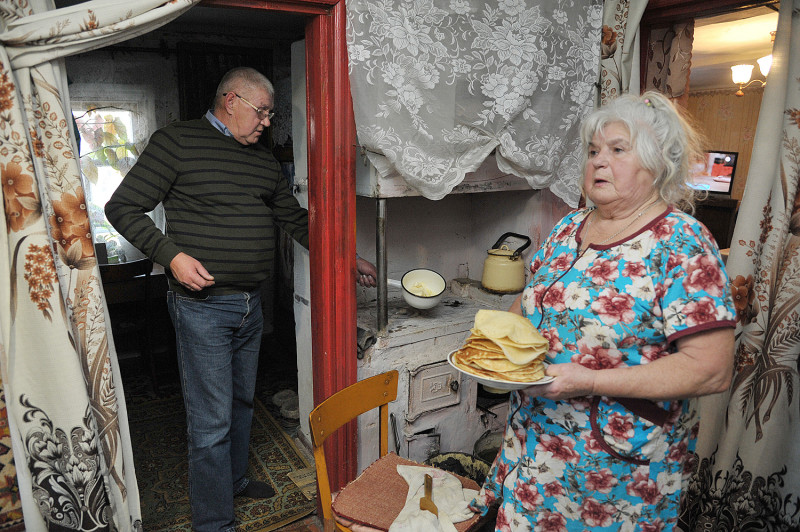 Tamara Sapronova and her son began to try the pancakes dipping them in the sauce. Soon, liquid egg filling was also ready. So the pancakes were partially eaten with horseradish and the rest was used to wrap in the contents of the second cup. Pancakes with eggs should be eaten over a plate so that the filling does not leak onto the table. 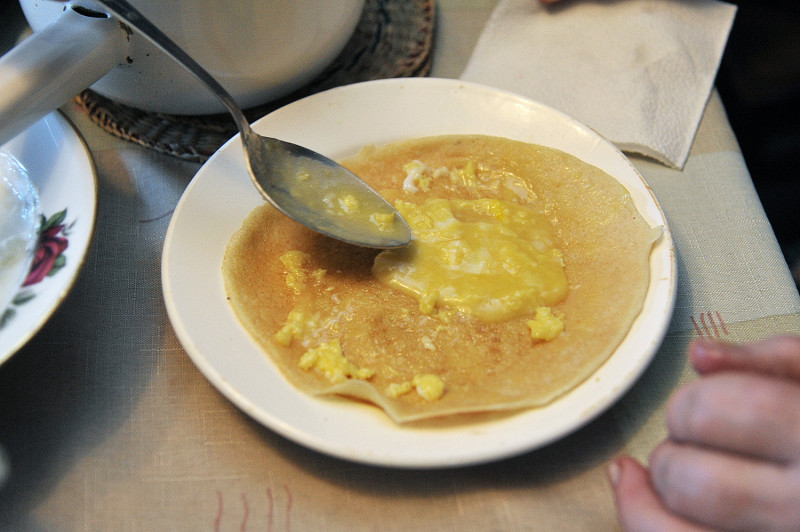 RIA Voronezh journalists also tried both dishes - hot pancakes with horseradish had an unusual taste, in which the spiciness of horseradish was in surprising combination with sweet pancakes.

“The only bad thing is that this recipe is almost dead today. People bake pancakes, but they are empty, without any filling,” Tamara Sapronova complained.

She taught her daughter-in-law Olga how to serve pancakes particularly with horseradish and eggs.

“My wife sometimes cooks pancakes this way, it turns out great. But my two daughters are not very interested,” Vladimir is worried. 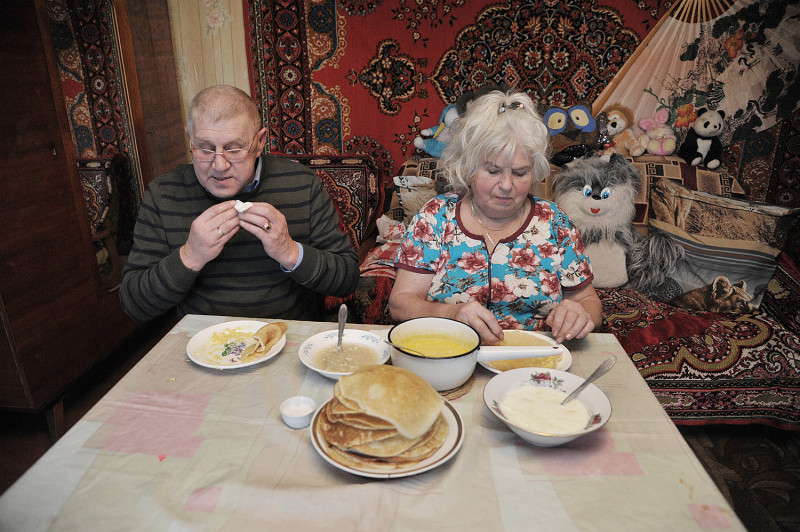 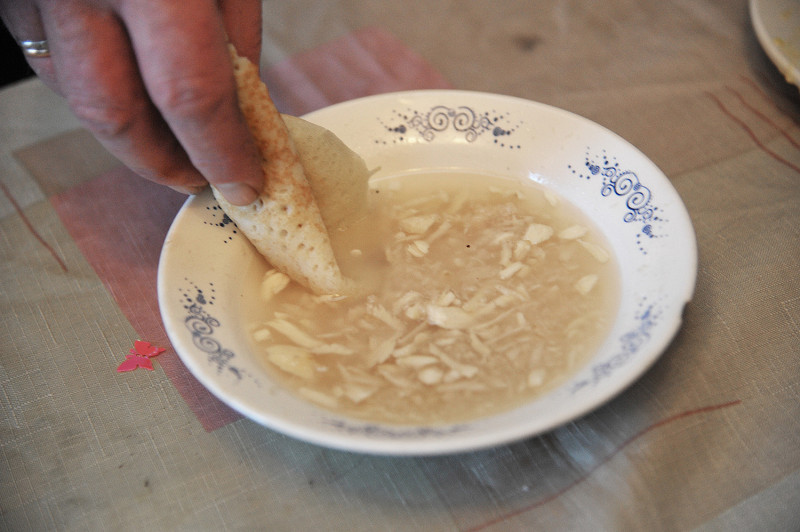 Wash, peel and grate the horseradish on a medium grater. Pour sugar in a deep dish with horseradish and add kvass to completely cover the pulp. Stir everything thoroughly. Fans of spicy food can add pepper or mustard. The hot pancakes must be rolled and dipped into the resulting sauce.

Pancakes with eggs and butter 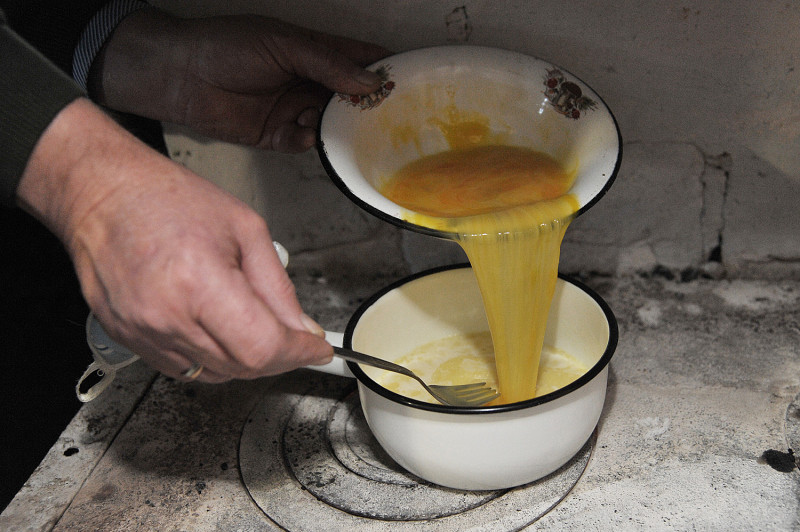 Melt the butter in a saucepan on a stove. Break the eggs into a separate deep bowl and stir thoroughly. Mix the egg mixture with melted butter until the texture is smooth. Seasonings can be added to your liking. Spoon the filling in the middle of the pancake and wrap it.

In Nizhnedevitsky District, the pancake tradition is associated not with the filling but with the form. In the village of Nizhneye Turovo, they have long been making 3-5-centimeter-thick pancakes. 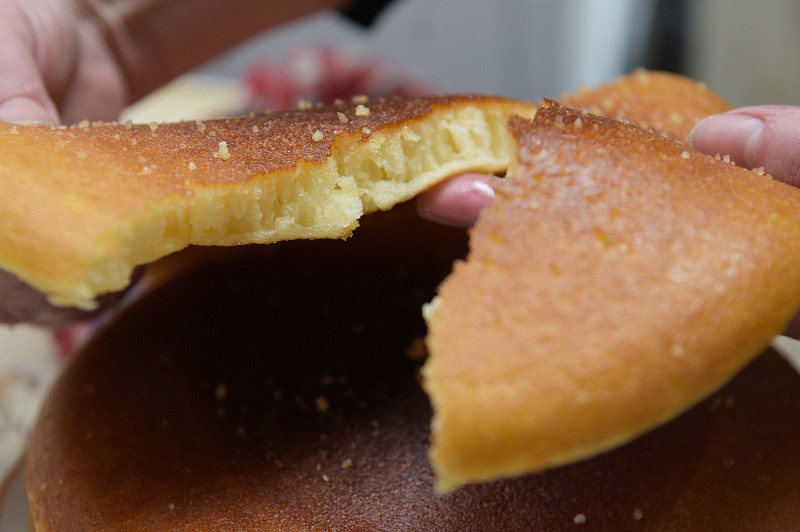 “This is a local brand. In the 1970-1980s, such pancakes were baked in almost every house,” the head of the Verkhneturovsky rural settlement Natalya Budaeva assured.

She led journalists to her fellow villager Olga Rykunova who began baking pancakes from a dough partially prepared in advance:

“I learned this recipe about 15 years ago, it was shown to me by a colleague. In such pancakes, the most important ingredient is semolina. It is semolina that makes the thick pancakes a bit like a cupcake or pudding. Because of the semolina, the dough is so thick that it will not work for ordinary thin pancakes. I bake such pancakes every weekend: I have three daughters, they have their own families, so I always need to bake with enough to spare. On Maslenitsa, I bake both ordinary thin pancakes and our branded thick ones!” 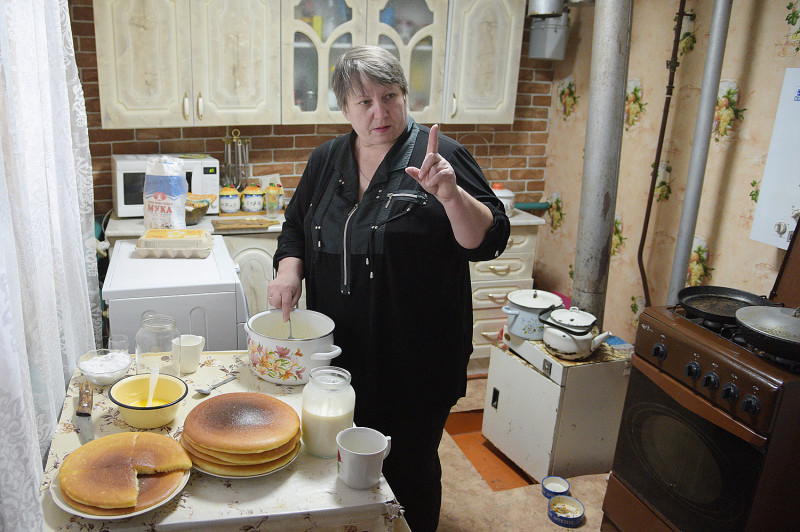 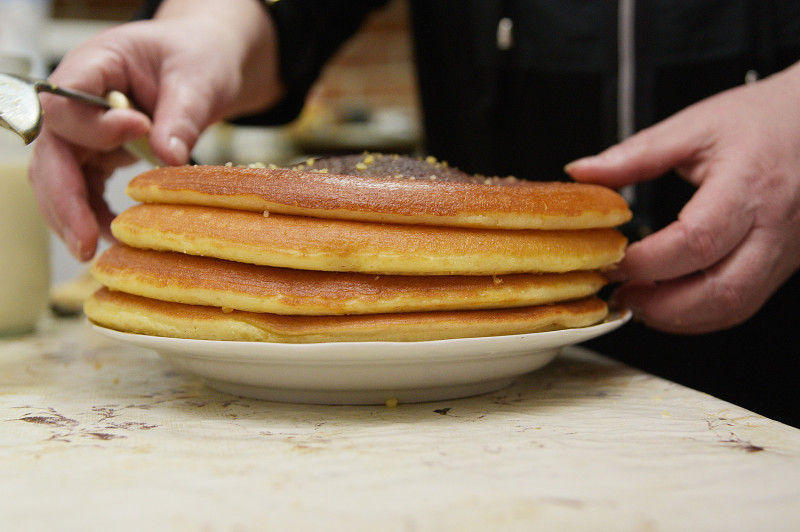 Pour milk into a deep container, pour semolina, mix them and put a warm place for two hours. Then add half the prepared sugar (150-200 g), salt, flour, yeast. Knead the dough and leave it to rise. The risen dough must be lowered (squeezed into the pan) with a spoon at least three times. It usually takes an hour and a half. 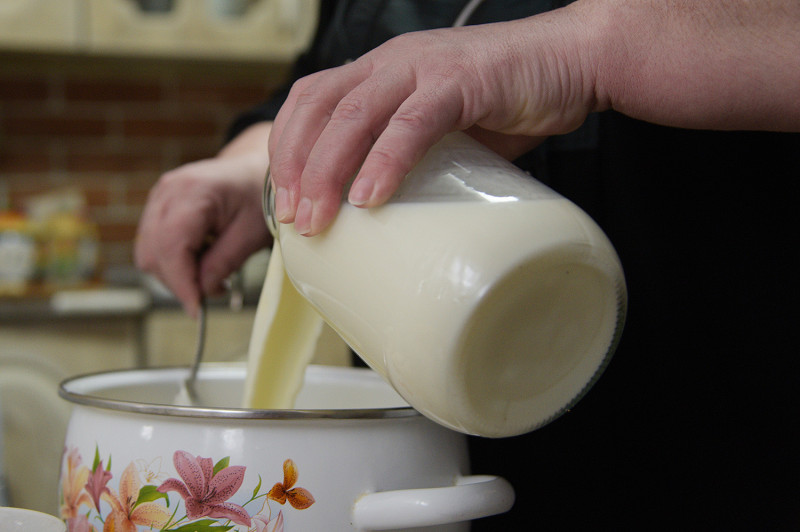 When the dough rises the third time, add the remaining sugar, baking powder, vanillin, mixed eggs, baking soda, vinegar. Mix everything with your hands. Heat the pan with sunflower oil, pour enough dough it in for the pancakes to be 3-5 cm thick. Fry the pancakes over low heat adding oil into the pan. 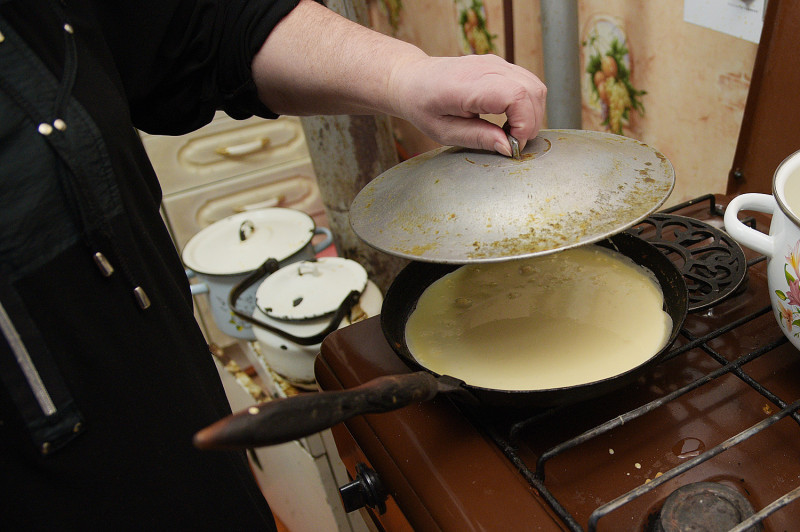 Grease the finished pancakes with butter. 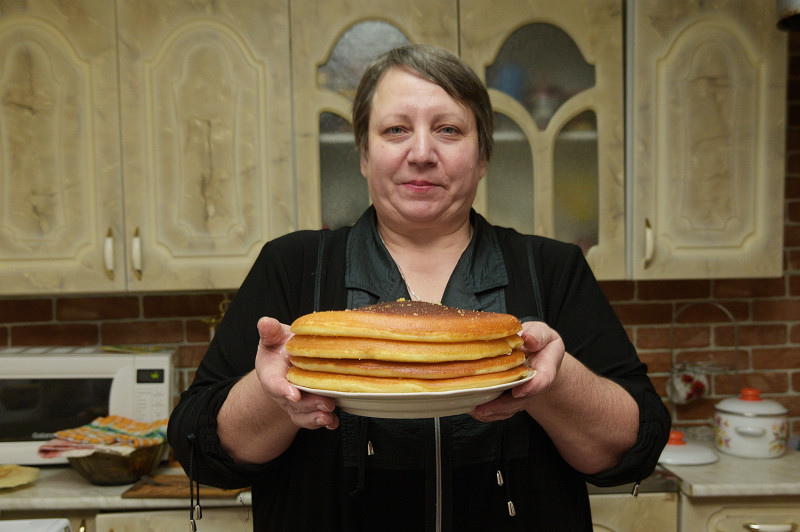 If someone cooks unusual dishes in your village, please write to riavrn.ru@yandex.ru about it. Your neighbors may become the heroes of the next publication of the special project Grandma’s Recipe.