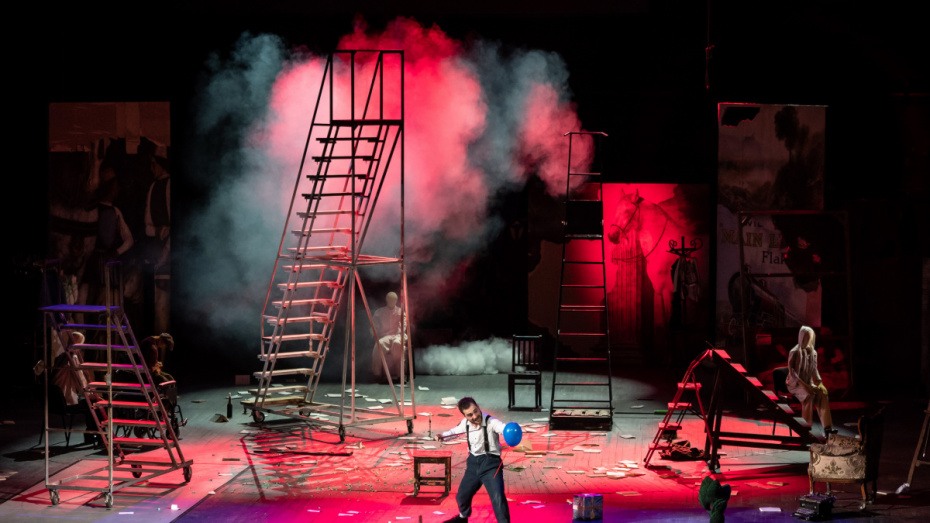 The play Vano and Niko was performed at the Platonov Festival.

The Shota Rustaveli State Academic Theater (Georgia) brought the play Vano and Niko to the Platonov Festival in Voronezh. The production of famous director Robert Sturua was shown on June 12 and 13. This theater came to the capital the Black Soil Region for the first time.

The production was based on a play written by Robert Sturua himself based on the stories and parables of Georgian writer Erlom Akhvlediani.

– These are very interesting stories about two people – young and sometimes old. In the stories, an absurd technique is used, which was fashionable at the time - just as Ionesco and Beckett wrote. They are about the complex relationship between good and evil. About how sometimes good is lazy and disgusted to be good because it is sick of everyone and wants to become evil in order to make its way. And evil got sick of being evil and wanted to become good. And so they switched. Then the good, which had become evil, wanted to return to being good, but it was impossible. But in the end, there is sort of an ironic happy ending, – Robert Sturua said at a press conference prior to the performance. 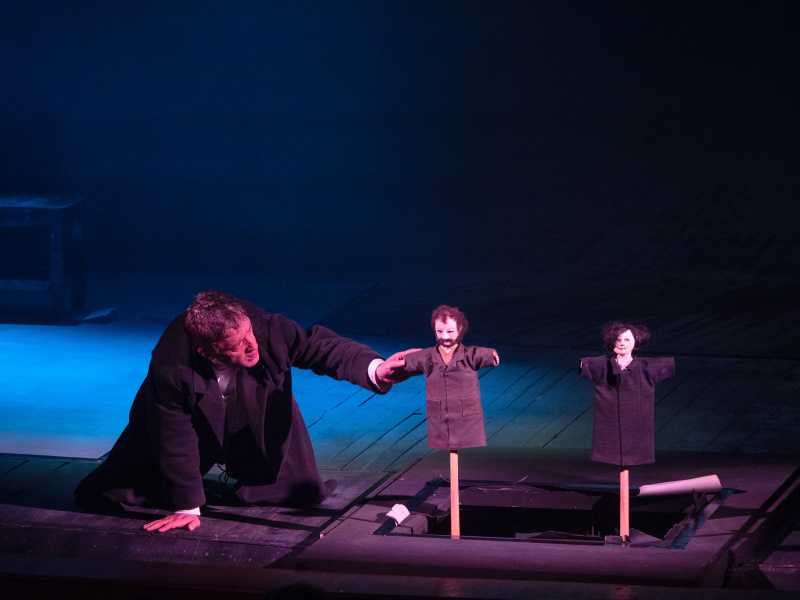 From the very beginning of the performance, viewers were warned that everything that was happening might be a dream. Characters fall asleep from time to time, discuss how they have ended up in each other’s dreams, they quarrel while being in the dream, reconcile, fight, fall in love, get married and return debts. The boundary between a dream and reality, as well as between good and evil, is blurred in the characters of Sturua’s play. Evil Niko demands more and more sacrifices from the good Vano: first, he asks him to give him a candle, a hat, then his beloved one, his love for her, his life. “We are friends,” – Niko says, and the good-natured Vano cannot resist him. 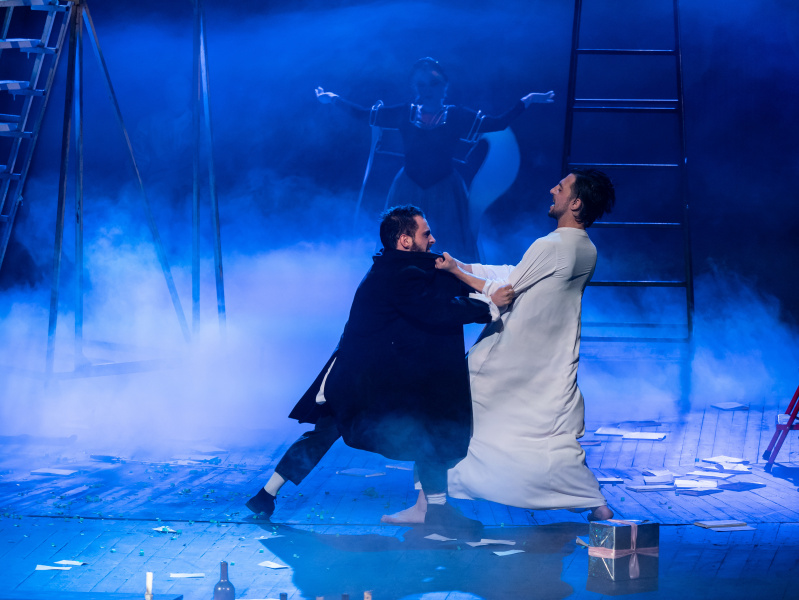 – The play is both sad and cheerful, it is a glance at our present with humor when everything good and evil is so mixed up that it is not clear where what is. I wanted to remind of some everlasting things that do not change depending on our squabbles and political conflicts. In general, I believe that good people should not betray their good purpose, should not compromise. But life is complicated. Many people from my circle, my friends, had committed acts that I did not expect from them. I forgive them. When I was young, it was hard not to say anything. However, as I grew older, I began to get a better understanding of life, I myself had to make complicated deals with my conscience. When you commit a wrongdoing, there is always a danger. You open some kind of crack and enter a place from which there is no return, – Robert Sturua noted. 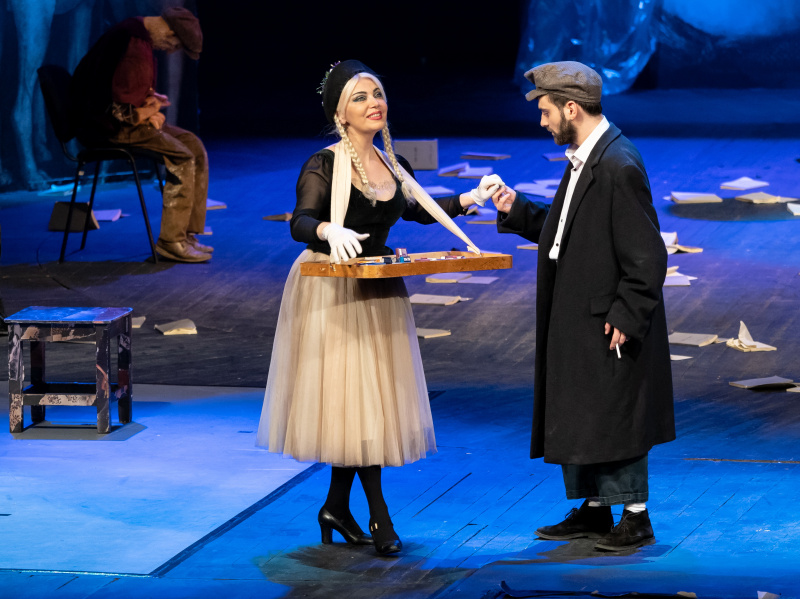 Only four artists talked about deals with conscience, self-sacrifice in the name of friendship, and love and loss on the stage. The absurdity of “Vano and Niko” was not only in the very text of Erlom Akhvlediani, but also in other details created by Robert Sturua: a quick change of scenes, role-exchanging characters, strange lines not related to the main plot. Instead of mountains, the characters conquered high ladders, and after dying from a gunshot, they immediately resurrected just to run somewhere again. This confusion, the poetic chaos of the performance, on the one hand, seemed to be the embodiment of the creator’s frantic fantasy, and on the other hand – the metaphor of life itself, unsteady and inconsistent within any framework or definition.

– Whether the play ends well or badly, nothing will change for the viewer. Any person will think about any performance a maximum of 10 minutes before bedtime and will continue his sinful or sinless life. Nothing depends on us. We can create a very small public opinion, add a fraction to healthy and normal people. But you shouldn’t hope that we can change a person. I have no such illusions. Art, in general, has such an effect that you fall into the wave of a person who has created this art. For example, you yourself become against evil. But when you come home, there is a fallback from all this. You go to bed with your wife or girlfriend or alone. And 10 minutes before falling asleep, you slowly begin to forget what you saw. In this case, a good ending or a bad one — it doesn't matter. I myself like happy endings as a viewer. I understand that it is ironic, that it does not happen in life. But it’s more pleasant for my heart to see that everything has ended well, – Robert Sturua said. 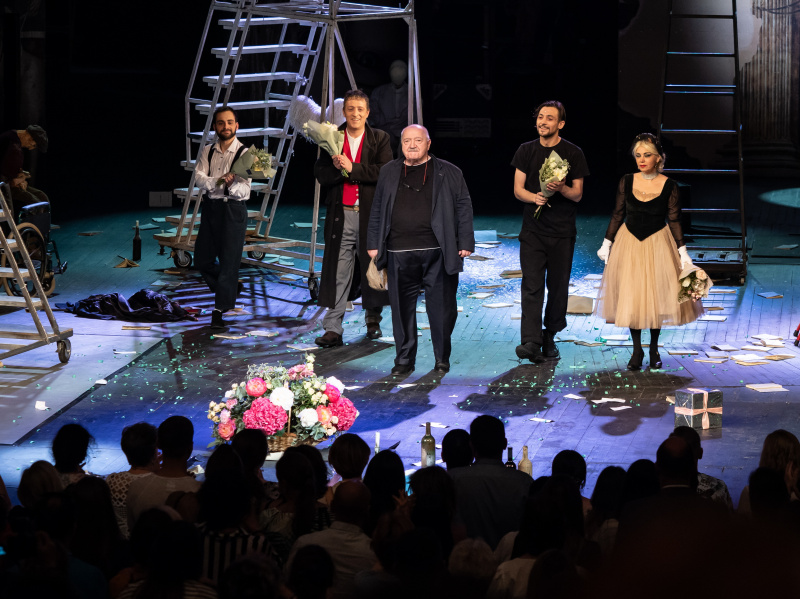 The performance of the play Vano and Niko was held in Voronezh as part of the cooperation between PlatonovFest and the Chekhov International Theatre Festival.