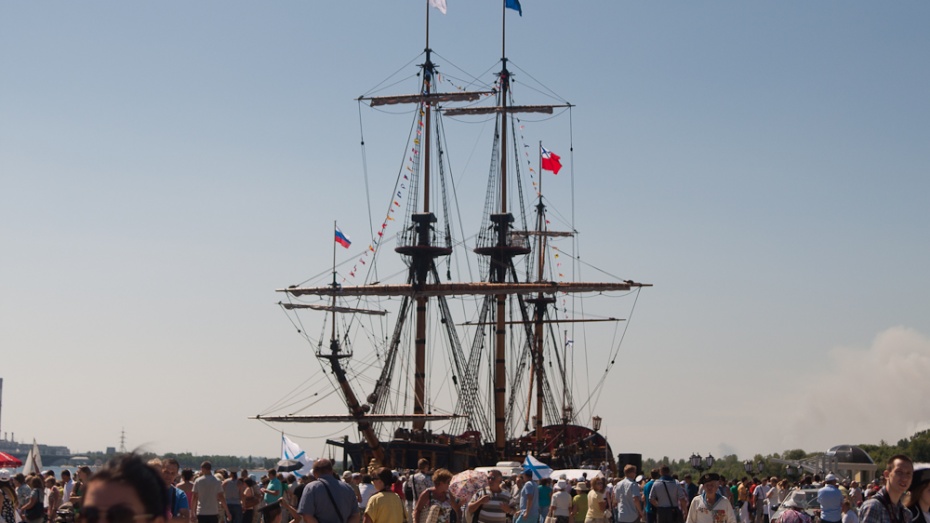 The battleship made her short maiden voyage after the consecration.

Today, July 27, the ceremonial opening of museum ship “Goto Predestination” was held in Voronezh within the Russian Navy Day. Voronezh and Liski Metropolitan Sergiy consecrated the ship after a solemn service at Uspensky Admiralty church.

Hundreds of the city people gathered at Admiralty Square to see how the battleship went on her maiden voyage. The spectators began to gather long before the museum ships’ opening ceremony, from about half past nine in the morning.

After the battleship consecration ceremony the regional head Alexey Gordeev and director of Pavlovsky shipyard Nadezhda Marinkina smashed a bottle of champagne on the ship’s board. In honor of the grand opening of “Goto Predestination” a gunfire was given from the ship, and the organizers saluted from Admiralty Square. After that, colorful balloons flew into the sky.

- Every Russian navy sailor knows that Voronezh is the cradle of the Russian Navy. Peter decided to build his fleet here, and 250 ships of various types were launched from Voronezh shipyards for 15 years, - Alexey Gordeev said. – “Goto Predestination” was the first ship of the line, which was built by Russian masters only. When we decided to build a replica of the battleship and held a tender, German and Danish shipbuilders wanted to participate in the project, but it was decided that the modern “Goto Predestination” would be built by Russian craftsmen, like the Peter’s ship. The shipbuilders from Pavlovsk and Petrozavodsk studied a heap of historical documents during these three years, and the engineers found a way to combine the Peter’s times traditional and modern technologies in one ship. This unique ship reminds us that Voronezh is the cradle of the Russian Navy.

The maiden voyage of “Goto Predestination” was quite short - the battleship rounded the island on the reservoir and returned.

- The museum ship’s route is very short, because the reservoir’s bottom has not been investigated due to the power lines - the 38-meter mast can not go under them, - the ship’s captain Igor Koldunenko said.