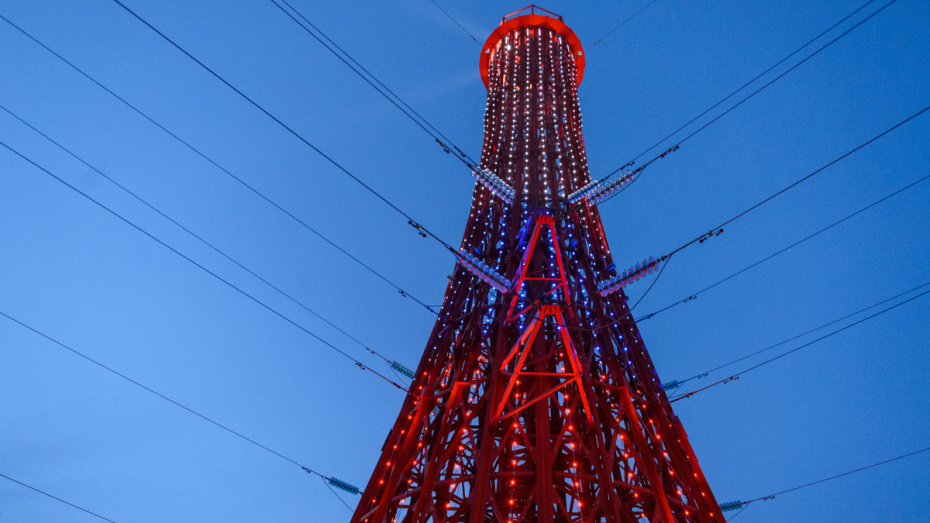 The ETL tower on the left bank will become a new urban art object.

The stylized “Mayak” (Lighthouse) ETL tower on the left bank of the Voronezh Reservoir was officially commissioned on Wednesday, February 5. The first lights on Mayak were lit by Governor Alexander Gusev and Pavel Livinsky, Director of the Rosseti Company.

Mayak became a gift to Voronezh from Rosseti. The power industry decided to make the next ETL tower an art object. The concept of the stylized tower was developed under the company’s order by famous Voronezh architect Roman Pupavtsev, the author of the Green Theater and the reconstruction project of Sovetskaya Square.

The 46-meter-high structure is made of red galvanized metal. The foundation of the tower stands on 55 piles. Its manufacturing required 18 tons of iron. The installation of support elements took 3.7 thousand kg of bolts, washers and screw nuts. Three spotlights at the top of the pylon mimic the rays of a lighthouse aimed at the right bank. Along the body of the “lighthouse”, there are garlands that will be turned on on holidays.

There is a steering wheel with an interactive screen installed next to the tower. The steering wheel controls the camera, which allows looking at the city sights. On the screen, one can open an interactive map of Voronezh and find out the weather forecast. The device has a slot for charging a smartphone and an outlet for contacting emergency services.

“This year we will launch the improvement of the left-bank part of the reservoir’s embankment, there will be a recreational and sports zone here. I think the “Mayak” will become another point of attraction that will decorate our city and will fit well into the concept of the new embankment. Voronezh deserves to have its own lighthouse. We are the capital of the Russian Navy. Moreover, we will have two lighthouses. Next year we will launch the improvement of the right-bank embankment, and it will also have a lighthouse. Thus, everyone who comes to Voronezh will follow the right course,” Alexander Gusev noted.