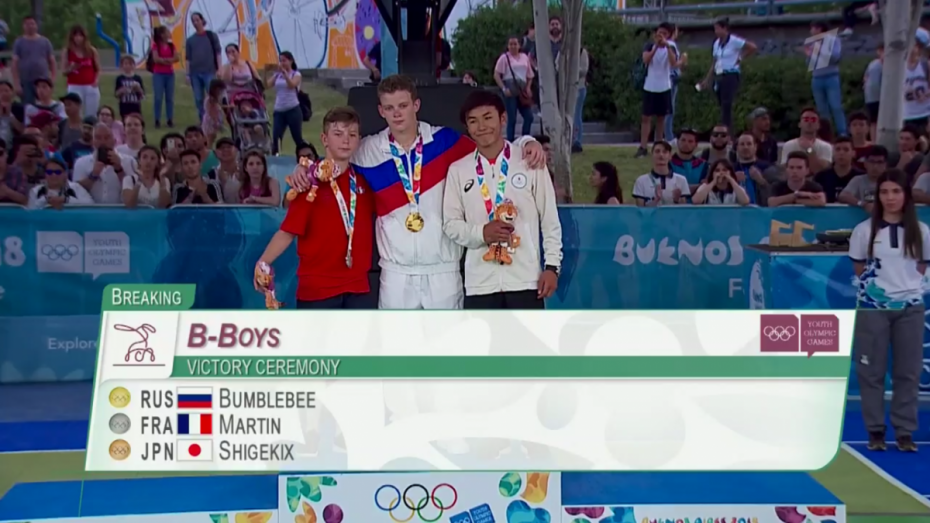 Sergey Chernyshov defeated a Japanese and a French athlete in battles.

Voronezh dancer Sergey Chernyshov performing under the nickname Bumblebee won the gold medal at the Third Summer Youth Olympic Games in the Dancesport category (breakdance) on Monday, October 8. The youth Olympics involve athletes from 14 to 18 years of age. They are held once every four years. In 2018, they were hosted by Argentine capital Buenos Aires from October 6 to 18.

18-year-old Voronezh resident became the first breakdance champion in the history of the Olympic Games. This dancesport was first included in the competitive programme at the 2018 Youth Olympics.

The competition consisted of battles involving two athletes. Each of them, in turn, demonstrated dance elements many of which looked liked complex acrobatics.

In the semifinals, Sergey Chernyshov competed against the frontrunner of all qualification rounds – a Japanese dancer performing under the nickname Shigekix. The Voronezh resident won three rounds out of four.

In the finals, Chernyshov was competing for the gold against 16-year-old French dancer Martin. Sergei won in all final rounds surprising the jury with the most complex self-designed elements.

– Actually, the most important battle was the one with the Japanese dancer, in the finals I was already at ease. I’ve never defeated this Japanese guy, today’s the first time. The time has come to do it, and I broke him. I felt the power inside to do it – some kind of energy from performing for Russia. I felt nervous, but since I’m an optimist, I managed to suppress the worriment in me. All was decided in the exchange of glances before the battle. I couldn’t afford to shame myself when performing for my country. My opponent is my friend, we’ve been in touch since 2013, but today there was no place for friendship. I stepped into the battle as if I was going to war, - RIA Novosti quotes Sergey Chernyshov.

Sergey Chernyshov has been breakdancing for nine years under the supervision of his father, one of the founders of breakdance in Voronezh. He is a multiple times winner of Russian and international competitions. Sergey has participated in the “Tantsy” (Dancing) TV project on TNT Channel.