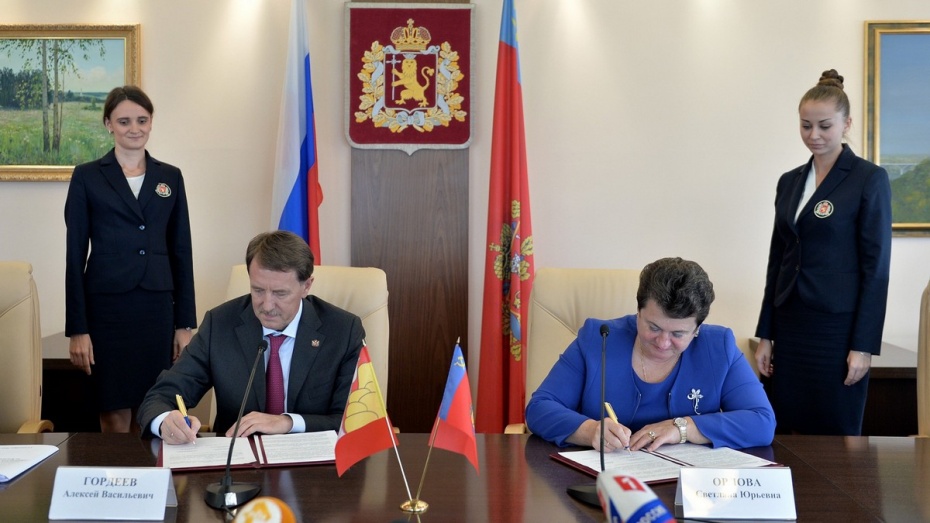 The authorities have planned to double the turnover for three years.

The Voronezh Region Governor Alexey Gordeyev signed a cooperation agreement with the Vladimir Region Head Svetlana Orlova on Tuesday, September 13. The regions will cooperate in the fields of trade, industrial production, business, science, education, health, culture, sports. The agreement will help the regions to expand the existing relationships and to establish new ones.

According to the Voronezh Region Head Alexey Gordeyev, the regions have a long history of cooperation on the level of military-industrial complex, but the “huge potential – interfarm and cooperative ties between enterprises and the regions – remains untapped. Given that Vladimir takes the leading positions in the mechanical engineering industry, there is a prospect of cooperation within the cluster for the production of equipment for oil and gas companies, which was established in the Voronezh Region, Alexey Gordeyev noted.

The agreement will allow to develop trade and economic relations of the regions, organize the delivery of products for industrial purposes, food and consumer goods.

- Sometimes, the companies lack basic information borrowed from each other in order to compete in the markets. Today, our regions’ turnover is about 4 billion rubles, we aim at least to double this amount in three years. There is such a possibility, Alexey Gordeyev said.

The Voronezh and the Vladimir regions will also collaborate in the development of agriculture industry and staff training for this field. In addition, the Voronezh Region can become a supplier of agricultural products: sugar, sunflower oil and grain.

The Vladimir Region Governor Svetlana Orlova called engineering (in particular aircraft manufacturing), pharmaceutical manufacturing and the tourism industry the priority areas of the future cooperation. Orlova noted that the agreement will help the regions to strengthen ties in the business community.