By entire village. How Voronezh craftswomen made huge carpet from clothes for holiday 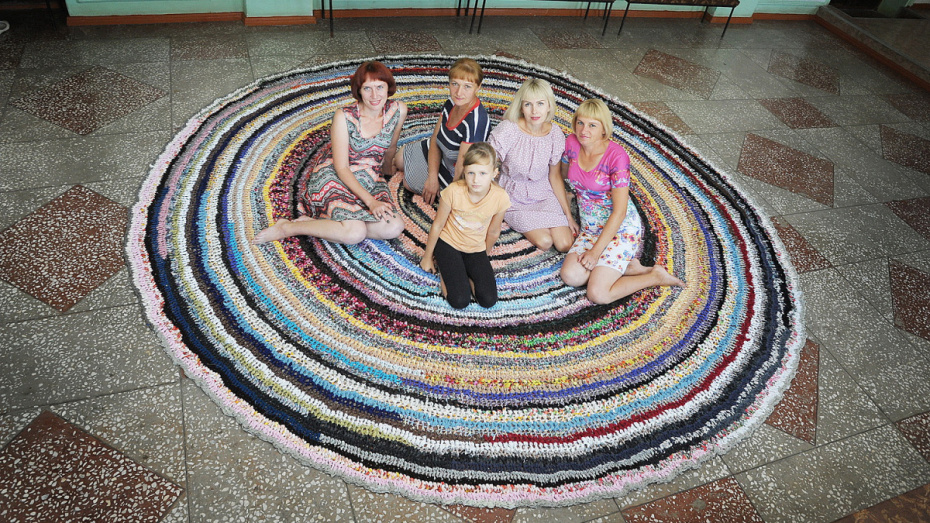 Employees of the KDC in Krivonosovo want to be included into the book of records.

Employees of the Krivonosovo Culture and Recreation Center (CRC) of Rossoshansky District have knitted a round carpet with a diameter of 448 cm out of the villagers’ old clothes in two months. The miraculous carpet is supposed to become the brand of the “Kartofelny Razgulyai” Festival, which will be held on in Krivonosovo October 5. The craftswomen expect that the gigantic product will be included in the Russian Book of Records. To learn how it was created and how it all began, read the RIA Voronezh article. 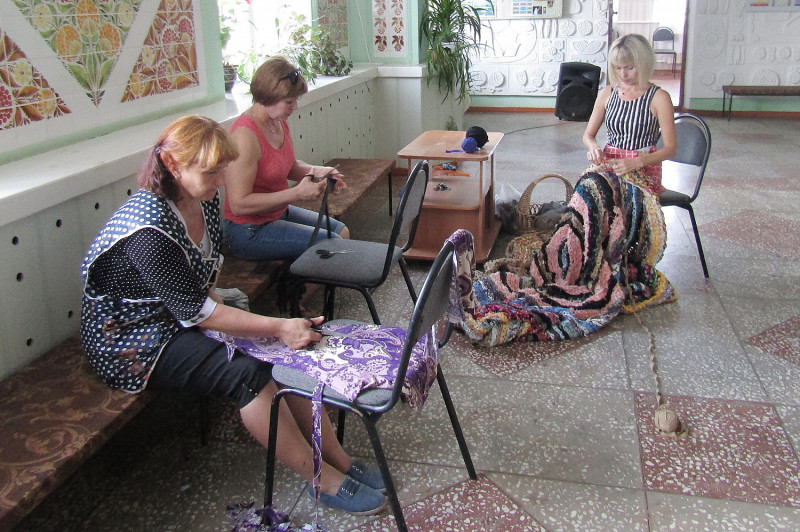 Craftswomen from the village of Krivonosovo constantly come up with something unusual. For example, in 2014, a local hospital nurse, Valentina Levchenko, baked a cake in the shape of a hospital building weighing 33 kg and a size of 160x115 cm. A year later, employees of the local CRC made a giant pancake with a diameter of 85 cm for the Maslenitsa Festival.

And here is another piece of Krivonosovo creativity. The creation of the carpet involved CDC employees – activists of the local community board "Studenok" Vera Zueva, Yelena Kaltygina, Yelena Chubova, Yelena Semenenko, Tatyana Dudnikova and Natalya Tkacheva.

The idea came after Yelena Kaltygina held a workshop in Rossosh on the almost forgotten carpet weaving technique on June 12, 2019: a rag is cut into narrow stripes 1-3 cm wide, wound into balls, and then the fabric is tied with hooks on the outer side of the rug, with each new layer expanding the carpet. This way one can make not only rugs, but also furniture shams and napkins. 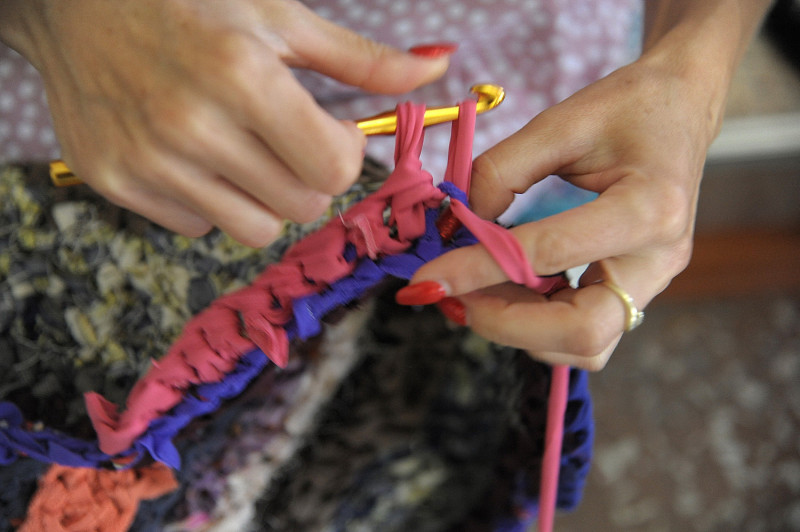 Rossosh residents were very interested in the technique, of which Yelena informed her colleagues after she came back. So they decided to make a carpet for a holiday together.

– Even half a century ago, almost every house in our village had craftswomen who knitted carpets this exact way, – said Yelena Kaltygina. – Today there are only a few of them. I took a rug knitted by my mother Galina Vasilyevna about ten years ago, looked at it and thought that something bigger could be made for the “Kartofelny Razgulyai” Festival. The diameter of what my mother made is also hefty – about 150 cm, but we talked with our colleagues and decided to make something bigger with our own hands.

The craftswomen spread the word around the village that they were collecting old clothes. 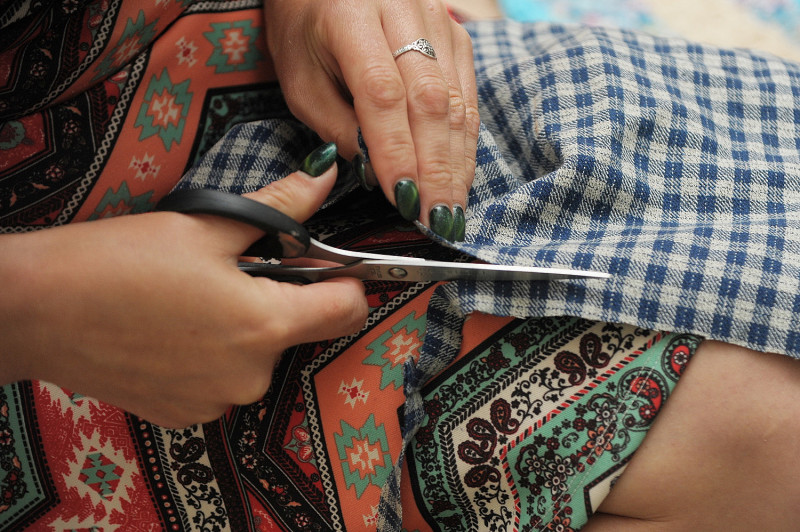 The CRC employees cut out about 1.9 km of strips 1-3 cm wide, which were tied together with knitting needles and hooks.

Yelena Kaltygina brought the started rug, at the time with a diameter of just over one and a half meters, to Voronezh on June 29 as part of the district delegation. The Day of Culture of Rossoshansky District was held at the venue in front of the Green Theatre. And the residents of the regional capital also showed interest in the product: they came up to it, took pictures, participated in Yelena’s short master-class.

– All this was taught to us by our grandmothers and great-grandmothers during our childhood, – Vera Zueva said. – No one could have imagined that this rug would have such success with the audience, and so we could not stop, instead increasing and increasing its size.

It was assumed that no one would see the finished product before the holiday, but they made an exception for RIA Voronezh journalists. 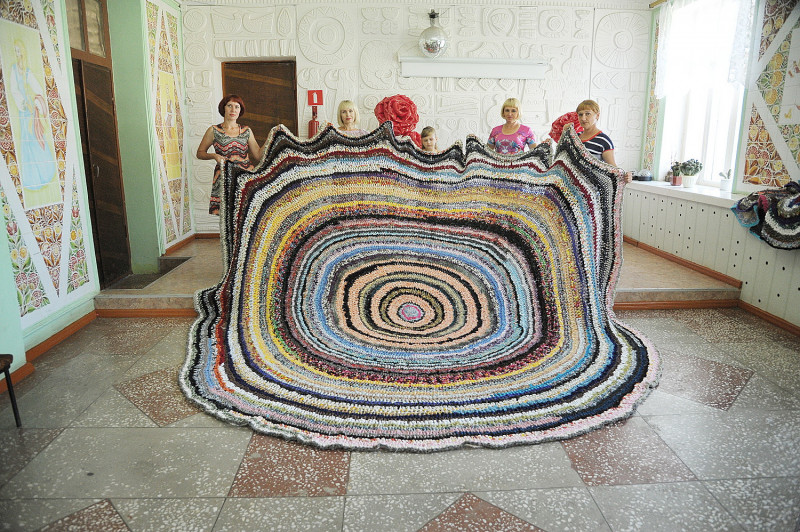 While working on the carpet, the girls had a division of labor – most of them cut rags into strips and wound them into balls while Yelena Kaltygina knitted them it with a wooden hook, which she had inherited from her grandmother.

– At first, all of our fingers ached from the scissors, – Yelena Chubova recalled. – The metal quickly grew dull, and we constantly sharpened them with ordinary thick needles. It is very simple – you take a needle and sort of carefully try to cut it with scissors. This friction makes them sharper.

The most difficult stage of work, according to the craftswomen, began when the diameter of the carpet exceeded 300 cm. It became increasingly difficult to turn it for knitting, and after some time it simply did not fit into the office of the director of the Krivonosovo CRC. So the product had to be taken out into the corridor. 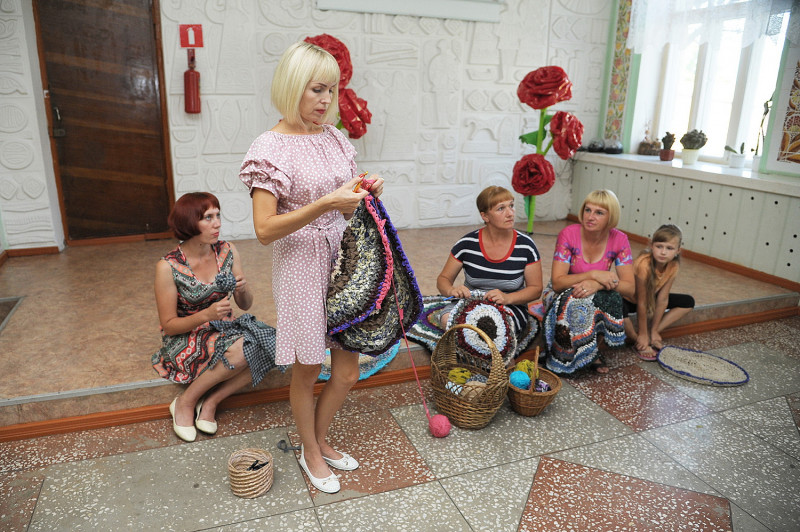 – In total, there are about 30 different colors in the carpet, and it weighs more than 12 kg, – Yelena Kaltigina told the guests about the carpet like a guide about the sights. – This part is knitted from my husband’s old T-shirts, to the left is a part of his old shirt. A little further there are parts of my neighbor’s dressing gown. The carpet was made by the entire village! Now it needs to just lie for some time and take on a perfectly smooth shape. Of course, it could be expanded again and again, but we need to prepare the events for the “Kartofelny Razgulyai” Festival. I’ve surfed across the entire Internet, but nowhere did I find a rug of the same size made in this technique. I think it will make it into the Russian Book of Records if not in the Guinness Book of Records! 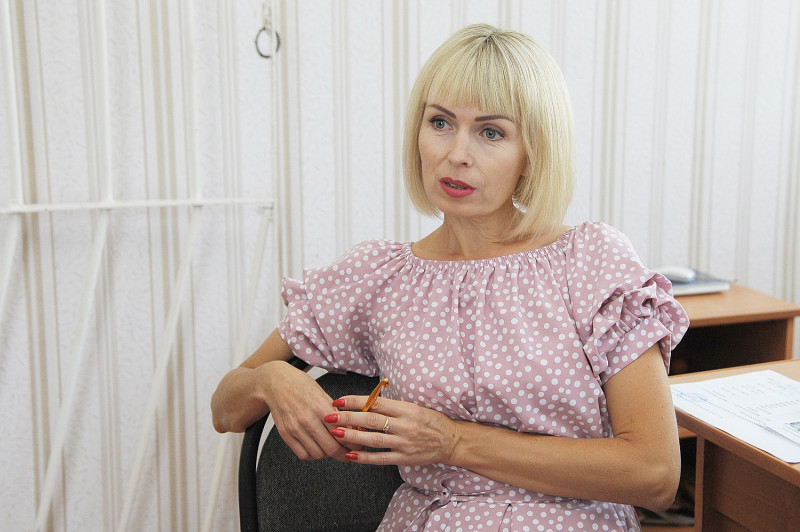 After the unusual product was created, many Krivonosovo residents began to take interest in the possibility of opening a children's club in the CRC for learning this carpet knitting technique. The next plans of the CRC include conducting classes in a group so far roughly called "Grandma’s Rug" two to three times a week.

– It is important to us that the technique mastered by our grandmothers did not sink into oblivion, but was passed on by our children, – Yelena Semenenko stressed.